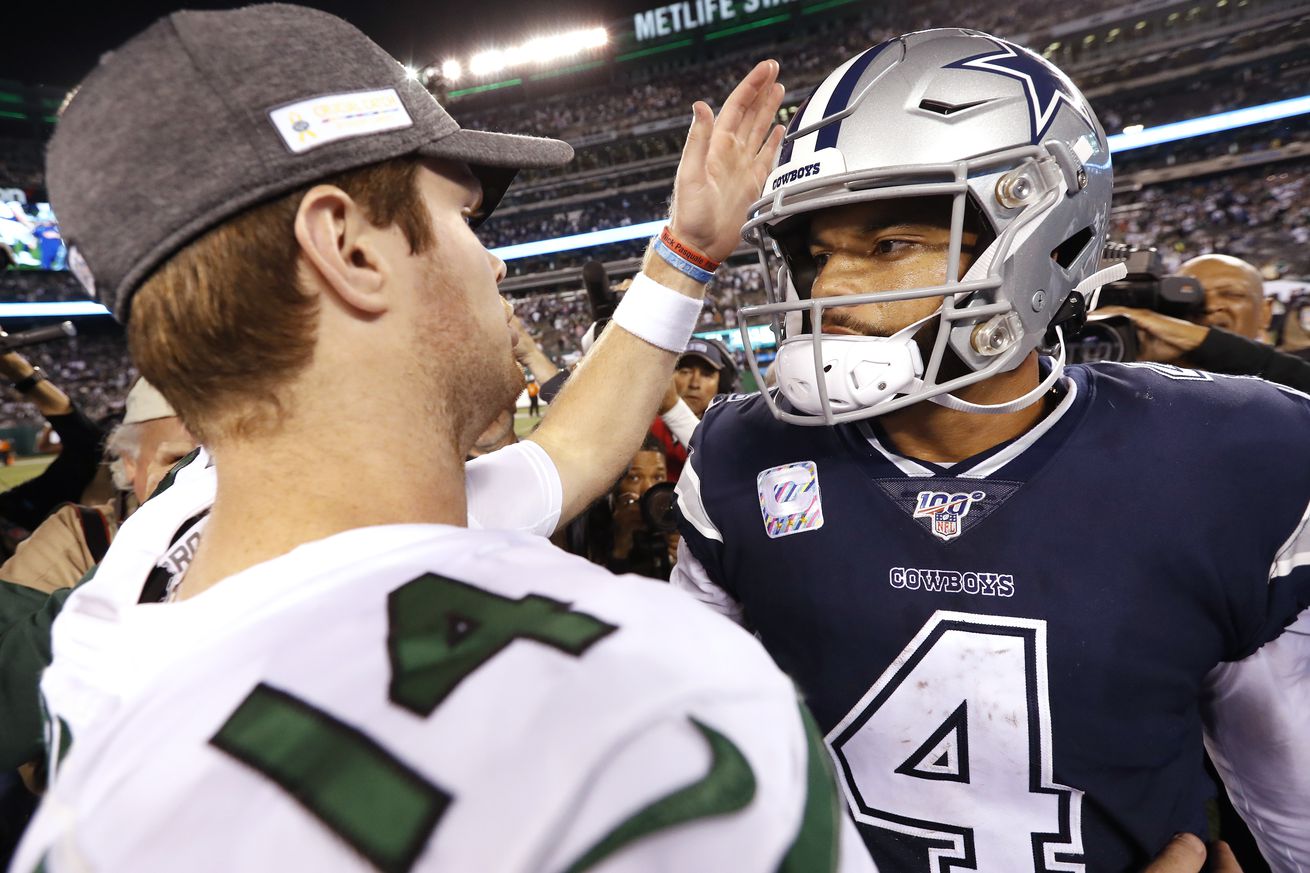 The Cowboys loss to the Jets was a rough one.

Well, that happened. After losing two tight games to good teams, the Cowboys went on the road and lost a tight game to a bad team. Not just a bad team, but the previously winless Jets, a team so bad that it has sparked legitimate chatter about whether they should fire their head coach after his first year with the team. That’s who Dallas lost to. It wasn’t any one thing, but here are five plays that played a huge role in the embarrassing loss.

On the Jets’ second drive of the game, their offense started moving the ball well. Sam Darnold was airing it out and Le’Veon Bell was getting short amounts of yards that moved the chains. New York got the ball down inside the 10 yard line and, right on schedule, the Dallas defense suddenly stiffened up.

Facing third and goal from the seven, Darnold was forced to scramble with the ball. Maliek Collins brought him down at the four-yard line, bringing up a fourth down and potentially limiting the Jets to just a field goal. Except not really, because Collins was flagged for a horse collar tackle, giving the Jets a first and goal at the two. A pass interference penalty on Byron Jones on the next play moved it up to the goal line, and the Jets got a touchdown.

Strange playcall on fourth down results in no points

Down 7-3 and with the defense having forced two consecutive three-and-out’s, the Cowboys offense was putting together the long, methodical kind of drive that they did with ease in the first three games of the season. Then they failed on a third and one on the Jets’ own six-yard line.

In less than 90 seconds of real time things changed drastically for the Cowboys against the Jets.

Their failed fourth down conversion (where they could have gotten three points… in a game they’d lose by two) turns into a quick Jets touchdown. Huge swing. pic.twitter.com/YRWxBuKWZP

Jason Garrett decided to go for it on fourth and two, which for the record is the analytically sound thing to do in that situation. Kellen Moore then drew up a strange looking call that had Dak run out to his left to get it, and the play was blown up and dropped for a loss. It was the right decision to go for it, but not the best play to call there. To make matters worse, the Jets threw a 92-yard touchdown on the very next play. It was pretty much all downhill from there.

The third quarter Cowboys are undoubtedly the best Cowboys, as Dak and the offense started moving downfield with relative ease. Powered by Ezekiel Elliott, who ran it nine times on that drive for 33 yards, the Cowboys were suddenly looking at third and goal from the four.

Dallas ran a fairly simple rub route that got Jason Witten open just enough for Dak to hit him in the flat for a touchdown. But flags were thrown and Cedrick Wilson, who had an impressive day otherwise, was called for setting a pick. On the replay, it seemed to be a very poor call. Nonetheless, points got taken off the board and Dallas had to settle for a field goal after failing to score from 14 yards out. Instead of the score being cut to a one score game, the Jets remained up 21-9.

Through the first half, the Cowboys’ best player was Brett Maher, who had accounted for all six of the team’s points after drilling a 62-yard field goal right before half. The fact that the inconsistent Maher was the lone bright spot said everything anyone needed to know about this game.

But it didn’t last. Still down 21-9 and failing on third down in the red zone yet again, Maher trotted out for a 40-yard field goal to at least give the Cowboys something to show for the 10-play drive they had just put together. Naturally, Maher missed it, and it resulted in another drive that failed to score anything. When the Cowboys scored late in the game and had to go for two just to tie the game, that miss suddenly started hurting even more.

The Cowboys are extremely efficient at heartbreak, so of course they managed to storm back and make it a winnable game, just like last week, and of course they fell just short. On third and two from the New York eight, Dak ran a QB draw and hustled his way into the endzone, leaving just the two point conversion to tie it up and force overtime.

When the Cowboys lined up, the Jets showed an aggressive blitz, which they had been doing all day. Rather than calling a timeout to make an adjustment, they snapped the ball and Dak had to get it out quickly. The result was a rushed pass to Jason Witten over the middle, thrown before he was ready, and it fell incomplete. Game over, losing streak extended to three. But at least it wasn’t a blowout?