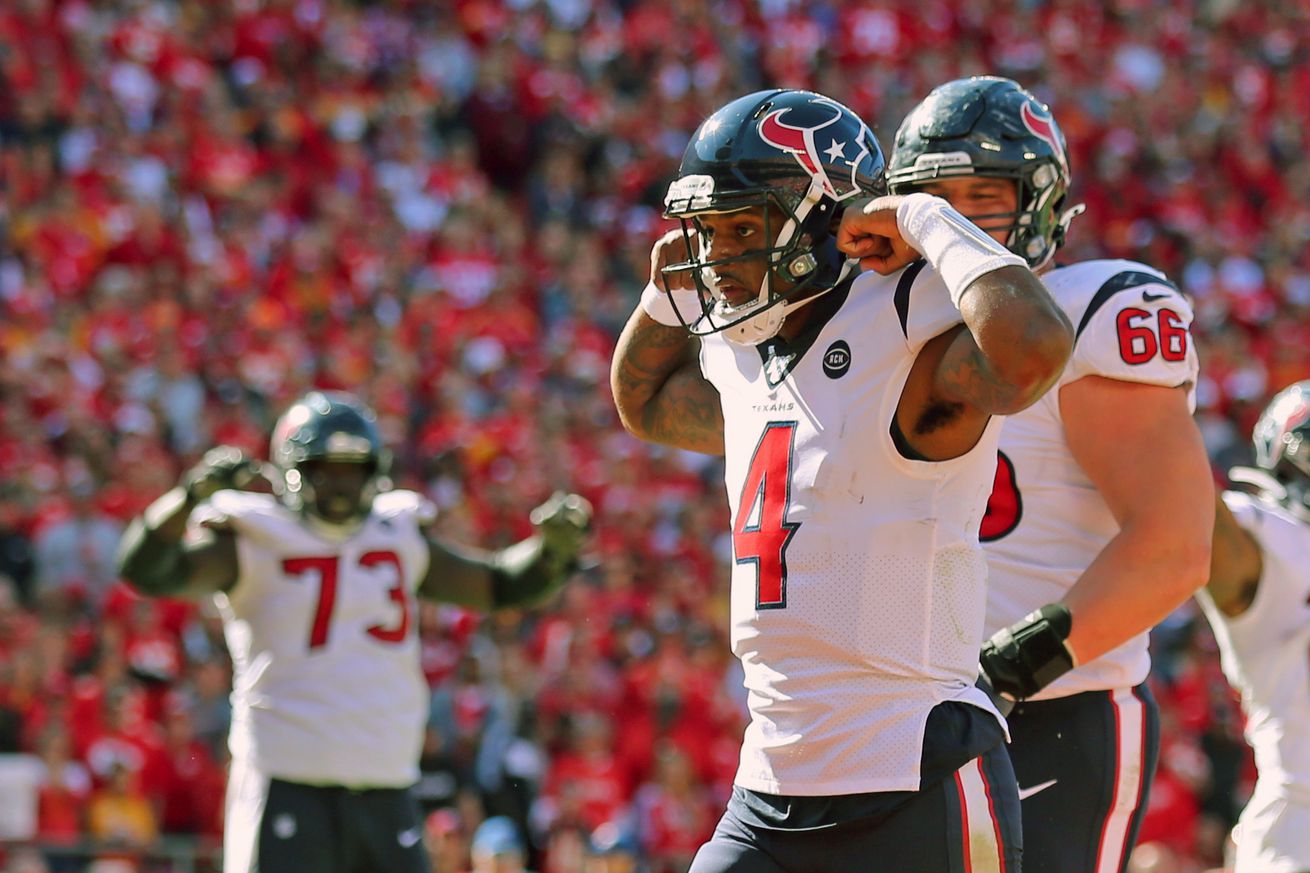 Check out our wrap up of Week 6 in the NFL.

We’ve reached Week 6 of the 2019 NFL Season. This weekend we saw some entertaining matchups, headlined by the Houston Texans taking on the Kansas City Chiefs and the San Francisco 49ers taking on the Los Angeles Rams. The week also featured a Monday Night Football matchup between the Detroit Lions and Green Bay Packers that had an extremely controversial finish.

Coming out of Week 6 we still have two unbeaten teams. The New England Patriots and the San Francisco 49ers. Let’s jump into our recap of Week 6 with a list of final scores.

The formula for the Houston Texans is pretty simple. When they protect Deshuan Watson, they are an extremely hard team to beat. For the second straight week Watson was not sacked, and the Texans came out with a victory. In Watson’s career when he is not sacked in a game the Texans are 7-0. Watson was helped out on offense by a big day on the ground from Carlos Hyde. The former Ohio State Buckeye rushed for 116 yards and a touchdown on 26 carries. On the defensive side of the ball the Texans were able to limit Patrick Mahomes to just 275 yards passing and a QBR of just 61.8. They also held the Chiefs to just 53 yards rushing on the day, an extremely impressive mark. The Texans have proved over the past two weeks they can compete with anyone in this league. When he is not running for his life every play, Watson can tear a defense up in different ways. He ran for 42 yards on Sunday and threw for another 280. He clearly is one of the most dynamic players in the league, and Houston can be very dangerous if their offensive line continues to play well.

The shake. The twirl. The TD.

After five games I am now fully convinced, the San Francisco 49ers are for real. San Francisco had a huge match up this weekend traveling to Los Angeles to take on the Rams and Sean McVay’s team proved no contest. The 49ers dominated the Rams all day long, eventually finishing with a 20-7 victory. Jimmy Garoppolo, as he has all season long, didn’t have a great day, but was just good enough to not lose the game for his team. Garoppolo threw for just 243 yards and no touchdowns, had a QBR of 59.4, and the 49ers still won by 13. Despite being the best rushing team in the NFL coming into the game, the 49ers rushed for just 99 yards total on Sunday. So you’re probably asking yourself how did San Francisco win this game? The answer is their outstanding defense. San Francisco held Rams quarterback Jared Goff to 78 yards through the air, the lowest of his career. Goff had a QBR of 1.1. Yes, you read that right, 1.1. Overall the Rams mustered up just 157 yards of total offense and scored their only touchdown on a run by wideout Robert Woods. Missing Todd Gurley clearly hurt the Rams’ offense, but we can’t ignore how impressive the 49ers’ defense was. Starting 5-0 is not a fluke. The 49ers are a very good football team and will be one of the clear top NFC contenders this season.

Another huge stop as the defense holds the Rams on 4th & 1 #BeatLA pic.twitter.com/WTd0t99BTz

When Drew Brees went down against the Los Angeles Rams in Week 2, how many people would have thought the Saints would be 5-1 four weeks later? Not me, but that is exactly what the Saints did. New Orleans won once again Sunday defeating the Jacksonville Jaguars 13-6. Teddy Bridgewater wasn’t fantastic, throwing for just 240 yards and producing a QBR of 40.8, but he did just enough to lead his team to victory. For the second time in the past two weeks the Saints’ defense was the story of the game. New Orleans held Jacksonville to just 226 yards of total offense, 75 yards rushing and 151 passing. Stopping the run is a big key to beating Jacksonville and New Orleans did just that. The Saints had 18 first downs in the game to the Jaguars 10 and were able to keep rookie quarterback Gardner Minshew off-balance all day. By winning four straight the Saints have given themselves an ability to not rush Brees back and let Bridgewater keep playing until he gets fully healthy. New Orleans has a tough matchup at Chicago next week, but after that has three games they should win. They could easily be 8-2 or 9-1 nearing Thanksgiving and have a healthy Brees returning. That is dangerous for the rest of the NFC.

Teddy tosses it up
Cook hauls it in #Saints lead | #NOvsJAX pic.twitter.com/AHQ3jdQfjP

Elsewhere Around The NFC East

The Eagles suffered a big loss on Sunday falling to the Minnesota Vikings. Kirk Cousins continued his dominance over the Eagles throwing for 333 yards and four touchdowns. The Philly secondary was an absolute mess. They were getting beat on almost every play and Stefon Diggs made them pay catching seven passes for 167 yards and three touchdowns. Philly lost a chance to move into sole possession of first place in the NFC East Sunday and now their match up this weekend with the Dallas Cowboys will determine who leads the division. If the Eagles do not do something to desperately fix their secondary they are going to have a hard time beating teams with any passing attack.

The Giants played the New England Patriots tough last Thursday, for one half. New York trailed just 21-14 going into halftime, but the Patriots shut them out in the second half and went on to add two touchdowns of their own, winning 35-14. The Patriots played one of their sloppiest games in recent memory, but still were able to do anything they wanted against the Giants’ defense. Daniel Jones struggled leading the New York offense, throwing for just 161 yards and three interceptions. Despite the loss, New York has a winnable game this weekend as they face the Arizona Cardinals at home.

The Washington Redskins beat the Miami Dolphins by one point on Sunday. That tells you all you need to know about their team. Washington faces San Francisco this Sunday where they will fall to 1-6 on the year.