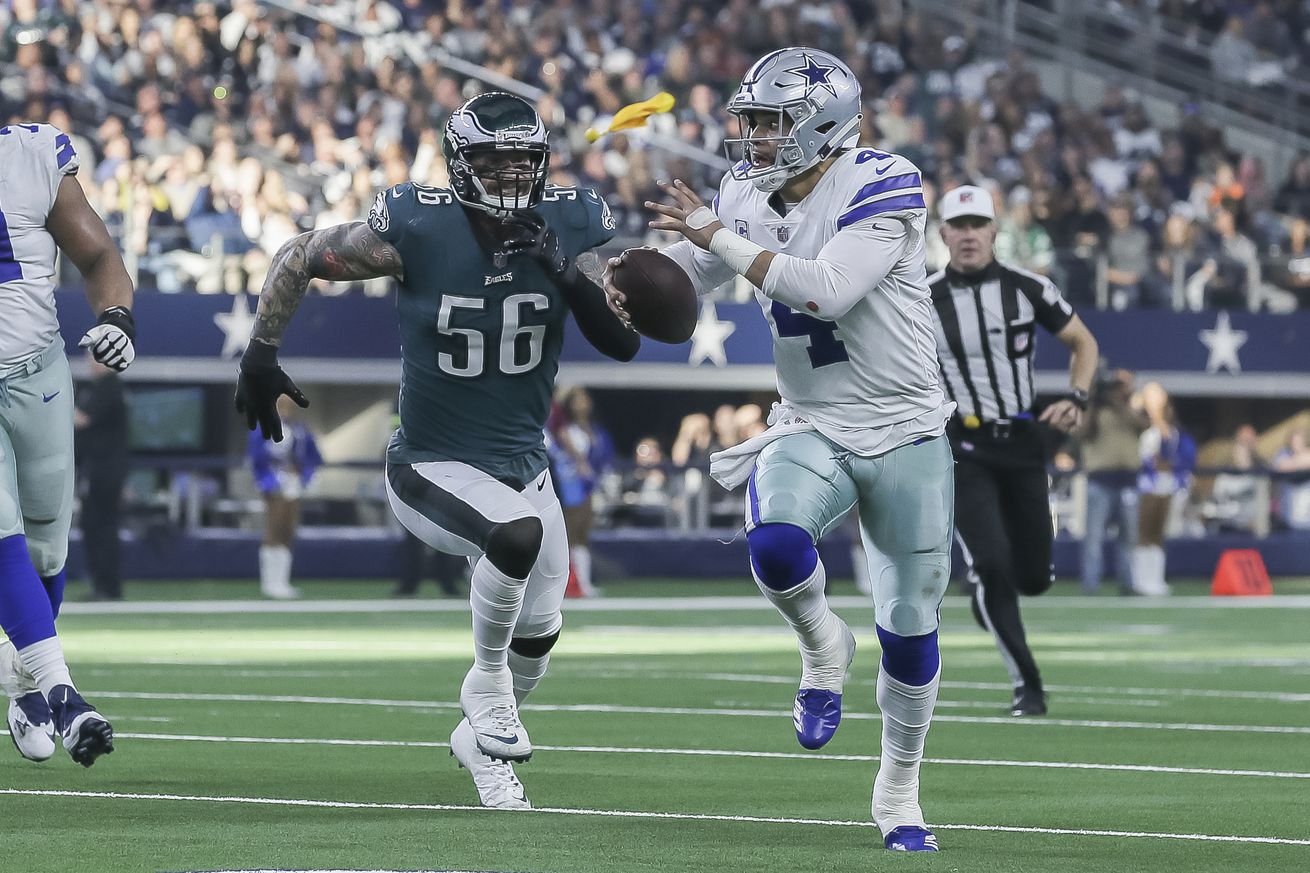 This season is poised to go one of two ways on Sunday. Let’s examine some crucial factors that will help determine the path.

The Dallas Cowboys now face a must-win game against the Philadelphia Eagles. If you don’t believe me, then maybe you will believe the numbers. With so much hanging in the balance, there is a lot to think about.

Football is a game of luck and bounces, more so than any other sport. While that may sound like an unsupported statement, it actually is very real, because there are so few games played in football versus other sports, so happenstance and bad plays have a magnified impact on a team’s failure or success.

What is undeniable is that the Cowboys are just a handful of missed opportunities away from being 4-2, 5-1, or even 6-0.

Had either Jason Witten or Ezekiel Elliott avoided fumbling the ball, the Cowboys could have beaten the New Orleans Saints.

If Amari Cooper had not turned his head to look upfield and let the ball carom into Jaire Alexander’s waiting arms, the entire course of the Green Bay Packers game would have changed, and Dallas might have been able to take control.

Had several of the receivers hung onto the ball instead of dropping it, the New York Jets game would probably have gone a different way.

But wait. There’s more. How about the times a Cowboys defensive back has let an easy pick clank off the old mitts? And Brett Maher could have made up the difference in the score in two of the games if he had hit all his kicks. What if the defense hadn’t had a complete breakdown on the 92-yard touchdown throw from Sam Darnold?

Fans are feeling despair because they have seen three consecutive losses and think the Cowboys are a trash team, but two of the losses were by just two points.

This team is really much closer to getting over the hump than you might think, but that depends on one key thing, which they have hardly proven they can manage. And if they don’t, being close to good means diddly.

It’s time to stop blowing holes in their own feet

The players have expressed the belief that these losses have come largely from self-inflicted wounds.

Well, it is hard to argue that point. Almost all of those examples of plays that could have turned a game around involve a mistake or blown assignment by the team, individually or collectively. Bad execution has played its role this season. There have been far too many plays where yards and points were left on the field, or just gifted to the other team, because of an individual or group failure by the players.

That, however, does not give the coaching a free pass. That is another kind of mistake, and it is impossible to discount the role play-calls and schematic flaws have had in the losing streak.

We are all familiar with the maddening return to a conservative first down approach by the offense. There is also the glaring issue with the run defense that was big against the Packers, but has also cropped up from time to time in other games. You also have to wonder just why the defensive backs always seem to have their backs to the football rather than trying to make a play.

These all seem like things that the coaches can at least try to correct, and they really, really need to.

Understand, this is not about playing mistake free football. It is about not making mistakes that kill your chances of winning. The ones that have cost Dallas so much have largely been really, really big.

They have to shorten the field

Even before the Jets game, we took a look at how the Cowboys are getting hurt by never having a short field for the offense to work with.

Nothing changed in that department.

Let me put this in another way: The Cowboys are the only team that has forced their offense to go at least 50 yards for a touchdown on every drive of the season.

Guess what is harder, scoring from your side of the 50 (in Dallas’ case, that is averaging out quite near their own 25 so far this year), or starting on the other side of midfield?

It’s not a trick question. Short fields greatly help the offense. Yet the Cowboys have had exactly zero.

Part of that is the lack of takeaways from the defense. It is also something that can derive rather naturally from the “bend, don’t break” approach thought to be favored by them, since that often gives up yards to allow the other team a chance to bury a punt deep if they are finally stopped. Poor coverage on returns plus a distinct lack of yardage when receiving punts and kickoffs also have a major impact.

The simple answer here is there is no simple answer. Turnovers remain one of the most random things in the game. The Cowboys have tried to generate some return yards, but nothing has gotten any traction.

Maybe it is just a matter of things finally breaking their way at some point, but this needs to change. If they can get just one short field a game, that would usually result in at least three points.

That would have come in rather handy in two notable examples cited above.

In an injury-riddled contest, mental toughness may be the key

The injury reports for both the Cowboys and the Eagles are long. It is entirely possible that both teams may only be able to come up with one starting offensive tackle between them.

When teams are physically beaten up, it often comes down to how well they maintain their composure and figure out how to work around the limitations.

In a bit of a theme for this post, it is something that has to be handled by both the players and the coaches. The backups have to be ready. We saw how having Randall Cobb out and Cooper getting hurt last week led to issues because the rest of the receiving corps was ham-handed early in the game, helping put Dallas in the too-deep hole. That has to go better, at all positions affected.

Still, this one is probably more on the coaches. The defense cannot allow Carson Wentz to have the kind of day Darnold did. They also have to make sure the run doesn’t gouge them.

Defensive performance is much more subject to factors outside their control than the offense. (Trust me on this. Or go delve into analytics Twitter.) The offense is where coaching can exert the most control. And we desperately need Kellen Moore to come up with some facsimile of the explosive play from the first three weeks.

We thought that was just the way he would be, but it has not turned out that way. Whether by his own volition, due to pressure from above, or both, Moore has become much more conservative of late. That means he is becoming predictable, squandering a great advantage he had as a new face.

It will take some guts for him to get this fixed. He really has to.