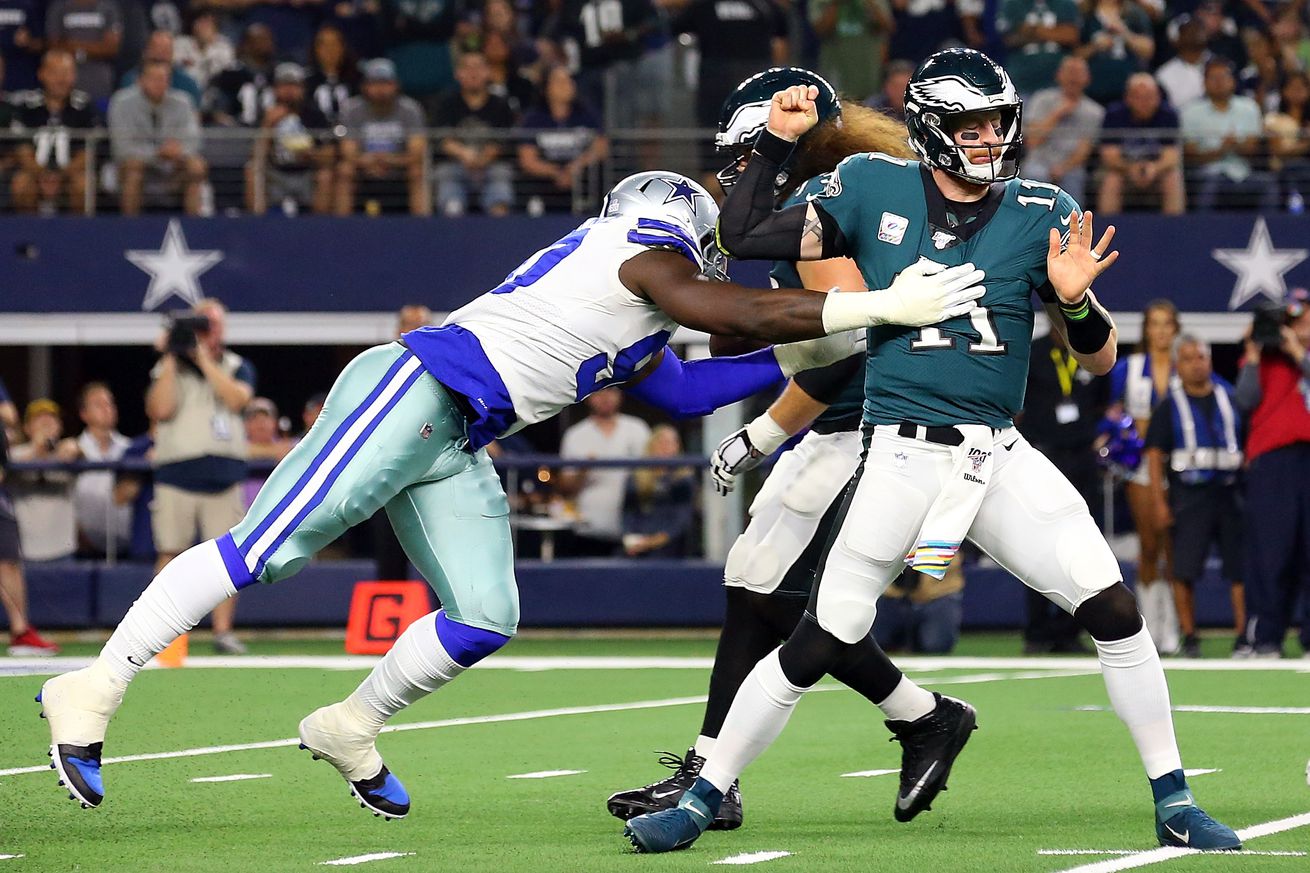 The Cowboys’ pass rush came through in a big way vs. the Philadelphia Eagles.

Last week, we called out the Cowboys’ defensive line for their inability to perform against the New York Jets. Just as we have to heap scorn on them when they don’t play well, they deserve praise when they do play well. That was surely the case on Sunday night as the Cowboys’ pass rush was extremely disruptive to the Eagles gameplan on offense. Carson Wentz was never allowed to get comfortable and the Cowboys brought him down three times.

This is what a disruptive defense looks like, you have plays being made by defensive ends, defensive tackles, linebackers, and corners. That’s a complete performance if you have ever seen one and it started early with the young linebackers.

In this clip, you got two great young linebackers, Jaylon Smith and Leighton Vander Esch knocking the ball loose early:

Best LB duo in the league?

Tight end Dallas Goedert doesn’t know what hit him and just like that Maliek Collins recovers the fumble for the Cowboys. Takeaways are a huge momentum shift for a defense and they tend to lead to many more. That’s exactly what happened here as the Cowboys were all-in on getting the ball back, their first of four takeaways on the day. When you rob the opponent of their possessions and score points on top of that, it’s a great way to make yourself unbeatable.

Quickly, the Cowboys offense responded with a touchdown for Tavon Austin and the defense was sent back out for more work. What DeMarcus Lawrence did was work over right tackle Lane Johnson:

.@TankLawrence gets the strip sack! #DallasCowboys

As Lawrence gets the strip-sack on Carson Wentz, watch the close up of Antwaun Woods as he makes a one-handed recovery. Rod Marinelli was shown on the sidelines saying “That is what hustle does!” He’s exactly right because this defense is at it’s best when there is hustle and awareness, two things the Cowboys had in bunches on that play.

The Cowboys offense made that a 14-point deficit in a matter of minutes and were up to 21-7 after an Eagles three-and-out. That’s when the Cowboys defense timed a corner-blitz to perfection, Jourdan Lewis picks up the sack on Carson Wentz:

It’s almost as if Jourdan Lewis should be used a lot on defense.

The Cowboys offense once again put up additional points, making it a three-score deficit for the Eagles to work from. Robert Quinn then got involved and the Cowboys went to the half up 27-7 after Brett Maher nailed a 63-yarder.

Robert Quinn’s with the sack and the snake celly @RQuinn94 pic.twitter.com/WBd4V9McSD

The Eagles offensive line could not protect Carson Wentz and by the time they figure it out, Dallas was forcing mistakes. Xavier Woods jumps this route and Wentz delivers a perfect interception opportunity:

Later on in the fourth quarter, Carson Wentz made yet another mistake when he dropped the snap. Kerry Hyder jumps on the ball to make the recovery for the Cowboys.

In one week, what a turnaround the Cowboys defense made. Every single defender saw chum in the water and went after it. That’s what you need from a playoff-caliber defense, they got takeaways and even better, the offense cashed them in for points. That’s something to build upon as these games get tougher.