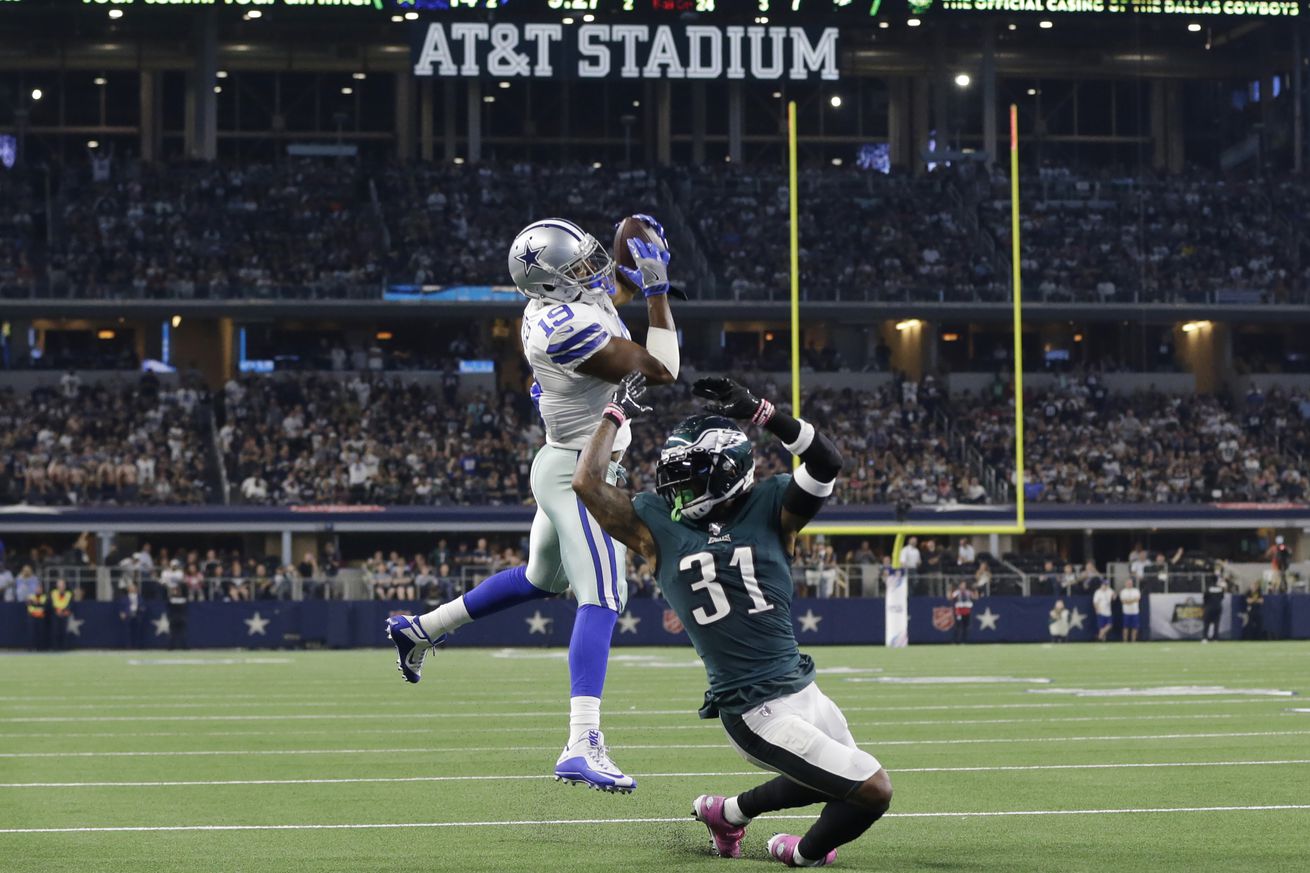 Since joining the Cowboys, Amari Cooper has arguably been the team’s MVP. Can he take them to the promise land?

Cooper faced high expectations in Oakland after he was taken fourth overall in 2015.

He is not surprised of the turnaround in Dallas, as the change proved to be good for him.

“I wouldn’t say it’s been too far off from what I expected,” Cooper said. “I expected to come in here and be a playmaker and help this offense and help us win games. I think I’ve done some of that so far.”

It was the first week of practice after Cooper’s arrival that Prescott got a clue that something special was about to take place. His quickness left the cornerback exposed.

“I said, ‘If I throw it you got to go get it,’” Prescott recalled. “I don’t know what release he did but it looked like he walked off the ball.”

The Cowboys are practically fully healthy heading into Giants week.

3:17 p.m. – For the second straight day, backup swing tackle Cam Fleming (calf) was the only Cowboys player on the 53-man roster who did not practice.

In case you were wondering, the Cowboys were interested in Jamal Adams via Jerry Jones.

“The coverage of it has been pretty accurate,” Jones said Friday during an interview on 105.3 The Fan, via The Athletic. “We obviously were trying to utilize our (draft picks) to help the Cowboys better than we could’ve used the same picks in the draft.”

The Cowboys reportedly engaged New York in an effort to pry Adams, a Texas native with a desire to return home, away from the Big Apple. Negotiations took place right up until the 4 p.m. ET deadline but ultimately proved fruitless.

Should the Dallas Cowboys kick the tires on Eric Berry one more time? – Kenneth Wilson, The Landry Hat

After missing out on Jamal Adams, is it time to take another look at Eric Berry?

While I don’t feel that is the case personally, more so neither agreeing or disagreeing on the premise with other jobs and responsibilities needing to be accounted for that may result in him appearing as the culprit or the scapegoat, that is what the eyes might tell the average person while they are watching it. That, however, brings us to this question. Should the Dallas Cowboys kick the tires again on Eric Berry?

While he missed almost the entire 2017 season after rupturing his Achilles in the season opener, he only played three games in the 2018 season, the final two regular-season contests and their lone playoff game. He was released by the Chiefs during the offseason and while there had been reported and rumored interest from several suitors, no deal materialized.

It is with the prior knowledge at hand that we have to ask ourselves, would he be an upgrade over Jeff Heath? That answer is unknown, which is made even murkier by the fact that no team has signed him thus far, even after the Cowboys had reportedly done their homework and due diligence on him a while back.

A mailbag question gets thrown to the mothership crew regarding key players in the second half of the season.

I heard you guys talking on the podcast about the “four games in 19 days stretch” that’s coming up, starting with the Giants. Obviously the focus and intensity will have to be there every week. Who’s a player who has seemingly gotten better throughout the season and you expect to give the team a lift down the stretch here?

Rob: Maliek Collins. The Eagles game was his best of the season, along with the entire defense. Collins was arguably the most consistent player in training camp and really showed that penetrating rush against Philly. The addition of Michael Bennett will help Collins and the overall defensive line rotation, whether Bennett’s lining up at end or tackle.

November has been good for the Dallas Cowboys.

After the 4-3 start, it’s imperative that the Dallas Cowboys come out of this stretch of games with at least a 3-2 record heading into December. The December schedule isn’t easy by any stretch either, and with it taking likely 10 wins to win the NFC East, anything less than a 3-2 record in November would mean the Cowboys would have to go 4-0 in December against the Chicago Bears, the Los Angeles Rams, the Philadelphia Eagles, and the Washington Redskins.

So uh, this is interesting.

Talib is currently on injured reserve and won’t be eligible to play until Week 16 at the earliest. There’s a chance that he won’t even play for Miami — the Dolphins may have just wanted an extra draft pick and were able to afford his salary.

Broncos cornerback Chris Harris, who played with Talib from 2014-2017, wouldn’t be surprised if Talib is released from injured reserve once healthy and signs with a contender at the end of the season.

“I think they probably cut him or he gets released and he probably gets to choose where he wants to go,” Harris said Wednesday. “I wouldn’t doubt it if I didn’t see him on the Cowboys or something like that.”

In five career games against Dallas, Talib has broken up seven passes and totaled two interceptions, including a pick-6. The five-time Pro Bowler helped Denver win Super Bowl 50 following the 2015 season and he ranks first in Broncos history with six interceptions returned for touchdowns.

It’s been a rough rookie season for Trysten Hill, and the last week has probably been the hardest for the rookie.

The 2019 second-round pick has yet to make an impact on the field, recording just one tackle in four games. He continues to struggle with maturity off the field. He fell asleep in a team meeting in front of NBA legend Isiah Thomas on Oct. 24 and was called out.

We have to wait until Monday night to see the Cowboys play, but in the meantime we caught up with Ed Valentine from SB Nation’s Big Blue View to talk about the New York Giants.