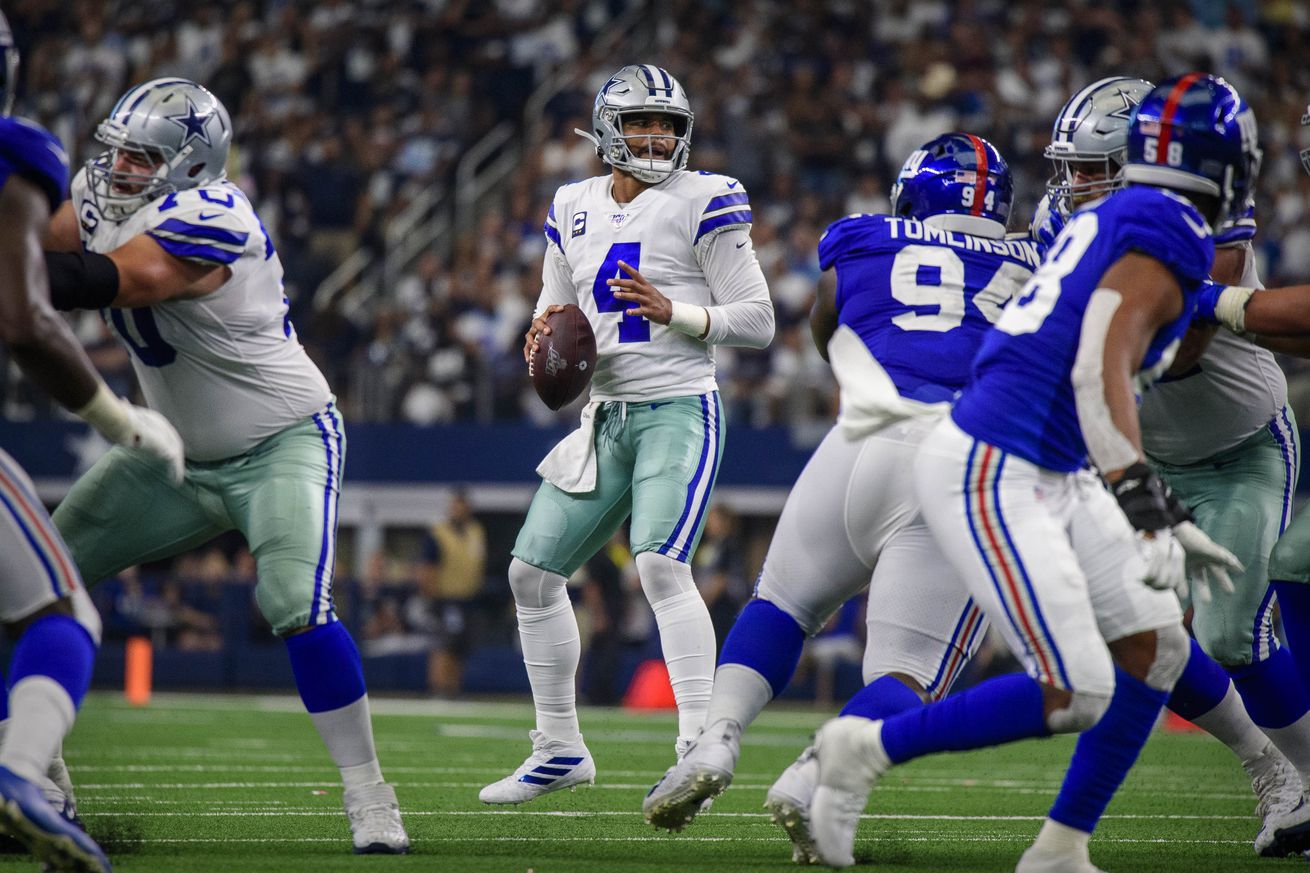 The Cowboys and Giants match up for the second time this season tonight. How does the staff over at the Mothership feel about the MNF game? Big plays could be a huge factor.

Rob Phillips: To me, Round 2 will come down to which team limits big plays. In that department the Cowboys did a solid job last time, save for Saquon Barkley’s 59-yard run. Giants rookie quarterback Daniel Jones has shown he’ll test teams downfield, even at the risk of turnovers. Sometimes one play can be the difference, like the Jets’ 92-yard score at MetLife three weeks ago. But the Cowboys’ defense delivered easily its most complete performance against the Eagles and I believe that will continue. Offensively, the Cowboys have piled up 28 pass plays of at least 20 yards and converted 6 into touchdowns, fourth-most in the league. I think they’ll make enough of those Monday to get to 5-3.

While Helman believes the offense could put on a show.

David Helman: It feels like it’s been 50 days since this team has played a game, so I’m approaching it like a fresh start. It’s the second half of the season, the Cowboys are healthy and anything is possible. This attitude bit me three weeks ago, but I just don’t see how this team can’t be good enough to go to MetLife Stadium and pull out a win against a lesser team. The Giants’ offense is good enough to be concerning with Daniel Jones, Golden Tate and Saquon Barkley in the lineup – but it’s this New York defense I don’t trust. I don’t think the Giants are going to be able to pressure Dak Prescott, and I think he’s going to have another field day like he did in Week 1. With everything clicking in the passing game, it should open things up just enough for Zeke Elliott and Tony Pollard. Daniel Jones will play well enough to make it interesting, but Dak will throw for 330 and pull away. Cowboys win – something like 42-27.

What is the CBS model predicting?

The model knows the Cowboys average 273.3 yards per game behind quarterback Dak Prescott and running back Ezekiel Elliott. Prescott is completing 70.6 percent of his passes for 2,123 yards and 12 touchdowns. Elliott has rushed for 602 yards and six TDs. Prescott has developed a strong chemistry with receiver Amari Cooper, who has 38 receptions for 621 yards and five touchdowns.

But just because Dallas has the NFL’s top offense doesn’t mean it will cover the Giants vs. Cowboys spread on Monday Night Football.

Into gambling? The staff at ESPN gives some props that might be worth putting money on, including how many yards Dak Prescott will throw in Met Life Stadium on Monday night.

Clay: This one is a bit tough to swallow considering Prescott threw for 405 yards in the Week 1 meeting between these teams. Prescott also cleared 400 yards against Green Bay, but he has been under 279 yards in his other five games, averaging 251.0 passing yards per game this season. We saw a similar trend in 2018, as Prescott reached 385 passing yards in two games but had no additional 300-yard games, averaging 220.9 passing yards in his other 16 games (including the playoffs). The Cowboys have remained committed to the run, calling pass 56% of the time in 2019, which is sixth-lowest in the league. Dallas is favored by 7.5 points, which should allow Ezekiel Elliott to stay busy. Prescott’s projection comes in at 267 yards.

Dallas Cowboys looking to prove they’re all in on Super Bowl run after Bennett trade – Clarence Hill, The Star-Telegram

Monday will be the first opportunity for the Dallas Cowboys to showcase Michael Bennett and their all-in mentality.

Again, the Cowboys traded for defensive end Michael Bennett to make an immediate impact and help the team make a playoff push. There will be no easing him in.

He will play Monday against the Giants as a backup defensive end and nickel pass rusher from the tackle position.

“We’re looking forward to him getting out there and having a great impact,” defensive passing game coordinator Kris Richard said. “He’s very familiar with our system, and he’s already intelligent. It’s not as if there’s going to be very much that we can throw at him that he won’t be able to pick up.”

Richard is familiar with Bennett from their five years together in Seattle, including a Super Bowl title in 2014, before both departed following the 2017 season. Richard came to Dallas, and Bennett was traded to the Eagles before being traded to the Patriots last March.

What Richard likes most about the acquisition of Bennett is that “he understands excellence.”

“He’s a champion,” Richard said. “His history, his playoff experience. … Wherever he’s been, he’s had success.”

The staff over at the Giants’ site gives ten things to watch for on Monday evening. The Cowboys traded for Bennett, while the Giants also added a defensive lineman themselves.

4. Leonard Williams set for Giants debut. A week after the Giants signed hybrid linebacker Deone Bucannon, the team acquired defensive lineman Leonard Williams in a trade with the Jets, who received a 2020 third-round selection and a 2021 fifth-round selection that could become a fourth. Like Bucannon, who had one solo tackle in his 11 defensive snaps in his Giants debut, Williams is expected to play right away and fit into the rotation.

The Giants will also have somebody different behind center than the team’s previous matchup from earlier this season.

8. DJ vs. Dak. Last week, Daniel Jones joined Dak Prescott as the only rookie quarterbacks to have two games of at least 300 passing yards, two touchdown passes and zero interceptions in NFL history.

Daniel Jones joined Dak Prescott as the only rookie quarterbacks to have two games of at least 300 passing yards, two touchdown passes and zero interceptions in #NFL history.

The Giants will be without one of their best skill players, as Sterling Shepard will not see the field due to a concussion. We hope Shepard makes a full recovery.

“He practiced fully this week and was limited with no contact the two weeks before that,” Shurmur said. “He told (Sr. VP Medical Services/Head Athletic Trainer) Ronnie (Barnes) last evening (Saturday) he didn’t feel well and was sent for examination and evaluation. When he arrived for work this morning, he still did not feel well. At that point, the decision was made to continue in the concussion protocol.”

Before getting cleared from the protocol, Shepard took part a full contact practice earlier this week.

Monday night will mark the fourth game that Shepard has missed since suffering his second concussion in four games, back in Week 5 against the Minnesota Vikings. Shepard was also concussed in the regular season opener against the Cowboys.

Woody: ‘Zeke will be tempo setter for Cowboys’ – ESPN (VIDEO)

Will the Cowboys rely on Zeke to get things going on Monday?

Damien Woody and Rob Ninkovich like the Cowboys to get the win over the Giants on Monday Night Football.

The Cowboys are going to have pay up on some talented players.

With that in mind, Cowboys quarterback Dak Prescott comes in at No. 4 on the list, right behind Brady, Brees, and Philip Rivers. ESPN predicts Prescott will re-sign with the Cowboys.

Coming in at No. 12, Prescott’s favorite target, Amari Cooper. Like Prescott, the prediction is that the WR will re-sign with the Cowboys. However, if no deal is done with either, Dallas could still use the franchise and transition tag to keep them around.

Right behind Cooper, and the last Cowboys player on the list, at No. 13 is Cowboys CB Byron Jones. The pie is only so big, and ESPN’s prediction is that the Cowboys let Jones test the market.