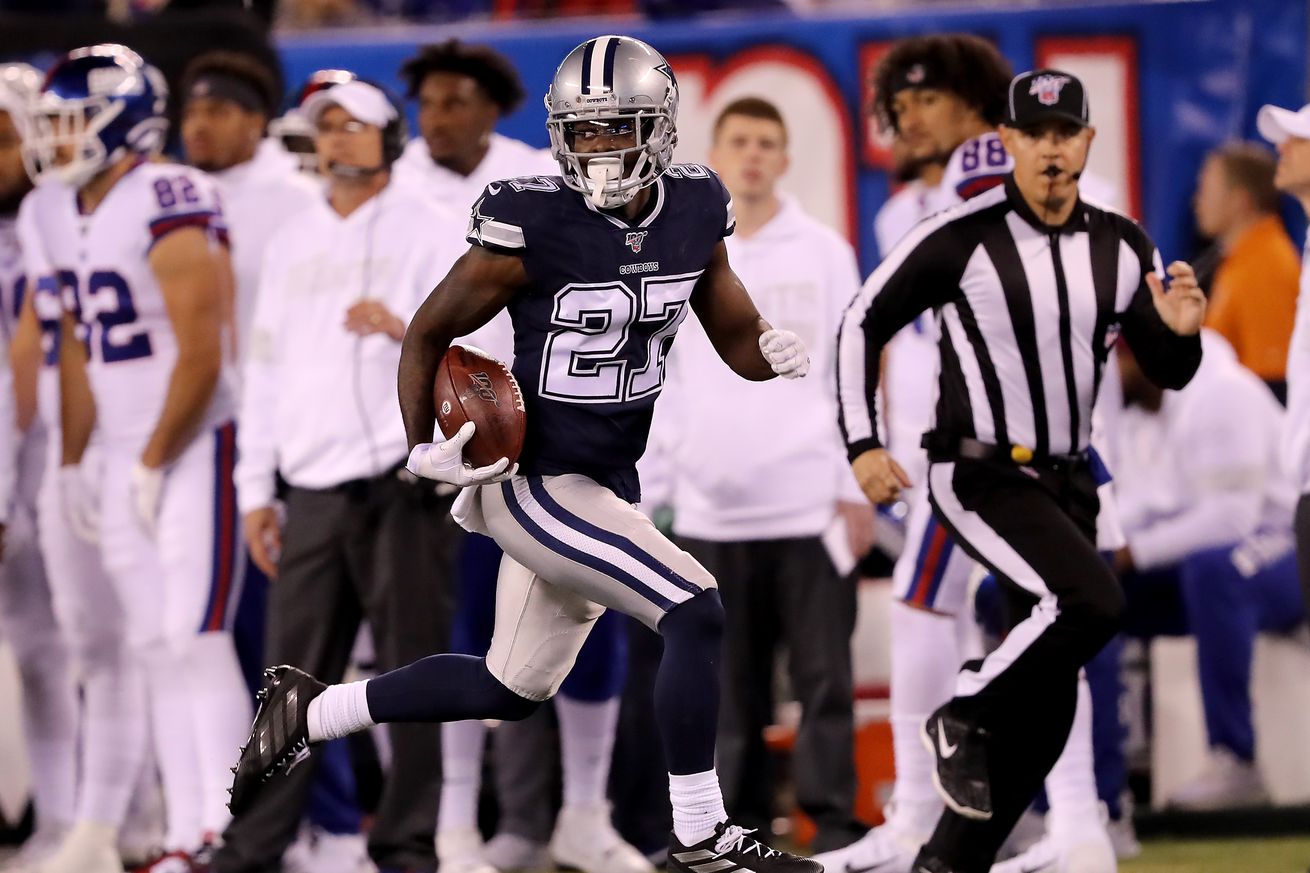 Lewis earned the right to start the rest of the way. | Photo by Elsa/Getty Images

Digging deeper into the Cowboys win over the Giants.

The Dallas Cowboys got a big, much-needed win over a clearly overmatched New York Giants team on Monday night. That was despite the Cowboys making their biggest mistakes of the game early, and giving the home team a chance to trap Dallas in another MetLife Stadium nightmare. The 37-18 final score was impressive, but also padded by what was really a garbage time defensive score.

Now, sitting at 5-3 and leading their division by a half-game over the Philadelphia Eagles, the Cowboys enter the second half of the season needing to figure out what went wrong and needs to be corrected. There were more things like that than normal in a three score win. Additionally, some things went very well indeed, and those need to be built on. One place to find those things are the stats, so we will dive in seeking knowledge. We start off with the bad.

Dallas would eventually wipe it out, but you don’t often stake an opponent to a plus two turnover margin early and survive. Unlike some of the previous times the Cowboys gave the ball away this season, there was nothing fluky about the two they lost to the Giants.

The first was rather hard to figure out, because Dak Prescott basically threw the ball directly to Antoine Bethea. The best theory may be that Prescott just lost track of the free safety. Whatever the reason, it clearly needs to be sorted quickly.

Randall Cobb had the ball knocked loose by good tackling. But you always can protect the ball, and he needs to work on that.

Dallas was simply atrocious. The Giants may have spotted something, because they gashed the Cowboys on two returns out to midfield. On the night, they had seven returns for 186 yards, an average of 26.6 per return. Those are basically free yards to start a drive. The special teams have not been special at all this season, and this has to change. Add in the boneheaded mistake by Tony Pollard on the opening kickoff, and it is just worse. Unless it does get better, Keith O’Quinn could be out of a job soon.

This is a bit of a fudge, because I don’t have precise numbers on the drops in this game. But there were too many, including ones by Jason Witten, Cobb, and Pollard, who could have scored if he had just looked the ball in before trying to turn and drive to the end zone.

This has been an ongoing issue all season and hasn’t shown improvement. Imagine how Prescott’s numbers would look if they had fewer drops.

The big breakdown on defense

The Giants’ biggest weapon is Saquon Barkley. The Cowboys came so close to completely shutting him down. On nineteen touches, he gained only 30 yards, including only two receiving.

But he had one more touch in the game.

BARKLEY turns on the jets and take the pass from Jones for 65 yards in the blink of an eye!!! 23-15 #DALvsNYG #MNF #CowboysNation #NYGiants #GiantsPride #NFL100 #NFL #SportsTalkLine pic.twitter.com/a03QE3At4b

Fortunately for the Cowboys, the Giants could only get three points out of that. But it could easily have led to a one-point lead again, or even a tie. There are going to be mistakes in a game by any team, but Dallas just keeps having big ones. And as we saw against that other New York team, sometimes those can be fatal.

In a league-wide trend, the officiating was basically a steaming pile of excrement once again. There were several very questionable calls that went against Dallas, arguably including both of Tyron Smith’s holding calls and every flag they drew when Will Hernandez was in the vicinity.

Nonetheless, 10 penalties for a whopping 108 yards is just not acceptable, not matter the failings of the officials. This is another place the team has been very bad all season.

The #Cowboys have to cut back on penalties.

Here are the number of penalties/penalty yards by game this season.

This is totally unacceptable.

Red zone and third down efficiency

Dallas had a bad day in both departments. They only managed to score a touchdown on one of three trips into the zone, which is not good enough at all. Third down was a struggle as well, at just four of eleven for 36%. Those have been much stronger in the previous wins this year, and they need to get back to better production in both.

Those are the big negatives. But there were also some significant positives, plus a couple of things involving snap counts that are more than a little encouraging.

The Cowboys eliminated the negative margin by getting two fumble recoveries and an interception by Xavier Woods. After a terribly slow start this year, they may be finally breaking through in this crucial department. That’s not the only place they may be turning the corner.

This was a big plus on both sides of the ledger. First, they sacked Daniel Jones five times in the game, and all but half of one sack came from the defensive line (more on that in a bit). And Jones was hit eleven times. He was under attack all game. Admittedly, the Giants have a pretty feeble offensive line, so this may be hard to maintain, but it is a big plus.

Meanwhile, Prescott had generally good protection throughout the game, plus he helped his cause with good movement to buy time. He was not sacked, and only suffered five hits. The line is looking a lot more like the potent unit of old and one of the most encouraging signs was a very good outing from LG Connor Williams.

Ezekiel Elliott did not just have openings in amassing 139 yards rushing. At times, he had huge gaps to run through, and his yards after contact were negligible because he was running free so often. All he lacked was a truly long run or any touchdowns. The latter was partly because the scoring was all from fairly long range, with the shortest touchdown coming from fifteen yards out.

As in Blake Jarwin, whose lone catch was a 42-yard score to really get Dallas back in the game with only 52 seconds left in the first half. Given how all he seems to do against New York is score, you wonder why they didn’t throw to him a few more times.

Despite the horrid mistake on his first play, Prescott came back and was key in winning this game, with his three touchdown tosses. As mentioned, it should have been even better if not for a drop or two, plus Cobb was robbed again by one of those penalties.

The final two offensive scores came on long drives of 75 and 89 yards in the fourth quarter. I don’t know about Dan Orlovsky, but that seems clear evidence that Prescott can take things over when the team needs him to.

Now, about those defensive snap counts

This is big, and could pay some big dividends down the road if the staff handles things correctly. First, look at the defensive line.

That is a thing of beauty. Let me ‘splain.

One of the foundations of Rod Marinelli’s approach to defensive line play is to send his pass rush in waves. A big part of that is keeping his players fresh with a rotation, and this is how you do that. No one had to be on the field for an excessive number of plays. The sack production came from a bunch of players. DeMarcus Lawrence, Michael Bennett, Maliek Collins, and Dorance Armstrong all had one, plus Robert Quinn split a sack with Jaylon Smith, who continues to be an effective blitzer. The stars shone, and Armstrong gave them some depth with his sack/forced fumble to put an exclamation point on the game. That is impressive, no matter the opponent.

The run defense was almost as impressive, holding the Giants to only 100 yards on the ground while just about shutting Barkley down as a rusher. Their biggest gainer was Jones, who had both scrambles and designed keepers for 54 yards, but the interior of the line was basically impenetrable. Given the down and distance situations faced by New York for most of the game, that is a big plus for Antwaun Woods and Christian Covington when they were on the field.

Next, here are the linebackers.

Of course, Leighton Vander Esch missed the game due to a stinger. No LVE, no problem. The depth at the position is real.

Jaylon Smith deserves mention because he has started playing so well again, and he was the only defensive player on the field for every single play. He was all over the place making plays, including that half sack. Given what he has overcome, there aren’t enough kudos to hand out.

Additionally, Sean Lee stepped up. He was tied with Smith for the team lead in tackles, playing his best game in at least a couple of years. Having more reps seemed to benefit his play. He was great both tackling and, mostly, in pass coverage. He only looked bad on the Barkley 65-yard screen play, when his age kinda showed. Otherwise, he was vintage General.

Now for the defensive backs, where several players came up big.

When the running game for the opponent is ineffective, limiting the pass to 171 yards and a single touchdown is a good day for the secondary. Byron Jones had his normal good game, and Xavier Woods was a turnover maker, with the big interception and return plus having a hand in causing the first Jones fumble.

But it was two others who you should take note of. First was Jourdan Lewis. With Anthony Brown back, he still got the start, and the staff would be absolutely foolish to change that. Lewis was also in on that fumble just mentioned, and put the cherry on the top of this win with his 63-yard scoop-and-score on the last fumble of the game. He is emerging now that Kris Richard seems to have finally gotten past his lack of length.

Less obvious but potentially very important moving forward, was how Darian Thompson performed. He got a lot more snaps because Jeff Heath was injured and required stitches to his knee, but the secondary may be better off with him. Heath is an opportunistic playmaker at times, but also can miss at moments. Thompson recovered that fumble Woods and Lewis forced and was hardly a liability in the rest of his snaps. With Heath possibly missing some time, Thompson may just do the same thing in supplanting him as Lewis has done to Brown, and that could be a good thing in the long run. Heath just seems better suited to a more limited role, although he can still be a factor, especially as one of the better special teams guys.

Those are the things gleaned from the numbers. Of course, the most important ones of all are 37-18, and 5-3. The Cowboys are in solid shape for the last half of the season. Hopefully the good numbers will continue to outweigh the bad.