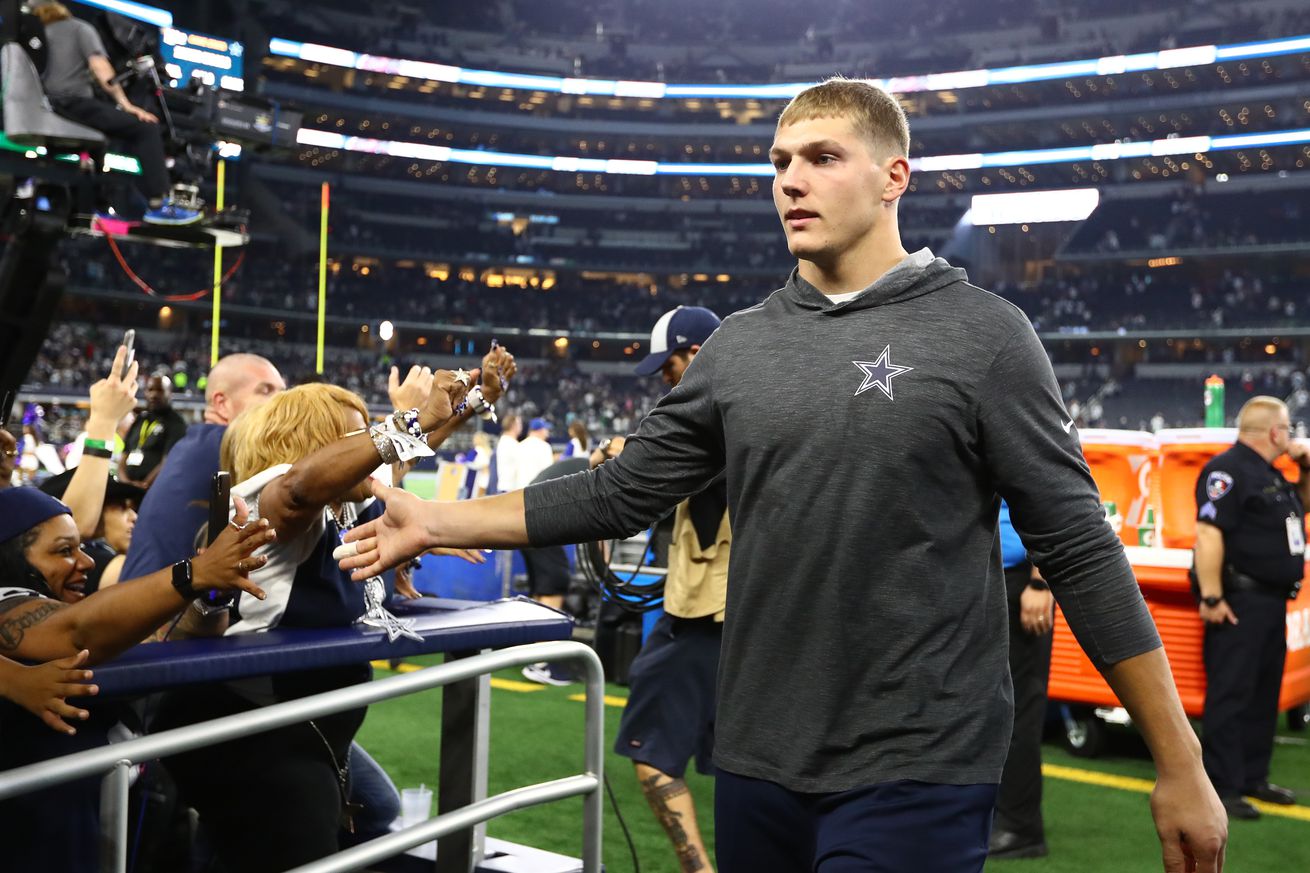 Injury Update: Cowboys Should be at Full Strength Against Vikings – Brian Martin, Inside the Star

Well that is great news heading into Sunday Night Football.

No offense to Sean Lee, but the Dallas Cowboys are better with Leighton Vander Esch on the field. Having him back in the lineup could be huge, especially as it pertains to neutralizing the Vikings talented RB Dalvin Cook as both a runner and receiver out of the backfield.

I wouldn’t be surprised however if the Dallas Cowboys were a little bit cautious with No. 55. I think we may see both him and Sean Lee rotating a bit on defense if Vander Esch isn’t 100%. There’s still a lot of football to go this season and there’s no reason to subject him to reinjuring his neck.

The biggest injury concerns though may have occurred a few days ago when news broke that Wide Receiver Amari Cooper was having an MRI on his knee. Luckily though it sounds like he will be good to go as well.

That’s a big loss for the Vikings. Can the Cowboys defense control Stefon Diggs and Dalvin Cook?

EAGAN, Minn. (AP) — The Minnesota Vikings have ruled wide receiver Adam Thielen out for the game at Dallas, increasing the possibility the two-time Pro Bowl pick will rest his injured thigh for the remainder of the month.

Thielen was hurt during a first-quarter touchdown reception on Oct. 20 at Detroit and held out the next week against Washington. It was the first absence of his six-year NFL career.

Thielen returned to the lineup last Sunday at Kansas City before aggravating the injury and sidelined in the first quarter.

After the Vikings visit Dallas on Sunday, they host Denver on Nov. 17 before their bye. So if Thielen were to be held out until the Dec. 1 game at Seattle, he would get four weeks of recuperation.

While the Cowboys are fully healthy as far as inactives go, they still have some guys to monitor on the injury front.

Coach said he doesn’t think that the knee is an issue and that he’s played well since coming back from the earlier knee injury. He said Gallup is refining his route-running and can do things after the catch, he’s been a vertical threat for the team.

The Cowboys have dominated Kirk Cousin’s football teams in recent history. They need that trend to continue this weekend.

When looking at Cousins’s splits against the Cowboys, they tell a somewhat favorable tale for the team in Dallas. In seven games against the Boys, Kirk Cousins has a 1-6 record. That is definitely something that might be on his mind heading into this weekend, although it shouldn’t be on the minds of Cowboys defenders.

When looking at Cousins’s other stats against the Cowboys, it also plays in their favor. While it isn’t the 14 interceptions he has thrown to the New York Giants across his career, the Cowboys are tied for the fourth highest-ranked team on this list with the Arizona Cardinals, having picked off Cousins 5 times across the seven times he has faced Dallas.

He has also taken 13 sacks to the Cowboys across his career, which could be indicative of the offensive lines he’s played behind more than anything, but worthy of mentioning considering the Cowboys’ lack of ability to get home at times this season and with the fact that this number is also tied for the fourth-highest among this list.

While people like to point to the time of day as a big indicator as to how Kirk Cousins might perform on any given Sunday, with him being a combined 9-23 in games that start at 4:05 EST or later, the stats that are most telling to me are his splits based on being home or on the road.

On pace to rack up 1,482 rushing yards this season — second-most of his career — and having already matched his touchdown output from all of last season, Elliott has reaffirmed himself as arguably the best in the business after holding out to land a six-year, $90 million extension in late August that includes $50 million guaranteed, but there are other halfbacks in hot pursuit for his throne, and Dalvin Cook is one of them. The former second-round pick has battled back from a torn ACL suffered in his rookie 2017 season to deliver a breakout year in 2019, having already rushed for a career-high 894 yards and nine touchdowns in nine games.

That makes Cook the leading rusher in the league heading into his clash with the Cowboys, in a matchup that will cast a blazing-hot spotlight on both him and Elliott — to help determine if the challenger is truly ready to become the champion.

”I’m trying to go outrush him,” Cook told media this week, via USA Today. “And I know he’s trying to do the same thing. It all comes back to this game is going to be won in the trenches.”

Who needs to dominate their matchups if the Cowboys want to come out on top of a tough Vikings team?

Rob: An obvious one is Dalvin Cook against the Cowboys’ linebackers. Sean Lee and company did an excellent job making space tackles against Saquon Barkley on Monday. Yes, Cook is the league’s leading rusher, but he also has 41 catches out of the backfield. It’s a similar challenge in that regard. On the flip side, DeMarcus Lawrence draws one of the better young offensive tackles in the game, Brian O’Neill. Lawrence and Michael Bennett were outstanding from the left end spot Monday. They’ll have to chip away to get at Kirk Cousins, who has only been sacked 16 times this year.

David Helman: It honestly feels as simple to me as whether or not Amari Cooper can play. These teams are quite similar to each other, with stout defenses and a pair of offenses that lean heavily on the running game. I think both defenses can limit the offenses — for the most part, at least. So if Dalvin Cook and Ezekiel Elliott don’t take over this game? That’d be the better passing attack. The Vikings don’t have Adam Thielen, which puts them in a bind if they’re going to exploit the Dallas secondary. Meanwhile, if Cooper suits up, I think there are plays to be made against Trae Waynes and Xavier Rhodes. I assume Cooper is going to play, and he’s going to help Dak Prescott throw for 250 and two touchdowns. It’s going to be stressful, but I don’t trust Kirk Cousins to keep pace. Cowboys escape with a win – something like 24-20.

The Cowboys have stated their desire to keep Prescott for the long term. Dallas has offered north of $32 million per season, which would make him among the highest-paid quarterbacks in the league. So far, the sides have not come to an agreement.

The initial hope was to get a deal done last offseason, but that hope shifted to getting a deal before training camp, during training camp and then before the season opener.

”We just keep grinding,” Jones said. “No one thinks more of him than [owner and GM] Jerry [Jones] and I do. … He’s doing everything the right way. There’s nothing not to love about him. Great player. Great leader. He’s what you want in your franchise quarterback.”

Prescott bet on himself entering 2019. Given the way he has played in the first half, he is looking at a win that could make him the highest-paid quarterback in the NFL.

Did Sean Lee do something really selfless, or is Stephen Jones being calculated? We discussed on the latest episode of The Ocho.

Here’s how Cowboys fans are feeling through Week 10.