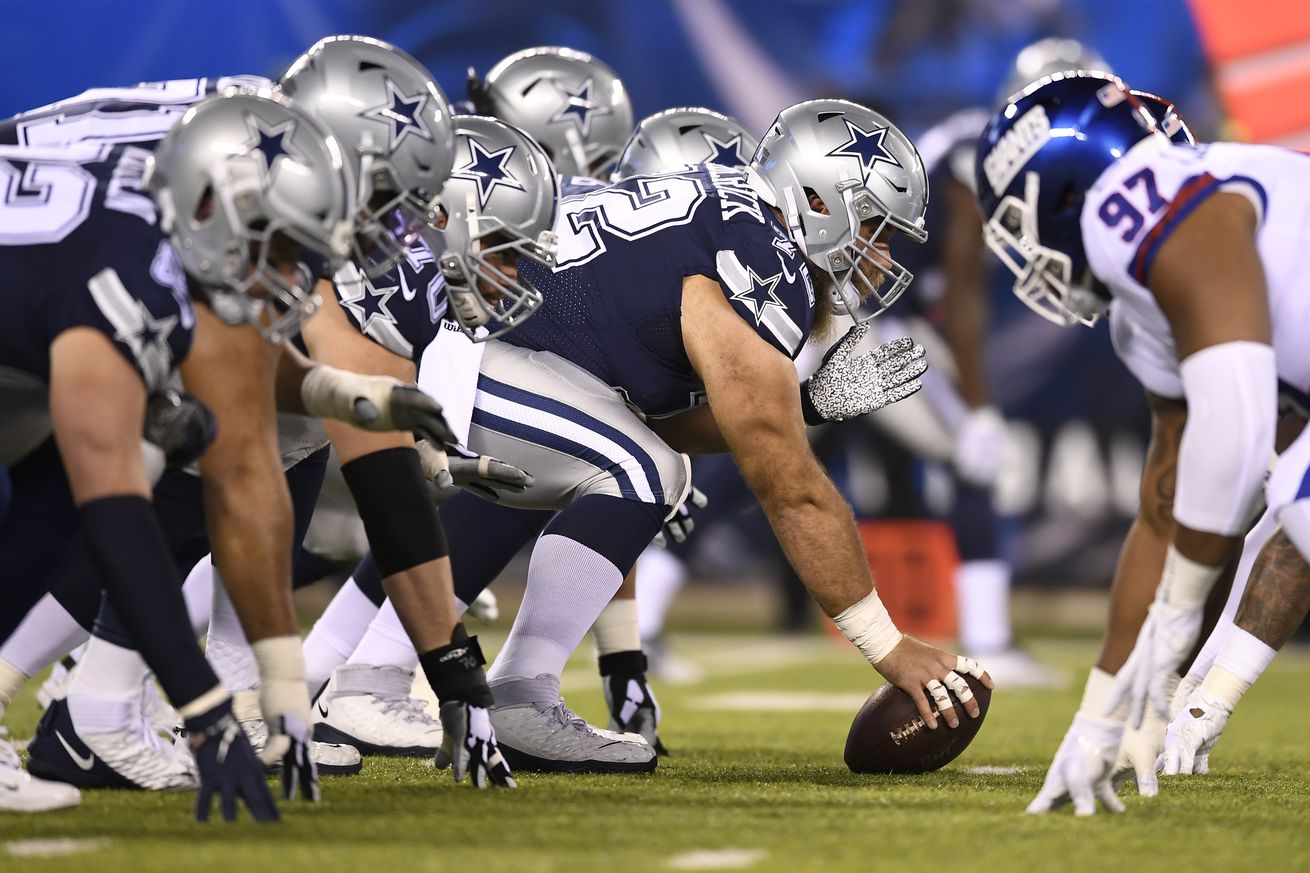 It was a mixed if ultimately successful performance on Monday night for the Cowboys.

The Dallas Cowboys put their fans through an emotional wringer against the New York Giants. From sudden shock, to growing despair, followed by rising hope, and ending with easy confidence as they pulled away to a big winning margin.

It left us with a lot to chew on.

The idea that the Cowboys have lost games this season due to their own mistakes, and will have to stop making them to succeed, has become something of a theme of late. In the losses this year to the New Orleans Saints, the Green Bay Packers, and (sigh) the New York Jets, Dallas found a different way to lose in each one. First, a couple of fumbles killed the offensive momentum against the Saints, and they never were able to regain it. Then an early interception let the Packers and old nemesis Aaron Rodgers and new thorn in the side Aaron Jones embarrass the home team. Finally, multiple dropped passes and a huge defensive slump late in the second quarter led to the mystifying loss to the Jets, who couldn’t even beat the Miami Dolphins last Sunday.

Against the Giants, they didn’t just make one of those types of mistakes. They had all of them. An interception on the first play from scrimmage, a fumble to kill a promising drive, several others stopped by drops, and the big screen pass to Saquon Barkley. To be brutally honest, the Cowboys probably should have lost that one.

But they didn’t, because the defense started getting takeaways and sacks in bunches while being almost impenetrable in the red zone, Kellen Moore stuck to his guns and didn’t go conservative, and Dak Prescott rebounded from his huge mistake to have a strong performance. Oh, and Ezekiel Elliott was at times almost unstoppable. The fact that the Giants are one of the bottom-dwellers means that they still must cut down on the miscues. But this was the first time they took a shot to the face and fought through it. I find that rather encouraging.

This defense is starting to become a force

Writing about being able to put DeMarcus Lawrence, Robert Quinn, Michael Bennett, and Maliek Collins on the field at the same time borders on being NSFW. We saw what that may mean on Monday as they all had a hand in the sacks, and Dorance Armstong got in on the fun on the last New York play from scrimmage. The Cowboys now can get some real pressure on the quarterback just rushing four, and Rod Marinelli and Kris Richard have figured out how to use some judicious blitzes to good effect.

Meanwhile, the linebacking corps has demonstrated real depth in the form of a Sean Lee that hearkens back to his best days. And the secondary has two emerging players to go with Byron Jones in Xavier Woods and Jourdan Lewis. Between them, that pair was involved in all three of the takeaways. That’s one of the most heartening developments of the season.

As a group, they put together a sterling performance, with only that long Barkley reception and some Daniel Jones runs to mar things. Holding New York to only one touchdown on five red zone trips created the margin of victory. They also had another really good day denying third-down conversions, and completely stymied Barkley as a rusher.

Now they have to continue to perform, with some considerably better opponents coming. That starts with the Minnesota Vikings. The job they did against the Giants should be a confidence builder, and that is all good.

The Dak-Kellen-Kitna partnership is off to a beautiful start

Prescott has truly flowered with Moore calling the plays and Jon Kitna adjusting his approach to throwing the ball, especially in the area of using the deep middle. Oh, and having Amari Cooper on the receiving end of things doesn’t hurt in the slightest.

This just looks entirely different than what we saw a year ago. The passing offense is far more explosive, and utilizing the entire field for a change. With Elliott still providing a potent punch on the ground, and the offensive line playing very well in both phases, there seems to be no limit to what they can do if they just execute.

We can argue about how legitimate some of the calls are. Across the league, there is little question that officiating is not very good.

Regardless, Dallas is getting flagged at a completely unacceptable rate. And the errors balance out to a degree, with the Cowboys benefiting on Monday from a pass interference call that wasn’t made against them, and at least one call against the Giants that might have been a bit of a gift. They simply have to exhibit better discipline and (again) execution. They can’t eliminate all the penalties, of course, such as the occasional offsides Bennett is going to draw as he tries to get a jump. But they have to be able to cut down on the overall number, or they risk losing a game or two more they shouldn’t.

What is up with the special teams?

While just about every other part of the Cowboys has had some strong showings, the special teams, outside of some long Brett Maher field goals, have not been good yet. Against the Giants, they had one of their worst outings, getting absolutely smoked on kick returns. They gave up 186 yards on returns to the Giants, in a time where most NFL teams are not doing much of anything with returns. The Cowboys certainly are in tune with the majority, as they have not really had a really good return all year. Punts, both ways, are just sorta meh.

This is mystifying, because some players like Byron Jones, Xavier Woods, and Darian Thompson, who all performed well during their defensive snaps, are also playing pretty significant roles on STs. Why things are not going at all well there is just hard to figure out. Obviously they need to sort that out, because despite the uptick in takeaways, the Cowboys once again lost the field position battle, as they have in every other game save the win over the Eagles. That just stresses the defense more, and while that unit rose to the occasion this time, it is a decidedly unhealthy trend.

The Cowboys may be underestimated, and that’s just fine

Maybe it’s the three-game losing streak. Maybe it’s that one of those was to the woeful New York Jets. Perhaps it is the way so many non-analytics oriented pundits have Prescott rated much lower than his numbers would indicate. It could be the disrespect some of those same types have for Jason Garrett. Or the lingering, outdated view of Jerry Jones as an inept GM. Then there is the fact that they have only beaten one team that now has a winning record, the Philadelphia Eagles.

For whatever reason or reasons, it just feels like the Cowboys are not being looked upon as a real contender. Maybe that is justified or even a bit inaccurate, as some are coming around out there, but I, for one, think this team is about to finish up strong and make a run in the playoffs. The pieces certainly look to be there, outside that special teams situation.