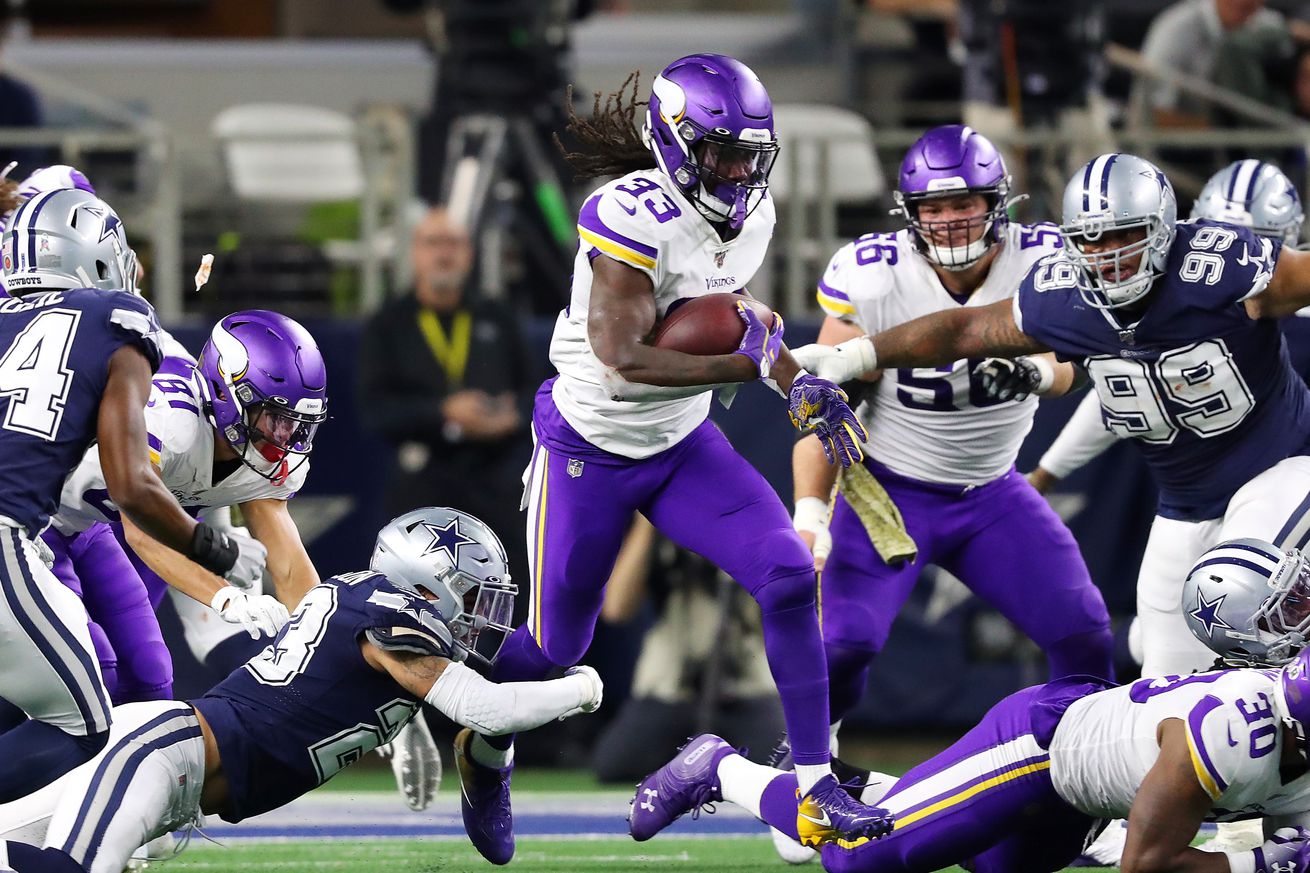 Let’s take a look at the tape for the Cowboys and Vikings game.

The Dallas Cowboys lost a tough one on Sunday night. It was a valiant effort after digging themselves into a 14-0 hole to start the game. Then, they went on a roll, scoring 21 points on their next three possessions to take the lead. But in the end, the Cowboys came up just a tad bit short when they couldn’t close the deal.

The rough thing about this one was that they didn’t lose this game because they were sloppy in protecting the ball, resulting in some unfortunate giveaways. Nor did they lose because they were plagued by penalties that stalled a bunch of drives. The strange thing about this one is they lost because they couldn’t win in the trenches. They lost the rushing battle by over 100 yards as Vikings running back Dalvin Cook had a big day, whereas the Cowboys were unable to counter as Ezekiel Elliott was shut down.

When Dalvin Cook gets going, good luck trying to slow him down. The Vikings were able to maximize their running backs power running style by having C.J. Ham leading the way with some very well-executed blocks. The Vikings fullback did a great job paving a path for Cook to come barreling through. Ham did a fantastic job of targeting Cowboys linebackers and taking them out of the play. By the time Cook was first contacted, he was already eight yards down field and had a full head of steam.

Getting lineman to the second level

Not only did the Vikings use their fullback effectively, but their offensive line moved out into space very well. They were able to get their guards into the second level, making it extremely difficult for the Cowboys linebackers to get after the running back. It was a great design and good athleticism for those guys to get down the field, allowing their runners to burst through the lanes at top speed.

Just get in the way

It wasn’t necessarily that the Vikings were overpowering the Cowboys defenders; however, it was a full team effort to be as much as a nuisance as they can. Kyle Rudolph had two touchdown catches on the night, but he helped his team with his blocking ability as well. On the Vikings fourth-down touchdown run, he was able to push Leighton Vander Esch just enough to the outside to where he couldn’t square up on Cook to make the stop. And with the help of another lead block by Ham, Cook had just enough room for the go ahead score.

No answer for the screen

Not only did Cook have 97 yards rushing, but he was also the Vikings leading receiver with seven catches for 86 yards. This was due to big chunks on screen plays. For some reason, the Cowboys defense had all kinds of problems tackling him in the open field. Bringing Cook down is no easy task, but the Cowboys did themselves no favors with some poor tackling attempts.

Jaylon Smith ran right by him on one play. Sean Lee lost his balance after Cook cut inside, only to gain bonus yards when several other defenders whiffed on the tackle as well. And Vander Esch had no chance when a convoy of offensive linemen shoved him completely off the field.

The good news is the Cowboys improved as these plays weren’t available for Minnesota in the second half. The bad news is the Cowboys linebackers are supposed to be one of the stronger units in the league, but they just haven’t been playing like it. They just can’t keep themselves in position to make the play and have been victimized several times this season.

While the Vikings offense did a great job of opening up spaces for Cook, the same was not true for the Cowboys offensive line when it comes to blocking for Ezekiel Elliott. The Cowboys star running back had one of his worst outings in terms of efficiency as he only rushed for 2.3 yards per carry.

But it wasn’t Zeke’s fault. He just didn’t have space to run. The offensive line was constantly missing on blocks and allowing Vikings defenders to have a free shot at Elliott. Connor Williams and Travis Frederick struggled holding off their man, leaving Zeke in bad shape.

Dak throwing on the run was a thing of beauty

Let’s finish this on a high note as we take a moment to appreciate just how incredible Dak Prescott played. I don’t know if I remember seeing so many great throws in one game from a quarterback on the run.

Dak’s footwork was very impressive. He did a great job launching in the pocket as well as he set his feet and fired bullets into tight windows. But my favorite throw of his was when he did a simple side step to his left to free up a clear throwing window to hit Randall Cobb. Nothing fancy, just good quarterbacking.