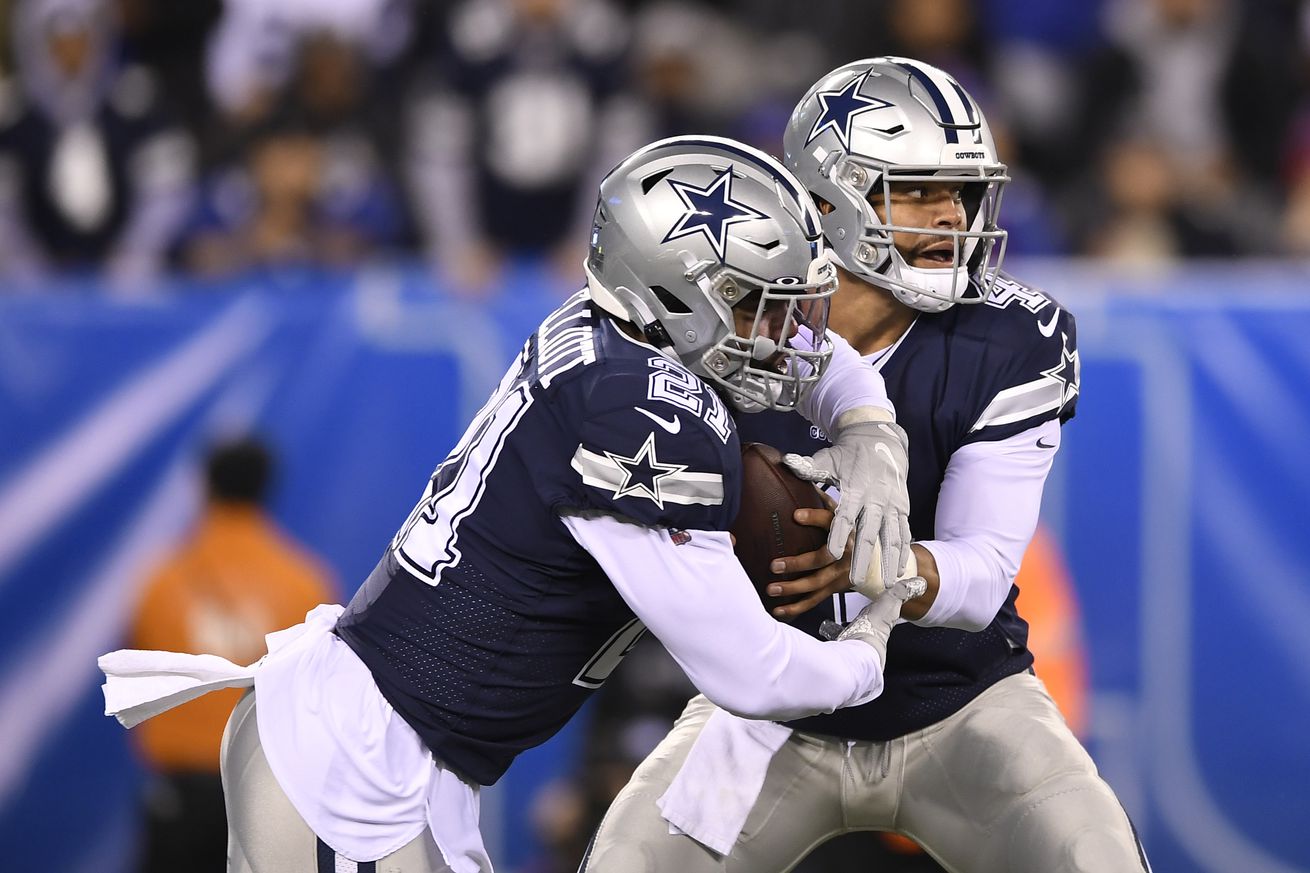 How a traditional measure of success may be the trap the Dallas staff has fallen into.

Frustration is rampant in the fanbase of the Dallas Cowboys after the loss to the Minnesota Vikings. There is a large and growing sentiment that this one was strictly on the coaching staff, particularly on offense. The perception is that a stubborn insistence on using the run led to an absolute waste of a remarkable passing game from Dak Prescott, Amari Cooper, and Randall Cobb.

Normally, this weekly look into the numbers from the last game takes a broad approach, but this time, it seems appropriate to delve into that one thing. Along the way we may get a bit of insight into what is going through the minds of Jason Garrett and perhaps Kellen Moore, and just where a traditional bit of football thinking may be leading them down the wrong path.

First, a look at some of the overall offensive numbers.

It looks fairly obvious here. Passing the ball was where the Cowboys racked up the yards (and all three touchdowns) while running the ball was basically doing nothing for them.

So why would “establishing the run” still be an objective, as stated by Garrett? Why would Moore continue to call Ezekiel Elliott’s number at all down the stretch?

Well, there is an old concept of what constitutes a successful play. It is based on how much of the yardage needed for a first down is gained on a play, and the definition of success is based on what the down is. For a first down play, this rule says that if you gain 40% of the yardage, or four yards on a first and ten, you have succeeded by getting to a “manageable” second down. The rate on second down is 50%, and obviously it is 100% on third down.

There is an ongoing discussion about just how valid the whole idea is. I’m willing to bet this is still the way Garrett looks at things, which means that the whole offense does as well, whether or not all of the staff really agrees with this. (I, for one, would love to be able to get an honest opinion about this from both Moore and Jon Kitna.)

Using that criteria, I looked at every offensive play the Cowboys ran against Minnesota. Here is what I came up with.

Under the old way of looking at success and failure, running the ball actually was not such a bad idea. In the first quarter, the team was actually successful on more occasions when they ran than when they threw it. Overall, things tilted the other way, but it is interesting to note that they still had nearly as many unsuccessful passes as successes.

That is why this whole idea is fallacious. Here’s the simplest way to explain it. If a team runs the ball three times in a row on a series, and gains four, three, and two yards respectively, they fail to convert and likely punt. But the first two plays were successes under this metric. So they succeeded 67% of the time, and would be wise to continue running.

Under that concept of success and failure, all incomplete passes and sacks are obviously failures, which is why the Cowboys were so near the 50% mark throwing the ball. What it completely leaves out is the effect of passing beyond the sticks and the impact of getting bigger gains per successful play than running achieves. Look at the passing chart for Prescott (from NFL Next Gen Stats):

Look at how many of the completions were for 10 yards or more. Not all quarterbacks do it this way, but Prescott has seen the light. Yet there are still people who criticize him for not throwing it deep enough. (It is worth noting there was very little YAC in this game, partly because Prescott was working the sidelines so effectively.) Conversely, none of the runs in the entire game got ten or more yards.

That is a very simplified way of stating the arguments in favor of early down passing. You gain more per pass play, and even if you have an incompletion on first down, if you can just hit on second or third down past the sticks, you keep the drive alive. Running the ball is far less productive, and really is only a preferable option in short yardage IF your running game is showing any level of production at all.

As the game progressed, the mix swung heavily towards the pass, but that is forced when you wind up in second/third and long a lot, plus being behind on the scoreboard. Even though they were forced into throwing, it was successful, far more than handing the ball off was at any point in the game. Which makes the decision to hand it off twice in the red zone with a chance to win even more maddening.

Then, add in that Prescott, despite a relatively low completion percentage, had a remarkable game. He was making some nearly impossible throws, especially when Cooper was on the receiving end.

I had an odd flashback looking at those incredibly placed passes and amazing catches. It was another time when a quarterback was making ridiculous completions to a receiver that defied physics in getting his feet down. Only it was against the Cowboys. I am talking of course about Aaron Rodgers and some of the back-breaking throws he made in the past. Like this one that ended things back in the playoffs following the 2016 season.

Sorry for inflicting that painful memory on you all, but suffering through it is worth it to begin to understand just what level Prescott has reached. When he not only does something so reminiscent of the highly regarded Aaron Freaking Rodgers, but does it seemingly on demand, it bodes well for his future.

If only the staff can realize just what they have and fully employ it. This article works on some somewhat nebulous assumptions, but I do think there is some validity to them. The Cowboys are being hampered by some behind-the-times thinking. That probably is mainly due to Jason Garrett and what has evolved into a very conservative streak, especially against good competition. That unfortunately may be rubbing off on Moore, although it is always unknown just who is really pushing things in that direction.

Most disturbingly, just looking at the success and failure rates in the big chart doesn’t really make the argument that it is time to make the offense run through Prescott instead of Elliott, especially in light of how the game evolved. The run was actually working just fine in the first quarter – if you accept the whole premise that four yards is a desirable outcome on a first down run.

Maybe that is still a working premise for Dallas. Therein lies the rub. It needs to change for this team to succeed the rest of the year, at least in terms of meaningful success, like winning something other than just squeaking into the playoffs and maybe winning a wild card round matchup.

And frankly, the fear is that it won’t.