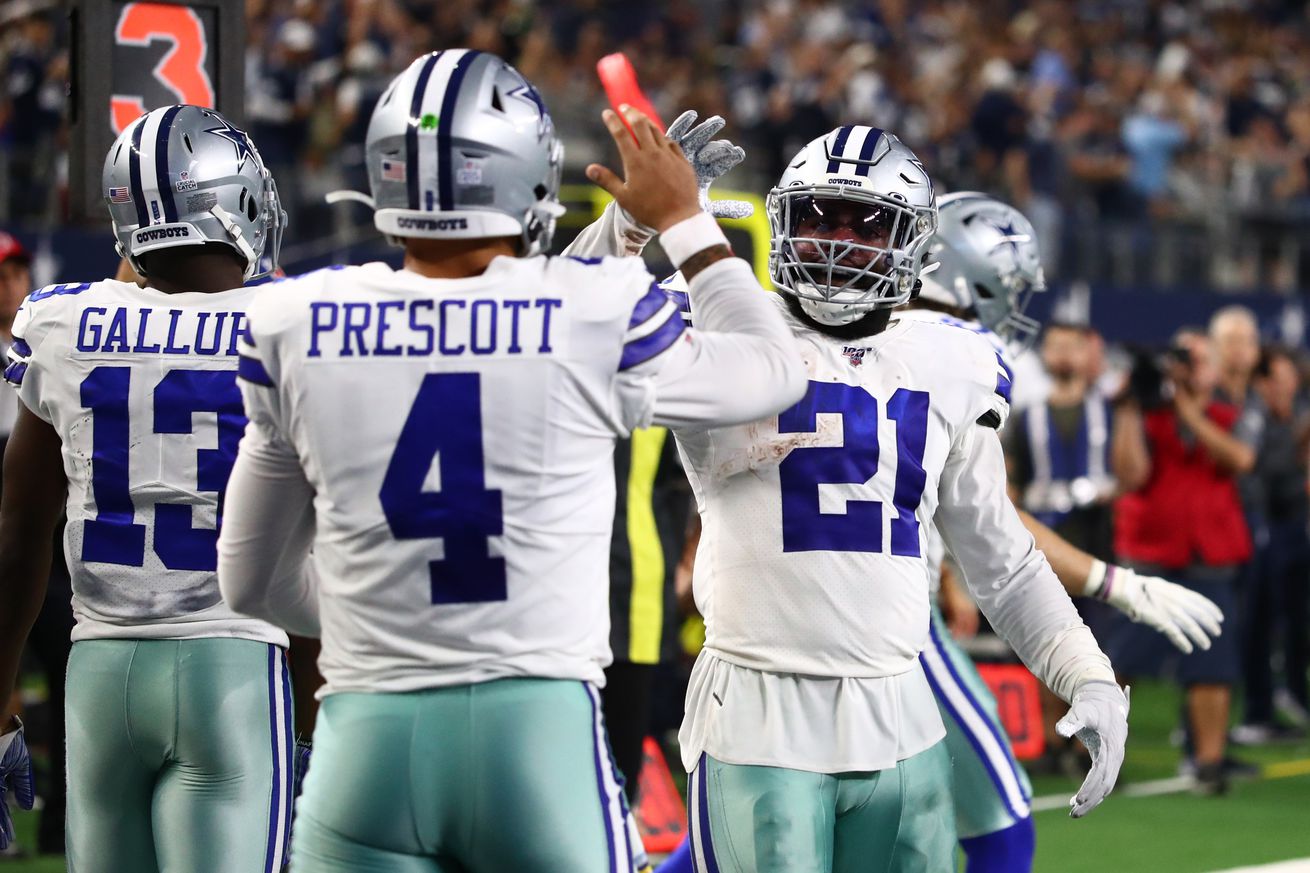 Check out today’s news about your Dallas Cowboys.

Eatman: Using the 5 Ws to Figure Out The 5 Ws – Nick Eatman, dallascowboys.com

Diving deeper into come common themes from the Cowboys five victories this season.

Oh, I’m sure many of you are throwing out “coaching” as a good excuse. Not saying you’d be completely wrong, but then again, it’s the very reason people say it. It’s hard to prove. It’s also the same reason why fans love to blame things like “leadership” and “chemistry” as reasons a team struggles. Sounds good, but it can’t be proven, especially from us on the outside of the locker room.

Not saying those things aren’t factors. It’s just hard to pinpoint as specific answers to this team’s problems.

Going back to coaching, I do think Jason Garrett and his staff have to be blamed for the way the Cowboys have started most of these nine games. Other than the Eagles win, this team has struggled out of the gate in just about every other game. Yeah, you can catch up on the Giants (twice) and Redskins and Dolphins, but it clearly doesn’t work against some of the other teams. All this energy it takes to get back in the game sometimes makes it even harder to get over the hump.

Yeah, credit the Cowboys for making adjustments and getting themselves back in the game, but why does have it to go there every single week?

Can the Cowboys outlast the Eagles to win the NFC East and reach the postseason? – Staff, Dallas Morning News

Do the Cowboys still have what it takes to win the NFC East and make it to the postseason?

It’s probably safe to say the Cowboys’ offense, overall, has met expectations. The defense? Not so much. What seems to be the biggest issue for the defense?

David Moore: The defense has been the most inconsistent part of this inconsistent team. A lack of turnovers is the primary culprit. But it goes deeper. Slow starts on both sides of the ball have minimized the ability of this defensive line to rush the quarterback, an area that should be a strength. Linebackers Leighton Vander Esch and Jaylon Smith have not had the impact they did last season. Cornerback Chidobe Awuzie has become a frequent target. His performance has also deteriorated from last season.

Calvin Watkins: They have so many issues, but pass coverage takes center stage here. Chidobe Awuzie has struggled this year, same with Byron Jones, though he’s played better than his counterpart. It took the Cowboys too long to insert Jourdan Lewis into a full-time role and the safety play is spotty. The linebackers are inconsistent in pass coverage, too, so let’s not forget them. Dallas can’t fix these issues now, the draft and free agency will be avenues where the Cowboys can solve the pass coverage. Of course, coaches will tell you interceptions are created by pressure up front, but too many times you don’t see the defensive backs make plays on the ball. If the Cowboys want to go far in 2019, the pass coverage must improve.

Film room: Why the Cowboys should be encouraged by Travis Frederick’s play this season – John Owning, Dallas Morning News

Despite a tough start to the season, Travis Frederick is looking more like his old self as the season wears on.

In 2018 without Frederick, the Cowboys finished 22nd in the NFL in pass-blocking efficiency (84.1), which measures pressure allowed on a per-snap basis with weighting toward sacks allowed, according to Pro Football Focus. This year, with Frederick in the fold, they rank 13th (85.3; a substantial 1.2-point improvement).

Moreover, Prescott in 2018 was sacked 56 times (second most in the NFL) while the Cowboys’ offensive line finished 28th in adjusted sack rate (9.7%), which represents sacks divided by pass plays and adds adjustments for opponent quality, as well as down and distance, according to Football Outsiders. There has been a precipitous drop in both categories this year, as Prescott is on pace to be sacked around 20 times (currently at 11) while the O-line currently ranks second in adjusted sack rate (4.0%).

While a good portion of this should be attributed to Prescott’s improvement in manipulating the pocket, Frederick’s individual play and ability to get the O-line lined up correctly and on the same page also deserves a good bit of credit.

Frederick’s presence has also been an enormous boost to the run game.

Witten fine in return to Cowboys but Jarwin deserves to play – Mac Engel, Fort Worth Star-Telegram

Has Jason Witten’s return hindered the progression of Blake Jawrin?

After nine games it is evident the Cowboys need to see more of Blake Jarwin. He has been in only about 34 percent of the Cowboys’ offensive snaps this season.

“I understand where I am at in my career and I’m trying to just soak in as much as I can,” Jarwin said. “He’s done a great job with me, walking me through everything. What I see on a field. What he sees on the field.

“I’m still a young guy. I’m a third-year player, but this is really only my second year playing. I have a lot to learn and I need experience. Just being out there with (Witten) is big for me.”

Blake Jarwin does damage when he catches the ball. Never was that more evident than the Cowboys’ loss on Sunday night against the Minnesota Vikings. Witten had two receptions for 17 yards. Not included in his stats was one reception that the Jason Witten of old would have made, but the older Jason Witten did not as it was batted out of his hands. Jarwin caught three passes for 35 yards.

Ezekiel Elliot still believes his team is capable of making a deep postseason run after a 5-4 start.

When times are good, it’s a fairly jovial atmosphere. When the Cowboys lose in heartbreaking fashion, not so much. All the more motivation for Elliott to help his team regain that winning feeling.

“Go win Sunday and you guys won’t be too disappointed next Wednesday,” he joked. “If we win, you guys think we’re the best team in the world; if we lose, oh no. So we’ve just got to go out there and win.”

It’s been a season of streaks to this point in the year, which helps explain the mood swings that surround the Cowboys. They won three straight to open the season, then they lost three straight. That turned into a pair of wins against New York and Philadelphia, before this latest setback – which the Cowboys can’t afford to allow to extend.

The taste is especially bitter for Elliott, who suffered one of the most frustrating nights of his career in that 28-24 loss.

Is the road ahead for the Dallas Cowboys really that difficult?

The Dallas Cowboys’ ability to bounce back from adversity is one reason, the other comes down the who they are playing. Yes, many including myself said that the Cowboys game with the Minnesota Vikings was a game they needed to win because of the teams they face next. But, some of those teams have been quite shaky lately, including the Eagles.

The Cowboys’ opponents the rest of the season are at the Detroit Lions, at the New England Patriots, the Buffalo Bills, at the Chicago Bears, the Los Angeles Rams, at the Philadelphia Eagles, and the Washington Redskins.

Now at first, you’d see six teams out of the seven that could help knock the Cowboys out of playoff contention. But the more I looked at these teams the more I started to feel better about the Cowboys chances if they can exploit each of these teams’ weaknesses.

Both Elliott and Barkley even saw a below average rate of loaded box counts, per NFL’s Next Gen Stats. That being said, there is still evidence that Elliott isn’t entirely to blame for the lack of a run game in Dallas this week.

Of Elliott’s 20 carries, 15 of them came with 10 yards to go. He averaged 2.9 yards per carry in these situations and never gained more than six yards on a given run. It was an ineffective ground game that the Cowboys simply refused to get away from throughout the game. Despite a 57% success rate in the air on 14 first down throws, Dallas elected to run the ball 16 times with a 12.5% success rate.

The point at which Dallas’ commitment to the run game proved to be a fatal flaw came in the Cowboys’ final drive (excluding the hail mary drive in the final 24 seconds). Dak Prescott threw for eight yards on first down, only to watch Ezekiel Elliott, in his first short yardage carries of the day, run for 0 and -3 yards on the next two plays. That was enough to drop Dallas’ win probability nearly 25%.

One possession games were something the Cowboys thrived in last season. How are they doing in them in 2019? We discuss on the latest episode of The Ocho.