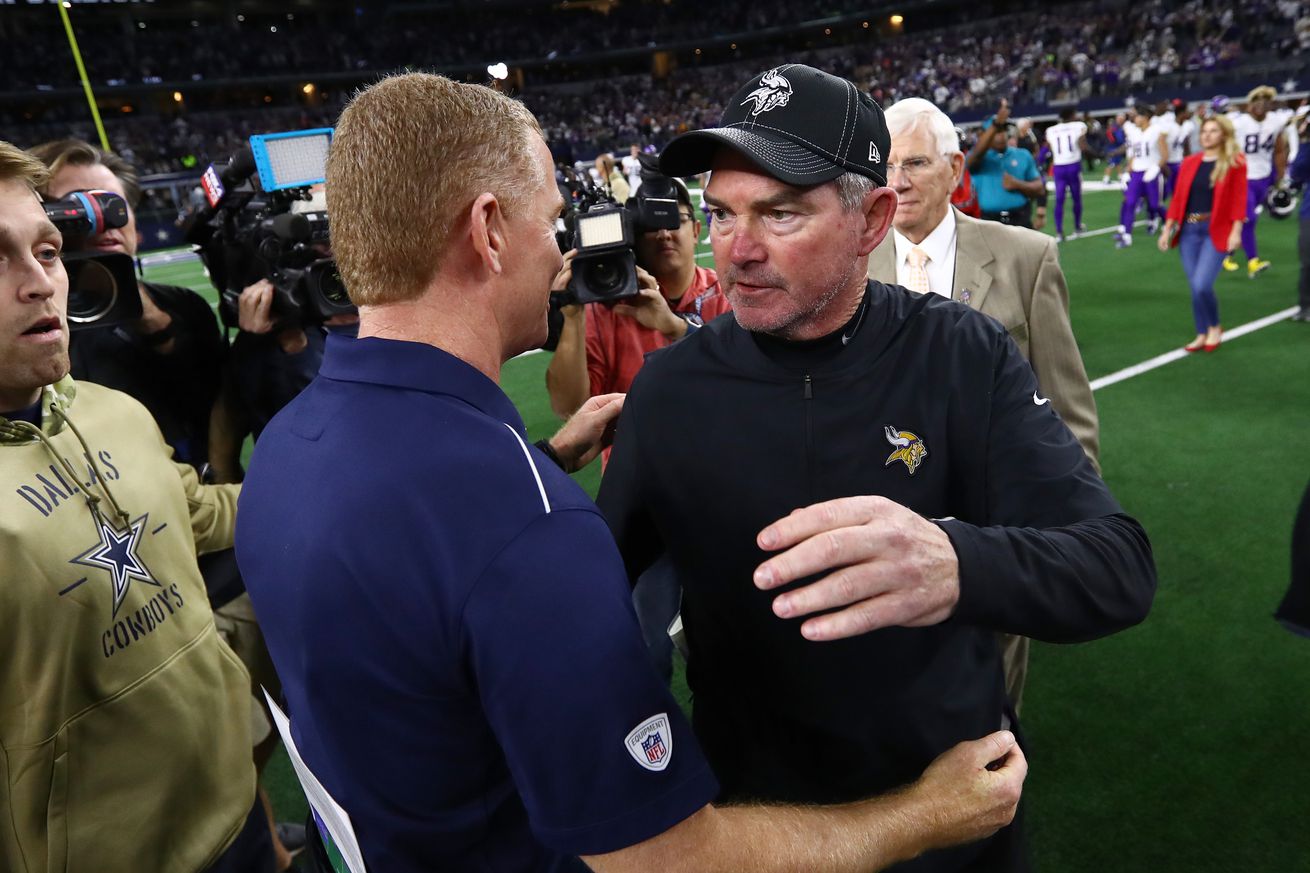 The Cowboys still have attainable goals despite the struggles in several games.

Despite 5-4 record, Cowboys are still in prime position for playoffs- Mickey Spagnola- DallasCowboys.com
Losses sting but the Cowboys are not eliminated from the postseason, they actually have a really good path.

The loss drops the Cowboys to 5-4, having gone 2-4 since getting off to that season-opening three-game winning streak, panic permeating the air. As if all is lost.

Look, understand no one is happy out there. Well, there is no one inside these walls at The Star overly happy either, but at least they have not thrown in the towel, as if indeed all is lost.

They can’t afford to think what could have been or what should have been. They have to deal in the now, meaning getting ready for this stretch of playing three of the next four games on the road, starting at Detroit on Sunday, then back-to-back games against teams with winning records, New England at 8-1 and Buffalo at 6-3, followed by a trip to Chi-Town.

Ezekiel Elliott’s message to Cowboys: ‘It’s on us to turn it around’ – Todd Archer- ESPN
The Cowboys All-Pro Ezekiel Elliott puts the onus on the players to get a sense of urgency to make the postseason.

Entering Sunday’s 1 p.m. ET game against the Detroit Lions, the Cowboys remain in first place in the NFC East based on their undefeated division record, but Elliott said he is not surprised his team is in this position.

Is it time for the NFC East leading Cowboys to panic? Ezekiel Elliott, Travis Frederick don’t think so- David Moore- Sportsday DFW
Two of the Cowboys best players believe it’s foolish to panic with plenty of football left to play.

Center Travis Frederick characterizes the current mood of this team as somewhere between positive and super serious.

“You get excited because you have a 3-0 start,’’ Frederick said. “You feel really good about where things are going, especially on the outside, everyone is like, ‘Wow, this team is something special.’ And then you take three losses then all of a sudden we’re the worst team in the league.’’

“We’re 5-4 and we need to win this game to continue to put ourselves in a spot to make the playoffs,’’ he said. “That’s what it’s really about is getting a spot. Obviously, you want to be the top dog and get a bye and you want to win the division. You don’t want to get in as a wild card. But you’ve got to get in. That’s the key.”

“Then from there, you never know what is going to happen. You see that all the time. There are things that can make it easier, like I said, getting a bye and what not. At the end of the day, you’ve got to get enough wins to get into the playoffs.’’

“We should have done a better job communicating with him. In that situation, you want to err on the side of fair catch,” Garrett said. “You don’t want to spend a lot of time pulling time off the clock by having a return that gets you five or six yards. You want to go in the with the mindset of ‘Let’s fair-catch this thing around midfield and give ourselves a chance.’ The discussion should have been more complete in saying ‘If you get to a situation where you do have a low kick and you can get north and south quickly and gain yardage, do that.’ We didn’t communicate well enough with the player.”

How Jason Garrett has failed to rise to the challenge of a “prove it” year – Michael Strawn- Blogging The Boys
With one of the most talented rosters, Jason Garrett is disappointing in a prove-it year for the Cowboys.

Two of the teams losses (New Orleans and New York Jets) have seen Dallas play extremely conservative on offense. In both games, Jason Garrett seemed to feel his offense couldn’t be trusted to make plays. So we saw a lot of run plays and lots of short passes. A few stats to illustrate the point:

Against the Saints the Cowboys run game ran 20 times for only 45 yards. Repeatedly they handed the ball off despite achieving no success.

Against the Jets the Cowboys ran on 59% of first down. That’s not egregious if you’re ahead or in a close game. But the Cowboys never led this game and trailed 21-3 by late in the second quarter. Repeatedly running on first down while down multiple scores is perhaps the most Jason Garrett thing ever.

Banged-up Lions face lethal Dallas Cowboys’ offensive trio in Week 11 -Benjamin Raven- M-Live Detroit
The Lions have a ton of injuries headed into this game with a talented Cowboys team coming to town.

The Cowboys lead the best offense in the league in terms of yards per game, while ranking inside the top five in both rushing and passing. Pro Football Focus rates Dallas’ offense as tops in the league with its defense holding down the No. 10 spot.

“Ezekiel Elliott is a phenomenal player and they have great offensive linemen upfront that really create a lot of holes. Just phenomenal as far as that’s concerned,” Lions coach Matt Patricia said on Wednesday. “I think they’re doing a great job. Dak Prescott’s doing a great job as far as running that offense right now, keeping things moving at the line of scrimmage, so that’ll be a big challenge for us, too.”

On the other hand, Detroit’s defense is ranked among the worst in the league in terms of points, and passing and rushing yards allowed per game. The Lions are also severely banged up with safety Tracy Walker missing the last two games, and defensive ends Da’Shawn Hand and Romeo Okwara missing Week 10′s game in Chicago.

And if it wasn’t at his alma matter, people assumed he’d end up working somewhere with former Lions offensive coordinator Scott Linehan, which he did, in Dallas.

“He was obviously a really smart kid, creative kid,” Stafford said. “And he just had that quality about him. Good leader, and you could tell he was going to be able to stand up in front of a room and put a game plan together, so I’m happy for him.”

3 & Out: It’s Time To Stop This Dak Prescott Narrative- Rob Phillips- DallasCowboys.com
Dak Prescott is just too good to be placed in a box with labels, the Cowboys’ QB is having a great season.

Prescott’s 46 pass attempts Sunday were the second-most of his career in a non-overtime game. He had 54 in the Cowboys’ OT win over Philadelphia last year. He had 50 in a 2017 blowout loss to Denver in which Elliott ran 9 times for a career-low 8 yards.

The Vikings didn’t sell out to stop the run on every single play Sunday, but they did allow some favorable matchups in the passing game. Prescott capitalized. He completed 9 passes of at least 20 yards, tying a season high from the Green Bay game. He also avoided the rush several times, buying extra time with his feet and making accurate throws on the move.

Make no mistake, Elliott’s role is vital. The offense has been at its best with more of a 50/50 pass/run split. But for anyone still holding onto the ‘make Prescott beat you’ theory, it’s time to put that one to bed.

Dallas Cowboys: Making a case for Dak Prescott to be in the MVP race- Steven Ruiz- ForTheWin
The media has an issue giving Dak Prescott his due but the man deserves it.

Dak’s supporting cast is great and props him up

This might be the argument you’ll hear most often, and while I will concede that Dak certainly has a good supporting cast, I don’t think it’s one of the league’s best.

The Dallas offensive line is routinely hailed as one of the best in the league, but it’s been inconsistent during Dak’s career, and, heading into Week 11, it ranks 15th in ESPN’s pass block win rate metric. When the offensive line has faltered, Prescott has been among the best quarterbacks in the league anyway. He’s averaging 0.15 EPA per attempt under pressure, which ranks fifth in the league.

The receiving corps has also received praise this season, but only nine teams have dropped more passes than the Cowboys have. Dallas ranks 13th in yards-after-catch and Prescott ranks second in average air yards per completion, so he’s doing a lot of the work. And it’s not like Cowboys receivers are getting open for him; only five starting quarterbacks are throwing into tight windows more often than Prescott is, this season per Next Gen Stats.

Let’s take it one step further: What happens if you take out Dak’s throws to his two biggest weapons, Cooper and Elliott? Not much, it turns out. His average EPA per attempt is still among the league’s best at 0.27.

What Might Make The Run Game More Effective For The Cowboys? -DallasCowboys.com
The Cowboys insistence on running the football got them beat by Minnesota but how can they run more effectively even in games vs. good run defenses?

“We can make some adjustments in our run game and give us some better results,” he said. “I see us utilizing what we’re basically developing, and that’s the ability to use our quarterback and run-pass option game. That’s going to, with some adjustments we can make in our blocking, that we can do better than we did Sunday.”

Jones raises a point that has come up a lot in the past two days. Sunday marked just the fourth time in his 60-game career that Dak Prescott did not have a rushing attempt. Heading into that game, he had 27 attempts on the season for 175 yards – a career-best average of 6.5 yards per carry.

For an offense that was stopped on a fateful 4th-and-5, perhaps that could have made the difference.

That said, Jones wasn’t overly critical of the Cowboys’ performance. For all the talk of the Cowboys not passing the ball enough, he pointed out that Prescott’s 46 attempts were the most this season.

We’re two days away from gameday. Get ready for it with the latest episode of The Ocho.