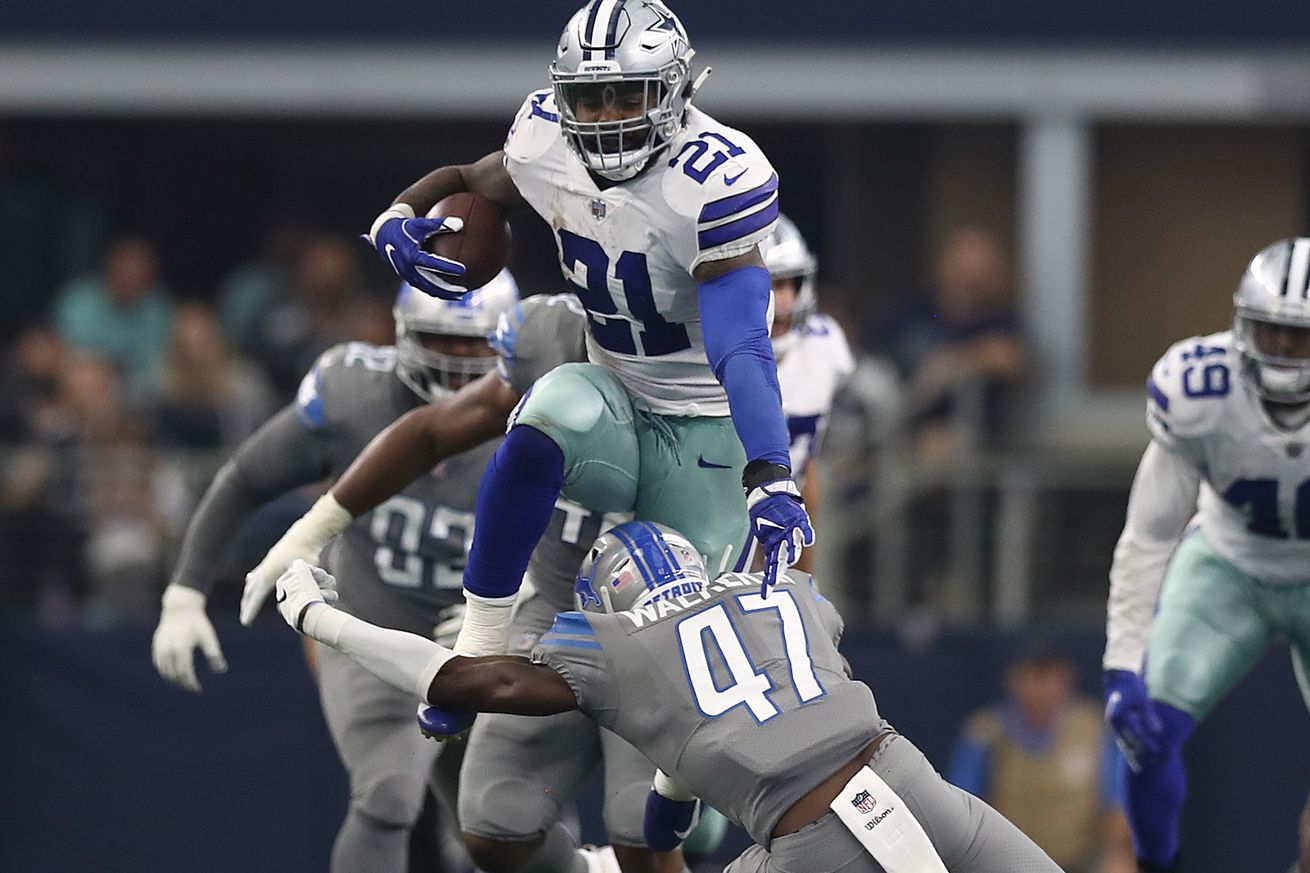 What will you be looking for on Sunday when the Cowboys head to Detroit?

The Dallas Cowboys really need to come out of Sunday’s game with a win; four of their next five games are against playoff teams from a year ago, including both participants in last year’s Super Bowl. With the Philadelphia Eagles tied with them atop the NFC East, every game matters, so this game definitely has a must-win aroma to it.

For the Detroit Lions, things started off well with wins over the Eagles and Los Angeles Chargers. They went into Week 4 undefeated, but have since lost five of their last six games and it’s looking more likely that they’ll miss postseason action for the third consecutive season.

It’s a big game for both teams, but what’s it going to take for the Cowboys to get the dub on Sunday? Here are five things to watch when the Cowboys head to the motor city this weekend.

1. No excuse to not unload offensively

This week’s contest will feature an offense that is averaging over 400 yards a game versus a defense that is surrendering over 400 yards per game. The great defensive output we’ve grown accustomed to by Matt Patricia in New England is clearly not happening with the team he’s now the head coach of. That shouldn’t be much of a surprise here as the Patriots regularly cycle through great talent on their football team. The Lions are definitely talent deficient on defense.

So, what’s stopping the Cowboys offense from driving up and down the field on this porous defense? Nothing. But that doesn’t mean they’re guaranteed success. The Cowboys find cute ways of not translating those yards into points so it’s not a foregone conclusion that the Cowboys will roll against Detroit.

The table is set for the Cowboys offense to have a big game and there is no reason they shouldn’t find the end zone plenty of times on Sunday.

The Lions defense is susceptible to the pass as they rank 28th in passing yards allowed this season. But they also have problems defending the run, ranking 27th in the league in rushing yards allowed. While it would be a welcoming site to see the Cowboys offense be aggressive and swiftly move up and down the field, don’t hold your breath on that happening. Instead, they’ll give Ezekiel Elliott plenty of opportunities to have a nice rebound game.

The offensive line will feature backup guard Xavier Su’a-Filo making his first start of the season in place of Connor Williams. Last year, Su’a-Filo stepped in and played well in William’s absence. In fact, as our own RJ Ochoa indicated earlier this week, Zeke actually performed better with Su’a-Filo playing guard.

Pass protection might be something to keep an eye on, but the ground attack could end up being a little better.

For the second straight week, the Cowboys were all set to face a quarterback who has quietly been having a great season. The Lions Matthew Stafford leads the league in touchdown passes per game, is second in yards per game, and rounds out the top five in quarterback rating.

But the Cowboys catch a break this week as Stafford will not be playing as he has been ruled out as he’s dealing with a back issue. Dallas has been very fortunate when it comes to dodging a key player from their weekly opponent as Stafford is the latest to make this list.

Players the Cowboys have avoided this season (INJ, SUSP, or TRADE):

Despite not having Stafford, don’t write off the Lions offense as being unable to make some noise. Backup quarterback Jeff Driskel has a strong arm and isn’t afraid to let it loose, and luckily for him, he has some talented receivers that can make plays. Only one wide receiver has more touchdown receptions than Amari Cooper and that receiver is Lions’ Kenny Golladay. He could be a problem.

Not only does Driskel have Golladay, but there are some other good targets as well, including Marvin Jones Jr., Danny Amendola, and tight end T.J. Hockenson. And Driskel has some pretty good mobility, so don’t be surprised if he uses his legs to extend drives.

Stafford isn’t the only key offensive player they’ll dodge in this matchup as starting running back Kerryon Johnson is on injured reserving after having knee surgery last month. That means the Lions will lean on Ty Johnson and J.D. McKissic to handle the backfield responsibilities. While the Lions don’t have much of a rushing attack to bring about great concern, they could resort to using their backs in the receiving game.

Darrell Bevell and J.D. McKissic are reunited and it feels so good pic.twitter.com/vOhYqQhap9

The Cowboys struggled in the screen game against the Vikings last week, and McKissic has the ability to be a problem in space.

The Lions signed former New England Patriots Trey Flowers to a five-year, $90 million deal this offseason. Flowers is coming off a stretch where he’s had four sacks over the last three games and has been arguably the Lions’ best defensive player over the last month. He’ll lineup opposite Tyron Smith, who has been up and down this season as he’s been playing through injuries. If Smith is not on his A game, Flowers has the talent to wreck things for the Cowboys offense.

Speaking of big money deals, DeMarcus Lawrence got paid this offseason as well. While Tank hasn’t lit up the stat sheets, he’s been up to his usual tricks this season, causing a bunch of ruckus in the trenches. He’ll get an easy assignment this week as swing tackle Tyrell Crosby will be thrown into action because right tackle Rick Wagner (concussion) is out. This could open the door for a big game from Lawrence, and the last time he faced the Lions he recorded a career high three sacks.

What will you be watching for on Sunday?