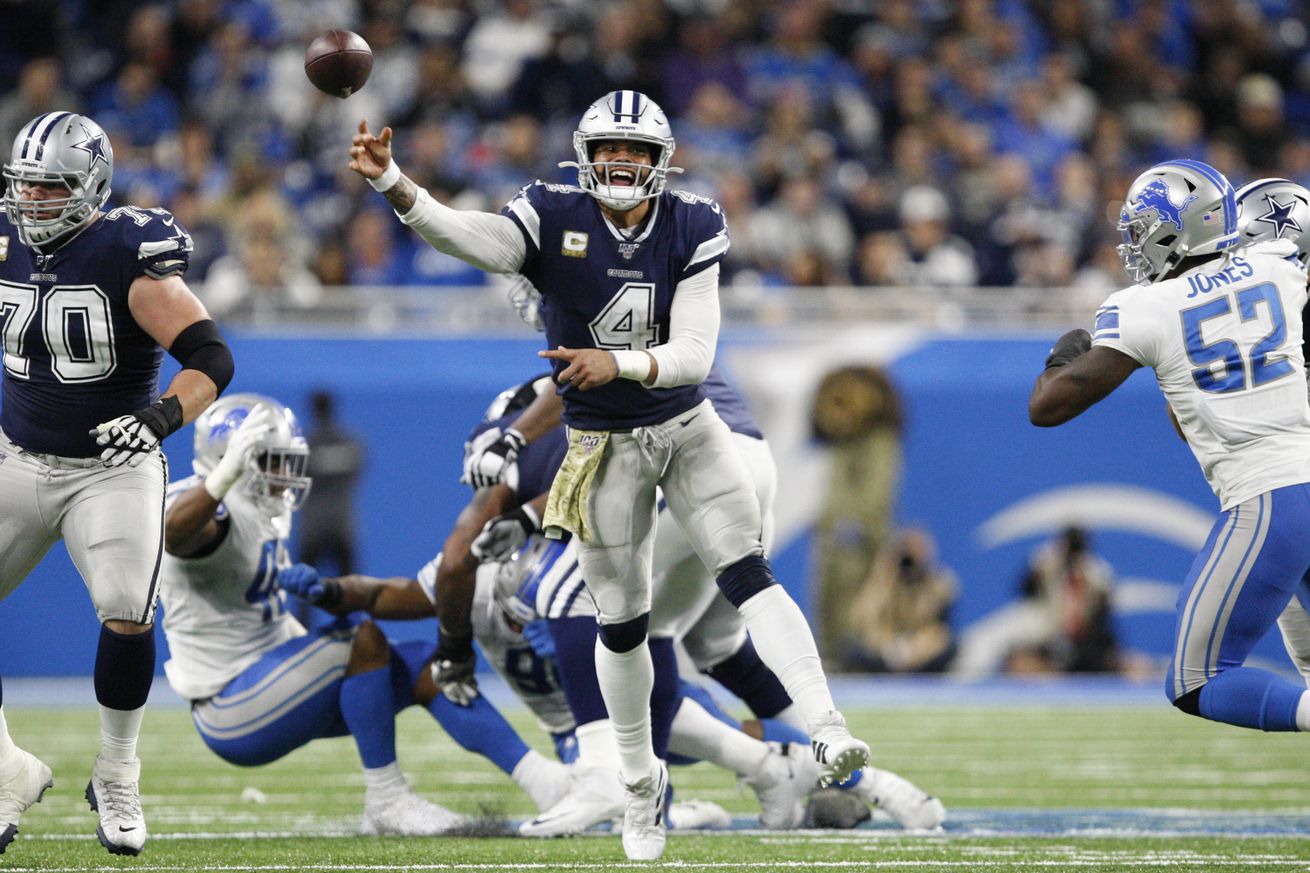 All of the latest coverage from the Cowboys’ 35-27 win.

Dallas made it tougher than it had to be on Sunday, but the team pulled through and got the win on the road. Tom recaps the victory.

The Dallas Cowboys needed a win against the Detroit Lions badly. And in a sense, win badly was what they did in hanging on to escape, 35-27. It was their first one-score margin of victory of the season.

It really shouldn’t have been this close, if you look at the stats. The Cowboys had 509 yards of total offense, including 434 through the air. That is really the story of what went right, because this game was won in that one aspect, the Cowboys’ passing game. Dak Prescott was once again on fire. This was despite Amari Cooper being somewhat limited in this game, both in his capability to perform on the field and being off the field for a lot of plays. This game, that hardly slowed things down, as both Michael Gallup and Randall Cobb stepped up, big time. Gallup had over 100 yards before halftime and finished with 148, and Cobb joined him in the third quarter as well as getting a touchdown on his way to 115 total. The coaching staff also showed that they at least have a clue about what they can do with Tony Pollard, as he scored the first Dallas touchdown and got their first lead of the game on a 21-yard reception where he stepped right out of an ankle tackle.

Many believed the Cowboys ran through Zeke; however, 2019 is showing us that the team really goes through Dak Prescott.

Since 2014, the Dallas Cowboys’ offensive DNA has been their run game with DeMarco Murray and Ezekiel Elliott leading the league in rushing in 2014, 2016 and 2018. With the way quarterback Dak Prescott is playing, that appears to be changing.

Prescott threw for 444 yards on 29 of 46 passing and had touchdown passes to Randall Cobb, Tony Pollard and Elliott in the Cowboys’ 35-27 win against the Detroit Lions (3-6-1).

This was a must-win for the Cowboys (6-4), who had lost four of their past seven games, considering the Philadelphia Eagles are nipping at their heels in the NFC East and their wild-card chances are almost nil.

And Prescott was at his best.

In the first half, Prescott threw for 274 yards, the most in a half in his four-year career. He hit seven different players and did not need to rely on Amari Cooper, who had just one catch for 7 yards in the first half.

In the second half, the Cowboys almost exclusively went to Prescott. Elliott had only six carries in the third and fourth quarters.

Cowboys turn keys over to Dak Prescott, who’s the leading man in victory over Lions – Clarence Hill, The Star-Telegram

Dak Prescott has the keys to the Cowboys.

This is now Dak Prescott’s team.

The Dallas Cowboys officially made the transition from running back Ezekiel Elliott and the ground game being the foundation of the offense and their success to Prescott and the passing game in Sunday’s 35-27 victory against the Detroit Lions at Ford Field.

Let it be written.

Prescott now has four games with more than 375 passing yards and three or more touchdowns this season, tying Hall of Famer Joe Montana for the second-most in a single season in NFL history. Only Peyton Manning (six in 2013) had more.

Prescott tied Montana (4 in 1990) for the most games with at least 375 passing yards and two more touchdowns through their team’s first 10 games of a season in NFL history.

The offense had itself a day.

The Cowboys’ offensive engine was revving in this one. With Dak Prescott the driving force, the unit racked up 509 yards of total offense, averaging 7.2 yards per play and converting 62 percent of their third-down chances. For his part, the quarterback finished with 444 yards passing, the third-highest total of his career, with three touchdowns and no interceptions for a 116.6 passer rating.

Prescott connected with seven different targets, none more so than Michael Gallup, who hauled in nine passes for 148 yards, both game highs. He was joined by Randall Cobb, the veteran wideout topping the century mark for the second straight game, totaling 115 receiving yards.

One of the biggest reasons for the Cowboys’ electric offensive day was second-year wideout Michael Gallup. The wide receiver honored his brother during his big nine-catch, 148-yard performance on Sunday.

When Dallas Cowboys wide receiver Michael Gallup woke up Sunday morning, he said he spoke to his brother, Andrew.

”I was like, Andy, we here, baby. Got to go play some ball,’” Gallup recalled while walking up the tunnel inside Ford Field to the team buses after Dallas’ 35-27 win over the Detroit Lions on Sunday. “I told him, ‘We’re going to play the game for you, make sure we have a game.’

Tremendous effort by Michael Gallup to pick up the slack for Amari Cooper. This is the type of game they needed from him when Cooper was banged up in the Jets loss. It was clear that the Lions’ plan was to not allow Cooper to beat them by travelling cornerback Darius Slay with him. Good for Dak Prescott recognizing that and not forcing the ball to Cooper, thus eliminating potential mistakes. Gallup was up for the challenge and was able to deliver when his guys needed him the most.

I thought that Pat Mahomes and Drew Brees threw the ball at different arm angles, but what a display by Prescott to do the same. There were several snaps where he had to almost drop down sidearm in order to get the ball to his receiver. The pass he threw to Ezekiel Elliott on the screen that ended up a touchdown might have been the best pass he threw all day. Elliott did a great job adjusting to the ball, which was low, but that was the only spot Prescott could have thrown it due to the defender in his face. Just a heck of decision to make that throw in order to give his guy a chance.

Lions corner Darius Slay said that “it is tough to account” for all of the weapons that the Cowboys have.

The two-time Pro Bowler completed 29 of 46 passes. He threw a 21-yard TD pass to Tony Pollard early in the second quarter and a 19-yard pass to Randall Cobb with 27 seconds left in the quarter, giving him a career-high 274 yards passing in a first half.

“They have a bunch of guys who can make plays and it is tough to account for all of them,” Detroit cornerback Darius Slay said. “There were plays where I thought we had them shut down, but someone would get open by a step and Dak would hit the throw or he’d get out of the pocket and run.”

Prescott threw for 444 yards and three touchdowns in a 35-27 victory over the Lions that was closer than it should have been.

In the past two games, Prescott has 841 passing yards to set a team record to go with six touchdowns and an interception.

The Cowboys, who entered as the top offense in the league, had 505 total yards. Michael Gallup caught nine passes for 148 yards, and Randall Cobb had four receptions for 115 yards.

With Dak Prescott playing like this, everything is possible for the Cowboys. Even the Super Bowl – Dan Wetzel, Yahoo! Sports

Dak is good enough to lead the Cowboys to the Super Bowl, writes Wetzel.

Here is what is fair: he’s good enough, enough of the time, for Dallas to win that long-awaited Super Bowl. And at 6-4 this season, despite so many roller-coaster dips, that goal and every other one is still on the table for the Cowboys.

During his past four games, three of them victories, he has played some of his best football — a QB rating over 100 in each game, 10 TDs against just three picks and, maybe most important, critical plays completed when needed.

This was a day when the Lions took away Elliott and forced Prescott to beat them. To make it even tougher, they (or Slay) mostly took Cooper away (just three catches for 38 yards) and made Prescott beat them without him.

Our postgame episode of The Ocho is available for you right here.