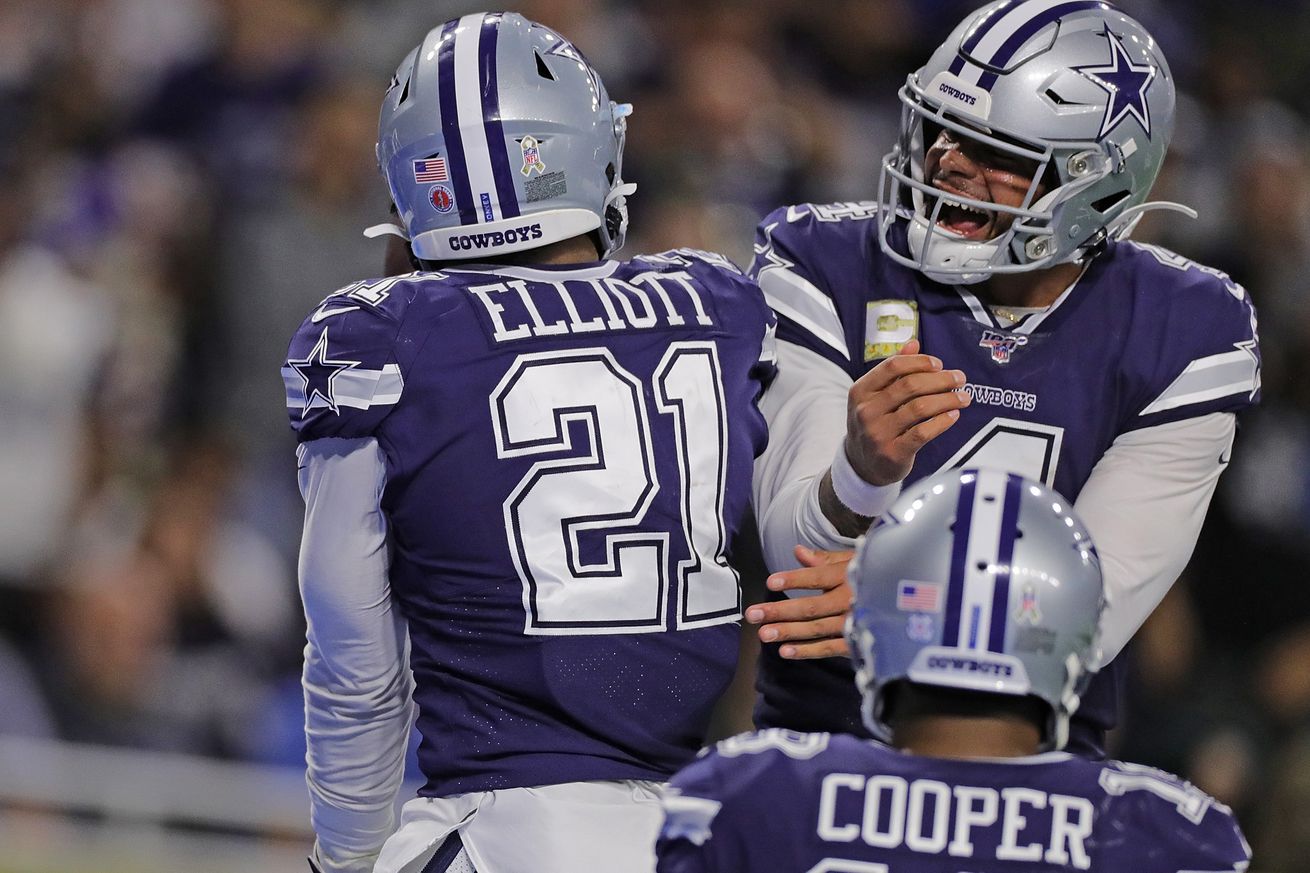 We have thoughts about the Cowboys win, check it out.

The Dallas Cowboys took care of the business in Detroit with a 35-27 win over the Lions. There were some uneasy moments at first, but things got rolling and for the most part it felt like the Cowboys had control of the game. There were plenty of good things to like about this game, with a few not-so-good things as well. Here are ten thoughts on the Cowboys road win over the Lions on Sunday.

The Cowboys just don’t like to start games fast. On the second play of the game, Ezekiel Elliott fumbled the ball giving the Lions possession on the Cowboys 28-yard line. Five plays later, the Lions had a 7-0 lead. Wonderful.

On the Cowboys ensuing possession, they went three-and-out after gaining just one yard. Super.

Even when the Cowboys finally marched down the field and put together a nice 14-play, 74-yard drive, they still couldn’t finish it off and had to settle for a field goal. Dallas just doesn’t like to go up in games early. Instead, they take the scenic route. This worked out okay this time as the Lions aren’t that strong of a team, but this type of approach doesn’t work out so well against good teams.

The Lions got on the scoreboard first thanks to some hard running by former Cowboys running back Bo Scarbrough. The Cowboys selected Scarbrough in the seventh round of the 2018 draft, but he didn’t make final roster cuts. After bouncing around on the practice squad of Jacksonville and Seattle, Scarbrough found himself with the Lions. He was promoted to the active roster on Saturday, and made his NFL debut against Dallas. And on the third carry of his NFL career, boom! He was in the end zone for the score.

It had to feel good for Scarbrough to have a good showing against the team that drafted him. He finished the game with 14 carries for 55 yards, which was good enough to lead all players in rushing for the game.

3. Cowboys special teams is a mess

It’s no secret that the Cowboys special teams hasn’t been good all year; however, they keep finding new ways to make us angry. For whatever reason, the Cowboys just don’t seem to be making the right decisions.

On the opening kickoff, Lions kicker Matt Prater squibbed it that gave Tony Pollard an opportunity to return a short kick, but elected to let it roll in the end zone for a touchback. Then, on his next chance, Pollard opted to try to run it out four yards deep in the end zone, but he hesitated, causing him to get tackled at the Cowboys own 14-yard line. Multiple times in the game, Prater dared the Cowboys to run back kicks, after pooching them short. On one instance, Pollard had no choice as the ball bounced backwards instead of rolling into the end zone. Luckily, the rookie was paying attention or that could’ve been a giant mess.

Things weren’t any better with the punt team as Tavon Austin got caught going backwards a couple times when he was trying to make a play. It’s as if that whole fair catch fiasco has messed with their psyche.

And it’s not just the return game that is out of sorts. The coverage is terrible too. The word on the street must be out that the Cowboys special teams is a mess because the Lions used every opportunity to return kicks against them. Lions returner Jamal Agnew took his chances and he had a couple good runs, including a 32-yard punt return.

For the second straight game, Cowboys receiver Michael Gallup made an incredible play. In the first half alone, he had six catches for 113 yards. The second-year receiver does a great job of getting his body turned around, allowing him to go up and make the catch. It’s the first time in his career that he’s had back-to-back double-digit targets. It also just happens to coincide with the best two-game stretch of passing yards this franchise has ever seen.

Dak Prescott has 841 yards over the last two games. It’s the highest two-game stretch of yards by any quarterback in Cowboy history.

It should be noted that Randall Cobb was pretty darn fantastic too. The veteran receiver finished with 115 yards receiving, putting the Gallup/Cobb combo at 263 yards on the day. That’s a pretty good haul from your no. 2 and 3 receivers.

While the Cowboys didn’t offer much in the running game (75 total yards), it didn’t stop the running backs from making plays. Both Elliott and rookie Tony Pollard had touchdown receptions. Pollard took a touch pass while motioning across the line of scrimmage for 21 yards to give the Cowboys their first touchdown of the game. And Zeke finished by taking a screen pass 17 yards to give the Cowboys their final score of the game. It was huge play in the game as it gave Dallas a two-score lead on a key third-down conversion.

And his celebration was such a Zeke thing to do. Love it!

Credit the Cowboys offensive coordinator Kellen Moore for doing a good job getting those guys involved even though the running game wasn’t working very well. It adds an extra dynamic to the offense and I know I speak for many fans when I say, can we please have some more?

It’s still puzzling why the Cowboys are struggling to run the football, but it was refreshing to seem them turn to the air to get the job done. The Cowboys went a little unconventional at times with some throws on what appeared to be running situations. Play-action on second-and-short? Love it. Constantly throwing when they are expecting you to use some clock? Cool beans. And why make the defense make one final stop when this is a perfectly viable option to close out the game?

Not only did Scarbrough have more rushing yards than Zeke, but the Lion’s backup quarterback Jeff Driskel beat him too as he had 51 yards rushing, including a walk-in touchdown off a run fake.

Driskel caused all kinds of fits for the Cowboys defense. Several times he scrambled out of the pocket and turned it into a positive gain. Not only did Driskel gain extra rushing yards, but he also kept plays alive to convert some big plays in the passing game. The Cowboys defense always seemed a little bit slow at getting after the Lions backup quarterback.

After it looked like the Cowboys had put the game away by going up 14 late in the fourth, the Lions made things interesting when it only took them five plays and two minutes to find the end zone, aided by a nice 23-yard run by Driskel. And the Lions looked like they were going to make a run to tie the game when Driskel rolled to his right and found Kenny Golladay deep.

Kenny Golladay WHAT. A. CATCH. #DALvsDET

The Cowboys leave the motor city with a W, but there’s a lot to clean up. In particular, why are they jumping offsides so much? How many offside penalties did you count? It felt like a lot as the Cowboys repeatedly gave the Lions extra chances with these bonehead plays. The most costly instance of this occurred when Michael Bennett committed a neutral zone infraction on a fourth-and-two as the Lions were lining up to punt. How does this happen?

Luckily for the Cowboys, the Lions went nowhere on that series and it didn’t come back to bite them, but geez – why do we even have to deal with this?

9. It shouldn’t have been this close

I hate to rain on the victory parade, but how was it that this game was as close as it was? The Cowboys had nearly 200 more yards of offense, yet it still came down to one possession. The offense was great. Yes, sluggish at first, but they put up over 500 yards, converted 8/14 on third down, and scored 35 points. That’s always going to earn you high marks.

The defense played well at times as they had a stretch were the Lions went three-and-out on three straight possessions. But then there were other times they looked really bad. Between silly penalties and giving up some chunk plays, it wasn’t a good showing by the defense. They still get gashed up the middle on run plays at times. They still have problems covering screen passes. And this was their second consecutive game where they didn’t force a turnover. The defense looks a little suspect.

Late in the fourth quarter the Cowboys were hit with a run of injuries. First, Demarcus Lawrence went down with a shoulder injury. Apparently, it wasn’t too bad because he returned to the game shortly thereafter. Then, on the next play cornerback Anthony Brown went down with an elbow injury, and safety Xavier Woods was also seen holding his finger. It is unclear the severity of their injuries.

And a little bit later, right tackle La’el Collins went down with an knee injury. That’s a brutal way to close out the game. Hopefully, none of these injuries are serious enough for them to miss extended time. Stay tuned.

What stood out to you from this game?