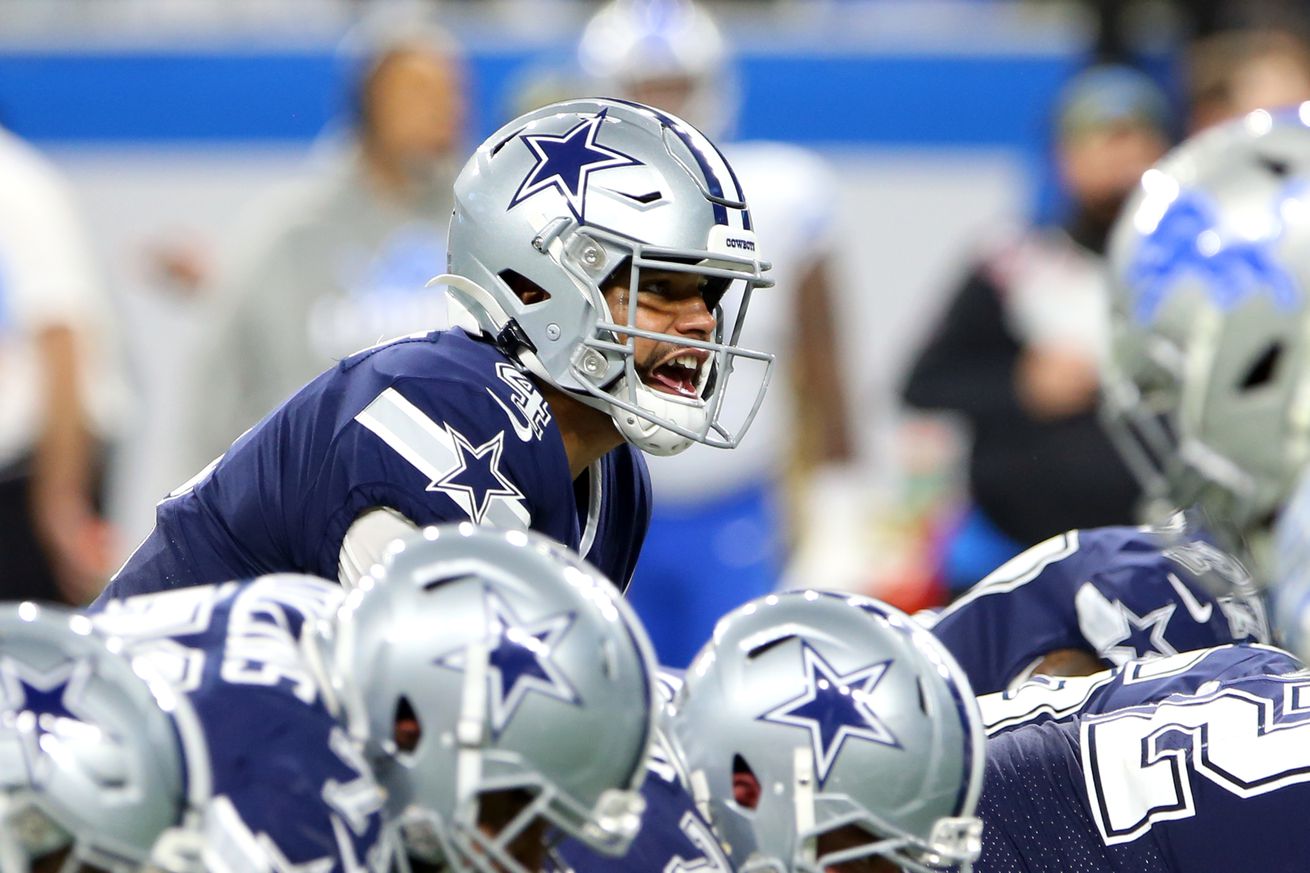 Anthony Brown out for the season.

How Dak’s Success Will Pay Off For Zeke Elliott – Staff, DallasCowboys.com
The media seemed to catch up with what many fans already seemed to know: Dak Prescott’s passing game is driving this version of the Cowboys.

Prescott has been impressive all season long, but these last two performances seem to signal a shift. For years, it has spelled doom when Elliott has either been unavailable or unproductive. But in his fourth season, the Cowboys’ quarterback may have reached a level where he can offset that.

In the wake of that 28-24 loss to Minnesota, there was plenty of talk that the Cowboys didn’t lean enough on that ability. Who can say if they listened to it, but they certainly made the Lions pay for their run-oriented focus.

It’s interesting to think where this twist takes things. Prescott has been a good quarterback for years, but this element of his game is a bit new. He has only surpassed 350 passing yards on six occasions in his career, and four of those have come this season.

Surely, if he keeps torching people, then teams will shift their focus off of Elliott. And if that happens, it presents quite a challenge for opposing defenses.

Cowboys Lose Anthony Brown For The Season 0 Nick Eatman, DallasCowboys.com
The Cowboys have had good fortune with injuries this year but bad news coming out of the Detroit contest as fourth-year cornerback Anthony Brown is headed to injured reserve.

The Cowboys’ cornerback depth took a big hit on Monday when head coach Jason Garrett announced that Anthony Brown is out for the rest of the season.

Brown, who is in the final year of his contract and will be an unrestricted free agent at the end of the season, suffered a triceps injury that will require surgery and likely put him on injured reserve this week.

Brown had battled a hamstring injury earlier this month and missed the Eagles game on Oct. 20. He has played the last three weeks but most of his defensive reps have gone to Jourdan Lewis, who is playing more in the nickel packages.

Defenses are going to continue to force Dak to beat them. It doesn’t always work as we saw last week in Minnesota, although Prescott arguably played the best game of his career despite the loss.

But if that wasn’t it, maybe Sunday in Detroit was his best. He threw deep posts to receivers, deep outs, crossing routes, underneath throws, screens and just about anything else you’d could imagine.

Oh, and he threw the ball in a variety of ways, too. Mostly overhanded, of course, but when the situation called for him to drop the elbow and fire off a side-armed throw like he was a middle reliever, Dak showed he can do that, too.

While everyone stumbles around to make excuses for why the Cowboys lead the league in offensive DVOA for other reasons, the reality is that Prescott is simply playing brilliantly. When you look at NFL Next Gen Stats, Prescott has been the anti-Goff. NGS estimates that Prescott should have completed 61.4% of his passes this season; Prescott is instead at 67.7%, with the 6.3% difference the third-largest in football behind Kirk Cousins and Russell Wilson. Prescott would even be higher if the Cowboys weren’t dropping 4.4% of his passes, the fourth-highest rate in the league. (Cousins is at 3.1% and Wilson at 2.4%.)

Going back to Week 12 of 2018 for his most recent 16-game sample, Prescott leads the league in passing yards (4,968), is second in yards per attempt (8.5), third in passing touchdowns (32), and third in Total QBR (73.1) behind Patrick Mahomes and Wilson. He has been a superstar for the past year, and unless the Cowboys get in his way by insisting on running their offense through Elliott, Prescott is going to win them a division title.

As much as Prescott can be praised, is as much as the running game can be questioned. Two weeks ago, Elliott was lauded for his 139-yard effort against the New York Giants for picking up the tough yards, if not breaking the long runs. But something is not right with the Cowboys’ running game. After rushing for 47 yards on 20 carries last week against Minnesota, Elliott was held to 45 yards on 16 carries by the Lions, who entered the game allowing 126.7 yards on the ground per game. Elliott has now gone 158 carries since his most recent run of more than 20 yards, 27 yards in Week 2 at Washington.

Dak Prescott, quarterback, Dallas. Great day for Dak in Detroit, just when Dallas needed it. His 274 first-half passing yards, a career-best for a first half, staked the Cowboys to a 24-14 lead, and he exited the day as the fourth player in NFL history to exceed 3,000 yards and 20 touchdown passes in each of his first four NFL seasons. For the day, he completed 29 of 46 for 444 yards, three TDs and no picks. (How is that only a 116.6 passer rating? Unjust.) Prescott has thrown for 841 yards in consecutive games, more than Roger Staubach, Troy Aikman or Tony Romo—or, for that matter, any Dallas quarterback ever—has compiled. Pay the man, Jerry.

Dak Prescott is coming into his own, but Ezekiel Elliott may be the Cowboys’ best shot at pulling off an upset vs. the Patriots – David Moore, DallasNews.com
We all know Bill Belichick’s objective will be to take away what an opponent does best. That means they’ll focus on stopping the Cowboys’ potent passing game. Will that give Ezekiel Elliott and the running game an opportunity?

New England’s defense ranks No. 1 in the league. It has allowed only nine touchdowns and come up with 19 interceptions this season. It’s on pace for 59 sacks.

Belichick’s big brain and the Patriots defensive personnel will be the ultimate test for a quarterback coming into his own.

That’s why those suggesting the Cowboys have moved on from Elliott as the central offensive figure will want to wait. The team’s best chance for an upset this week could be a heavy dose of Elliott with some Tony Pollard sprinkled in for good measure.

New England has lost one game this season. Baltimore rushed for more than 200 yards in its 37-20 victory. The Ravens ran the ball 41 times and threw it just 23 times.

This follows the Cowboys formula for success with Elliott until this season. The fact he’s been held to 47 and 45 yards on the ground the last two games feeds the narrative that this offense is now best served when it passes to set up the run.

Caution: don’t be so quick to minimize Elliott’s impact.

Film room: 3 things we learned from Cowboys-Lions, including how Dak Prescott put together another MVP performance – John Owning, DallasNews.com
One of our favorites, Owning does he usual deep dive into Sunday’s events.

It didn’t appear possible at times this season, but the Dallas Cowboys (6-4) finally found a way to get a win on the road against a non-divisional opponent, beating the Lions 35-27 on Sunday in Detroit.

Overcoming a turnover on the second snap of the game, the Cowboys’ offense was dominant, accumulating more than 500 yards and 26 first downs. But the defense was extremely disappointing, giving up four touchdowns to an offense playing its backup QB.

In the first half, special teams woes and an early turnover afforded Detroit a short field on both of its touchdown drives. However, field position was no excuse for the Cowboys defense’s performance in the second half, when Detroit drove the ball 75 yards for each of its second-half touchdowns. The defense was hindered mightily by poor tackling and untimely assignment busts throughout the game.

The Cowboys got the victory but will need a much better performance from their defense if they want to have a chance next week on the road against the Super Bowl champion New England Patriots. Still, Sunday’s win proved to be important as the Philadelphia Eagles’ loss to the Patriots gave the Cowboys a full game lead in the NFC East.

The Starting 11: The NFL’s Pass Interference Challenge Rule Is a Sham – Robert Mays, The Ringer
Did I mention the media at large is noticing Dak Prescott is playing well?

Dak Prescott continued his fantastic season on Sunday by piling up 444 yards and three touchdowns against the Lions, and it’s time to recognize him as a legitimate MVP candidate. At 6-4, the Cowboys haven’t had the team success that the Ravens and Seahawks have this season, but Prescott has been every bit as valuable as Lamar Jackson and Russell Wilson. Dallas entered Week 11 ranked no. 1 in offensive DVOA and no. 3 in passing DVOA. Prescott’s 67.7 completion percentage is actually 6.3 percentage points higher than his expected completion percentage—the third-largest difference in the NFL for QBs with at least 200 attempts. Prescott leads the league with 3,221 passing yards, which is only 664 fewer yards than he’s ever recorded in an entire season. And he’s on pace to finish with 5,153 yards. That would be the seventh-highest single-season total in NFL history.

Counting stats can be misleading, but consider this: Prescott is also averaging 8.8 yards per attempt. If he continues that pace, he would be only the fourth 5,000-yard passer in history to crack 8.5 Y/A in that same season. The three QBs who did it before him are Tom Brady (in 2011), Dan Marino (1984), and Patrick Mahomes (2018). Both Marino and Mahomes were named MVP those years, and Brady lost out only because Aaron Rodgers happened to lead the Packers to a 15-1 record on the strength of the most efficient passing season in NFL history. Prescott is having one of the most productive years the league has ever seen, and it should put him firmly in the MVP hunt.

The Eagles’ Loss to the Patriots Illuminates the Dynasty That Wasn’t – Robert Mays, The Ringer
Remember how the Eagles were going to be a dynasty? Yeah, me either.

There’s also still a very real chance that the Eagles can edge out the Cowboys for the NFC East title. Dallas has only a one-game lead in the division after knocking off the Lions on Sunday, and the Cowboys travel to New England next week to take on the Patriots. Plus, these teams have a pivotal matchup looming in Week 16. At this point, the prospect of facing Dak Prescott and the Dallas offense seems like a much more dangerous postseason proposition than matching up against Philadelphia, but the Cowboys’ Jekyll-and-Hyde ways leave any possibility on the table.

Even if the Eagles do manage to sneak into the playoffs, though, they don’t have the ceiling that many projected before the season—or the one many more envisioned when they topped the Patriots in the Super Bowl. For the second straight year, an Eagles team with lofty expectations looks like it’s going to fall short. And even if there’s still hope for the future, the present—as Pederson put it—is both frustrating and disappointing.

Dak Prescott is your passing leader through Week 11. We talked about it and whether it’s sustainable on the latest episode of The Ocho.