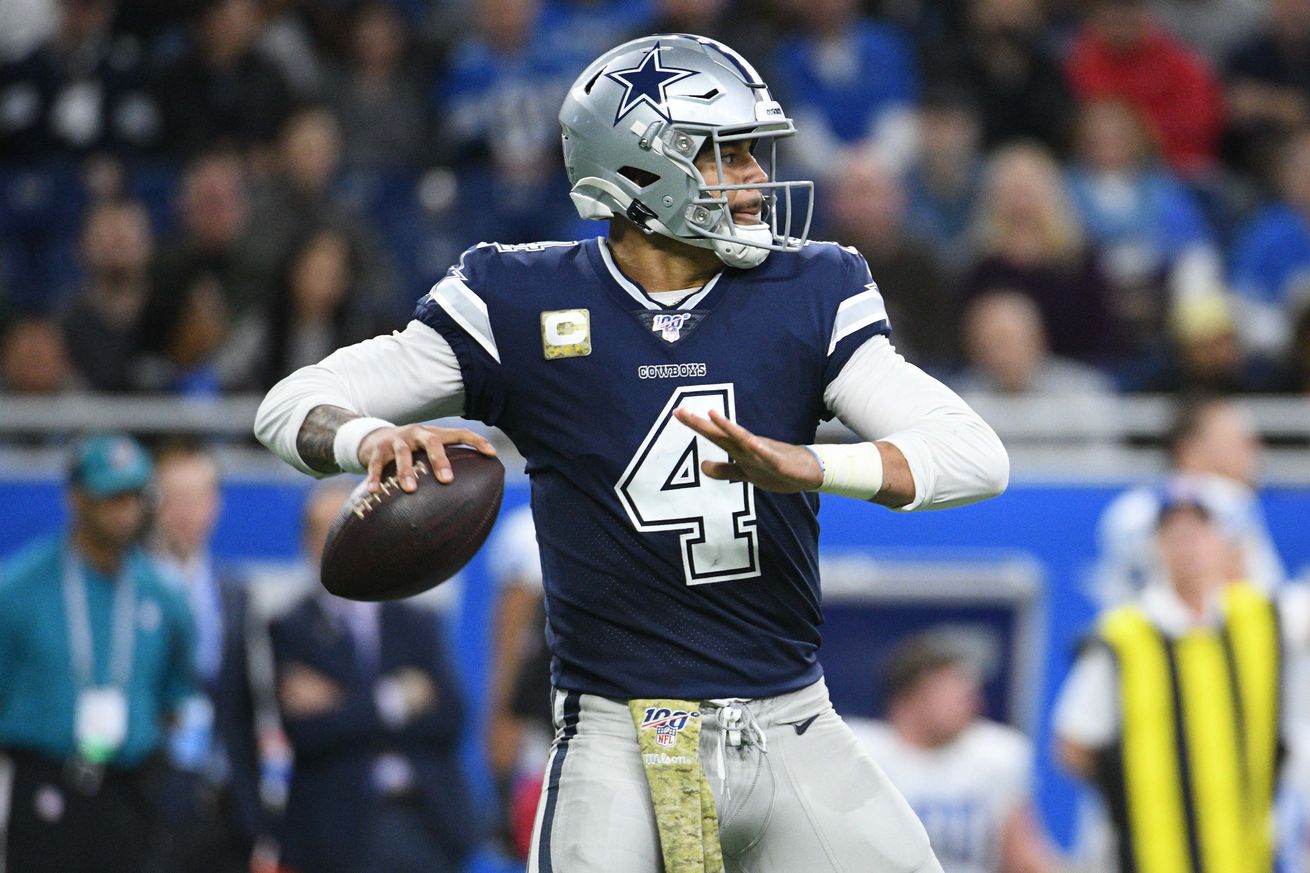 The Cowboys identity has finally changed.

For the last half decade, the bread and butter of the Dallas Cowboys has been the meat and potatoes that they employ up front. The era of Cowboys football behind Tyron Smith, Travis Frederick, and Zack Martin has been a team identified by great run games for the better part of their time under Jason Garrett.

Why wouldn’t you run the ball if you were the Cowboys? With an offensive line that is dominant it’s easy to have success. That’s so much of why the Cowboys have employed the league’s leading rusher in three of the last five seasons.

The NFL has changed, though. It’s been changing for a while. You have to be able to beat teams through the air and that simply hadn’t been the case for the Cowboys. Until now.

Through the Sunday games of Week 11, Dak Prescott was the NFL’s leading passer. That’s no small feat.

Consider that Dak is seemingly making everything that he can out of pass attempts. He turned in his third performance over 400 yards against the Detroit Lions. It’s time to acknowledge that he is the reason for why this offense is as good as it is. From ESPN’s Bill Barnwell:

While everyone stumbles around to make excuses for why the Cowboys lead the league in offensive DVOA for other reasons, the reality is that Prescott is simply playing brilliantly. When you look at NFL Next Gen Stats, Prescott has been the anti-Goff. NGS estimates that Prescott should have completed 61.4% of his passes this season; Prescott is instead at 67.7%, with the 6.3% difference the third-largest in football behind Kirk Cousins and Russell Wilson. Prescott would even be higher if the Cowboys weren’t dropping 4.4% of his passes, the fourth-highest rate in the league. (Cousins is at 3.1% and Wilson at 2.4%.)

You might want to re-read that a few times. Dak is completing more passes than NGS estimates that he should be (someone who’s doing that at a higher rate is the quarterback that Dallas last lost to by the way; Kirk Cousins has also had a great season).

Prescott is having the success that he is in spite of his receivers suffering from so many drops. While the likes of Amari Cooper, Michael Gallup, and Randall Cobb have certainly helped Dak to this point in the season, they’ve also had their fair share of misses.

There are so many takes that began with “Dak is only good because of Zeke” that are taking a huge hit this season. Let’s have a moment of silence for them.

Ezekiel Elliott “only” had 45 yards rushing for the Cowboys in Detroit. That is the fewest amount of yards that he’s ever had in a Cowboys victory. The previous low was the first game of 2019 when he “only” had 53 yards rushing. The point here is that the Cowboys are no longer reliant on elite production from him.

Consider that Dak Prescott has thrown for 841 yards in the last two games combined. That is the most that any quarterback in franchise history has ever thrown for in consecutive games, that’s surely worth saying a few times.

How has Zeke fared in those games, you ask? In the same stretch, Elliott has a combined 92 yards rushing. That is the fewest total for Zeke through any two consecutive games throughout his 50-game career. That’s quite telling.

Obviously the more that the Cowboys are throwing, the less they are running. It’s hard to have a passer eclipse 400 yards while your primary runner also tops 100. There are only so many plays in a given game so sometimes you have to lean on one and the Cowboys are learning that they can lean on their elite passer.

Zeke was a workhorse for the Cowboys for the first 40 games of his career, there’s no denying that. In that stretch of time there were only four games in which he had less than 55 yards rushing. That’s pretty unbelievable when you think about it.

10 games in to the 2019 season… Ezekiel Elliott has failed to hit 55 yards rushing in four different games. Including the last two. Some of that is that he hasn’t been performing to the same degree (he’s still very good, make no mistake), but a lot of it is that he doesn’t have the same opportunities.

Ezekiel Elliott carries through 10 games of a season

Obviously Elliott led the league in rushing in both 2016 and 2018, and it’s worth noting that he only played 10 games in total in 2017. We’ll see what comes of his production over the rest of the season, but it feels safe to say that it’s a lower priority than letting Dak air it out.