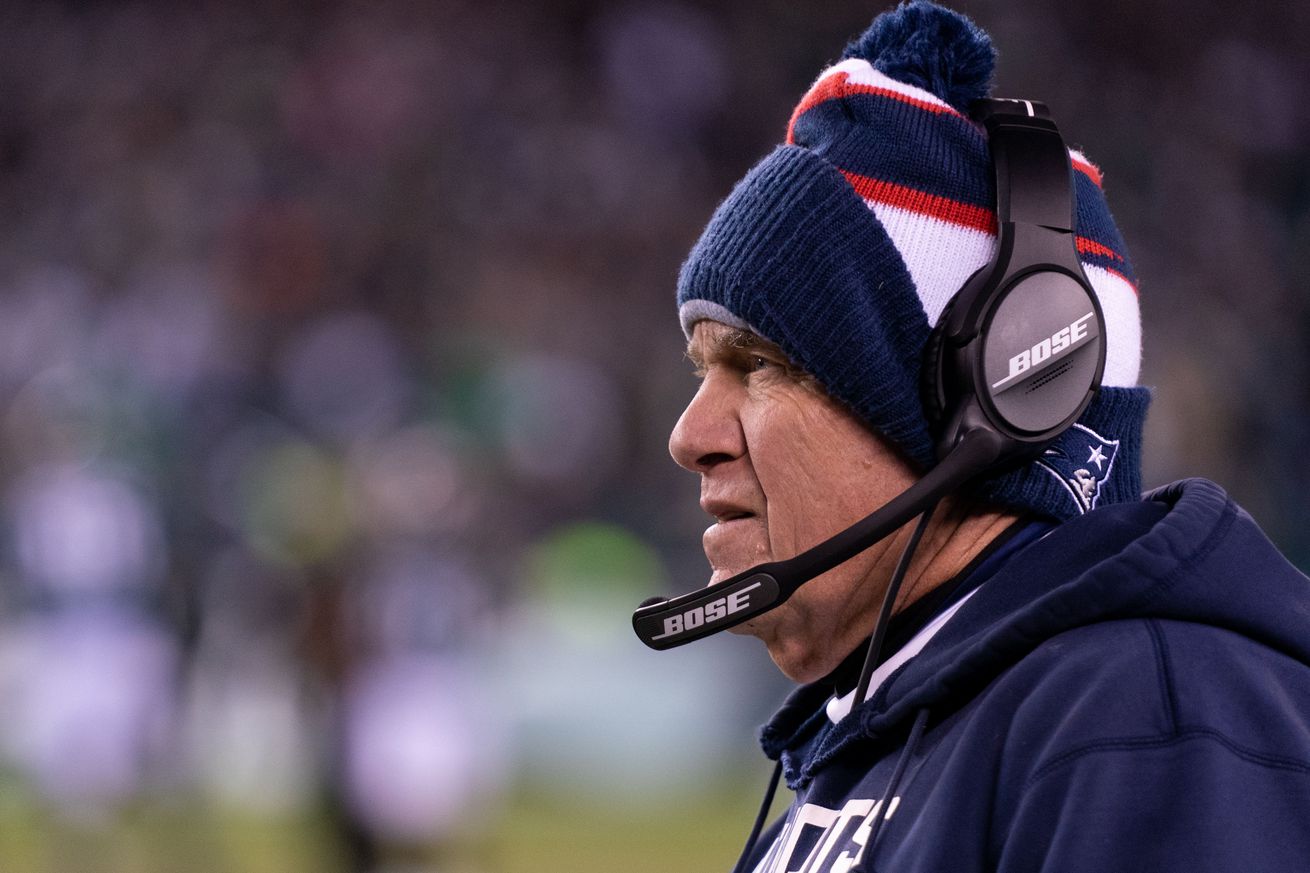 Plus, Dak Prescott hit an impressive milestone on Sunday

Jerry Jones still thinks about how Bill Belichick once lobbied the Cowboys for a job in the ‘90s – Sean Wagner McGough, CBS Sports

The Cowboys draw the New England Patriots this week, led by arguably the greatest head coach in history, Bill Belichick. On Tuesday, Jerry Jones dropped a nugget that Belichick once lobbied for the Cowboys’ top job during the mid 1990’s.

On Tuesday, Jones shared a story from the mid-1990s involving a ski resort, Belichick, and the then-fired Browns coach lobbying Jones for a job. Apparently, Belichick told Jones, “I can coach. If you ever get an opportunity, don’t forget about me.”

It’s something Jones still thinks about, according to The Athletic’s Jon Machota.

”I’ve thought about that many times. You never know where you can find a great coach. You can find them in a ski checkout line sometimes.”

Belichick, of course, did not get hired by the Cowboys after his failed run in Cleveland. Instead, he went on to serve as the Jets’ defensive coordinator for three seasons before becoming their head coach for a split second before bolting for New England, where he has remained since the 2000 season, winning 75 percent of his games and taking the Patriots to nine Super Bowls, of which they’ve won six.

Speaking of Belichick, often revered as one of the NFL’s greatest defensive minds, he had nothing but praise for Cowboys quarterback Dak Prescott when speaking to reporters on a conference call on Tuesday.

“He’s playing behind a good offensive line, he has good receivers, he’s in a good system, the passing game is very well coordinated and organized,” Belichick said Tuesday via conference call with the Dallas-area media. “They hit teams on a lot of plays that are tough against the coverages or the matchups. They find good route combinations and they find good matchups in the passing game and they exploit them with all their players.

“And if you don’t do a good job on the pass rush then Prescott can extend plays or scramble. I wouldn’t say he’s trying to run – he’s a very good passer. But at the same time, if you’re not sound with your pass rush he can easily pick up a first down or make you pay for bad decisions or bad pass rush organization.”

In what shouldn’t be a surprise to anyone, the Patriots are favored to beat the Cowboys on Sunday. However, that hasn’t stopped CBS Sports’ John Breech from picking the Cowboys in an upset prediction. It’s also worth noting he’s correctly predicted all of the Pats’ games this year so far.

As for the Cowboys, they’re one of the few teams in the NFL that can actually attack the Patriots defense the way that the Ravens did; you know, the one team that actually beat the Patriots this year. The Cowboys have the quarterback, the running back and the wide receivers to be able to move the ball on New England, and the scary part for the Patriots is that the Cowboys offense might have more talent than Baltimore’s (the Ravens offense is definitely better coached, but the Cowboys probably have more overall talent).

If the Patriots defense has had one weakness this year, it’s stopping the run, so I’m fully expecting Jason Garrett to copy the Ravens’ game plan, which is smart for two reasons. For one, that means Garrett won’t have to come up with a game plan of his own, which is arguably a good thing for Dallas. And two, the Ravens game plan worked, so why not use something similar.

Guys, I’m 10-0 picking Patriots games this year and I’m putting my perfect record on the line by picking against the Patriots.

To those that have been watching the Cowboys all year long, it’s not surprising to see just how incredible Dak Prescott has been playing. But now, people across the nation are starting to take notice, and advanced analytics have thrust him into the MVP race.

Prescott has taken huge strides in first-year coordinator Kellen Moore’s offense, notching career bests in yards per game (322.1), touchdown percentage (5.8 percent), yards per attempt (8.8), sack percentage (3.2 percent), and adjusted net yards per attempt (8.3). He leads the league with 3,221 passing yards and has thrown 21 touchdowns and nine interceptions. Dak has added another 193 yards and three touchdowns on the ground, to supplement all the damage he’s done through the air. He’s currently on pace to finish the year with an incredible 5,154 passing yards—that would be the seventh-highest total in a single season in league history.

The only real box score knock against Prescott is those nine interceptions, but he deserves some benefit of the doubt there: Two of his picks came on well-placed passes that were dropped by his receivers, and another two came on Hail Mary attempts at the end of fourth quarters.

Advanced stats make Prescott’s season look even better. He’s second in ESPN’s total quarterback rating, and the four passers surrounding him (Russell Wilson, Patrick Mahomes, Lamar Jackson, and Deshaun Watson) have all been in the MVP conversation this season. Prescott also came into Week 11 ranked second in Football Outsiders’ DYAR and DVOA metrics, again surrounded by a bevy of MVP-level passers. He’s third in Next Gen Stats’ completion percentage above expectation (among passers with at least 200 attempts), with a 6.3 percentage-point gap between his actual completion percentage and what he would be expected to tally. And he’s leading the no. 1 offense in the league by DVOA.

Dak Prescott has been playing out of his mind this year and shattering all of his records so far this season. But on Tuesday, Prescott broke a record that put him in the same conversation as Hall of Famer Joe Montana.

The mention of Montana, however, elicited a different story. Prescott and Montana are the only quarterbacks in NFL history with four games of at least 375 yards passing and two touchdown passes through the first 10 games of a season.

”That’s what stats are for, to be able to look back and compare. For me, it’s about let’s go get another win and maybe I can get the fifth one,” Prescott said. “It’s all about moving forward, getting better. It’s humbling any time you’re thrown in with the name Montana. Yeah, I appreciate that.”

Prescott might be the best example of a player winning the bet-on-yourself plan in a contract year. His play should elevate him to NFL Most Valuable Player conversation. Prescott’s case would be helped if the Cowboys (6-4) can continue to win, especially Sunday at the New England Patriots (4:25 p.m. ET, Fox).

The Thanksgiving Classic game that the Cowboys play in every year is a staple of the holiday, but it’s more than just a game. In preparation for the annual game, Cowboys players are doing their part to help out in the community.

“It means a lot to come out here every year and be with the fans and give back to the community,” Elliott added. “It’s very special coming here. These guys are really excited to see us every time we come out the door and get a standing ovation. They’re big fans and they really appreciate us being here.”

This is the 16th year the Cowboys have fed residents at the Salvation Army in Dallas, vice president Charlotte Jones said.

“I think the Salvation Army gives us as much as they give other people in hope and inspiration,” Jones said. “I think for us as an organization, as a team and as players, it’s easy to get caught up in the day to day of what we do and not step back and appreciate all that we’re blessed with and all that we have and all that we actually have the power to do.”

The Cowboys offense is sitting atop the league in yards and offensive DVOA but Ezekiel Elliott’s numbers haven’t been up to fans’ expectations. It’s unclear what exactly his poor numbers stem from, but it’s definitely a concern for some.

Anyone watching the Cowboys’ games can see that the bulky Elliott seems to have lost his burst. He appears to be looking for contact rather than trying to find openings to explode out of. And many seem to think that this is a result of stacked defenses placing extra defenders in the box in an effort to stop the run.

But according to NFL.com’s Next Gen Stats, Elliott has faced less 8+ men in the box situations than any other time in his entire four-year career. In 2019, Zeke has run against eight or more defenders in the box just 18.04 percent of the time. During his rookie season, when Elliott led the league in rushing yardage (1,631 yards), that percentage was up to 28.88.

In 2017, when Elliott was forced to serve a six-game suspension, the number of eight or more defenders in the box jumped to a high of 35.12 percent. Despite playing in just 10 games that year, Zeke averaged an NFL best 98.3 rushing yards per contest. And last season, with Elliott once again leading the league in rushing (1,434 yards), that 8+ man box number was 24.67.

Through 10 games so far this season, Elliott has totaled 833 rushing yards. His per-carry average of 4.3 yards is the second-lowest of his young career. Yet, Elliott has the fifth most carries in the league with 194 rushing attempts, but he’s only ranked eighth in total yards.

Where does Dak Prescott rank in MVP discussions? We discuss on the latest episode of The Ocho.