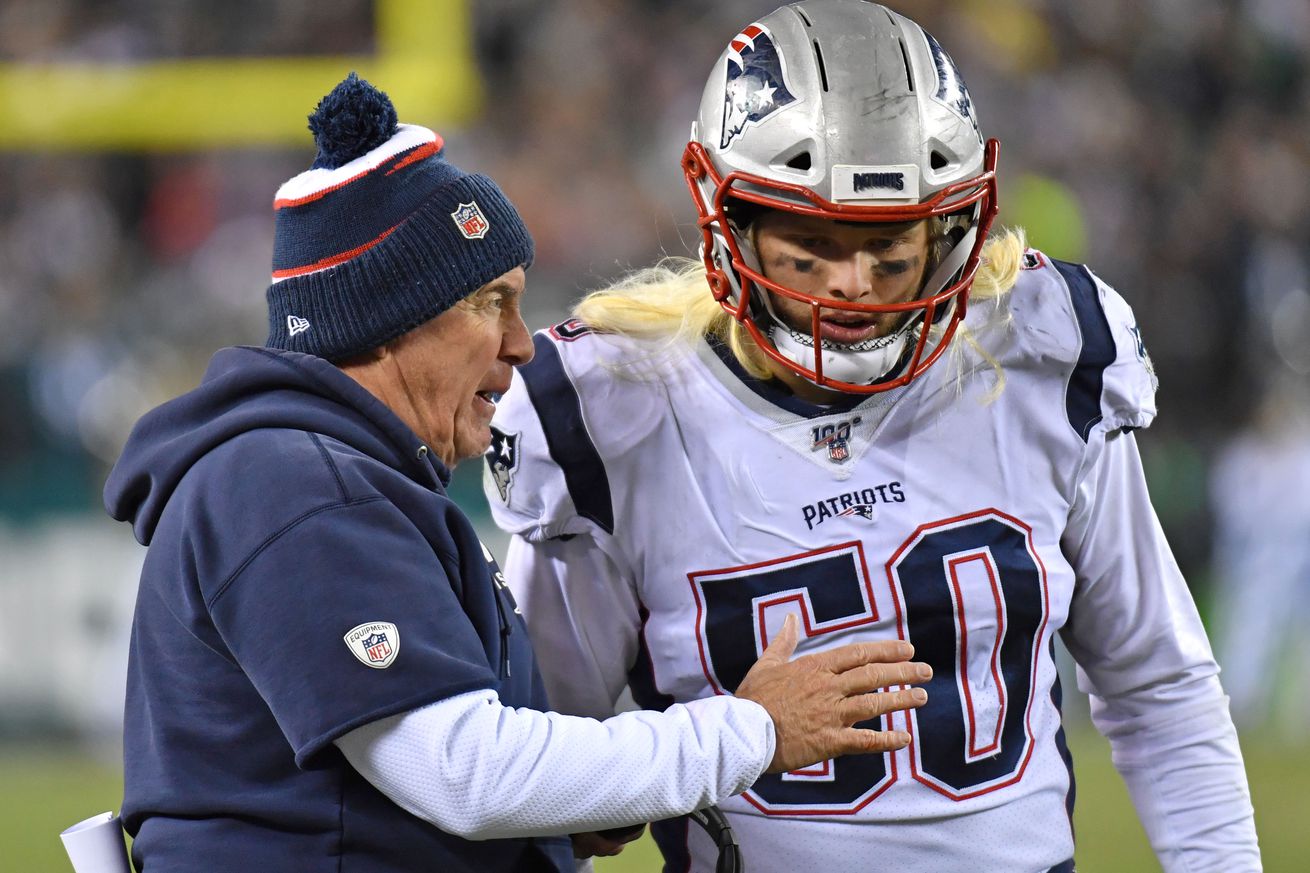 The Cowboys haven’t fared well against great teams this season, the league’s best Patriots are on the schedule this week.

Patriots & Cowboys rich in NFL success, Belichick has major respect for this week’s opponent- Todd Archer & Mike Reiss- ESPN
These two teams rarely play each other but both are rich in NFL success and history. The Cowboys vs. the Patriots is the marquee matchup.

“I have a tremendous amount of respect for the Cowboys organization, the history there, what they’ve created,” Belichick said. “Obviously, they’re probably the premier franchise in all of pro sports. That’s no accident. That didn’t happen overnight. With what Jerry [Jones] and Stephen [Jones] and the rest of the organization have put together there, and the history going back to Coach Landry and Coach Johnson, those are standards that I’d say all of us in the profession aspire to, look up to and aspire to meet the levels of success that they have achieved.”

There are similarities between the runs — from strong head coaches who defined their eras and quarterbacks who played their best on the biggest stages to defenses that wrote their own history and personnel folks who seemed to have all the answers. As the winning continued, the jealousy and contempt for both organizations grew louder than the appreciation of their successes.

Examining what the Cowboys are up against in Bill Belichick’s singular coaching mind –Jon Machota- The Athletic
It’s hard for the Cowboys to prepare for the New England Patriots when they have a cerebral assassin at head coach who changes his scheme to fit his opponents.

Belichick’s New England defense has been historically outstanding this season, holding opponents to 250 yards and 11 points per game. No team has forced more turnovers than the Patriots’ 28, and no team is better on third down, where opponents are only converting 19 percent of the time.

So how exactly has Belichick been able to lose key defenders like defensive end Trey Flowers in free agency and constantly draft at the bottom of every round yet still remain so elite?

Ezekiel Elliott ‘is always a problem,’ Patriots will have their hands full with Dallas Cowboys standout -Mike Mulholland- masslive.com
How will the Patriots defend the Dallas Cowboys? Will they focus on stopping Dak Prescott? If so, another star player might go off.

Dallas will bring the NFL’s top offense to Gillette Stadium. They’re rushing for 131 yards per game, and Elliott, Prescott and Tony Pollard are all threats to gash the Patriots with their legs.

“Their offensive line is really good,” Van Noy said. “Zeke has done a really good job. I think their stats speak for themselves. So we know we’ve gotta bring our best, and I feel like we’re going to do so.”

The Cowboys have been exceptional at hitting home runs this season — they already have 51 plays of 20-plus yards — while New England’s defense has excelled at limiting big gains.

Where the Patriots are very good is using their running backs in the screen game and check down game. James White is ranked fourth in the NFL in receptions for running backs with 48, and is the second leading receiver on the Patriots. So what is the key to slowing down the Patriots offense? Putting pressure on Tom Brady is at the top of the list, but doing so without sending extra defenders is going to be key.

The Cowboys have struggled to stop the screen game so far in 2019 and they’ll face a team on Sunday who will throw the screen to James White, Rex Burkhead, and Sony Michel a ton. The combination of James White and Rex Burkhead will do more damage in the receiving game than Sony Michel, but they don’t mind getting him the football either through the air. When attempting to get pressure on Tom Brady, the Cowboys must not get too aggressive sending blitzers; that’ll be feeding right into the Patriots game plan. While blitzing Tom Brady might not be the best idea, putting pressure on Brady is and it’s something the so called “Hot Boyz” must do.

“When someone has the hot hand, keep giving them the ball,” Elliott said Wednesday from his locker at The Star. “The passing game is rolling right now so you’ve got to ride it and ride it while it’s hot.

Is Dak Prescott worth of the NFL’s MVP? -Michael Salfino & Neil Paine- FiveThirtyEight
The Cowboys may only be 6-4 but don’t you dare blame that on the play of their quarterback, Dak Prescott, who has been outstanding.

Dak’s tale of the tape in 2019 is history making. He’s having the greatest season ever by a Cowboys quarterback by yards per passing attempt — not bad when that history includes Hall of Famers Roger Staubach and Troy Aikman as well as Tony Romo — and 19th best overall since the 1970 AFL-NFL merger. Prescott’s Cowboys lead the NFL in passing play success rate this year and actually trail only one team since ESPN began tracking the statistic in 2006: Tom Brady’s 2007 Patriots, which set passing records in an undefeated regular season. And only one team in the period has topped the Cowboys’ 2019 passing success in defeat: Peyton Manning’s Colts in 2010.

When you’re besting Hall of Famers and on par with arguably the two greatest quarterbacks who ever played, you’re making a statement that, yes, you are your team’s most important player. For now, the major strike against Prescott postseason honors is his team’s win-loss record. How good can he be if his team isn’t dominating? But whatever the reasons for Dallas’s inability to pile up wins, don’t count Prescott among them. The Cowboys’ passing success rate in losses alone would still lead the NFL.

Cowboys QB Dak Prescott downplays MVP chatter: ‘The only thing I care about is wins’ – Michael Gehlken- Sportsday DFW
Dak Prescott is not focused on his statistical performance because his team is 6-4 and staring at at a matchup with the defending champs in New England this Sunday.

Prescott was asked if the potential honor means anything to him.

“No. Not at all. Not at all,” Prescott said. “One, it’s crazy early, right? And two, I mean as I’ve talked about, it’s wins. The only thing I care about is wins. So if that means I’m the winningest quarterback in the league, sure, I’ll want it. But until it means that, I don’t care. It’s something cool, right? But I want to win games, and that’s the most important thing to me.”

Prescott has thrown for 3,221 yards, 21 touchdowns and nine interceptions.

In Sunday’s win over the Detroit Lions, Prescott joined Pro Football Hall of Fame quarterback Joe Montana as the only players in NFL history with four games of at least 375 passing yards and two touchdowns passes in the first 10 games of a season.

“Numbers are numbers,” Prescott said. “I’ve never been a stat guy. I’ve never been somebody who cares about them at all. I care about one stat, and that’s wins. For me, it’s about focusing on that. Sure, all of that stuff is cool. Don’t get me wrong. It’s cool. It’s cool to look up and see that many yards and see this and see that. But I just want to help this team win and give us the best opportunity each and every week, week in and week out. And if it means throwing for that amount, I’ll do it.”

Amari Cooper Confident In Cowboys’ WR Depth vs. Patriots’ top defense – David Helman- DallasCowboys.com
This one is bound to be good as the NFL’s most efficient offense in the Cowboys take on the NFL’s stiffest defense, the Patriots.

As far as Cooper is concerned, it’ll be interesting to see how that personnel handles the matchup. The Patriots’ secondary has been outstanding, anchored by strong play from Stephon Gilmore and Jason McCourty, and nabbing 19 interceptions on the year.

Going back to that famed Mystique, they’re also famous for neutralizing an opponent’s biggest threat in any given matchup.

“They seem to be like a game-specific type of defensive type of team,” Cooper said. “Based off what we do on offense, they’ll adjust their defense. They’ll probably run a coverage that they haven’t run all season if they think it will be able to stop some the things we do.”

Cowboys catch another injury break as Patriots set to deal without WR Mohamed Sanu for several weeks- Patrik Walker-CBSSports.com
Patriots Mohamed Sanu expected to miss battle with Cowboys, could be sidelined ‘a few weeks’. Will Cowboys be able to take advantage of his absence?

The New England Patriots are looking to stave off an upset in Foxborough when the Dallas Cowboys visit in Week 12, and there’s a good chance that just became a bit more difficult — thanks to the injury bug. The team was forced to begin practice this week without wide receiver Mohamed Sanu on the field, who suffered what’s being described as a high ankle sprain on a punt return in their Week 11 win over the Philadelphia Eagles.

As is usually the case with such an injury — also taking into account varying levels of severity/grade — the challenge to return to the field one week later becomes a steep challenge. Sanu is no different in this regard and, to that point, it’s reportedly likely he’ll not only miss the coming battle on Sunday with the Cowboys, per Tom E. Curran of NBC Sports Boston, but he could miss several weeks with the ankle sprain.

The Patriots are favored by six and a half on Sunday. Should you take that? The Rich Eisen Show’s Chris Brockman joins The Ocho to discuss all of that and more.