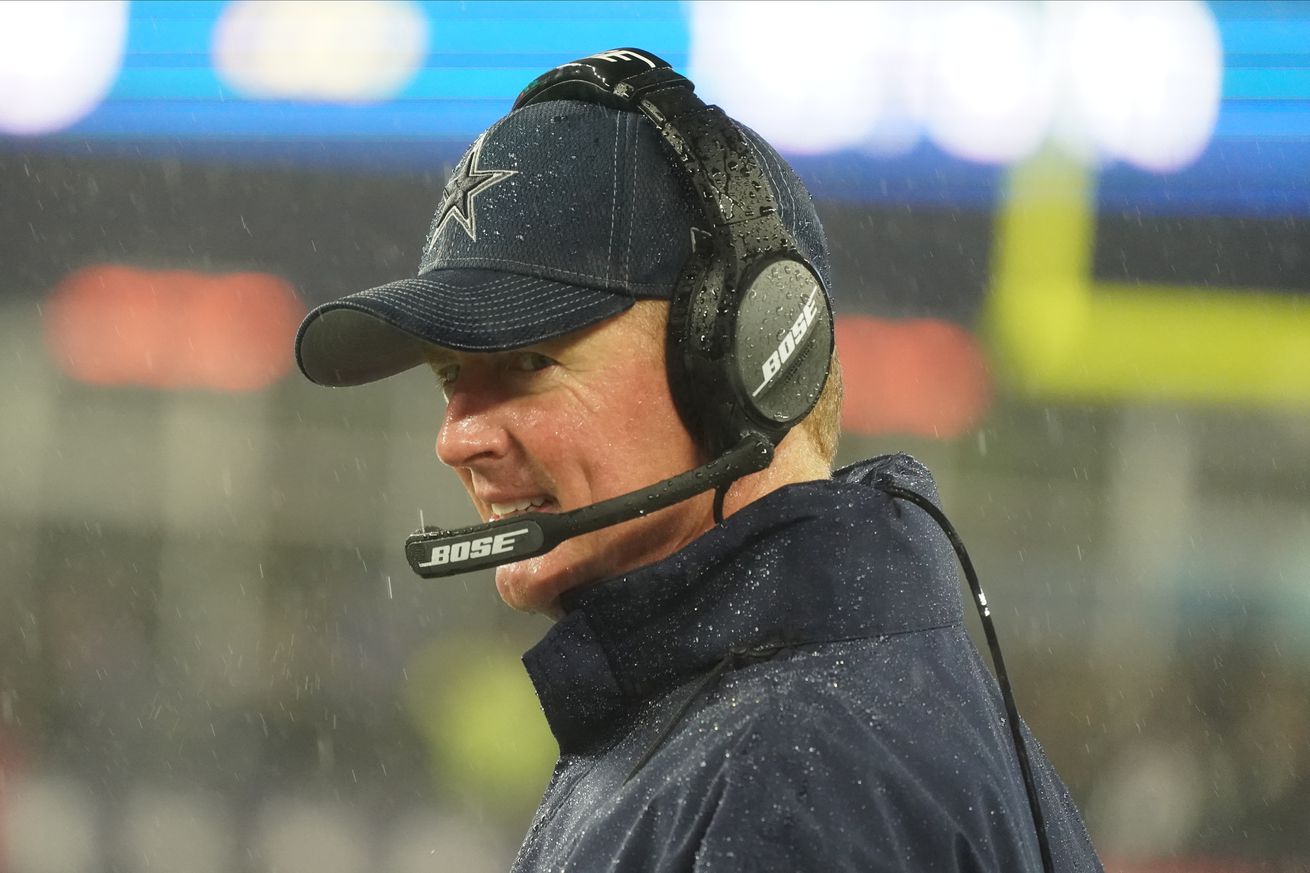 A make or break year for Jason Garrett may be broken.

It wasn’t so much that the Dallas Cowboys lost the game to the New England Patriots. Whenever you go up against Bill Belichick and Tom Brady, in their house, coming away with a victory is a very tall order. Add in the miserable weather and a couple of very puzzling penalty calls that killed Dallas drives, and a loss, especially by just four points, is hardly surprising.

It was the way they lost. Another slow start. Abhorrent special teams play. Those were the biggest issues, and it is more and more clear that the blame has to fall on the coaching staff. Even Jerry Jones vented his frustrations and pointed fingers after the game.

There is still a very real chance that the Cowboys can still win the NFC East and get into the playoffs, because they still cling to a one-game lead over the Philadelphia Eagles. They could still lose that lead, but right now, the Eagles are hardly playing like they are capable of catching them.

Even if Dallas does make the playoffs, all signs point to it being a short visit. Nothing about the way the team has played against any of the opponents that currently have a winning record inspires the least bit of faith that they can go far. A one and done seems the most likely outcome.

It is a case of the team having some really good pieces that just are not being fitted together well. That assembly is clearly the job of the coaching staff. So far, they seem to have lost the plans, or drawn up some horrible designs in the first place.

As mentioned, the biggest issue remains the special teams, which have repeatedly been terrible this season. It is amazing that the same mistakes keep happening. The Cowboys have hardly had a decent kickoff or punt return all season, and against the Patriots could not come close to figuring out how to handle the short kicks against the wind. It is unacceptable to have one of the bobbles and near turnovers we saw. To have them on every kick that was not a touchback is mind boggling in the level of incompetence. Yes, part of that falls on the players like Tony Pollard, but it is not hard to see a true lack of preparation for what happened. Had the wind not carried a couple of punts into the end zone, the Cowboys could have had similar troubles there.

They only had one kickoff returned against them, and no punts, but that one return was for 20 yards. It is hard to not see that New England was much better prepared to face the weather.

All season, I have been harping on how the failures of the special teams have led to a negative differential in starting position for the Cowboys. Against the Patriots, it was one of the worst of the year. While Dallas’ average starting position for their possessions was their own 21, a typical result, New England averaged starting on their 41. That is 20 yards per drive of “hidden yardage” they gained. Over the course of the game, that added up to a 240 yards advantage. Now, that figure was clearly aided by the blocked punt, the interception, and turning it over on downs on the last gasp by the Cowboys. Still, this theme has been nearly constant, with only the turnover-plagued performance by the Eagles giving Dallas a positive edge. All the rest of the games have gone the other way or basically been even.

The obvious target here is special teams coordinator Keith O’Quinn. It is somewhat amazing that he still holds his job given how persistent and pervasive these issues are. The fact he still has his position falls on head coach Jason Garrett. And Garrett is probably more involved in game-time decisions concerning special teams than the other phases of the game.

So this game just adds more volume to the clamor for Garrett to be gone after this year. There’s really no defense. Along with the atrocity that is the kicking and return game, that prevalence of early game errors and the slow starts also points directly at him. This team just looks unprepared and has to get itself together every game, even most of the wins.

It is too late to do anything about the head coach, and it would be hard to justify because of that lead in the division, anyway. What is equally hard is coming up with any real reason to offer Garrett a new contract after this year. Jones’ decision to not extend Garrett and allow him to play out the final year of his current deal seems prescient. No firing will be necessary after the season grinds to a halt for the Cowboys. Just a simple announcement that the team is heading in a new direction.

A new head coach will usually mean a general housecleaning of the staff, but there are at least two current assistants that might be considered for retention, if a new head coach was to buy in to the idea. They are Kellen Moore and Jon Kitna, who have done so much with Dak Prescott and the offense. Yes, things did not go so well against New England, but in that aspect, the weather has to be considered. The Patriots were opportunistic, but generally not efficient. If the Cowboys had avoided that blocked punt and interception, the Pats would have had to mount much better drives than they did. Tom Brady seemed to have just as many off target throws as Prescott did. New England only converted one more third down than Dallas. I don’t think much of the blame for this one can be laid at Moore’s feet, and Kitna of course is more involved with getting Prescott to play well in general than any game specific responsibility. With the weather, it is at the least an unproven assertion that he had any blame in the loss.

Otherwise, it may just be time for the broom to sweep. The defense also did not have a bad night, given the circumstances. Still, you can hardly expect a new head coach to walk into a situation where he is expected to keep both the old OC and DC. And as much as Moore has been a breath of fresh air at times, even his job may fall victim to what increasingly looks like an inevitable decision.

Garrett had a chance to really make a case to remain in Dallas. He failed to make it in the slightest.