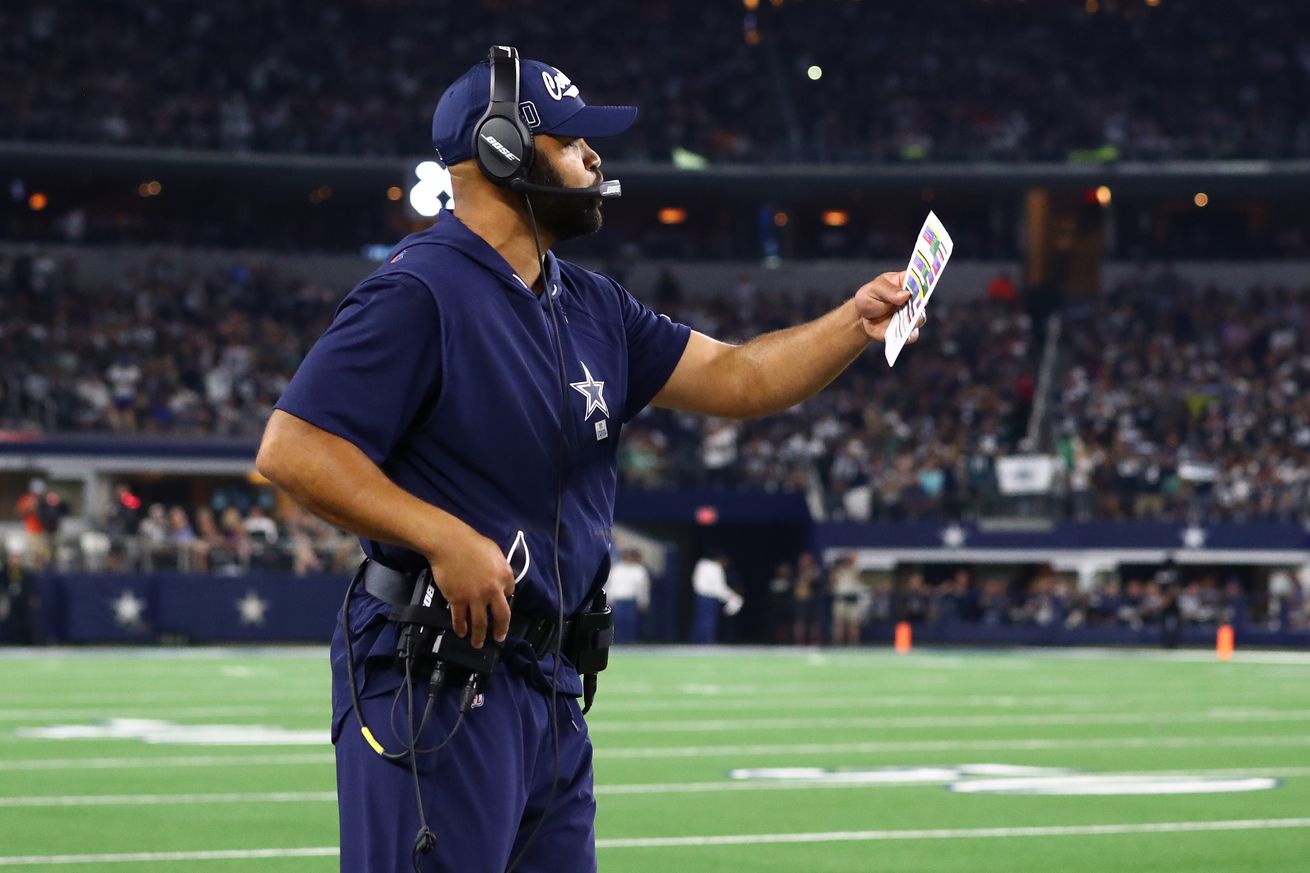 More on the struggling Dallas defense.

For a Cowboys defense that has gone four games without a turnover, December needs to be the season of takeaways – Calvin Watkins, Dallas Morning News

If the Cowboys want to turn things around and make the postseason, they need someone on defense to start generating turnovers.

If there’s one play that symbolized why this team doesn’t create turnovers it occurred last week against the Bills. Faced with a fourth-and-1, Bills quarterback Josh Allen fumbled the snap. The ball lay near defensive tackle Christian Covington. Nobody from the Cowboys’ side moved. Allen moved, however, snagging the ball from the bodies that lay around it and leaped over the pile for a 3-yard gain. As Allen stretched for the first down, Jones tried to swipe the ball, but it was too late.

“Trust me, if I had that ball in my possession, he wouldn’t have gotten it. I didn’t know where that ball was,” Covington said. “I saw the ball fumble out of the corner of my eye. I had no idea to where it went, to this day, no idea where it was.”

Slot cornerback Jourdan Lewis blames himself because he was just standing there watching the play unfold. “I wasn’t hustling and making assumptions on the play,” he said. The Cowboys believe turnovers are an important part of the game, but they are not occurring for them as they are for other teams.

“It’s crazy and you look around the league and there are teams that are getting turnovers,” Awuzie said. “You look at the plays, and it seems destined or something. The ball is just thrown right to a guy, ball spews out and it’s just like that. When the ball is exposed, we got to punch it out, ripping at it every chance we get. When the ball is in the air, we got someone playing the man, but someone has to be playing the ball.”

The last Cowboys player to record a turnover is Lewis, who picked up a fumble against the Giants and went 63 yards for a touchdown in Week 9. “It flew by, honestly,” he said. “You just keep going and honestly you can’t think about the last turnover, that’s what it is.”

Film room: 3 keys for the Cowboys to beat the Bears, including the challenge of limiting Khalil Mack-John Owning, Dallas Morning News

Three keys for the Cowboys matchup with the Chicago Bears.

Moreover, Mack is one of the only edge defenders in the league who can challenge DeMarcus Lawrence in terms of quality as a run defender. He’s outstanding both as a play-side run defender and backside pursuit defender, ranking fifth among edge defenders in total run stops (21; definition for run stop here) and 13th in run stop percentage (8.6%; Lawrence ranks second at 10.8%).

Luckily for the Cowboys, they are better equipped to handle Mack than just about any other team in the NFL with one of the league’s best tackle duos. While there are minor changes depending on the matchup, Mack spends an almost equal amount of time rushing off both edges, meaning Tyron Smith and La’el Collins will have their fair share of battles with him.

Smith and Collins are two of the best tackles in pass protection, allowing just two sacks and eight QB hits between them this year.

How does every position group grade three quarters of the way through 2019?

The Cowboys receiving group has been much improved from a season ago thanks in large part to the contributions of rising sophomore Michael Gallup, free agent chain mover Randall Cobb, and the elite efforts of Amari Cooper. Gallup is enjoying his best year statistically and has shown growth in his second year. With four games remaining, Gallup has the opportunity to have over 1,000 yards. He would need to average a little over 50 yards per game. He has also already set personal bests in receptions (49) and touchdowns (3).

Cobb has been very productive from the slot for the Cowboys. He won’t get near his career best numbers that he posted in 2014 with Green Bay, but he isn’t being asked to be the number two man or go to when they need a big play. He is, however, taking a lot of pressure off of Cooper and Gallup, this allows Prescott to have options when they need to convert on third down. What can you say about Cooper that hasn’t already? His presence has transformed the offense into a more modern approach. Cooper is one of the best pure route runners in the game, and he has been what the Cowboys have needed in a first-option receiver in the Dak Prescott era.

Statistically, this could very well end up being Cooper’s best year as a pro in a contract year. He has matched a career-high in touchdowns and has the opportunity for more. He currently sits 182 yards away from his career high in yards. An additional 29 yards at any point over the next four weeks will give Cooper 1,000 yards for the fourth time in his five seasons as a pro. Ultimately, the Cowboys are getting production from all three in a year where the running game just hasn’t been there. The only knock on this group that is holding them back has been dropped passes.

Will the Chicago Bears follow the Buffalo Bills and be another mismatch for the Dallas Cowboys?

Chicago has the 7th-ranked defense in the NFL right now, just a few slows below the Bills in 3rd place. The Bears rely on keeping the score low and hoping that their offense does just enough to win; they’re not going to succeed in a shootout.

It is their limitation at quarterback with Mitch Trubisky where Chicago may have a glaring weakness compared to Buffalo. While Josh Allen is an improving young talent with dual-threat ability as a runner, Trubisky is a low-producing passer who many Bears fans would love to replace.

But no matter what Trubisky or the Bears do on Thursday Night Football, this game will likely come down to the Dallas Cowboys. Will Dallas continue its 2019 trends of slow starts, costly turnovers, missed field goals, and all the other self-inflicted wounds that have caused our current woes?

What will be the defining matchup of Thursday’s game?

Cordarrelle Patterson. If there has been a consistent theme to the Cowboys of late, it would be the struggles on special teams. It doesn’t get easier this week with the Bears’ Cordarrelle Patterson. He is one of the most dynamic returners in NFL history and leads the league in kickoff return yards with 711. Patterson is also not afraid to take the ball out of the end zone, scoring on a 102-yard return in October against the Saints. It was his seventh career kickoff return for a touchdown, the third-most in NFL history behind Joshua Cribbs and Leon Washington (8). We’ve seen the Cowboys have issues with nearly every unit on special teams and this week, they have to be ready to cover every kick because Patterson will be bringing it out every time.

Spagnola: Bearing Down On Keys To Success -Mickey Spagnola, dallascowboys.com

To even be taken seriously as playoff team, the Cowboys’ defense needs to start playing much better.

And now to what must be considered the biggest of problems lately, uh, where is the defense? In the past four games, losing three of them, the Cowboys have given up 28 points, 27, 13 in the miserable weather conditions at New England and 26. That’s 94 of their 236 points this season in just four games, or 40 percent. In the three games other than the 13-9 loss to New England, that’s giving up an average of 27 points a game.

That won’t cut it, and will minimize whatever other categories the Cowboys might improve on against the, and let’s face it, equally 6-6 and offensively-challenged Bears Thursday night. Now I get it, if you include a nickel defender, the Cowboys very likely will be down four defensive starters against the Bears: Leighton Vender Esch, Jeff Heath, Antwaun Woods and Anthony Brown. That hurts, as does the season-ending loss of versatile defensive lineman Tyrone Crawford, a great veteran voice on the field and in the locker room.

But you don’t have to be an expert to recognize this Cowboys defense, other than three games – at New Orleans (12 points), Eagles (10 points) and Patriots (13 points, though seven thanks to a blocked punt recovered at the Cowboys’ 12-yard line) – just hasn’t played up to expectations in four of the six losses.

It’s gameday. We’re getting ready for Chicago on the latest episode of The Ocho.

Here is where Dallas Cowboys fans stand entering Week 14, and who all football fans think will win the NFC East.