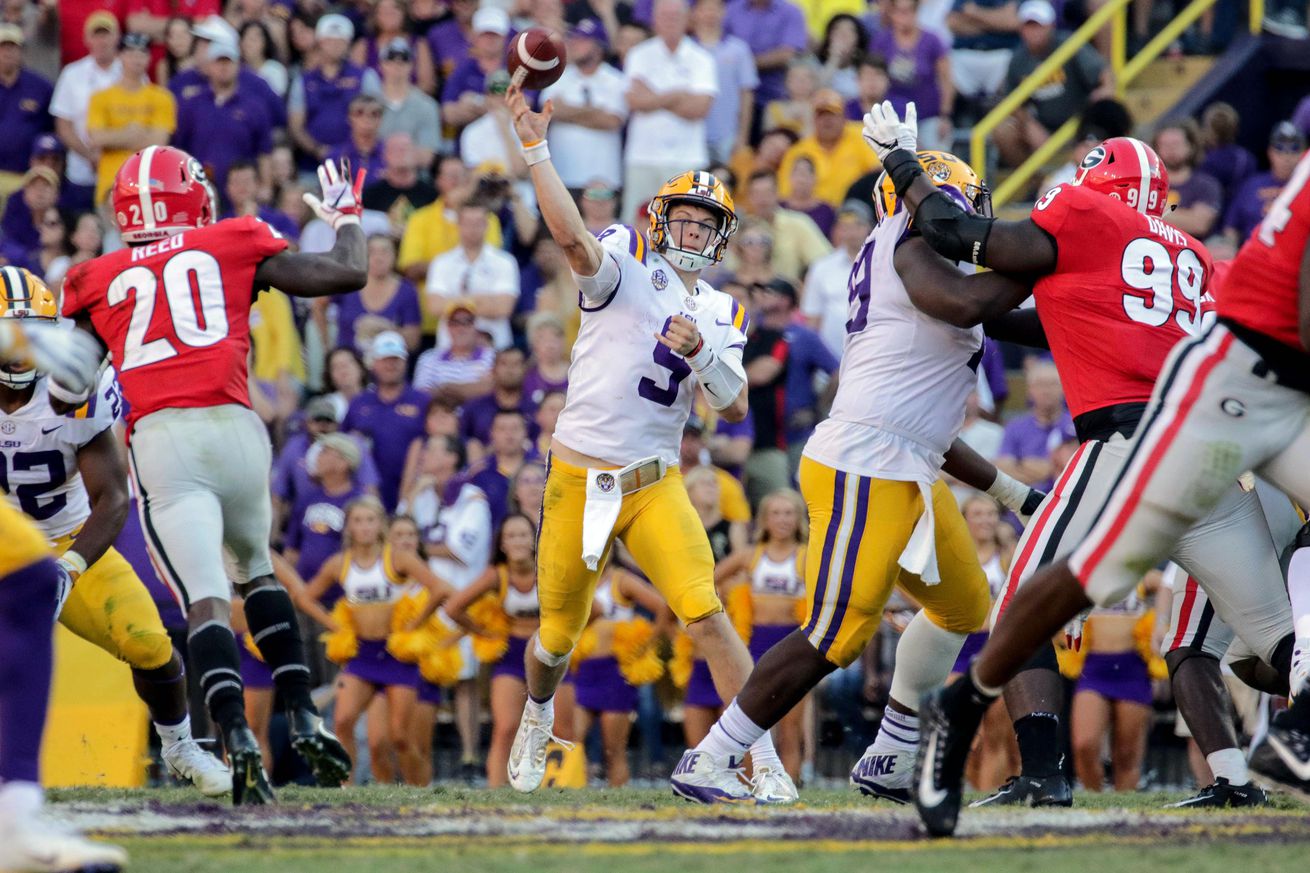 Here is what to expect this weekend in college football.

This is an open thread for college game chat.

Several weeks ago, Baylor was off to a hot start in their showdown with the Sooners before Jalen Hurts rallied the troops and stole one in Waco. Both are one-loss teams with slim playoff hopes riding on this one. Oklahoma comes in with one of the nation’s best offenses but Baylor has one of the country’s finest defenses. Can the Bears avenge their loss and win the rematch?

“With that, I think this rematch could come down to coaching adjustments more than other factors. Will Matt Rhule and Phil Snow come up with a strategy for containing Jalen Hurts in the running game? Will Lincoln Riley find a way to get the pass game going more consistently, especially with the reintroduction of receiver CeeDee Lamb? Without access to practice it’s hard to say what adjustments are being made by each team and if they’ll be successful. But, Baylor does have the Big 12 Coach of the Year on their side, so that seems like a decent omen.

Another key to the last meeting between these teams was Oklahoma’s defense shutting down Baylor’s offense in the second half. Luckily, Baylor has come out firing with more passion offensively the last couple games, thoroughly controlling Texas then blowing Kansas out in Lawrence. Granted, Oklahoma has a stronger defense than both those teams but I think the effort being shown by Charlie Brewer and company goes a long way. The spread is 9 points in favor of OU, but at the end of the day, it is really hard to beat a team twice in a single year. It’s even harder when that team is a top 10 talent with an elite defense. Oklahoma barely got it done round one, Baylor finishes the job and secures a Big 12 Championship in round two, even getting a bit of separation.”

Prediction: I got a feeling that Baylor gets the better of the Sooners here for a BIG-12 title and statement win.

#4 Georgia vs. #2 LSU – Can the Tigers win their first SEC title in eight years or will the Bulldogs hang on to their playoff hopes? 4 ET CBS

There is much more than the SEC title on the line in this game for both teams. LSU can put the exclamation point on an undefeated season and their first title win since 2011. A win for LSU will help their argument for the #1 spot in the rankings. On the other side, the Bulldogs are fighting for their playoff lives and a second SEC title in three years. This game has all the stakes and all the drama, just what you want from a football game.

Oddly enough, even with disparate narratives about the two units, LSU and Georgia aren’t as far apart as you might think, defensively. In conference games, the Bulldogs’ defensive success ratehas been less than a percentage point better than LSU’s (63.6 compared to 62.7), and just two points better on third-down (28 percent compared to 30.6).

The difference has been big plays; Georgia allows a 15-plus-yard run or 20-plus-yard pass on just 7.4 percent of their plays, compared to 12.5 for the Tigers. Just 37 total explosive plays allowed to SEC teams, versus 70 for LSU. But it’s cut both ways; the Tigers have forced 39 three-and-outs and 18 turnovers compared to 34 and 13 for UGA and 109 total havoc plays (sacks, tackles for loss, turnovers or pass break-ups) versus 87 for the Dawgs.

Georgia hasn’t been quite as aggressive, but they’ve been able to hold opponents down to the tune of just 21 total red-zone appearances. LSU has been more aggressive, but more vulnerable.

Prediction: It’s been a long road back through many speed bumps along the way but Joe “Burreaux” gets it done for the Tigers. LSU wins by six.

Clemson are the defending national champions but your wouldn’t think that by listening to mainstream media. For some reason, Dabo Swinney and his crew don’t get the love they deserve. Clemson is fourth in the nation on offense, scoring 45+ per game, they also have the very best defense, allowing 10 points per game. They don’t always play the most impressive schedule and that’s what hurts them most. As Clemson goes for their fifth conference title, they can’t overlook a Virginia team that has won four straight to get here. The Clemson defense must key in on Virginia’s QB Bryce Perkins, he’s the heart and soul for Virginia.

None of that matters if we lose on Saturday. It’s unlikely (SP+ gives Clemson almost a 90% shot of winning) but it could happen. If it does, it’s going to be because Bryce Perkins played his ass off. You could make a statistical case Perkins was as good of a college QB as Kyler Murray last year. The senior has accounted for over 80% of Virginia’s yardage this year, and that number is even higher against the best teams the Cavaliers played. Bud Foster was comparing him to Donovan McNabb last week. If not for sacks Perkins would be closing in on a 3,000 yard passing/1,000 yard rushing season. Virginia is going to go as far as he takes them. Last week the RB’s got just six carries, with Perkins getting three times as many. The Cavaliers don’t have a great offense (57th in SP+) but managed to take down the Hokies with a combination of big plays and turnovers. With a little luck, Perkins might just be good enough to pull this off.

Prediction: Virginia will put up the effort but they just don’t have enough offensive balance, Clemson pulls away by two scores late.

#1 Ohio State vs. #8 Wisconsin – The Buckeyes already handled these Badgers once, will it be a repeat blowout win for the top-ranked Ohio State? 8 ET FOX

The last time these two teams met, Ohio State thumped Wisconsin 38-7 and you can bet the Badgers still feel that loss. These Badgers have two losses on the year but they have a contending defense that can keep them in games when they want to. The inconsistency has been the major issue for Wisconsin. Will they be able to execute a winnable formula against the top-ranked Buckeyes? Nothing worked for the Badgers the last time they met.

The Ohio State Buckeyes were clearly the better team in the first go-round of this matchup, winning 38-7 in Columbus. Now on a neutral site in Indianapolis, these two teams meet again with a chance to claim the Big Ten title. The Wisconsin Badgers have improved dramatically on offense since late October, while Ohio State has continued to hum right along. A lot is on the line in this game, and it will play a pivotal role in bowl representation for the conference. Jonathan Taylor was only able to muster 52 yards rushing in the first meeting, while Chase Young had a monster game with four sacks. Wisconsin will need to shift both of those statistics in a major way to have a chance to upset the Buckeyes in round two.

Prediction: Though Wisconsin has improved, they are just not talented enough to pull this off. Buckeyes by 14.