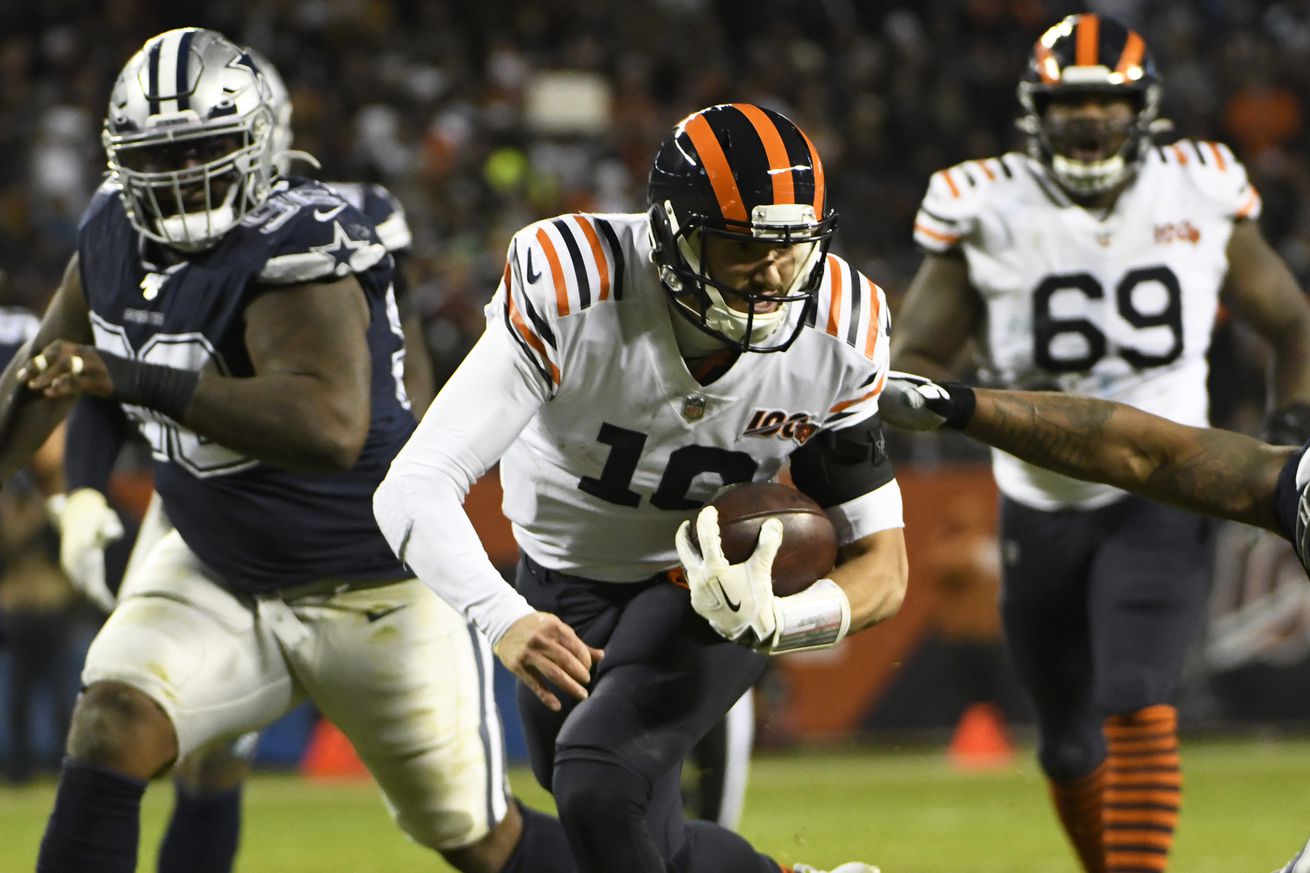 The final score didn’t reflect how badly the Cowboys were beat.

Once again, the Cowboys went into a game they were favored to win and got completely outclassed in every facet of the game. After going up 7-0 and forcing a turnover, the Cowboys gave up 24 straight points to effectively lose the game with over eight minutes left in the third quarter. Some garbage time points helped conceal how bad the game was, but the reality is that the Cowboys had lost before the fourth quarter even began. That said, here are the five non-scoring plays that made it so.

Here’s that aforementioned turnover. After the Cowboys scored a touchdown on their opening drive, the Bears were getting ready to do the same, with the Dallas defense doing their best to make Mitch Trubisky look like Lamar Jackson. Getting down to the Dallas 16, Trubisky took a shot to the endzone.

Incredible catch and major takeaway for the #DallasCowboys pic.twitter.com/prVVpSvU55

Initially ruled an incomplete pass, Jason Garrett challenged the call and it was reversed, as Lewis made an insane play on the ball and did his best Amari Cooper impression to drag his feet on the sideline. It was an early shift in momentum that gave Dallas the chance to make it a two-score game early on.

Yeah, about that. The Cowboys took over on their own one-yard line after the crazy pick, and two plays later faced a third and five at their own six. Kellen Moore drew up a pretty routine quick out for Michael Gallup to the sticks, but it nearly ended in calamity.

The throw was a tad bit late and Kyle Fuller made a great break on the ball, nearly picking it off. It fell incomplete, but nevertheless meant the Cowboys went three and out, essentially wasting the pick from Lewis and a chance to get a big lead early on the road. After punting the ball, Chicago only needed six plays to score a game-tying touchdown, and Dallas would never lead again.

Jamize Olawale forgets to look for the ball on third down

After the Bears had gone up 10-7, the Cowboys offense was starting to get their mojo back, as Dak found Coop for a big gain and Ezekiel Elliott broke off a big run of his own. But a third and four at the Chicago 24 came up, and the Cowboys ran this play:

Based on Prescott’s actions, it seems like fullback Jamize Olawale (the sole backup to Elliott for the game, for some reason) was the first read on the play running a wheel route. We’ve seen Dallas have success on this concept with Elliott and Tony Pollard. The route is an option route, if the linebacker drops back the pass is supposed to come early underneath the LB, that’s obviously what Prescott read. If the linebacker comes forward the read is to go past the LB, that’s what Olawale read. If Olawale had looked back, perhaps it gets caught for a first down. Instead, Dallas tried (and predictably missed) a field goal.

Right after the Cowboys’ missed field goal, the Bears had a shot to take a commanding lead and their offense was certainly game to do so. Sitting at the middle of the field, the Bears had a third and two with just over two minutes left. If Dallas could get a stop, they’ve have a shot at a game-tying field goal or go-ahead touchdown.

Instead, Michael Bennett lurched forward into the neutral zone for no real reason other than trying to anticipate the snap count, and the Bears got a gift first-down conversion because of it. As a result, the Bears moved into the Cowboys’ territory and then ground the clock out over ten plays, capitalizing with a touchdown to go up 17-7 at halftime.

Cordarrelle Patterson jukes out every single defender for a first down

The Bears got the ball to start the second half and had an opportunity to really put their foot on the Cowboys’ necks with another touchdown drive. After moving the chains a couple times, the Bears drew a third and nine at their own 34-yard line courtesy of a Bennett sack. Then, the unthinkable (but also totally predictable) happened.

Cordarrelle Patterson, a lightning quick return specialist, took a short completion, way short of the sticks, and broke away from six potential tacklers. By the time Chidobe Awuzie finally brought him down, Patterson had picked up 33 yards to not only convert the first down but move the ball to the Dallas 33-yard line. Six plays later, the Bears scored a touchdown to go up 24-7 and the game was effectively over with 8:18 left in the third quarter.