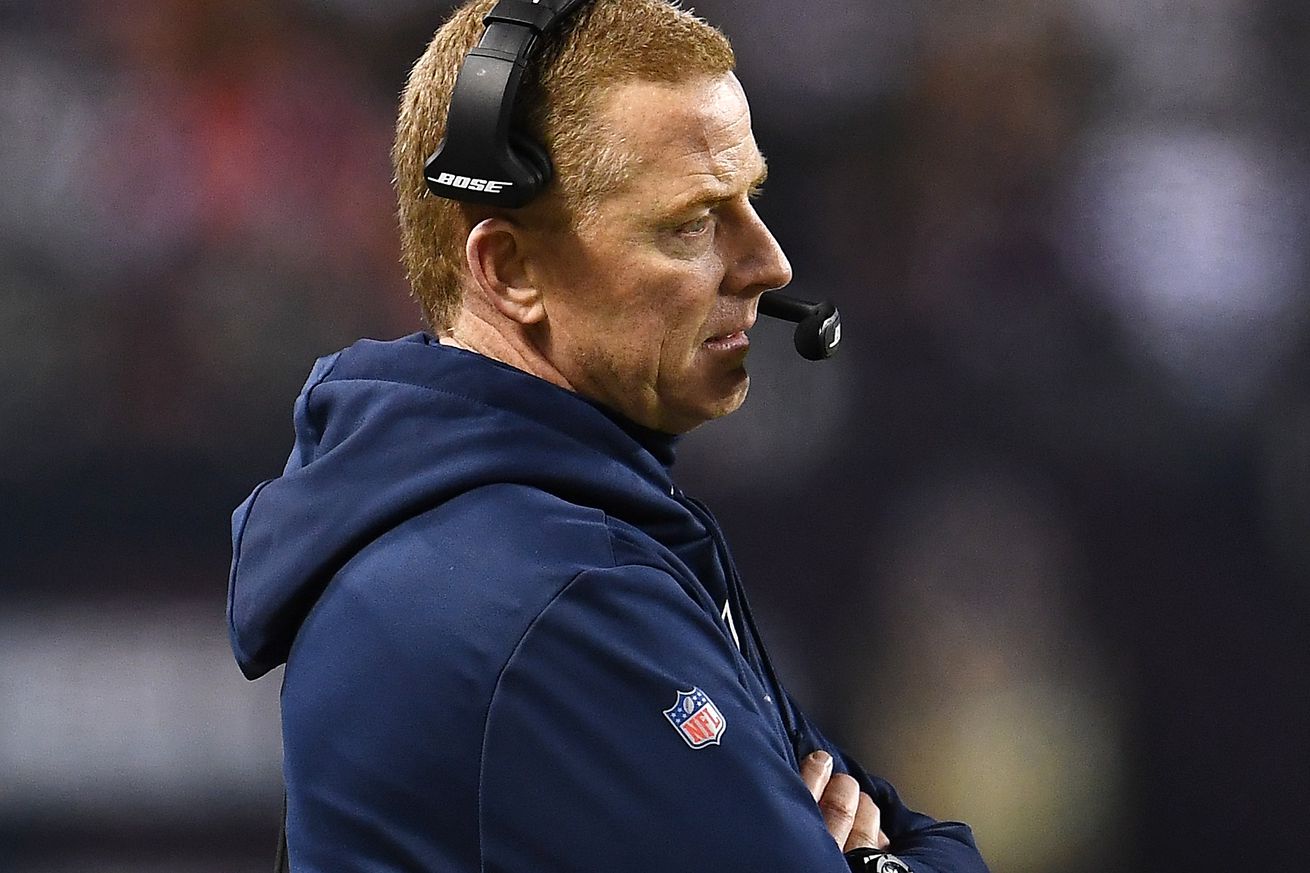 Plus more news to start your week off.

Not that there is any surprise to this, but Ian Rapoport reported on Sunday that it very unlikely for Jason Garrett to be the head coach of the Dallas Cowboys next season.

“It does appear to be heading to a divorce,” Rapoport said on Sunday. “The only way from what I understand Jason Garrett could save [his job] is make the playoffs, go deep into the playoffs, most likely to the NFC title game.”

Garrett is in his 10th season as Dallas’ head coach. He sits at 83–66 in his career, but the Cowboys have won just two playoff games in Garrett’s tenure. Dallas has not reached the NFC Championship since 1995.

The Cowboys fell to 6–7 on Thursday after a loss to the Bears, losing their third straight game and fourth in the last five weeks. Dallas has not defeated a team over .500 this year.

From @NFLGameDay: The #Cowboys are headed to a divorce with coach Jason Garrett, unless Garrett saves it by leading the team deep, deep into the playoffs. pic.twitter.com/q4QhfE0Ifr

Was the next Dallas Cowboys head coach at AT&T Stadium on Saturday? – RJ Ochoa, BTB

Therefore, RJ poses the question: did the next Cowboys head man coach inside AT&T Stadium over the weekend? Between Lincoln Riley and Matt Rhule, it is certainly a possibility.

While the Cowboys were not at AT&T Stadium over the weekend, that doesn’t mean that football wasn’t played there. The Big 12 Championship Game was on Saturday and the Oklahoma Sooners won. There is a possibility that it wasn’t the last game that Lincoln Riley will win there for the foreseeable future.

Riley is the head coach of the Oklahoma Sooners and the latest reports continue to connect him to America’s Team. Many Cowboys fans have been obsessed with the idea of Riley leaving Norman for the DFW metroplex for about a year now; his success at the collegiate level cannot be denied.

The Sooners are among the class of the college football ranks but if and when the Dallas Cowboys head coaching job does become available, one would have to imagine that Riley would give it serious consideration if asked. Of course, the other coach in Arlington on Saturday could also be a candidate to replace Jason Garrett. The job that Matt Rhule has done with the Baylor Bears didn’t culminate in a win on Saturday, but it’s very impressive.

Sherrington writes on the same topic, as both the Oklahoma and the Baylor coach are hot commodities in the coaching world. Rhule has interviewed for open positions recently.

Even before this season, Rhule’s results had earned him notice. He’s interviewed with the Jets and Colts. He might be working in New York now if he’d been allowed to hire his own staff.

Could it be a sticking point with Jerry if the Cowboys’ boss were interested? Not unless he believes anyone on Jason Garrett’s staff is worth fighting over.

Rhule is also under contract through 2027 with a buyout his boss, Mack Rhoades, calls “aggressive.” But if a branch on the Tom Coughlin coaching tree and maybe the most well-rounded coach in the Big 12 were available, Jerry shouldn’t let money get in the way.

While we all know about Riley.

Take Riley, who grew up in Muleshoe, Texas. Big Cowboys fan. He’s making a little more than $6 million a year through 2023. As a reference point, Garrett, in the last days of his contract, draws $6 million. According to reports, if Riley left after this season, he’d owe the university $4.6 million before the lawyers got cranked up.

Riley has built a great foundation at Oklahoma with a brilliant future. If he could keep Alex Grinch as defensive coordinator, no telling what the Sooners’ ceiling might be. The problem is that the NFL keeps knocking on Riley’s door. They’re interested in the secrets of a coach who’s built two Heisman quarterbacks and No. 1 draft picks. Kliff Kingsbury is coaching the Cardinals because of his well-deserved status as a quarterback whisperer. Riley is just as good at Xs and Os, and, as an added bonus, he wins. A lot.

Make no mistake: Riley wants to be an NFL coach someday. Sure, he could wait. But if Jerry were to come knocking, could he turn down a talented young team and quarterback?

Despite the NFC East being below average this season — and with the winner of the division hosting a playoff game — there has been no consideration of reseeding playoff teams, reports Schefter.

With the NFC East winner poised to have a .500-or-worse record and with NFC wild-card teams expected to have double-digit victories, there have been increasing public calls for the playoffs to be reseeded.

But those calls are mostly from fans and the media; they have not happened within the NFL.

A source with knowledge of the NFL’s thinking said the idea of reseeding teams has come up but “has gotten zero steam. It’s never been a consideration.”

So one of the NFC East teams, likely the Dallas Cowboys (6-7) or the Philadelphia Eagles (5-7), will wind up hosting a playoff game at a time when its record is worse than that of the wild-card teams that open the postseason on the road.

Does the Eventual NFC East Winner Really Deserve a Playoff Spot? – Jess Haynie, Inside The Star

But, does that mean the divisional winner deserves a playoff spot — or to host a playoff game? That’s debatable.

Winning the division has to mean something or else you’d just have to get rid of them completely. That’s why I think the answer here is found in the middle; give division winners a playoff spot and nothing more.

Give the Cowboys or Eagles, or any other future division winner with a weak record, a spot in the tournament. But then make them go on the road if the wild card team has a superior overall record.

This year it’s probably going to work out to our benefit, Dallas fans, but imagine if we were that other team. Think how you’d feel if the Cowboys were on the wrong end of the current rules.

I really don’t think this is that complicated. Seems like the best solution for overall fairness across the league. Honestly, I’m surprised it didn’t come into effect after 2014 or one of the other times this issue has come up.

Special teams has been a glaring weakness for the Cowboys this season, and that includes Brett Maher. The team worked out kickers over the weekend, including former Patriots kicker Kai Forbath.

Maher made one of two field goal attempts in the loss to the Bears and has an NFL-leading 10 missed field goals.

The Cowboys are familiar with Forbath. He was in their training camp in 2011 recovering from a quad injury. But the Cowboys eventually released him in 2012 and signed Dan Bailey, who would go on to become one of the more successful kickers in franchise history.

In his one game with the Patriots in Week 13, Forbath made his only field goal, a 23-yarder, but he went one for two on extra points.

Vizcaino had been on the offseason rosters of the Jets and Bengals but didn’t make their active rosters.

Which NFL teams can clinch a playoff spot and which can be eliminated in Week 14? – James Brady, SB Nation

What does the latest playoff picture look like? (It’s not hard to tell which team is different than the others.)

If the playoffs started today, which teams would be in?

Again, only the Saints, Ravens, and Chiefs have made it in so far, and both conferences have wild card teams with a better record than a division leader. That said, the disparity is greater in the NFC.

The Rams looked really good on Sunday night. We’ve got one weird way that the Cowboys could handle their game against Los Angeles. Listen to The Ocho to find out.