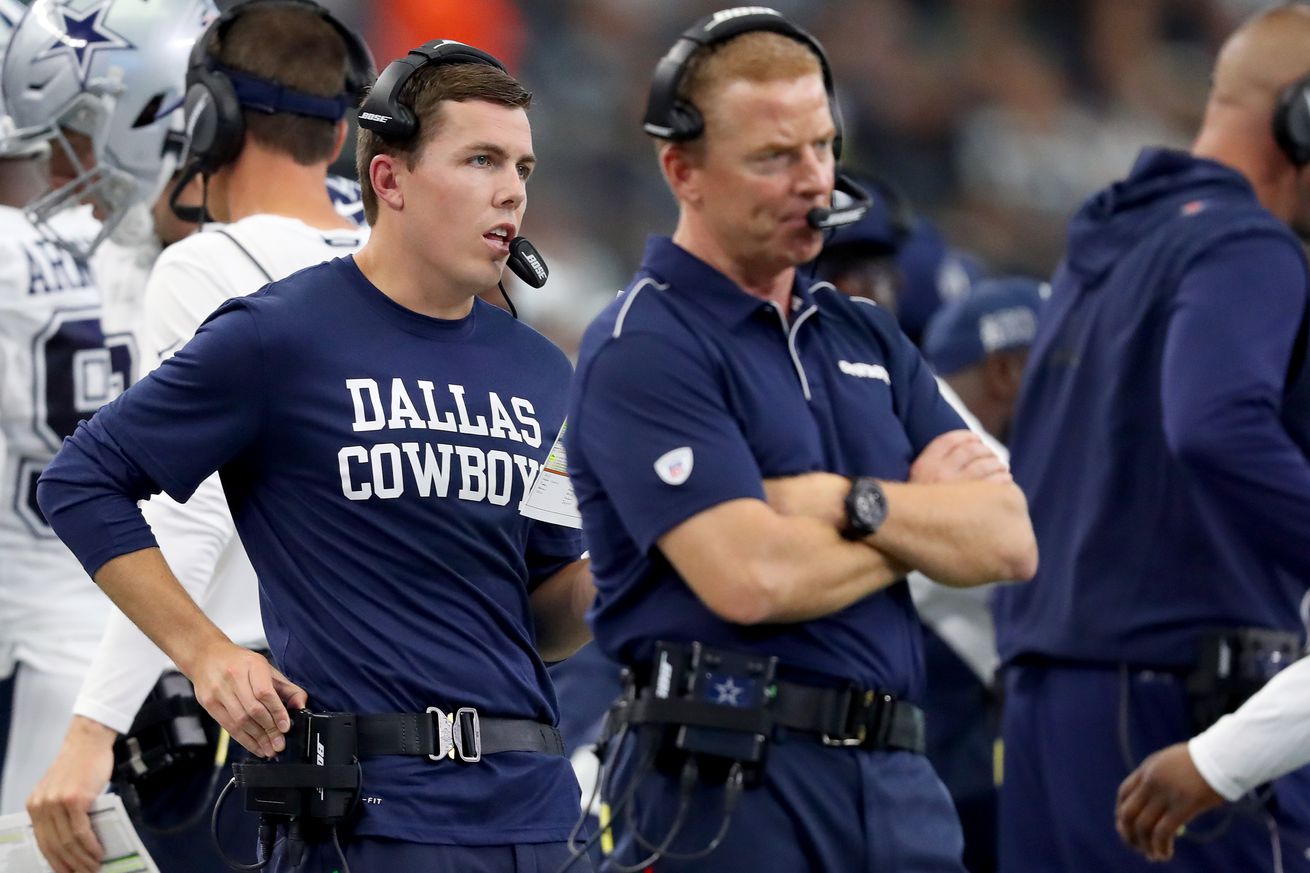 Even if Jason Garrett returns next year, there could be some turnover on this staff.

Despite being the heavy favorite to win the division and make the playoffs, it almost seems like a foregone conclusion that Jason Garrett will not be the Cowboys’ head coach next year. That likely means a significant amount of turnover on the rest of the coaching staff, though there are at least some members who either should be retained or are likely to be retained. Here’s a breakdown of each offensive coach and whether or not they deserve to come back in 2020.

For all the negativity surrounding Garrett right now, it’s easy to overlook all the good he’s done for Dallas. In the years between the Cowboys’ last Super Bowl victory and Garrett’s first game as (interim) head coach, Dallas had compiled a regular season record of 117-115 and a postseason record of 2-7. With three games remaining in 2019, Garrett has gone 83-66 in the regular season and 2-3 in the playoffs.

Obviously the bar is a lot higher than that for a team like the Cowboys, but it’s undeniable that Garrett has elevated the team in a way that nobody has since the dynasty of the 90’s. Garrett has won the division three times and is very close to doing it a fourth time this year, which would mark only the second time this century a team has won the NFC East in consecutive years.

That’s why Jerry and Stephen Jones really, really don’t want to fire Garrett. He’s brought a positive culture to Dallas, rebuilt the team on the fly, and has had only one losing season his whole career (due to having Brandon Weeden and Matt Cassel as his backup quarterbacks). But the fact is Garrett has squandered an insanely talented roster in 2019, and in an industry like the NFL, it’s all about what you’ve done most recently. And recently, Garrett hasn’t done enough.

At the age of just 31, Kellen Moore was charged with coordinating the Cowboys offense, and while the first-time play-caller and second-year coach has had some growing pains, he’s ultimately been a huge success. The offense ranks first in total yards and passing yards, tenth in rushing yards, ninth in points per game, and second in DVOA.

More importantly, Moore has elevated the play of both Dak Prescott and Ezekiel Elliott. Prescott currently leads the league in passing yards, is tied for fourth in touchdown passes, third in net yards per attempt, third in QBR, third in EPA, first in DYAR, and second in DVOA. And while Zeke is fifth in the league in rushing (a low figure for him), he’s at an all time high in value, ranking third in DYAR and sixth in DVOA.

While the offense has had its fair share of problems this year, Moore’s overall effect has been a huge net positive. Another year running the offense could see him improve and he might even get better without Garrett looking over his shoulder. With what he’s done this year, it’s hard to imagine the Joneses actually getting rid of the whiz kid from Boise.

Speaking of the improvements Dak has made this year, it all really started with Jon Kitna. The new QB coach came in with a reputation as being a stickler for mechanics, especially footwork, and helped Prescott improve his throwing motion drastically. As a result, Prescott has seen his accuracy increase, with his bad throw percentage of 14.5% ranking seventh lowest in the league and marking a 3% drop from last year, when he had the 13th highest percentage of off-target passes.

Kitna has also helped unleash Dak’s long ball, and while much of that has to do with Moore’s play calls, Kitna has boosted Prescott’s confidence. He’s talked frequently about letting it rip if he sees a good matchup deep down the field, which has led to Prescott being more aggressive. Prescott’s leap forward this year has as much to do with Kitna as it does Moore, so this decision is easy.

No offensive coach has been in Dallas longer than Gary Brown, and that’s for a reason. Brown was hired prior to the 2013 season and immediately got results, with DeMarco Murray hitting 1,000 rushing yards for the first time in his career. The next year, he followed it up by posting a monstrous 1,845 yards. Brown even helped Darren McFadden cross 1,000 yards rushing after Murray left, with the veteran hitting that milestone for the first time in five years.

Since then, Brown has had the ultra-talented Ezekiel Elliott to work with, and results have been good, but Brown has also overseen the rather quick development of rookie Tony Pollard this year, even though he’s been underused. Finally, Brown had some of the more underrated moments on the Cowboys’ All or Nothing season, showcasing the camaraderie he built between his running backs and the way he handled the off again, on again nature of Zeke’s suspension. Not enough good things get said about this coach.

When Sanjay Lal was brought in to coach the receivers for the 2018 season, a lot of Cowboys fans heaped praise on the coach, myself included. While it turned out to be somewhat overstated, Lal has shown why he was so highly thought of at the time. His emphasis on route running drew praise from Cole Beasley, which isn’t an easy thing to do.

Having Amari Cooper, arguably the best route runner in the NFL right now, certainly helps, but Lal also helped Cooper break out of a funk he had endured in Oakland for a year and a half. More importantly, though, Lal has overseen the rapid development of Michael Gallup into a legitimate all-around threat in only his second season. Add in the career resurgence of Randall Cobb – who’s already surpassing any of his stats from the past three years – and it’s clear Lal is doing something right.

Initially going through a lackluster rotation, Swaim started to emerge as the top guy, but an injury in Week 11 ended his year. Jarwin and Schultz then began to share snaps, and Jarwin had a coming out party in the regular season finale. This year, with Witten returning, we haven’t been able to see much growth from either Jarwin or Schultz, which makes it hard to evaluate Nussmeier. He does have history calling college offenses, and was considered for the coordinator role before Moore got it, but the jury’s out on what that actually says about his coaching skills.

When the Cowboys promoted Marc Colombo to offensive line coach midway through last year, he had an immediate impact and helped drastically improve the offensive line play. Even so, the unit underperformed and Prescott got sacked far too many times.

This year, though, Colombo’s unit has gotten a lot better. Travis Frederick’s return has obviously helped, but Connor Williams looked a lot better than he did in his rookie year before going down with an injury, and La’el Collins has quietly been one of the league’s best right tackles. Tyron Smith and Zack Martin have both dominated as well, and Pro Football Focus ranked the Dallas line as the league’s fourth best unit halfway through the year.

According to Football Outsiders, the Cowboys rank second in run blocking and pass blocking and have the lowest percentage of stuffed runs this year. The team ranks 12th in pass block win rate, meaning that they’re keeping a clean pocket for at least 2.5 seconds 60% of the time. Additionally, Prescott has the third lowest sack percentage in the league right now, a very encouraging improvement from last year.

That’s it for the offensive coaches, with the overarching takeaway being that most of these guys have been good. A similar breakdown of the defensive coaches will be coming soon.