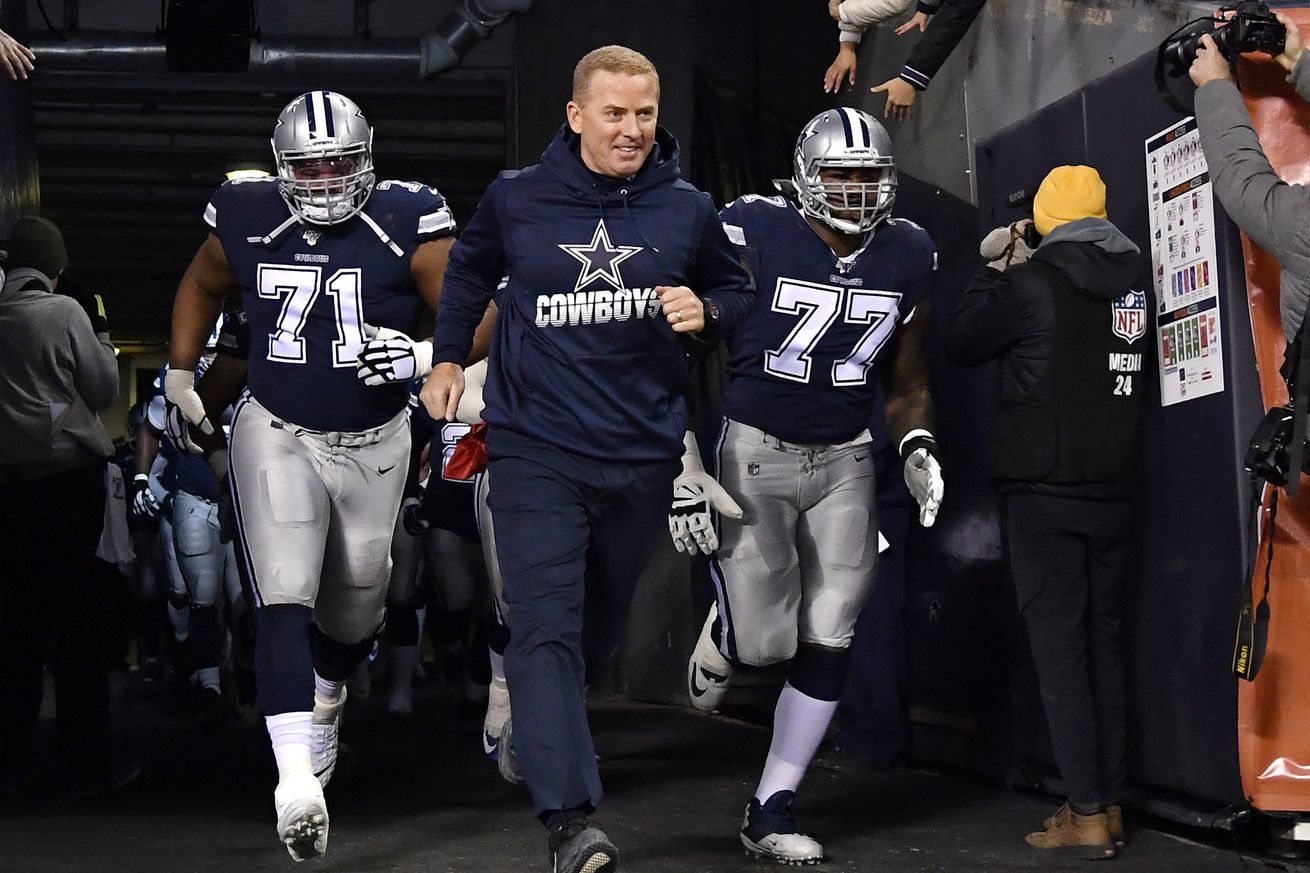 Can the Cowboys dig deep and find something to pull them out of their slump to salvage the season?

Jason Garrett is trying to shake things up for the Cowboys.

In an attempt to shake his team out of a three-game losing streak, Cowboys coach Jason Garrett took time during Monday’s team meeting to show players some successful plays from the past two seasons.

”It was like a highlight reel,” right tackle La’el Collins said. “They were all fantastic plays. Everything went well on them, offense and defense. So it just shows the type of team we have, the players we have. It’s just putting it all together so that you see what it looks like when we do it the right way.”

Garrett made a similar move after the Cowboys lost three games in a row after their 3-0 start to the season. The team responded with their most complete game of the season in a 37-20 victory against the Philadelphia Eagles.

Cowboys remain confident despite being in the middle of second 3-game losing streak of season-Calvin Watkins-SportsdayDFW
The Cowboys have lost seven of their last 10 games but somehow maintain a belief that they can turn it around with three games left.

The Cowboys have not handled adversity well and must find a way to solve their problems heading into Sunday’s game against the Los Angeles Rams.

Dallas is tied with Philadelphia for first place in the NFC East. The teams will meet in two weeks. The Rams, meanwhile, are also fighting for a playoff berth. They’re a game behind the Vikings for the sixth and final playoff spot in the NFC.

“Every game is big because it’s the next game,” defensive tackle Michael Bennett said. “Just focusing on the task and taking it one game and one snap at a time. You can’t worry about the outside noise and what the media is saying and what the fans are saying. We just have to play at a high level and play for each other.”

Cowboys RB Ezekiel Elliott doesn’t care that he’s reached 1,000 rushing yards for the third time in his four-year career. All he cares about is the fact that his team is not winning games.

“Win ball games, man. Trying to win a Super Bowl,” he said. “Really don’t care about that number. Who cares if you rush for 2,000 and don’t even make the playoffs?”

Elliott has 1,071 yards through 13 games this season, ranking fifth in the NFL. His personal stats combined with Cowboys quarterback Dak Prescott and wide receiver Amari Cooper’s set a new franchise record. For the first time in team history, Dallas has a 4,000-yard passer (Prescott), a 1,000-yard rusher (Elliott) and a 1,000-yard receiver (Cooper) in a single season.

If the Cowboys are going to be resurrected, they will have to rely heavily on their offense- David Moore-Dallas Morning News
There is only one aspect of the Cowboys that can carry them in the final three weeks and it’s going to have to be their offense.

But let’s be honest. We are deep enough into this unraveling season to understand there’s only one way for this team to right itself over the final three games of the regular season. There’s only one phase capable of allowing the Cowboys to maintain their tenuous grasp on the NFC East title.

That’s the strength of this underachieving team. It’s not the defense, a group that has only a casual acquaintance with the concept of tackling.

It’s not special teams, a bunch that encourages observers to close their eyes and cross their fingers every time they take the field.

The Dallas offense ranks No. 1 in the NFL. Dak Prescott has thrown for 4,122 yards to lead all quarterbacks. Running back Ezekiel Elliott and receiver Amari Cooper have already broken the 1,000-yard barrier and receiver Michael Gallup isn’t far behind.

Does anyone doubt the only chance the Cowboys have against the hard-charging LA Rams on Sunday afternoon is to best them in a shootout?

Having opportunity to win division should count for something no matter how bad NFC East is – David Helman- DallasCowboys.com
The NFL doesn’t need to re-seed anything just because the NFC East could have a division winner with a losing record, get over it.

How’s that going to sit with fans and media all over the rest of the league? Not well. People get tired of hearing about the Cowboys and Eagles when they’re good. It’s got to be twice as annoying to hear about when they’re bad.

But honestly, deal with it. You didn’t hear this much hand-wringing when the NFC West was a dumpster fire, or when the AFC South was an annual example of ineptitude. Because none of the teams in those divisions are as big or as polarizing as the Dallas Cowboys and Philadelphia Eagles. Sorry if that sounds arrogant, but it’s true.

The NFC East is bad. It won’t be the first time or the last time it happens. Winning your division should still count for something. Grumble all you want, but there’s nothing wrong with the NFL’s current format. A mediocre team is going to host a playoff game, and if the Seahawks/49ers/Vikings/Whoever are as good as we think they are, they should be capable of winning it on the road.

What will the coaching market look like for the Dallas Cowboys should they move on from Jason Garrett.

From 2011 through 2019 with the Carolina Panthers, Ron Rivera had a 76-63-1 record. Garrett has a better regular-season record at 83-66, but Rivera has a Super Bowl appearance on his résumé (2015). In 2007, Rivera interviewed with Jones, so the Cowboys know him. He also has a defensive background that would allow the offense to be “Dak friendly.”

From 2006 through 2018, Mike McCarthy was coach of the Green Bay Packers, overseeing the quarterback transition from Brett Favre to Aaron Rodgers. He has a 125-77-2 record and made the playoffs in nine of his 13 seasons. He has a championship, winning Super Bowl XLV at AT&T Stadium. Things grew stale with Rodgers at the end of their run together, but McCarthy inflicted two painful playoff losses on the Cowboys in 2014 and 2016. The body of McCarthy’s work needs to be recognized more than the way it ended.

Troy Aikman mentions that some NFL coaches see the Cowboys roster as overrated -RJ Ochoa- Blogging The Boys
Talk about talent versus coaching has been a hot debate.

Cowboys legend, HOFer, and FOX analyst Troy Aikman said during his weekly appearance on 1310 The Ticket that he’s asked around this season and that there are people in the NFL who do believe what we’ve all feared… that the Cowboys are in fact overrated.

“Here locally, I listen the various shows, I certainly read the newspaper, and the discussion is… is this team really as talented as what everyone thought coming into the season? And I’ve reached out to a bunch of people around the league that have played the Cowboys, that have studied them on film, and there are coaches that think this is an overrated roster. But I think for the most part they believe that it’s a really talented team.”

Football, sports in general really, is a results-driven business. Maybe you don’t feel that the Cowboys are overrated, however, their 6-7 means this team is underachieving which by definition means that they are overrated in some respect.

Troy Aikman says until Jerry Jones makes one change, Cowboys are ‘going to have some problems’ -Jeff Kerr- CBSSports.com
Aikman has aspirations to be a general manager, but doubts it will happen with the team he once played for.

If Aikman gets that opportunity, he doesn’t expect it to be with the Dallas Cowboys, the only NFL team he ever played for. The reason: Jerry Jones.

”I doubt it. I mean, I think that’s a real long shot,” Aikman said on 1310 The Ticket regarding his chances of becoming the Cowboys general manager. “I believe that it’s unlikely that Jerry will ever bring somebody in that can help this football team in that regard just because he’s been real stubborn and steadfast, in that he’s the one in charge.

”I think in a lot of ways until that changes, this team’s going to have some problems. Would he ever ask me to come be a part of it? I think that’d be a real leap of faith. I don’t envision that happening, and I don’t envision it happening at any point, quite honestly, no matter who’s in charge out there.”

Could the next three games be the last for these Cowboys players? -Brian Martin – Inside The Star
The Cowboys have three games left to play but could we also be seeing the final three games for a few players in a Cowboys’ uniform?

The Dallas Cowboys have a lot of pending free agents along the defensive line who could depart after the season in free agency. Right now it’s hard to imagine anyone of the four mentioned above returning considering the money they could make elsewhere, but Antwaun Woods could likely be retained cheaply. For me, upgrading the DL this offseason is quite possibly the top priority.

Frederick’s Blocking Out Hunger Foundation is dedicated to providing support for children in the Dallas area who struggle with hunger. The Nourish2Flourish program has provided over 100,000 meals to over 6,400 children. Visit http://www.nfl.com/manoftheyear to read more about Frederick’s positive impact on the community.

What do we need to know about the Los Angeles Rams? We checked in with the fine folks from Turf Show Times to find out.

Here’s how Cowboys fans are feeling at Week 15.