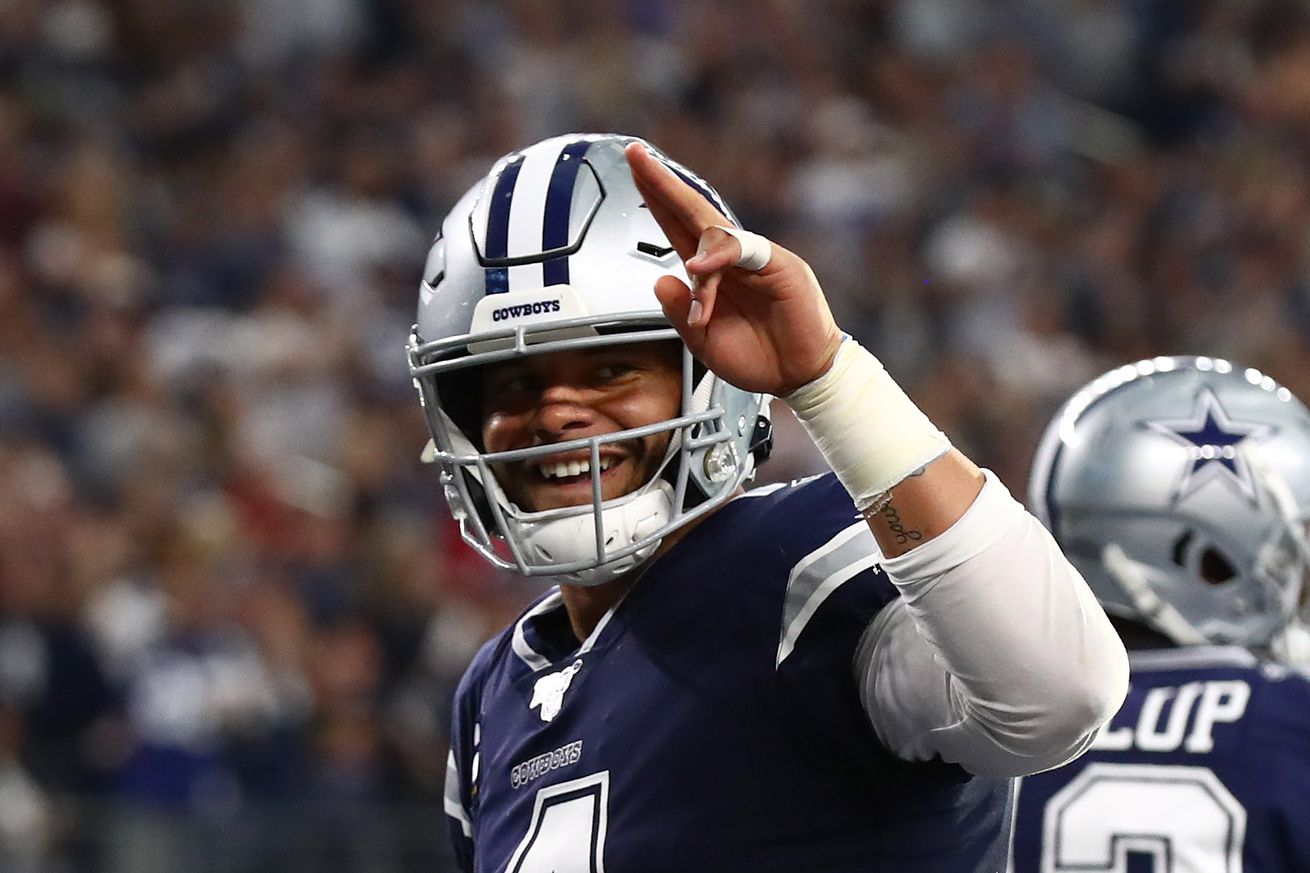 Plus, the Cowboys signed a former Super Bowl MVP on Tuesday

The NFL announced late Tuesday night which players were selected to the annual Pro Bowl and the Cowboys, despite a middling record, are sending four players to the all star game. Not surprisingly, three of them came from the Cowboys’ star-studded offensive line (Tyron Smith, Zack Martin, Travis Frederic), plus Ezekiel Elliott got in.

This is becoming a bit of a tradition at this point. The Cowboys annually field one of the best offensive lines in football, and a big part of that is their trio of perennial Pro Bowlers – who have now combined for 18 Pro Bowl bids.

As the most veteran of the group, Smith leads the list. This year marks his seventh-straight selection to the Pro Bowl, as he hasn’t missed out on the honor since he initially earned it back in 2013. That number pushes him past Rayfield Wright for most appearances by an offensive tackle in franchise history.

For Frederick, it’s a return to normalcy after a one-year layoff from the game. Frederick missed the 2018 season after being diagnosed with Guillain-Barré Syndrome last summer, but he rebounded to earn his fifth Pro Bowl selection this year. That ties him with Andre Gurode for the most Pro Bowl appearances by a center in Cowboys history.

Even with a stellar statistical year, Dak Prescott couldn’t overcome a 7-7 record and the old-guard of NFC quarterbacks to make the Pro Bowl.

1. Dak Prescott, QB, Dallas Cowboys. Prescott is easily the biggest snub. The 26-year-old has dealt with a league-high 25 drops this season, but he still ranks third among quarterbacks in completions, second in passing yards, fifth in total touchdowns and fifth in yards per pass attempt. He’s also at or near the top of every advanced efficiency metric, including Total QBR, in which he sits third (73.3) behind only Lamar Jackson and Patrick Mahomes.

The Cowboys were already thin at linebacker with Leighton Vander Esch out indefinitely and Sean Lee banged up, but Luke Gifford found himself on the injured reserve Tuesday. In his place, Dallas got themselves a former Super Bowl MVP for depth.

With injuries at the position that could leave them compromised for the final two games, the Dallas Cowboys on Tuesday signed veteran linebacker Malcolm Smith, sources told ESPN.

Smith and veteran Ray-Ray Armstrong both worked out for the Cowboys, with the team concerned about its depth with Leighton Vander Esch likely to miss his fifth straight game with a neck injury, rookie Luke Gifford needing surgery to repair a fractured forearm and Joe Thomas battling a knee injury.

Smith, 30, has a history with passing game coordinator Kris Richard from their time together with the Seattle Seahawks. He was MVP of Super Bowl XLVIII and has started 102 games for four teams in his career. He played in two games with the Jacksonville Jaguars this season before his release in November.

The Cowboys did the most Cowboys thing ever by blowing out the streaking Rams on Sunday after previously looking done for the last two weeks. While people around the league aren’t getting on the bandwagon just yet, it was a reminder of how dangerous this team can be.

The Cowboys looked dead heading into Sunday’s game with Los Angeles Rams, but they had the look of a contender again in a dominant 44-21 victory over the Rams, all but ending Los Angeles’ playoff hopes.

The Cowboys ran it. They threw it. And they played good defense for much of the day.

That’s playoff-winning football. But now they have to go play an Eagles team on the road, a team that has squeaked out close games the past two weeks against two bad NFC East teams.

The blowout victory over the Rams also marked the debut of Kai Forbath in a Cowboys jersey, replacing the inconsistent Brett Maher. While it was a very small sample size, Forbath did enough to earn the trust of fans everywhere.

In Kai Forbath, the Dallas Cowboys now have a proven veteran kicker who looks to have already stabilized their kicking woes. There’s no reason to believe he can’t continue to do so considering he’s made 85.8% of his kicks in his career, which is a good news for a team making a push for the playoffs.

The doom and gloom surrounding the Cowboys kicking situation seems to be over. Kai Forbath has emerged from the fog and given the organization, the coaching staff, and his teammates confidence he can come through when needed. Quarterback Dak Prescott even suggested as much.

“When you’re not getting those touchdowns and you’re getting down there and still able to capitalize on those three points [is great],” said Prescott. “Kai did a great job tonight, and I thank him for that.”

The Cowboys and Eagles are tied for the lead in the NFC East, and now Dallas will travel to Philadelphia on Sunday to play in what is effectively going to be a battle for the division crown and the right to host a team in the playoffs.

The NFC East: It’s pretty bad! Not much of a marketing slogan, but true nonetheless. The four division teams have a combined record of 20-36 this season. The big-ticket game of the season — Sunday’s matchup between the Philadelphia Eagles and Dallas Cowboys at Lincoln Financial Field (4:25 p.m. ET, Fox) — features a pair of 7-7 teams that are in position to claim the division crown despite their best efforts.

A Cowboys win on Sunday gives them the NFC East title no matter what happens in Week 17, meaning the division could have an 8-8 winner for the first time in its history. Bad enough for the idea of playoff reseeding to be brought up, even if it was never seriously considered by the NFL.

Since the 1970 merger, only two NFC East champions have finished with fewer than 10 wins (excluding the 1982 strike-shortened season): the 2011 New York Giants and the 2015 Washington Redskins. The good news? Those 2011 Giants went on to beat the New England Patriots in Super Bowl XLVI. Records and sins get wiped clean once the playoffs start: It doesn’t matter how you get in, just that you get in.

Cowboys owner Jerry Jones responds to Troy Aikman’s criticism: ‘He would do it exactly like I do’ – Jori Epstein, USA Today

Fox analyst and former Cowboys legend Troy Aikman has been very critical of Jerry Jones in recent weeks, going so far as to hit Jones for his over-involved role in the front office. On Tuesday, Jones responded to his former quarterback.

Troy Aikman, FOX’s lead NFL color analyst, has recently reiterated his interest in running an NFL team as a general manager. But he said recently he wouldn’t want to be general manager for an owner like Jones, whom Aikman deemed “real stubborn and steadfast that he’s the one in charge.”

The Cowboys owner and general manager understands that, he said Tuesday morning. But Jones guessed if Aikman were in a position of power similar to him, the former passer wouldn’t run a team any differently if he had the chance.

“Now I would wager that if he [gave everything] to buy the team, he would do it exactly like I do it,” Jones told Dallas radio station 105.3 The Fan. “I would wager that. Because you just want to, ultimately, with that much on the line and that much at stake, you want to break any ties and make the calls.”

Cowboys’ Jourdan Lewis ‘appreciative’ during career-best season in 2019: ‘They understand I can do everything’ – Patrik Walker, CBS Sports

Fans were calling for Jourdan Lewis to gain a more prominent role in the secondary most of last year and during the start of this year, and now that the diminutive cornerback has done so, they are being vindicated by his electric production.

When asked after the game about being tasked with putting the stops on Kupp, a humble Lewis said it’s all about playing within his own talent and trusting what defensive coordinator Rod Marinelli and passing game coordinator Kris Richard ask him to do.

”I’m just doing our defense — playing within the scheme,” he said. “Playing disciplined football and understanding … we’ve got to play within the defense and do our jobs. We did that today. I’m just looking forward to next week.” With increased play has come a marked upturn in his already solid production over his initial 2.5 seasons as a rotational piece.

Despite being active in all 14 games this season, Lewis has more interceptions and sacks than he’s ever had (as noted above), but equally impressive is how opposing quarterbacks do against him in coverage. In 2018, quarterbacks registered a passer rating of only 85.6 when targeting receivers covered by Lewis, but he’s gone one step further and forced that rating downward to 77.9 in 2019; and he has a 63-yard fumble recovery for a touchdown this season, to boot.

Dak Prescott ranks at or near the top of every advanced statistic that exists to measure the quarterback position, and the Cowboys offense as a whole ranks similarly high in most categories, but the wins haven’t added up. Despite what the math says, some have begun to argue that it’s because Prescott isn’t good enough to be the leader of an offense.

But if the Cowboys are going to win the NFC East and make an unexpectedly deep playoff run, Moore must find the right balance between Ezekiel Elliott and Prescott. It’s not easy because Prescott has improved so much as a passer. He ranks second in the NFL in passing yards (4,334) and fourth in touchdown passes (26) to go with a passer rating of 99.3.

That said, there are only a couple of quarterbacks in the entire league — Aaron Rodgers, Drew Brees — who are good enough to be the epicenter of a team’s offense each and every week.

No matter how much those guys throw the ball, you feel good about their ability to help their team win. A running game helps them, but they don’t necessarily need it. Prescott isn’t that type of quarterback. The more he throws, the more his flaws are exposed, just like any other passer who’s not a future Hall of Fame quarterback. Moore’s task is to find the sweet spot.

Let’s talk about the Pro Bowlers on the Cowboys.