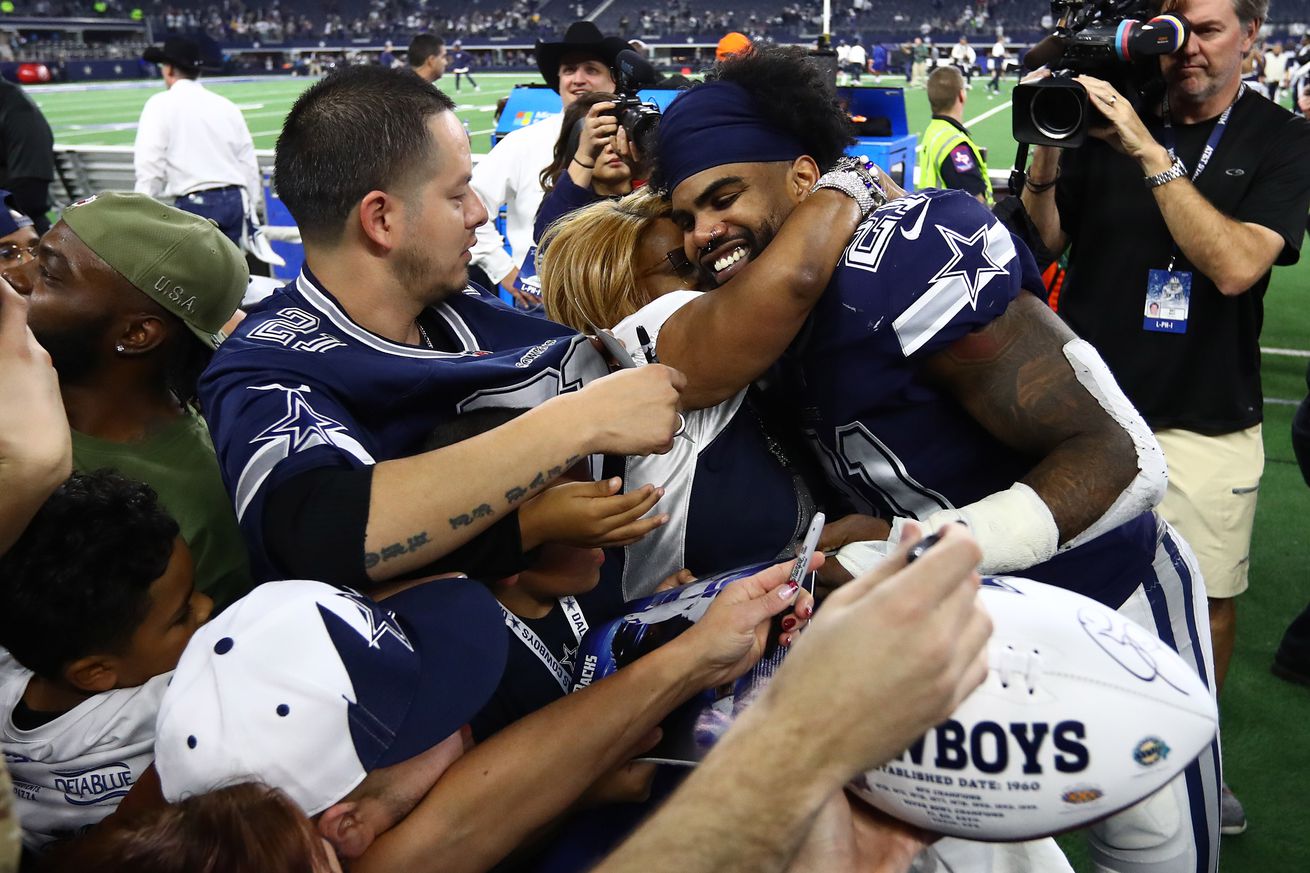 Cowboys running backs Ezekiel Elliott and Tony Pollard were quite the load for the LA Rams.

Without question, the Cowboys 44-21 win over the Rams would not have been possible without a phenomenal day on the ground. The Cowboys ran over the Rams to the tune of 260 yards and flipped the script from last year’s playoff loss in Los Angeles. It was the second game this season that both Ezekiel Elliott and Tony Pollard each rushed for over 100 yards in the same game.

There is a great line from Al Pacino in Oceans 13: “When I move, I slice, and I slice like a damn hammer!”

That reminded me of the way Elliott ran in this game, like tossing a hammer at drywall. The holes are going to be devastating and you can’t predict the size of the entry wound. Elliott was slicing through the Rams’ defensive line and it didn’t matter whether he was taken head on, he was still making large gains.

Ezekiel Elliott is a grown man that makes other grown men look silly when they try to arm tackle him.

Ezekiel Elliott ran with power, precision, and patience, the three P’s. Check out this clip of his best runs in this game and look for three things:

Elliott had a full workload of 24 carries but it didn’t seem like such a huge day because in many ways it seemed effortless. Make no mistake, there was a ton of effort being put in by the blockers and the runners. When everyone does their job well, this is the result. It makes the touchdowns that much sweeter. To which, Ezekiel Elliott had two dogwalks as Brad Sham would say.

Zeke’s second TD of the half!

When you have a hammer in Ezekiel Elliott softening up the defense, it makes them extremely susceptible to a change of pace weapon like Tony Pollard. On this run, you can see that a lot of guys want to make this tackle but they are completely caught off guard with how slippery Pollard actually is:

Starting out with his 44-yard touchdown run, this is the full slate of impact made by Tony Pollard.

The Rams defense were left with their tongues hanging in this game. Tony Pollard brought a whole new definition to efficiency in the run game.

In a game that the Cowboys were pretty much counted out by everyone, they went out and asserted their dominance. If the Cowboys are going to make a comeback, they need all hands on deck. Their identity is built out of their offensive line and a dominant running game. It also might be their ticket to making some noise in the playoffs if they can take care of business in their division. What was so impressive about this game against the Rams is that the Cowboys didn’t need their wide receivers to make things happen. They attacked the air with their tight ends and running backs. They bullied the Rams on the ground with Ezekiel Elliott and Tony Pollard.

Yesterday, the Dallas Cowboys became the 1st team in the last 10 seasons to have multiple rushers (Ezekiel Elliott and Tony Pollard) gain 70+ yards after contact in the same game. pic.twitter.com/PLbbBvDtLP

The Cowboys found balance despite having little impact from their receivers and maybe that will bode well for their chances at making a comeback. The more ways your team can win, the better off they will be. After a few rough weeks, the Cowboys’ run game finally found it’s footing against the Rams. If Ezekiel Elliott and Tony Pollard can continue to be a spark for this team, they will be a hard team to beat.