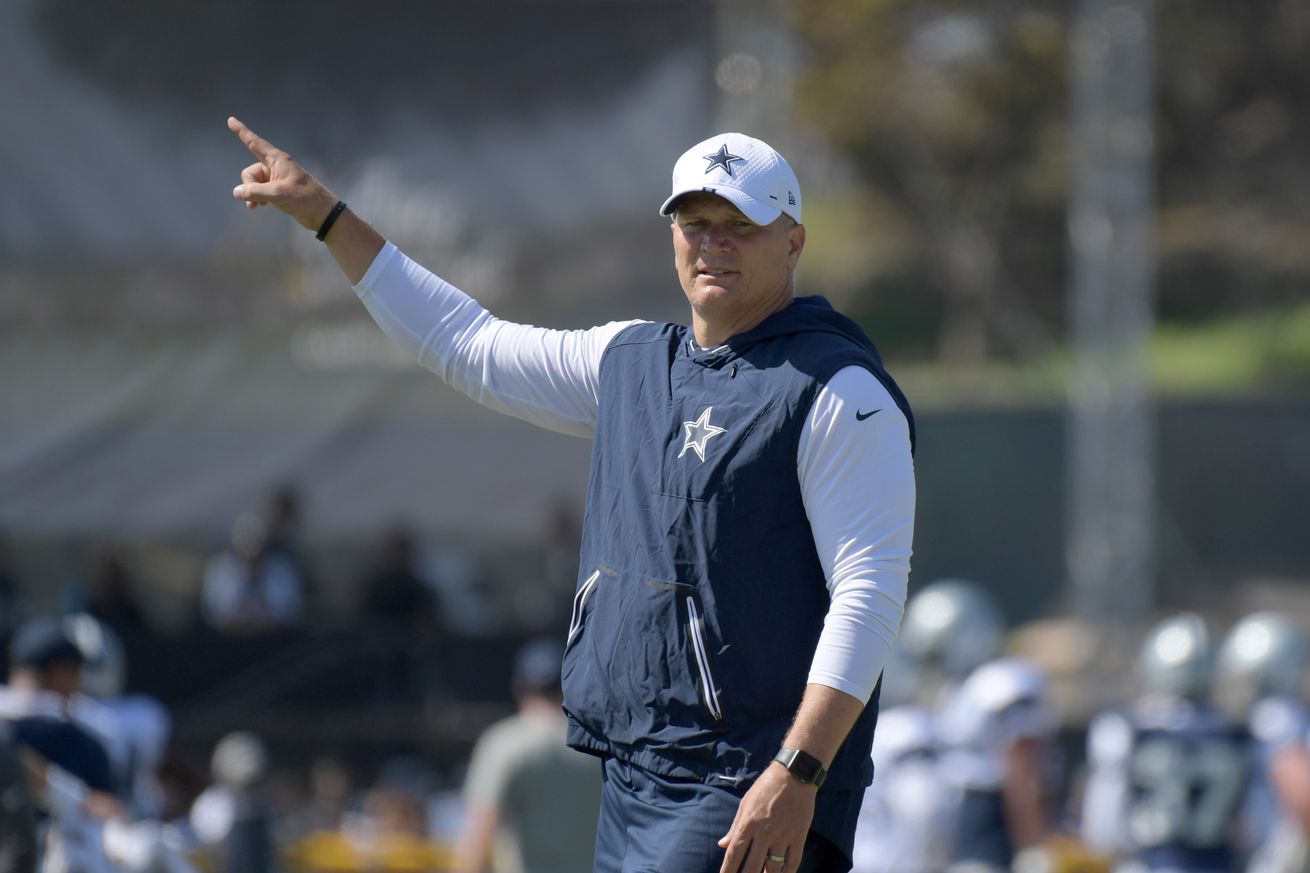 The Cowboys got their man. Now Mike McCarthy has the power to get his – David Moore, Dallas Morning News

McCarthy has been given complete control over all the coaching positions, so now it’s on the new head coach to make the right decisions.

How much authority will Mike McCarthy have when it comes to putting together his staff? Will he have final say or will Jerry Jones intercede? OK, that’s two questions, but you get the idea. There should be no doubt at this stage that McCarthy has been empowered to hire whom he wants. The staff hasn’t been finalized, but it’s clear he’s been given the most latitude since Bill Parcells.

Offensive line coach Marc Colombo and receivers coach Sanjay Lal are held in high esteem by the Jones family. Each man has two years left on his contract. Neither will be part of this staff. McCarthy was asked in his introductory news conference earlier this week if the authority to select was a key negotiating point.

“Well, really there was no negotiating,” he said. “They actually gave me an overview of the staff, and there’s been a lot of input there from a different number of people in the organization. “They actually have done a great job helping me as far as from a recruiting standpoint in more of the contractual type of things that are ahead of us.”

Mike McCarthy is scrambling to assemble a coaching staff. Here’s why it matters so much – Bob Sturm, The Athletic

While the coaching shuffle continues to be an on-going process, the decisions made in the upcoming weeks are extremely important.

Everything is rosy right now in Cowboys Land. They have a new beginning, and there is fresh air blowing through the facility. But every coach in the history of the sport only truly finds out who has his back when the trouble hits. That is when they are either in the foxhole or they are running to the owner to undercut the boss and work their way up the ladder themselves. This is why naming your own staff is the only way to run a proper program and have everyone with a star on their shirt understanding who is in charge of this thing. That premise could be cemented, of course, with a press conference where McCarthy is alone on the podium, but I realize I am asking for too much.

Much to the chagrin of many Cowboys fans who have applauded the growth of Dak Prescott this year, McCarthy opted to not retain Jon Kitna on his staff.

Kitna has received a ton of praise in the last year for his work with Quarterback Dak Prescott, which led to a career year for the Cowboys signal-caller. So it comes as a bit of a surprise that Mike McCarthy wouldn’t want to retain a voice that was so instrumental to Prescott’s success in 2019.

However, this further supports the idea that Mike McCarthy has a vision for what he wants the Dallas Cowboys’ coaching staff to look like. Though Kitna did a really good job and will be missed because of his work with Prescott, the Cowboys’ quarterback will still be in the very capable hands of Kellen Moore and Mike McCarthy.

McCarthy has had a ton of success coaching the quarterback position whether as a QB coach, an offensive coordinator, or as a head coach operating as the play-caller.

Some consider it odd that McCarthy hasn’t even spoken to his new quarterback.

Mike McCarthy told Jane that he’s yet to speak to Prescott since taking the Cowboys job, likely due to being busy building his staff and getting acclimated to the new position. Still, new Panthers head coach Matt Rhule said he called Cam Newton prior to his introductory press conference, and Newton’s future in Carolina certainly feels more muddy than Prescott’s in Dallas.

While this likely means nothing, it’s still pretty weird that McCarthy didn’t make Prescott one of his first phone calls. The relationship between head coach and quarterback is always important, but even more so when the head coach is the designer of the offense and likely the play caller.

We saw how stale the relationship got between McCarthy and Aaron Rodgers in Green Bay, and while this is a different situation with a different quarterback, it’s still vital these two can connect professionally.

Will Mike McCarthy’s ‘super staff’ with the Dallas Cowboys really be all that super? – Tim Cowlishaw, Dallas Morning News

Early signs point to McCarthy doing a great job assembling his staff, but is it really something Cowboys fans should be excited about?

While the only real announcement has come courtesy of the Rams, that being that special teams coach John Fassel is on his way to Dallas, it has been reported that any number of former NFL head coaches are on their way to join McCarthy at the Star. This group includes defensive coordinator Mike Nolan, defensive line coach Jim Tomsula and offensive line coach Joe Philbin. Since McCarthy spent his season away from the game working with former Saints head coach Jim Haslett, it’s at least conceivable he will be added to the mix.

The question is whether this represents a true “super staff” or something that looks more like another installment of the good ol’ boy network. Let’s assume for argument’s sake this is some sort of dream staff that’s being assembled, a true blessing for a young, talented team that couldn’t win close games in 2019. While that would be a good thing for the Cowboys’ future, it would raise the rather obvious question of why this wasn’t done before.

More likely I think this is probably a solid staff of coaches, whether they are McCarthy’s old pals or not, and one not so different from what Jason Garrett had in place at various times during the lost decade. Did I say “lost decade?” I’m sorry, I meant last decade.

McCarthy may be the new coach, but expectations are high for him right out of the gate.

He’s inheriting a seasoned quarterback, a running back having gained more than a 1,000 yards in three of the past four seasons and winning the NFL rushing title in two of them and would have won a third if not for being suspended six games in 2017. He’s inheriting six Pro Bowlers (Amari Cooper and Jaylon Smith recent replacement additions, to go with Tyron Smith, Zack Martin, Travis Frederick and Ezekiel Elliott) and a team comprising a 56-40 record, with only one losing season over the past six years. So you know the score, and so does McCarthy.

It’s been an eventful week for new Cowboys coach Mike McCarthy and Nick Eatman had a chance to sit down and talk to him one-on-one.

The ninth head coach in franchise history has been focused on putting together his new staff and said the first days in the job have been centered more on his assistants than his actual roster. But in a 1-on-1 sitdown at Ford Center at The Star, McCarthy talked about a wide range of topics from building a culture, protecting the legacy in Dallas, what he expects from Kellen Moore and Dak Prescott and how a kid from Pittsburgh has gone from coaching Green Bay to now the Cowboys, creating quite an NFL journey.

Explaining Some of the Different Salary Cap Rules for 2020 – Jason Fitzgerald, Over the Cap

With the CBA expiring, the offseason may look a little different this year as it pertains to the salary cap. Over the Cap offers up some explanations, including one that is of particular interest to Cowboys fans.

2. Teams have Both a Franchise and Transition Tag at their Disposal

In a normal year a team can designate just one player either a Franchise or a Transition player. In 2020 they can designate both. So for a team like the Cowboys with a set of major free agents this is a very useful tool as it gives them the ability to, at the very, least match any offer received for two players. In a normal year a team like Dallas would franchise Dak Prescott which would leave Amari Cooper and Byron Jones free to find employment. Now only one of those two will be 100% free. It’s important to note, though, that you can’t use two Franchise tags or two Transition tags, it’s a one and one situation.