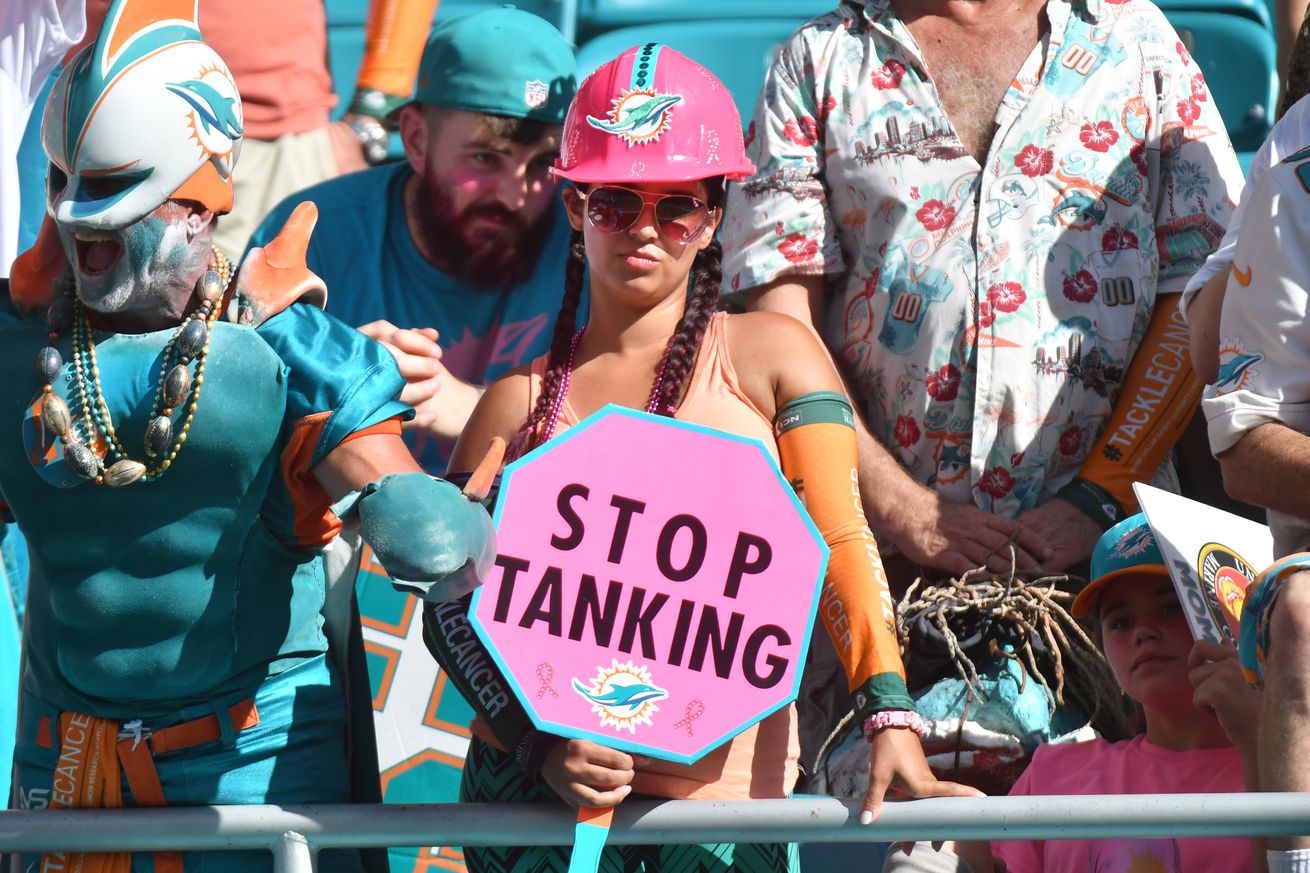 As I tell my classes, imagine the concept of a Draft in other walks of life. If you were the best lawyer/doctor/engineer in the country, you go to the worst community in the country for lawyers/doctors/engineers! But in sports, it is bargained and we don’t blink an eye. #Burrow

It really is odd that the NFL, like most North American sports, rewards the teams with the worst records with the best incoming players from the college ranks. Once, this meant the NFL rewarded incompetence; now it often means rewarding a team for purposefully losing.

Purposefully losing is also known as tanking and it’s become so ingrained in North American sports that fans frequently encourage their teams to lose. The Miami Dolphins were widely seen to be a team actively tanking in 2019 by trading away many of their best players in order to stockpile future draft picks. Unfortunately for the organization, the coaches and players on the roster possessed professional pride and integrity and had the gall to go out and compete each week and win five games.

Now, the NFL hasn’t seen widespread tanking like the NBA and MLB have seen. Recently, you could make the case that multiple MLB teams were more intent on positioning themselves for draft picks than winning games. This is horrible for both the league and fans. Sports are supposed to be about teams trying their best to win the game played on the field. When many teams aren’t really trying to do that, the integrity of the entire league can be compromised. Tanking is a problem in professional sports and something that needs to go away.

So, what can be done? Glad you asked because there is a solution.

Currently both the NBA and the NHL use lottery systems to assign the top X number of picks each season. This means that even if you finish with the worst record in the league, you have only a X percent chance of getting the top pick. The hope was this would eliminate tanking; it hasn’t. Teams have proven willing to tank just for an increased chance of landing the top pick.

Instead, what the NFL (and all leagues) should do is conduct a lottery for every spot in the first round of the draft. Now this isn’t a new idea, many have suggested it going back decades. The problem, of course, is it means a team that just won the Super Bowl could end up with the number one pick in the following draft and the team with the worst record could wind up with the final pick in the draft.

Now, part of me says who cares? Excellence shouldn’t be punished and ineptness shouldn’t be rewarded. But this system has a fundamental flaw. The same team could end up getting top draft picks many times in a few years while another team could end up getting low draft picks those same years. In short, there’s a very real possibility that one team will receive a significantly better group of draft picks over time than another team. We want an equitable system that treats every team the same.

The following draft capital comparison shows how that would help normalize the value of each team’s draft:

Using the current system, the team drafting first has over 4,000 points of draft capital while the team drafting last has barely over a thousand. While the changes proposed wouldn’t even the two teams out it would make it more fair than it is now. The difference in draft value is currently nearly 3,000 points; that number would be reduced to 1,800 points under this modified system.

That helps address the inherent unfairness of one individual draft. But how to insure any one team isn’t rewarded or punished more than others over multiple drafts? This is where the fun begins.

As noted above, each season draft picks would be awarded through a lottery. To stop teams from being rewarded more than others, a team would not be eligible to be slotted into the same spot until every team had been slotted into that spot over multiple drafts. You’re probably asking what that means.

What it means is each draft would be considered only one in a cycle of 32 drafts (32 being the number of teams in the NFL). If, let’s say, the Cowboys miraculously won the right to draft first in the 2020 draft, they wouldn’t be eligible for the first pick again for 31 more years (2052).

This system would guarantee that over 32 years every NFL team would be slotted at every spot in the first round. While it takes a while to achieve equity, over time every team would have the exact same draft capital.

It would also mean that each individual team’s possibilities will incrementally decline each year. Each team could end up with any of 32 spots the first year. The next year they would only have 31 possibilities and the following year only 30. By year 25 each team would be reduced to only 8 possible spots and finally, by year 32 there would be no need for a lottery at all as each team would be reduced to their one remaining spot.

Why this would be awesome

First, the obvious benefit of eliminating tanking. With draft picks no longer based upon team records, there’s no incentive for teams to purposefully lose. The obvious corollary is every team will now be playing to win. That’s supposed to be the point so that’s a good thing.

Second, as noted above, it’s completely fair. No team can claim the system is benefiting one team over another.

Third, the annual NFL Draft Lottery becomes another off-season event that allows fans to indulge their never-ending hunger for all things NFL. The event would be televised and you know fans would tune in in droves to find out where the team will be drafting next year.

You could have Rich Eisen or someone like that hosting and have NFL cheerleaders from the host city opening each draft spot. You’d start with the #32 pick and work your way up. Imagine reaching the #10 spot and your team hasn’t been picked yet; the tension for the remaining fans would be spectacular. This would be a made-for-TV event that would certainly rival the first round of the draft in terms of eyeballs.

The event could be tied into to other NFL events. Possible candidates:

You could modify that, make Thursday the draft lottery. There’s options available.

What are the problems with this approach

Needless to say, nothing’s perfect and there’s negatives to this solution. The two most obvious:

Any team who had such luck would already be prohibited from getting that exact same pick again; but they could also be prohibited from getting any top-five (or bottom-five) pick for the next five years. This would guarantee that picks at the top and bottom of the first round are spread out for each team over the entirety of the 32 year period. If five years is too many then make the moratorium three years. There are ways of prohibiting a team from simply having too much good or bad luck.

For instance, if the 2021 NFL Draft Lottery were held during the 2020 Draft, teams would already know where they will be picking a full year in advance of the draft. This would add more certainty about the value of such draft picks, both for the team surrendering and acquiring the pick.

If however, the lottery were held on Super Bowl week, for example, there would be less certainty. Not much less than now, but a bit less. Of course, you could play it forward and have the 2021 NFL Draft Lottery held during the 2020 Super Bowl. This would give teams even more lead time of knowing where they’ll be picking in the future.

The point is, the ability to trade or not trade picks is not really an issue and there are multiple ways of addressing it, depending whether you want more or less certainty.

That’s it. That’s how to eliminate tanking with 100% certainty, make the NFL draft completely fair to every team and create another exciting off-season event for the league to sell and fans to enjoy. There’s probably some dumb consequence I haven’t considered so I’m eager to hear your thoughts.