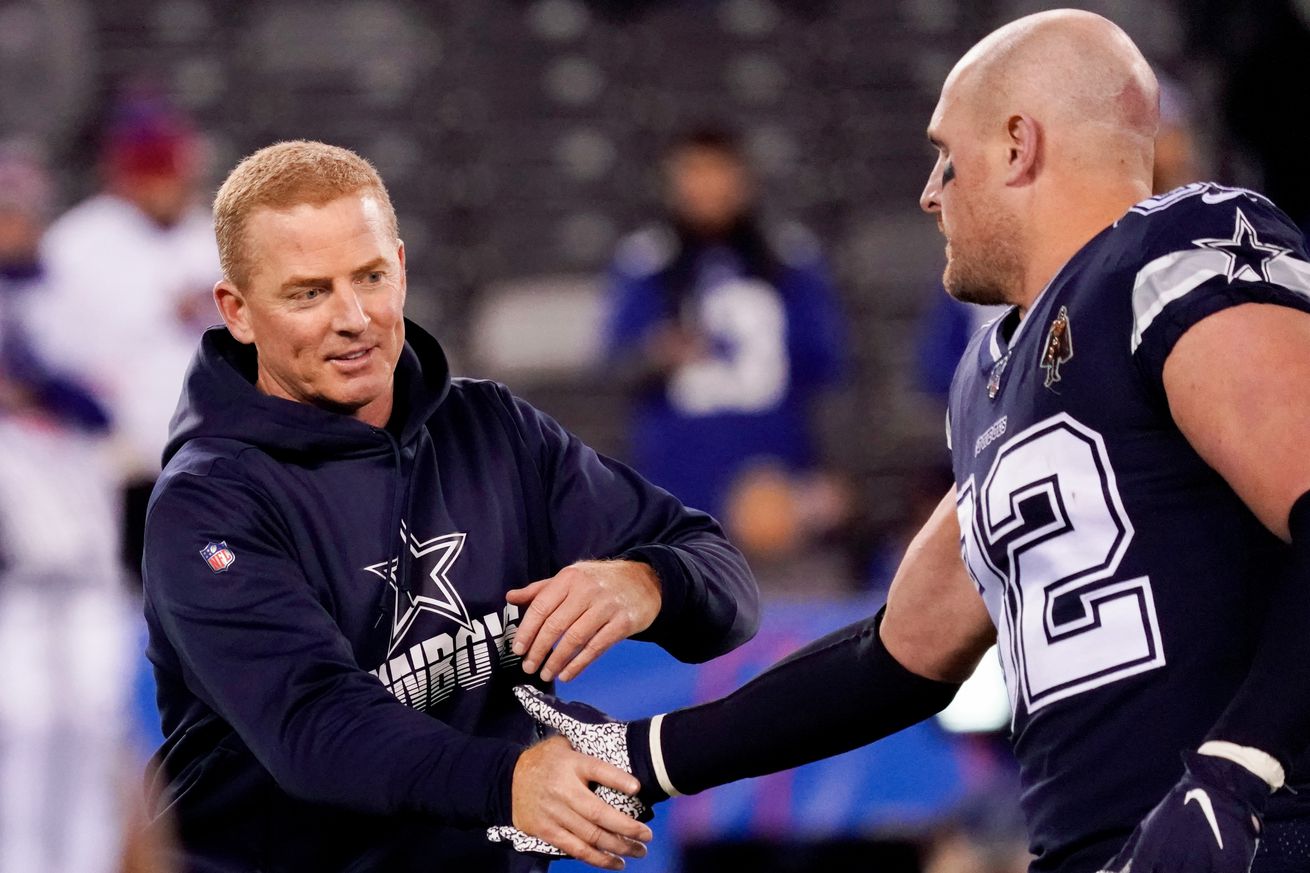 All of the latest Dallas Cowboys news.

Jason Garrett accepted the position as Giants offensive coordinator earlier this weekend. What are the possibilities that the former Cowboys head coach brings Jason Witten with him?

It would likely be, per Mortensen, as a player too.

The 37-year-old Witten will be a free agent this offseason after coming out of retirement for the 2019 season. If he continues playing, he could be a valuable asset for the Giants if they were able to convince him to leave the only franchise he’s ever known.

Witten would both add veteran leadership and a capable — and durable — option in the event that Engram gets injured again, which has been a theme for his three seasons in the NFL thus far.

With no on-field coaching spot on Mike McCarthy’s @dallascowboys staff, sources say Jason Witten hasn’t ruled out playing in ’20, and not to rule out reunion w new @Giants OC Jason Garrett. Of Witten’s 16 games, his most productive game was vs. Giants.

More on the Witten-to-New York rumors.

In the Giants’ case, Witten would be a complementary piece to Evan Engram, who was on pace for a career year in 2019 before suffering a season-ending foot injury. Engram had 44 receptions for 467 yards and three scores through eight games.

Engram has spoken highly of Witten as well, calling him one of the tight end “pioneers who changed the way the game is played,” per the New York Post’s Ryan Dunleavy: “Any time you are on the field playing with or against a guy who has set the standard at your position and is a Hall of Famer, you have to take advantage of seeing that any way you can.”

Considering he has spent 16 seasons with the Cowboys, seeing Witten in a Giants jersey would be a jarring sight at first.

It wouldn’t be an unprecedented move, though. Jerry Rice moved across San Francisco Bay to suit up for the Oakland Raiders, and Brett Favre played his final two years with the Minnesota Vikings.

Other than Witten, who else could follow Garrett to New York?

Perhaps the most gut-wrenching departure from the previous staff for Cowboys fans was offensive line coach Marc Colombo. As you are likely aware Colombo came up through the organization as a player, assistant, and ultimately was promoted to the team’s offensive line coach role midway through 2018 when the Cowboys fired Paul Alexander during their bye.

Players love Marc Colombo (he was one not too far in the rearview mirror after all) and he really helped get the Cowboys offensive line back on track. The state of that group in New York has been a bit in question in recent years so it makes sense that it would be a priority for Jason Garrett to start addressing.

It’s worth noting again that Colombo played for Jason Garrett so a large amount of his experience in the NFL has come while playing for and coaching under him. Perhaps this name makes the most sense if Garrett, and ultimately Joe Judge, do want Colombo in the Big Apple.

In other news, the Cowboys rewarding La’el Collins with an extension looks even better after the 2019 season the right tackle had.

Back in September, just before the start of the regular season, the Dallas Cowboys gave Right Tackle La’el Collins a five-year extension on his contract worth $50 million. It was a bit of a surprise at the time, but the Cowboys look like geniuses now after Collins’ strong performance in 2019.

We were in a different place as a Cowboys Nation when it came to Collins about a year ago. Even I wrote an article last February suggesting that La’el might be a salary cap casualty that offseason depending on what Dallas’ other roster needs were.

The Cowboys tried this in 2015 when they extended Crawford with a five-year, $45 million contract. They thought he would blossom as a 4-3 defensive tackle under Rod Marinelli and it never quite worked out. Tyrone’s contract has been arguably the worst on the team for the last few years now.

Thankfully, this leap of faith seems to be going well. La’el Collins is now one of your top players and playing for a steal compared to the NFL’s other premiere right tackles.

Dallas Cowboys: 3 things on offense and defense to get excited about – Terence Watson, The Landry Hat

What are some things to get excited about for the upcoming Cowboys season?

For too many years, the Dallas Cowboys secondary has failed to get interceptions instead celebrating the fact that they broke up passes. Next season you can expect to see a different secondary with the Cowboys corners and safeties looking to be more aggressive at the line of scrimmage and when the ball is in the air. That alone will give the Cowboys defense the ability to take themselves to the next level and give the offense more chances to put up points.

Robert Quinn could bolt in free agency, so who can the Cowboys target this spring to rush the quarterback?

Emmanuel Ogbah is a player Dallas had their eyes on back in the 2016 Draft. The 6-foot-4 275lbs defensive end hasn’t quite lived up to his potential, but only four seasons into his career, he can still develop into a good player.

In 10 games with the Chiefs last year, Ogbah had 6 tackles for loss, 11 QB hits, 4 hurries, 14 pressures, and 5.5 sacks. He’s a young player who will likely be fairly cheap. If Dallas signed to a modest deal to be rotational piece, he could be a bargain. Additionally, he would give them freedom to spend free agent money elsewhere, like DT.

Speaking of edge rushers, a profile on one of the best pass rushers in the draft class.

If not for the hype surrounding Chase Young, I’d bet we’d hear much more talk surrounding K’Lavon Chaisson’s name. While still developing his all-around game, Chaisson is a pro-ready prospect, with an extremely high ceiling due to the athletic and physical traits he brings to the table. If Robert Quinn is not retained by the Cowboys, drafting K’Lavon Chaisson would give them an excellent weak-side defensive end that can rush the passer, defend the run, and would be an excellent addition to Mike Nolan’s defense who is expected to incorporate some more creativity on the defensive side of the ball.

He expressed interest in learning about homeless shelters in the area, Schmitt said, and the economic landscape of certain public services in need. As McCarthy and his family settle into Dallas in the coming months and years, these are the sorts of conversations that people in Green Bay believe will naturally occur between McCarthy and North Texas community leaders.

“Mike McCarthy Way, I’ll weigh in on naming it that,” Schmitt said. “Not boulevard or street. With Mike McCarthy Way, there’s a double meaning to that. ‘Way’ is obviously a passage of a street or boulevard, but his way, he’s just like a Wisconsin guy. …He’s from Pittsburgh. His dad was a (police officer and) firefighter. He wasn’t the most polished. He was just a good, hard-working human being, a good dad. He’d make the pancakes for the kids.

“His way was, ‘Let’s everybody roll up our sleeves, and let’s work hard.’ That’s what Green Bay is. That’s like the Green Bay way. We don’t have any super high-tech things, but we get everything done. We get it done because we all work together. … I just really like his whole management style. I like the way he works. I like the way he acts.

”I think his way is the right way.”

The rumor about Jason Witten sure is something. We discussed it on the latest episode of The Ocho.