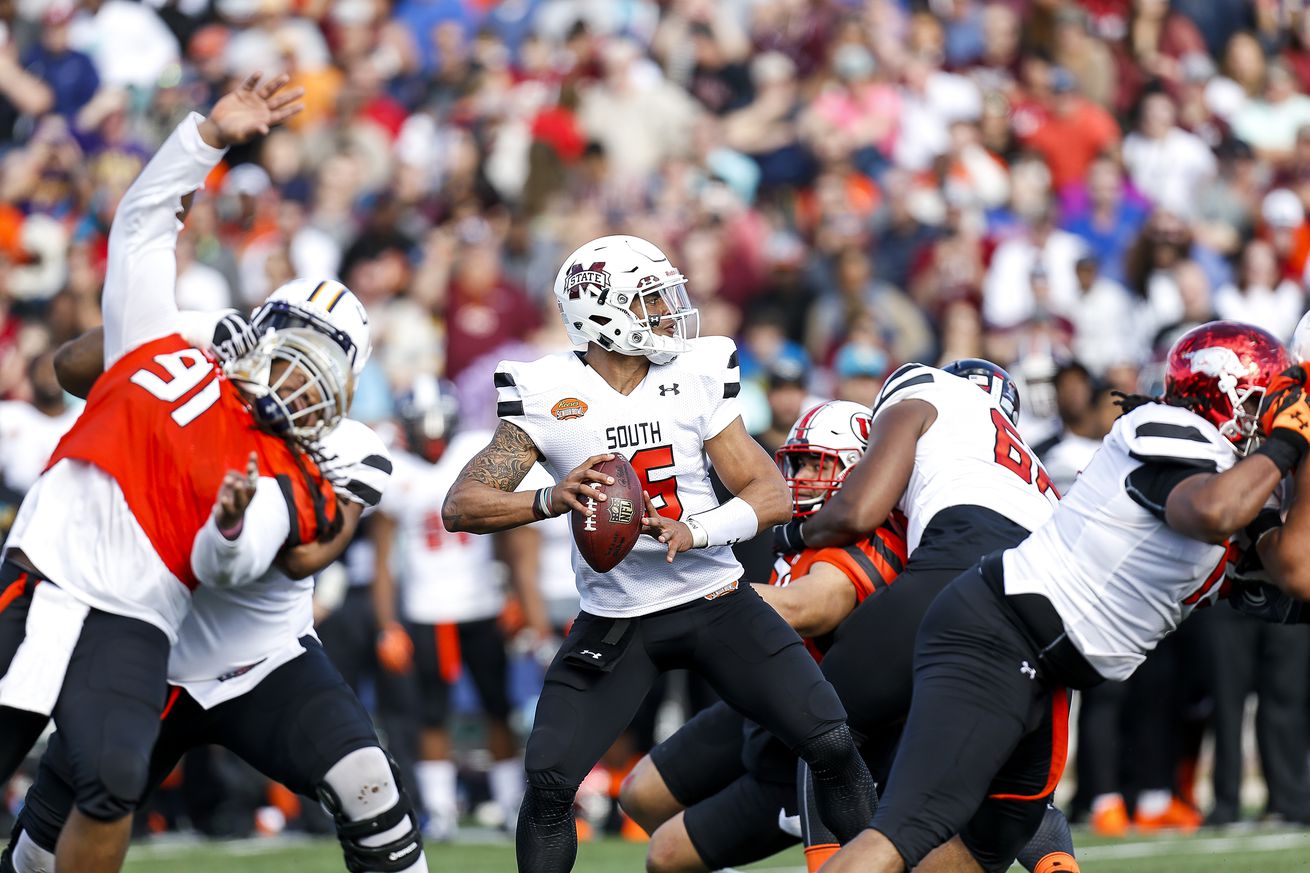 Who to know playing in the 2020 Reese’s Senior Bowl.

Some of the best talent on the Dallas Cowboys roster has come out of Mobile, Alabama in the Reese’s Senior Bowl. From Dak Prescott, to Michael Gallup, to Zack Martin, many of the young core players spent a week in Mobile preparing for the NFL Draft.

In 2020, there’s a new pool of some of the best seniors in the country, working towards hearing their name called on draft night. Today we will preview some of the best names to know for the Cowboys at each position in Mobile.

With a few of the top quarterbacks in this class down in Mobile, it’s unlikely the Cowboys will have a strong eye on the quarterbacks this year. But there are a handful of mid-to-later round guys who may be of interest to the team. Jalen Hurts is the biggest name in Mobile, not expected to go in the first round. Hurts likely has the most to prove this week in practice as he’ll need to show he can be successful throwing the football outside of Lincoln Riley’s offensive structure. Anthony Gordon out of Washington State would be the other name to know that could fit the Cowboys needs at backup quarterback, while also not likely going inside the top 100. With Justin Herbert, Jordan Love, and Jalen Hurts taking up most of the coverage, it’ll be nice to see how Gordon performs in the second tier of QB’s here.

Similar to the quarterback back position, it’s tough to imagine the Cowboys spending a high draft pick on a running back with Ezekiel Elliott and Tony Pollard carrying the load in Dallas. But like the quarterbacks, there’s enough later round talent here where it’d be worth the Cowboys taking a flier if the opportunity presents itself. Antonio Gibson, out of Tony Pollard’s alma mater Memphis, is a name to watch. Gibson, similar to Pollard, is coming out of school with very little production due to playing behind Darrell Henderson and Pollard for most of his career, but don’t let the low production scare you off. Gibson is a very solid back with plenty to offer in the passing game as well. Gibson likely is a day three back, and offers plenty of special teams, receiving, and running abilities to intrigue the Cowboys if available late on day three.

Unlike the quarterback and running back positions, the wide receiver class in Mobile is right up the Cowboys alley. While there may not be any first-round receivers in Mobile, there are going to be a ton of guys drafted on day two and three who will be participating this week. Michael Pittman Jr. out of USC, and KJ Hill out of Ohio State are two of the more intriguing players here that fit the Cowboys needs at receiver. Pittman Jr., brings impressive size, athleticism, and big play ability to the table with his 6’4” 220 lb frame. KJ Hill is the exact opposite in terms of size, but still offers the big play ability due to his elusiveness, speed, and quickness with the ball in his hands. Alongside these two, Devin Duvernay, Van Jefferson, Quartney Davis, Antonio Gandy-Golden would also be names to get familiar with due to these similar traits.

What was lacking in the QB and RB department was certainly made up for in the WR and TE class. Like the wide receiver class, the tight end class has a ton of talent in Mobile that will likely go in the first two days. Brycen Hopkins and Jared Pinkney are two of the best tight ends in Mobile that bring similar skill sets to the table. Hopkins, a 6’5” 245 lb TE, brings more of a traditional feel to the table with his ability to both block and catch the football. Pinkney is very similar, but adds a bit more upside to the table due to his physical attributes and ability to make plays on the ball above the rim. Listed at 6’4” 260 lbs, Pinkney is a massive man at the TE position but moves relatively well for a thicker built tight end. Along with Bryant and Pickney, Harrison Bryant out of Florida Atlantic, and Adam Trautman out of Dayton, are two other names from smaller schools that could bolster their draft stock with big weeks in Mobile.

While there is some top end talent along the offensive line in Mobile, the Cowboys can’t afford to continue to invest top 100 picks in the offensive line but there are some names to know for late on day two and day three. Alex Taylor out of South Carolina State is a 6’9” 310 lb offensive tackle with intriguing size, length, and athleticism for the position. Matt Peart out of UConn is another name to keep an eye on. Peart is from Jamaica and is still very new to the game of football. With that said, 6’7” 303 lb offensive lineman don’t grow on trees, especially ones that have shown the ability to develop like Peart has at Connecticut. Peart, a better run defender than pass protector, has all the traits to develop into a very nice player at the next level if he continues on the path he’s on. Ben Bartch, a Division III offensive tackle out of Saint John’s plays with tremendous athleticism and dominated in pass protection. Bartch, a 6’6” 305 lb tackle, was a former tight end which explains the athletic traits he brings to the table as an offensive tackle. Though the Cowboys currently have two excellent starters on both sides of their line, taking a look at Bartch, Peart, and Taylor would be a nice day three pick for a developmental swing tackle.

We will turn to the defensive side of the ball next, to see some of the top defensive talent in Mobile, and participating in the 2020 Reese’s Senior Bowl. Be sure to stay locked in all week as we’ll be covering the event on site for the entire week.