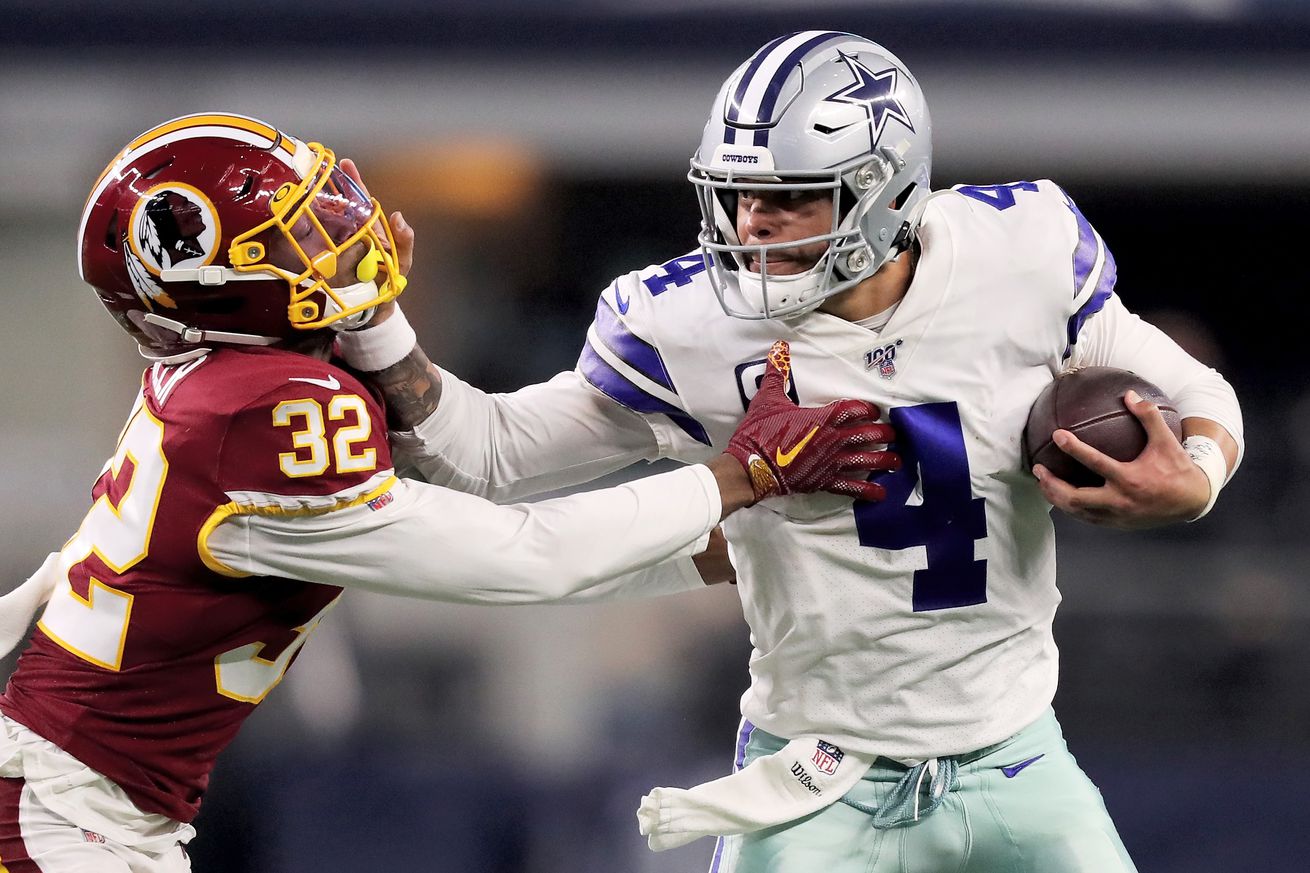 Plus, a free agency rumor already pops up.

Dak Prescott still doesn’t have a contract in place and recent whispers out of The Star have indicated that the Cowboys are moving towards a franchise tag for their star quarterback. However this gets resolved, all eyes are on Dallas, as per usual.

It’s looking more likely that Dallas will use the franchise tag on Prescott, keeping him under contract for another year while the sides negotiate a long-term contract. The franchise tag number is going to be roughly $27 million, which could cause Prescott to hold out because it’s considerably less than what he could make annually under a long-term deal.

With the salary cap, Jerry Jones can’t keep everyone. He’ll have some tough juggling to do to make all of this work.

Whether Dak Prescott gets franchise tagged or signs a long-term deal, the Cowboys will be paying him a lot of money in 2020. It’s got to be good news, then, that the quarterback has the fifth best odds to win MVP next year.

Dak Prescott found himself right in the middle of MVP talks midway through the 2019 season, especially after what may have been the best performance of his career at Detroit. Prescott’s play hit a bit of a valley after that peak, however, as he struggled against New England and Buffalo the following weeks.

While the Cowboys faded down the stretch, teams like the Ravens and Chiefs took off, leaving Prescott in the dust.

Still, 2019 was the best year of Prescott’s young career thus far. He’s shown steady improvement over the past two seasons, and could potentially take another step forward under Mike McCarthy and Kellen Moore.

Whether or not Prescott can maintain MVP level play for an entire 16 games is yet to be seen, but Vegas seems to believe the Cowboys have found their guy. And he’ll be expected to play up to the lofty expectations his price tag will bring in 2020.

Like a broken record, it’s easy to say that the Cowboys have a need at safety this offseason. But a rumor on Tuesday linked the Cowboys to one potential free agent at the position who they expressed interest in last year.

As mentioned, Berry visited The Star in March 2019 but left without putting pen to paper. He also drew team-reported interest from the Cleveland Browns before opting to sit out the entire regular season, with an eye on returning in 2020.

Formerly considered one of, if not the best safety in the league, Berry has played just three games since 2016, hampered by a devastating Achilles’ tendon rupture which devolved into a heel issue known as Haglund’s deformity; Garafolo has described it as “a bone spur that basically digs into the Achilles.” The Cowboys, or any potential suitor, would need to put him through a medical gauntlet prior to opening the checkbook.

Assuming he’s cleared and Dallas gets him under contract, however, Berry could step into an immediate starting role. Incumbent Jeff Heath is headed to, and likely leaving via, unrestricted free agency, and owner Jerry Jones flat-out admitted last season that upgrading opposite Xavier Woods is a major priority. (The team attempted to trade for Jamal Adams last October, but talks died after the New York Jets demanded too much in return.)

Dak Prescott rightfully gets all the attention over his contract, but Amari Cooper is in an equally precarious position. Jonah Tuls of The Draft Network broke down several different arguments for and against re-signing Cooper.

If I were the general manager of the Cowboys, I would prioritize [Byron] Jones over Cooper in long-term negotiations. The position in today’s NFL is more replaceable than a starting outside cornerback. We started to see it with last year’s receiver class, as several picks outside the first round proved to be impact players right away. Rather than paying Cooper top wide receiver money, I will take my chances drafting from this 2020 pool of prospects if it means keeping Jones on the roster.

Without Jones, the Cowboys are left barren in the secondary. Anthony Brown is unlikely to return as an unrestricted free agent, and underwhelming cornerbacks Chidobe Awuzie and Jourdan Lewis will hit the open market next offseason. Without Cooper, the Cowboys have Gallup, Randall Cobb and likely an early-round draft pick from this 2020 class on the receiving depth chart.

Contrary to my opinion, I fully believe the Cowboys will do whatever they can to re-sign Cooper to a long-term extension. I think the gameplan in Dallas is to franchise Prescott, give Cooper top pass-catcher money and let Jones walk.

The Cowboys are very clearly in win-now mode, and the hiring of Mike McCarthy emphasizes that. And with the 49ers losing the Super Bowl, it highlights just how wide open the window to win now might be in the NFC.

Dallas hasn’t gotten it done. But the regular-season record shows it belongs in the conversation. A new coach in Mike McCarthy with a new approach could provide the spark this group has lacked to get over the playoff hump.

That’s why Jerry Jones reluctantly moved on from Jason Garrett. Some good things happened under Garrett’s watch, a fact many fans are loathe to acknowledge. But Dallas never advanced past the divisional round and never made the playoffs in back-to-back seasons.

No team has established supremacy in the NFC. That works to the Cowboys’ advantage. But Dallas must walk through that revolving door before it shuts. San Francisco? Expand that sample size to eight seasons, and the 49ers have been to the Super Bowl twice.

Skip Peete is both the new and old face in the running backs room for this new coaching staff, and while he’s never worked with Ezekiel Elliott or Tony Pollard, he’s seen them from afar and been impressed with what he’s seen.

Peete and the Cowboys’ offensive staff – largely a new group under head coach Mike McCarthy with the exception of holdover assistants Kellen Moore and Doug Nussmeier – have yet to dive into personnel evaluations this offseason. But Elliott’s credentials as a featured back are well known league wide.

”Obviously I saw him up close when we played here in December. Very explosive, talented player, exciting to watch,” Peete said. “I’m excited to have an opportunity to work with him. It should be a lot of fun.”

Peete has coached Pro Bowl caliber backs at each of his NFL stops: Barber and Murray in Dallas and Oakland’s Charlie Garner in the early 2000s – a stretch that included a Super Bowl appearance by the Raiders in 2002.

People are arguing about Dak Prescott. We discuss on The Ocho.