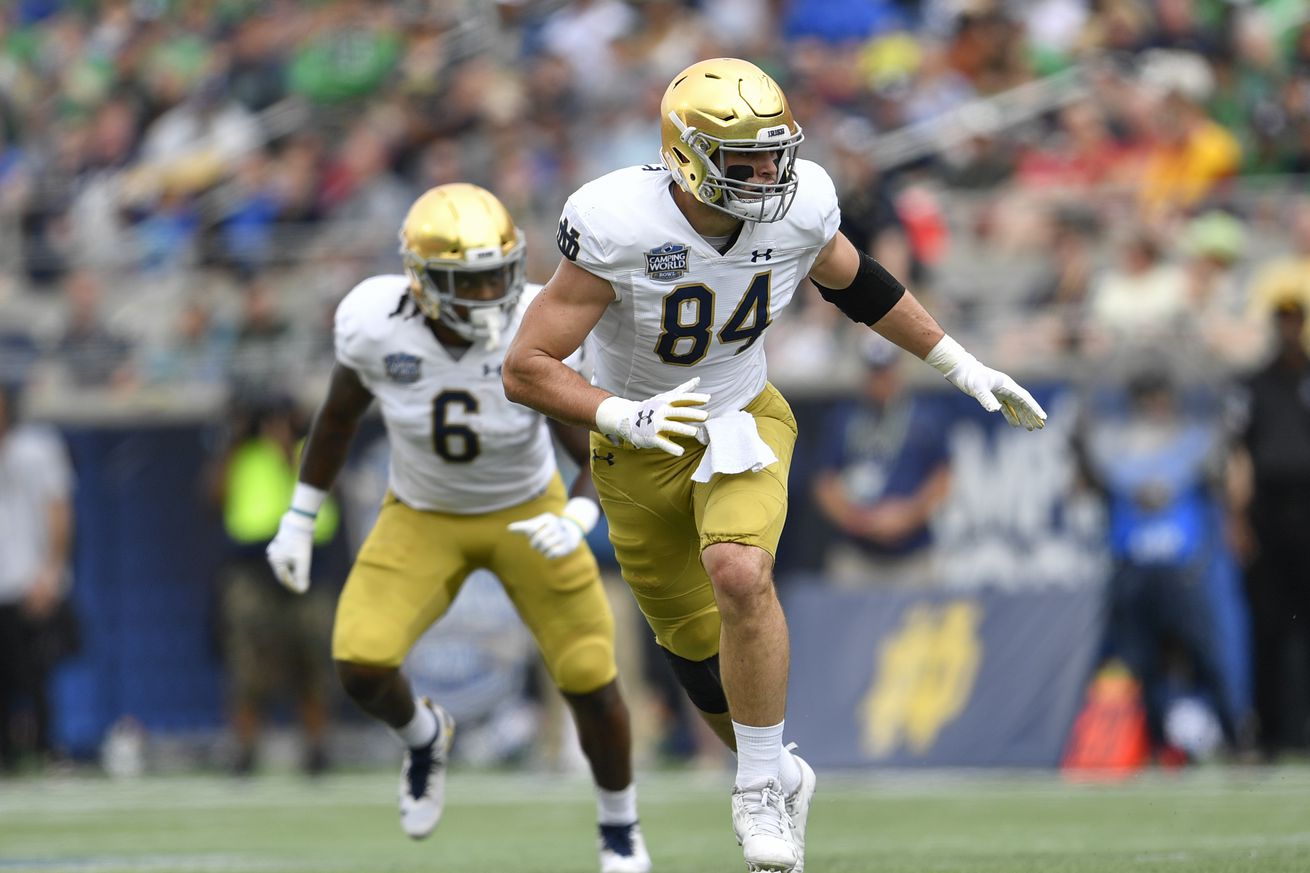 The Cowboys should think about snagging a tight end in this year’s draft.

Today, we look to find the Cowboys a tight end, it’s a big need for the organization. The Cowboys have an over-the-hill Jason Witten that will be wearing a gold jacket in a few years but is a free agent and could end up somewhere else. Blake Jarwin has shown that he can make plays when given an opportunity but those opportunities rarely come. Dalton Schultz hasn’t been much of a producer in his short career. Truth be told, the Cowboys lack a real presence at the tight end position but it’s something that can really improve an offense’s production. Mike McCarthy may want to add one to this offense going forward, so let’s have a look at this year’s class.

Kmet has the look of an NFL tight end, he’s very long and muscular. He is also one of the more polished tight end prospects, in terms of having a blended skill set and being able to handle in-line duties. The only issue with Kmet is trust in his hands, he lets way too many footballs hit his body and needs to be more trusting of his hands. Overall, he isn’t the most athletic prospect but he’s more consistent than most prospects and has a balanced game.

Hopkins is a big-time playmaker on the field and is a receiver’s tight end in that aspect. He’s very fluid and is more advanced as a route running tight end. If the Cowboys are looking for a dynamic playmaker vertically, Hopkins would be their guy. Hopkins has issues staying engaged when the ball is not coming his way, he’s also got a lot to learn in leverage blocking. For as good as he is between the 20’s, he tends to disappear in the red zone. There are things to work on but Hopkins is an explosive receiving tight end, which will get him on the field early.

Another great play-making tight end that stretched defenses vertically at Washington, Bryant is a dynamic pass-catcher. Bryant is a chess piece that will make a good mismatch option for any offense. He has a ton of technical work ahead before he can be trusted as an in-line blocker though he’s pretty good blocking on the move. Bryant needs to add some bulk because he is not nearly as physical at the catch-point either.

Pinkney will be an attractive prospect to team that need a more functional blocker with pass-catching abilities. Pinkney does a great job of holding up at the point of attack, he can come out of his stance well and shoot downfield in the passing game. He’s not the most agile athlete and he does have some clunky footwork issues to work out. However, Pinkney is a great red zone threat and can box out defenders at the catch-point.

Moss is a big-framed target that plays with physicality and is just a load for defenders to deal with. He’s very savvy at finding soft spots in the coverage and making the catch. Moss doesn’t have the speed but he does have the power. There is a bit of stiffness in his routes and he will need to learn to be a better salesman but Moss is a playmaker in the making at the tight end position.

Breeland has good length and long speed, he will get downfield in a hurry. He makes good plays in the passing game and knows how to manipulate zone coverage. Breeland is not the strongest at point-of-attack blocking and he lacks explosion in his lower half. However, his large catch radius and abilities after the catch will be his calling card.

Bryant is one of the best targets for any team looking for more receiving production in their offense. He uses his length really well, he has great athleticism and long speed to really scoot downfield. In the NFL, he will be a big-time receiving threat but he has so much to learn in terms of blocking, His technique at the line is poor and he’s just very underdeveloped in that area though he’s a dynamic pass-catcher.

Trautman is racing up the draft boards after his Senior Bowl performance. Like Harrison Bryant, Trautman has the length and knows how to use it. He’s very agile and has been successful in stretching the field as a receiver. He has a very blended skill set and might have the best upside of any tight end in the class. He’s just very raw and must learn how to win with technique over athleticism at the pro-level.