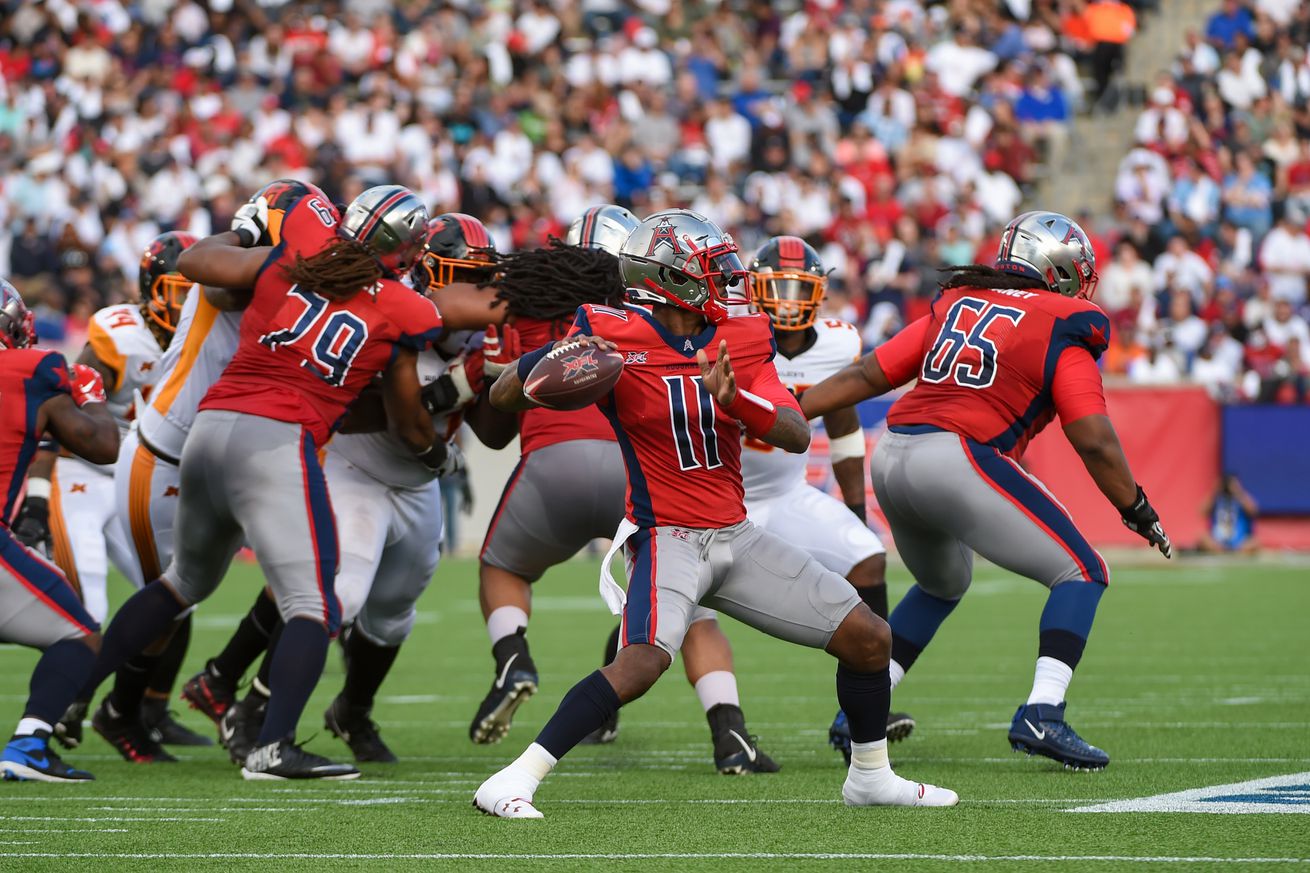 The XFL made its return this past weekend and there are a lot of things to take away from it. This is the second straight spring season that we have seen a league try to serve as a feeder system of sorts for the NFL. A year ago the Alliance of American Football gave it their best shot. Unfortunately, the league folded before the first season even finished.

The XFL knows a thing or two about folding a league as it literally did so at the beginning of this century (almost said millennium which would have been correct but felt super strong!). It has returned with the knowledge of how to avoid its own, and the AAF’s, mistakes and the product that we saw was good. It’s not unfair to believe that this could finally be the spring league that could succeed.

We’ve seen the NFL take ideas and principles from the original XFL and AAF and integrate them into their own games. Many people are thinking that the NFL might adopt the next XFL’s version of kickoffs, but that remains to be seen. It would be great for the NFL to copy the XFL’s replay review process.

As there was football on our television screens over the weekend that means that there are football players that played games. The Cowboys are getting set for the NFL Combine and will soon be diving into free agency before the draft, but they should keep their eyes on some XFL players while they’re at it. Here are five names to pay attention to as the season continues to unfold.

He is the son of Ricky Proehl if you were wondering, but he has a lot that you need to know about his own game, too.

Austin Proehl pulled in the first ever #XFL TD…and then a second pic.twitter.com/QQdKm2m5Si

Proehl stole headlines by scoring twice in the first game of the new XFL, one of which came from 57 yards out.

We have no idea what the Cowboys are going to look like at wide receiver as the Amari Cooper situation seems to be one that they are still figuring out. Still though, having a guy like Austin Proehl at the very least in Oxnard couldn’t hurt.

Devin Smith truthers are obviously hurt by this, though.

There are plenty of people that want to see the Cowboys draft a receiver, but if they’re able to find help in the XFL maybe they can free those resources up for something else. Just look at how Greg Ward Jr. was able to be serviceable for the Philadelphia Eagles in 2019 after playing for the AAF’s San Antonio Commanders.

If Austin Proehl doesn’t fit your style, then maybe Eli Rogers will. Rogers has NFL experience, most notably with the Pittsburgh Steelers, and they have quite the reputation for finding wideouts.

That TD set up by a big play by Cardale Jones to Eli Rogers for 27 yards pic.twitter.com/O2fFItnjYV

A lot of the way we’ll look at the Cowboys receiving position will change if and when Amari Cooper ultimately does sign an extension with the team. For now, we can only prepare for everything.

The Dallas Cowboys have a starting quarterback in Dak Prescott, but behind him options are fairly slim.

Cooper Rush remains someone who the Cowboys can return for 2020, but do you really have a high level of confidence in him as a backup? PJ Walker stole the show in the opening weekend of the XFL, there are likely going to be some people who give him a call.

James Butler gets the 20 yard TD to make the score:

Walker seems to have a versatile skillset and at the very least that is worth checking out. Maybe Mike McCarthy has a plan at backup quarterback, maybe he doesn’t.

Hopefully he does, though.

Sometimes there are players that are talented enough to play multiple positions. That is definitely the case with Tampa Bay’s Quinton Flowers.

Quinton s is in and providing a spark for the @XFLVipers

It’s hard to figure out exactly where the Cowboys (or any NFL team) might have room for Flowers but he showed on Sunday that there are a lot of athletic qualities to his game that a football team can certainly use.

Brett Maher took a lot of heat last season, but the other “kicker” on the Cowboys roster didn’t exactly play well.

Chris Jones has seen some strong days as the punter in Dallas but they appear to be well in the rearview mirror. On Sunday, there was a punter not too far from AT&T Stadium that could be someone the Cowboys consider paying some attention to – Marquette King.

Marquette King with a perfect punt, ruined by Steve Beauharnais and Pat McAfee LOSES it pic.twitter.com/srJBGV0pBQ

King had a brief run with the Oakland Raiders where he made himself known due to his on-field successes and antics in celebration. John Fassel is the new Cowboys special teams coordinator and if he feels that he can turn King into something special then so be it.