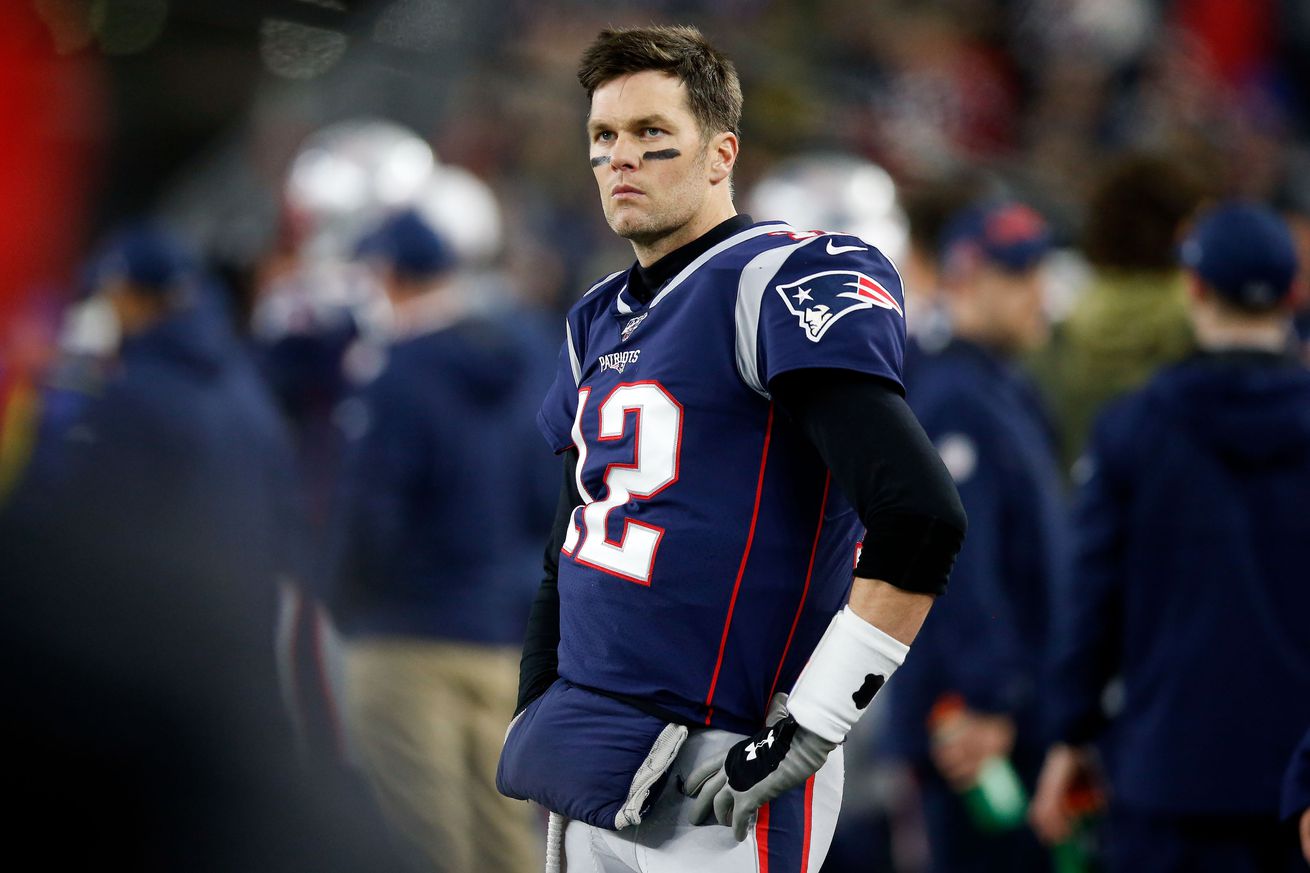 Plus, more on some veterans who Dallas may be looking to retain this offseason.

Another perspective on the ongoing Tom Brady to Dallas rumors.

From those who have already entered this discussion, I’m surprised at the number of people who side with Brady as the better option. Take the money and the contracts out of the equation and pretend it’s no more than a choice, a quarterback competition staged at Oxnard (although that’s not what would happen in reality).

I’m acutely aware of Brady’s accomplishments and the fact he won a Super Bowl at 41 and had a team rolling along at 11-0 last year as a 42-year-old. Some folks believe that means Brady’s not really in decline although the numbers and, yes, the eyeballs say he clearly is doing exactly that.

In basic passer rating numbers, Prescott finished far ahead of Brady in 2019. In the more sophisticated Next Gen Stats world, Prescott did likewise. Dak finished third in average completion distance (7.6 yards). Tom checked down and checked in at 24th, at 5.6. In terms of throwing the ball into tight windows — aggressiveness percentage — Dak was 14th and Tom was 26th.

Now, there’s a real argument on Brady’s side regarding his offensive surroundings. Although Josh McDaniels is as creative as coordinators get, Julian Edelman crossing routes are pretty much the driving force of the New England offense in the post-Gronk era. There’s little doubt Prescott has better offensive personnel around him, so that would theoretically enhance Brady’s numbers in Dallas.

The Dallas Cowboys should bring LB Sean Lee back in 2020 -Clarence Hill, Fort Worth Star-Telegram

Bringing back the veteran linebacker could be a big addition for the Dallas defense.

Considering Lee’s play in 2019 and the uncertainty surrounding weakside linebacker Leigton Vander Esch’s condition, despite optimistic expectations of his recovery from neck surgery, there shouldn’t be anything to decide. Bring him back.

Lee, known to be injury prone since he was picked in the second round in 2010, played in a career-high 16 games for the first time in his career in 2019. He played in more than 58 percent of the defensive snaps in 10 of the last 11 games and recorded a season-high 17 tackles in the second to last game of the season.

His presence and production was necessary because of Vander Esch played in only nine games due to a neck stinger and was sidelined for the final six. Vander Esch underwent a minimally invasive neck surgery after the season and is expected to be ready to go for the start of the off-season program.

But he also suffers from spinal stenosis. And while the Cowboys are fitting him with special equipment to restrict his neck movement — and all confident he will be okay to play in 2020 and beyond — he could be sidelined for good with the wrong hit.

Deep Dive into the Dallas Cowboys 2020 Salary Cap- John Williams, Inside The Star

A look at how the Cowboys stack up salary cap wise heading into free agency.

Getting players on an existing contract to take a pay reduction isn’t something that happens very often. The Cowboys were able to talk Brandon Carr into a pay cut a few years back and there were rumors that Dez Bryant was willing to take a reduction to stay with the team, but the Cowboys opted to move on. Generally, players are asked to take a pay cut or get released and inevitably, the player refuses and released.

It has already been reported that Defensive Lineman Tyrone Crawford is willing to take a pay cut in order to stay with the only NFL team he’s known. Crawford, who is set to make $9.1 million is also a popular “cap casualty” option as the Cowboys could save $8 million if they were to release him this offseason.

Though a reduction may not provide the same cap savings as an outright release might, the benefit for the Cowboys is that they can still have the player on the roster. Tyrone Crawford is unlikely to be a 10 sack guy for the Cowboys in the future, but his flexibility and leadership are valuable commodities. Especially for a defensive coordinator like Mike Nolan who wants to use multiple fronts. Crawford can play as both a 3-4 and 4-3 defensive end as well as a 4-3 3-technique defensive tackle for the Cowboys.

Another veteran who could be looking at a return to Dallas this offseason.

While many figure that Jones will be a goner (he will be one of the top corners available), Cobb is certainly an interesting candidate. The Cowboys actually will have quite a bit of cap room to use in free agency, but, obviously, a lot of that will go toward hammering out new deals for Prescott and Cooper. But there could still be some room for Cobb.

Cobb signed a one-year, $5 million deal with Dallas last offseason and ended up having a very nice bounce-back year, catching 55 passes for 828 yards and three touchdowns after playing in just nine games in 2018 due to concussions. Those were also Cobb’s best numbers since 2015.

Keep this in mind: Mike McCarthy, who coached Cobb from 2011 through the latter stages of 2018 with the Green Bay Packers, is now the Cowboys’ new head coach, so that could provide some extra incentive for Cobb to return.

Everything you need to know Cowboys heading into the next month.

Never A Doubt: So Sean Lee and his people say he still wants to play in 2020. Did you ever have a doubt? Come on, he’s Sean Lee. He’ll only turn 34 on July 22. He was able to play all 16 games in 2019 for the first time in his 10-year career, which was the most since 15 in 2016. That’s just two short of his previous two-year combined total. He was able to start 13 games, and once Leighton Vander Esch suffered his neck injury, played at least 46 snaps in the eight games Vander Esch either didn’t start or finish. And his 109 tackles were second most for the Cowboys. Sure, he wants to play, and from the Cowboys standpoint, they need him to play – for them.

Plus, remember, after being healthy enough to play only seven games in 2018, he reduced the final year of his contract $4 million. If nothing else, Lee sure seems like a valuable insurance policy for the Cowboys against Vander Esch successfully returning from his neck surgery and the Cowboys finding a better replacement on the strong side.

Triple Crown: That would be of contracts, if the Cowboys could sign Dak to a long-term deal before March 10, then, if they wanted and needed to, could franchise wide receiver Amari Cooper and use the transition tag on Byron Jones to reserve their rights of first refusal, affording them additional time to continue working on those long-term deals.

The franchise/transition tag for a wide receiver is projected to be $18.5 million/$16 million and for a cornerback it’s $16.5 million/$14.5 million. Again, if indeed that’s the way the Cowboys want to go. Just a thought. But an expensive one at that, since long-term deals with signing bonuses enables accounting to spread the signing bonus over the length of the deal for cap purposes.

Will Dallas address the cornerback spot by selecting one in the first round?

Picks 15-32 in the draft are often where you see this dynamic most prominently. It’s a range of picks that successful NFL teams have to get right, but it’s usually void of the few no-brainers that are available at the very top of the draft. If you’re a head coach, you don’t draft a player at No. 17 unless you know he’ll be successful under you.

A high majority of expert mock drafts predict the Cowboys will draft a defensive back in the first round. If safety Jeff Heath and cornerback Byron Jones end up elsewhere in free agency, the chances of this prediction ringing true only increase. Along those same lines of thinking, head coach Mike McCarthy’s Packers drafted three first-round defensive backs in his final five seasons in Green Bay.

In 2014, the Packers drafted Ha Ha Clinton-Dix out of Alabama with the 21st overall pick. Clinton-Dix was a Pro-Bowler with the Packers by 2016. Another Alabama safety, Xavier McKinney, is considered by some to be a great first-round fit for Dallas in the upcoming draft.

The next season, McCarthy and the Packers drafted another safety, Damarious Randall, out of Arizona State with the 23rd overall pick and converted him to cornerback. He started 30 games for Green Bay before being traded to Cleveland in 2018.

It’s a throwback Thursday episode of The Ocho! Check out our August interview with Tony Romo.