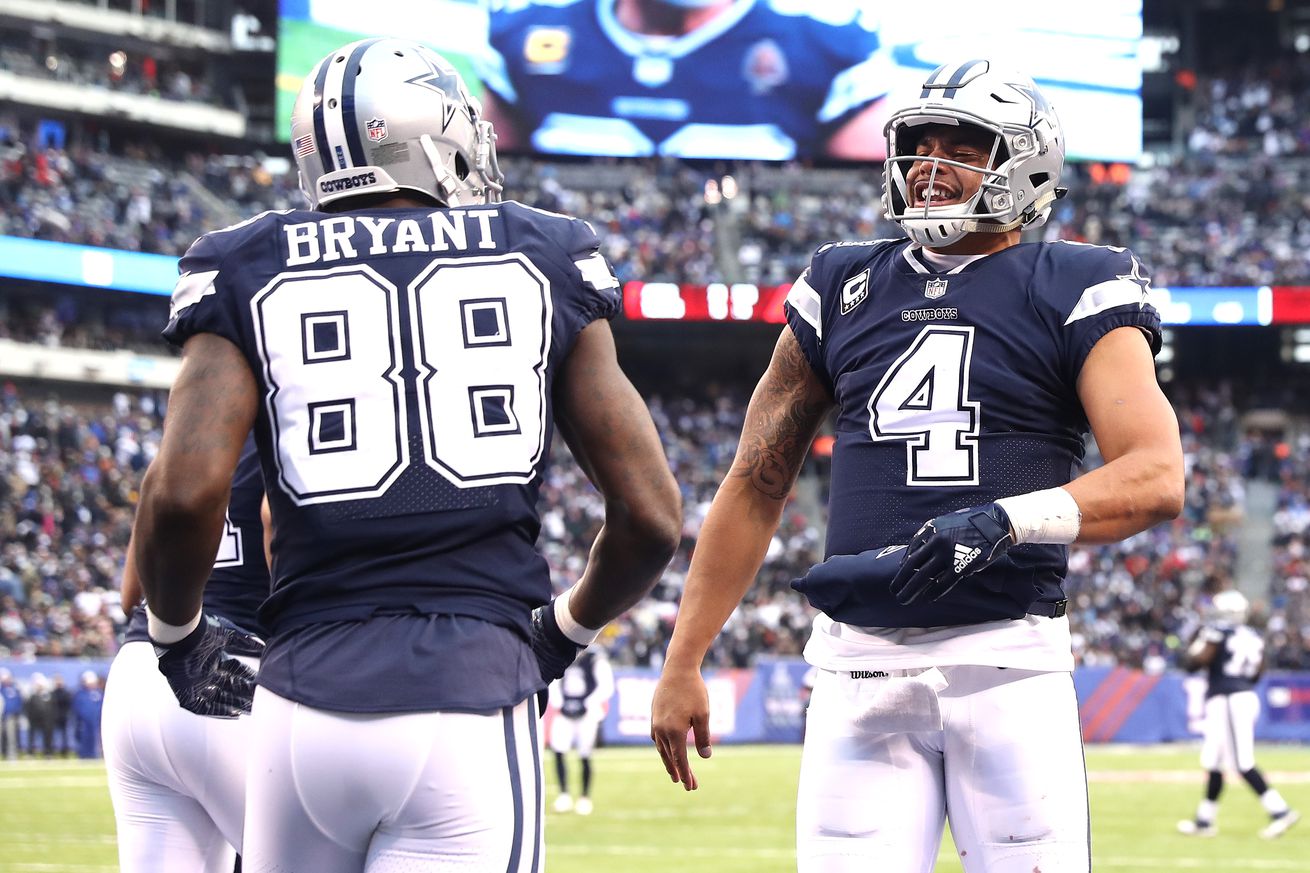 Yeah, I’m kinda down for this. | Photo by Elsa/Getty Images

Let’s recap and look ahead all at one about the Cowboys offseason.

There is not a lot of hard news about the Dallas Cowboys or the NFL for that matter. It’s just that time of year. In plentiful supply, however, are speculation and possibilities. Here are some of the more interesting things going on out there.

Get some guys signed already

OK, free agency is coming fast, officially starting on March 18th, with legal tampering a couple of days before that and not so legal tampering already well under way. More importantly, the deadline for tagging players is March 10th, just a bit over two weeks away. And now there is the possibility that the new CBA could be done before then, which would mean that things could revert back to the Cowboys only having one tag to use – with multiple players that tagging might be helpful for.

Jerry and Stephen Jones often operate under the principle that deadlines make deals. That is OK, I guess, when you are working on one contract. But this offseason, things have transpired so that they face a need to decide what to do with Dak Prescott, Amari Cooper, Byron Jones, Robert Quinn, and more of their own free agents. While the four listed are the big ones to consider, there are also some not insignificant lower cost signings of their own free agents that should be sorted out before they hit the open market, like long snapper L.P. Ladouceur and kicker Kai Forbath. This involves not only getting the players they want back in the fold, but making decisions on who to let test the free agent waters.

All eyes are on the Prescott negotiations right now. It is going to be a huge deal, because it is for the franchise quarterback. The actual terms will dictate what they have left in cap space to sign the rest, with a domino effect. Frankly, they need to get Cooper done before the deadlines come as well.

There is still time, but it seems very risky to let things drag out too much and wind up having to either rush things through on other players or find yourself in a bidding war with other teams. That could just drive the price up.

This is a case where the Jones family may have let things pile up to their detriment. It is entirely possible that all of the key internal free agents may want to go on the market to make as much as they can, despite any inclinations to remain in Dallas.

The best thing to do is bite the bullet on Prescott and Cooper and pay them. They are the most important pieces involved for Mike McCarthy’s offense. Once those two are done, then the team will know what it has to work with and where the priorities are in free agency and the draft. But going into free agency with either of those two unsigned is a risk they don’t need to be taking – if the players will play ball with them.

Don’t get fooled by the NFL propaganda on the CBA

The league has released a deviously worded statement on the ongoing negotiations.

NFL statement says they accepted the terms on the principal elements of a new CBA. Heads to a players vote next. pic.twitter.com/Oxx1nMCPKY

Why do I say deviously? The statement makes it sound like the agreement going to the players has all been agreed upon by the negotiators on both sides, and if the players decline to accept it, it is all on them for any lockouts if things stall after that. That isn’t exactly the case, as the subsequent decision by the NFLPA to delay it’s own vote shows.

And it it doesn’t note the negative aspects for the players.

First and foremost, the proposed new agreement entails going to a 17-game schedule, although that would likely not go into effect this fall. That does not include an additional bye week, but does cut one preseason game out. That extra game is tough on the players, who already have a difficult time getting through a 16-game slate healthy, much less playoffs. The playoffs are also reportedly being expanded from 12 to 14 teams, although the owners are taking the stance that they can do that without it being part of the CBA negotiations.

Obviously, that extra game means the players deserve to be paid more, since they are working more. And there is an odd provision regarding that.

How would players be compensated for a 17th game if they signed contracts based on a 16-game schedule? Basically, under proposed CBA, they’d get an extra game check, but it’d be capped at $250,000, per sources. So the highest-paid players would play for less than usual.

This affects any players with two or more years remaining on their contract. Without such a provision, most players would want to immediately redo their deals to get paid for the additional game. But that $250,000 cap is a prime example of how the billionaire owners just can’t keep themselves from trying to pinch pennies. Even a team with tons of big contracts would only wind up paying a few million more per year, which is not really significant in the face of the expected growth in the already very substantial payments for rights to show the games. But the players with large salaries will be effectively giving a discount to risk their health one more game. And since the latter years of contracts involve more non-guaranteed dollars, that risk could cost them millions in future earnings.

It has led to the mentioned above snag as the NFLPA executive committee has deferred even voting on the proposal until they meet with the league representatives again next week.

The 17-game schedule is sought for one purpose only, to increase revenues from the broadcast and webcast outlets by offering them more product. It promises to do just that. Paying a little bit more that extra game to a handful of players still on contracts based on 16-game seasons, a problem that will go away in a few years anyway, is just a good investment. Instead, the owners choose to try and make the players the bad guys. It is shortsighted, chintzy, and dishonest. Don’t be fooled. You may want the NFLPA to take the new deal, but don’t consider them greedy or the bad guys if they prefer to protect the star players that make this league so popular in the first place. That’s what a bunch of billionaire owners who see nothing wrong with charging you $9 or more for a beer would like you to think.

There’s nothing wrong with giving Dez a shot

It is not surprising to see Dez Bryant working out and trying to get another shot at playing. It is also not really that much of a shock that he would be interested in coming back to the Cowboys where he played all his games before being released.

What is a bit unexpected is that the team has shown at least a willingness to consider things. That mostly is based on Stephen Jones not rejecting the idea out of hand, but at least we can say there’s a chance.

Count me as one who would be intrigued to see what Bryant might still have in the tank. It would be predicated on him being content as the WR3 or WR4, depending on who else is on the roster. But he might just be able to fill the role that Jason Witten was supposed to last season. Given the lack of tight end resources already on the roster, that may be worth thinking about. It’s not to say he would be a tight end, just that in an offense that is more focused on passing and using motion and formation to open up running lanes, the team may not need to carry as many tight ends. That could let them go heavy at wide receiver.

Any deal would have to be a very cost effective one from the team’s standpoint, with little or no guaranteed money. But wouldn’t it be fun to see Bryant lined up in the red zone again?

Last season started with such promise for new offensive coordinator Kellen Moore. The team just blew out the New York Giants to open the season, but things eroded quickly. The offense looked markedly more conservative when it was on the road or facing a tough (as in winning record) opponent. That led to the question of whether it was Moore going through rookie struggles, or Jason Garrett throttling him back.

We will probably never be absolutely sure, but the decision to part ways with Garrett and bring in McCarthy while retaining Moore is a more than small hint of what the ownership believes. McCarthy has praised Moore’s creativity. Now we will get to see if he is going to be unleashing the purportedly innovative and unpredictable OC.

I was guardedly optimistic about Moore at this time last year. I am more optimistic this year, although as you may guess, not ready to buy in completely until we see more evidence on the field. I do think McCarthy brings some things to the table that are going to be a bit different from the reflexive caution that Garrett seemed to exude at times.

It is another reason for the Cowboys to get those deals done before deadlines make things harder and more prone to mistakes.

The annual Underwear Olympics start Monday. It’s the real kickoff of draft season, and there are going to be a bunch of new drills this year to try and make things more relevant.

You are going to see breathless reporting about how players are shooting up or falling down draft boards. It is wise to remember that the draft boards involved are the ones you read online, not the ones being built by teams. The reality is that much of the “movement” you see is a reflection of writers at the big sites, who are in attendance, are gathering and learning from scouts and coaches about how teams see the participants. The resulting adjustments are just the outside observers trying to be more in line with what is going on in on in real draft rooms.

Of course, not all teams see things the same way. That is part of the fun of the draft. One franchise’s gold may be junk to another, and vice versa. This is especially true after the first day, as evaluations tend to diverge more and more.

So enjoy the NFL Combine and the coverage. Just take what you read with a grain of salt.