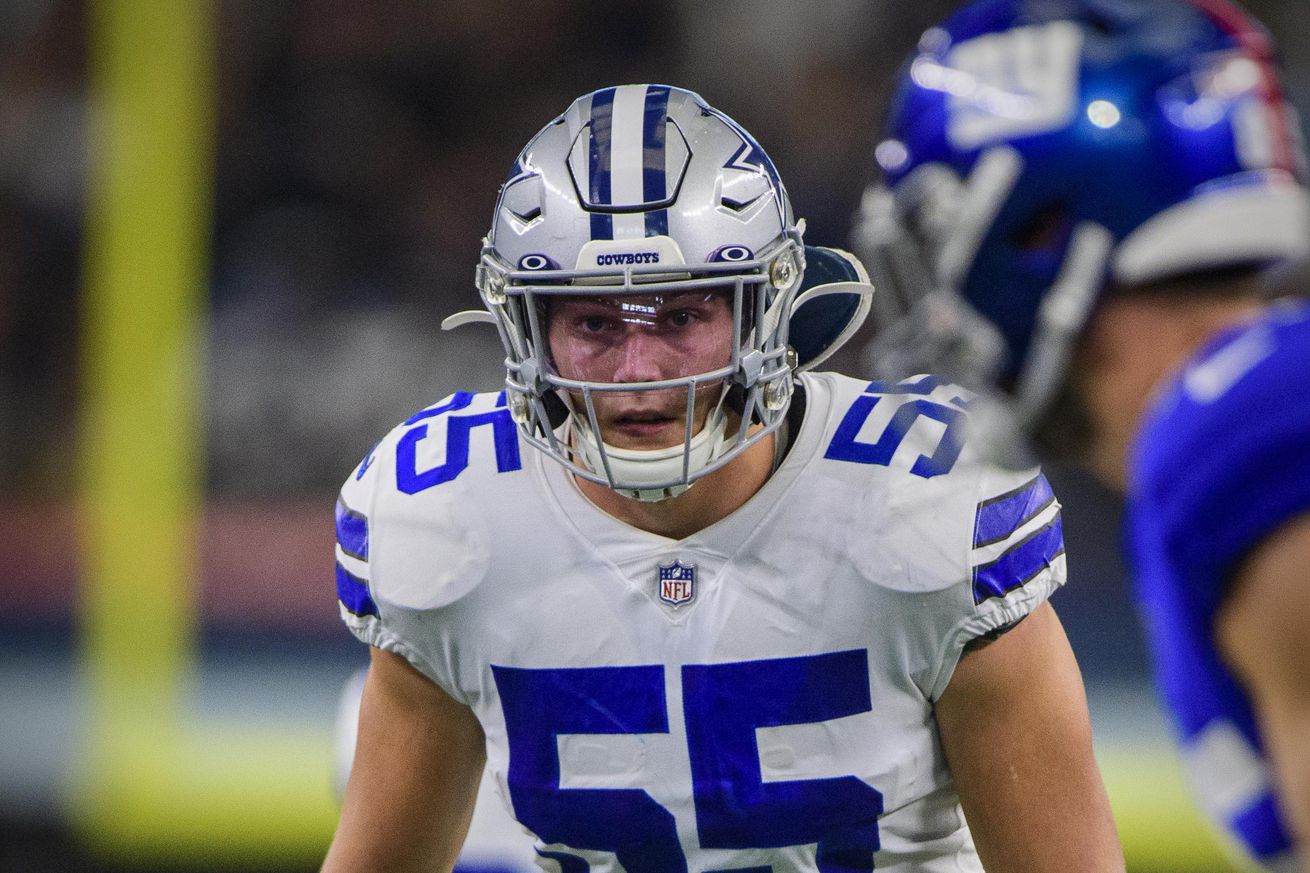 All the Cowboys news to start your day.

An update on LVE’s condition.

There was some concern about the long-term outlook for Cowboys linebacker Leighton Vander Esch after he suffered a season-ending neck injury last year, but the prognosis got better after doctors determined he’d need minimally invasive surgery to fix a nerve problem.

On Monday, Cowboys executive vice president Stephen Jones provided an update on how things look for Vander Esch regarding the team’s offseason program. Jones said the team expects Vander Esch to do some work this spring, but that they won’t know just how much for some time.

“Once we see him, we’ll have a better feel for it. But he’ll have some limitations up until training camp before we really turn him loose,” Jones said, via Michael Gehlken of the Dallas Morning News.

Cowboys LB Leighton Vander Esch (neck) is expected to participate in spring workouts to some degree. VP Stephen Jones on exact schedule: “Once we see him, we’ll have a better feel for it. But he’ll have some limitations up until training camp before we really turn him loose.”

“It’s a slap in the face for people to say he should take less,” said Woodson, who was inducted into the Texas Black Sports Hall of Fame on Saturday. “That is a slap in that man’s face. They are not out here. I am watching every day. My office oversees the practice field. And there ain’t nobody on that team that works harder than Dak Prescott. He is putting the work in. The man deserves it. That is commitment.”

Woodson has an office at the Cowboys headquarters at The Star in Frisco with his commercial real estate company ESRP. He also owns a software company.

Cowboys Hope To Sign Dak Before Tag Deadline – The Mothership

The Dak Prescott situation is still waiting for the starting gun.

Two weeks ago, things were “fixing to heat up” in regard to Dak Prescott’s contract situation, to hear it from team chief operating officer Stephen Jones. But as of Monday afternoon, it’s cold and rainy in downtown Indy – and it doesn’t sound like talks with Prescott’s agents are particularly warm.

”Will we talk to them? Hopefully so,” Jones said. “We don’t have a firm meeting set up yet, but the intent would be to visit with him.”

That’s where things have stood for much of the past six months. The Cowboys and their star quarterback were on the verge of a new contract at the outset of the 2019 season. But when those conversations stalled, the two sides ceased contact and haven’t had any serious negotiations since September.

Byron Jones Contract May Be One Too Many – Lindsay Cash Draper, The Mothership

Reading between the lines, it sure doesn’t sound like Byron Jones will figure into the Cowboys plans.

“Byron’s a guy we think a lot of,” Jones said. “He’s had a great run at corner, he’s played really well, played at a high level. That’s the hard thing when you have quite a few good players on your football team, is you get challenges.”

Reading between the lines here raises the question if Byron Jones has a future in Dallas.

”I know Byron understands that, but at the same time he’s worried about Byron, as he should be,” Jones said.

As far as conversations go, the front office plans to have plenty of run-ins with agents while in Indianapolis for the week and anticipates discussions about Byron popping up in the future.

”Certainly we’ll continue, we’ll visit with his guys while we’re here – kind of see their direction and what they’re thinking and we’ll have to keep moving,” Jones said.

A name we haven’t heard much about in the draft, but we might be after the combine.

One player who hasn’t received much buzz up to this point but will likely receive more once the combine is over is Wisconsin’s Zack Baun.

Listed at 6-3, 240 pounds, Baun lacks the size but possesses all the skills to be a productive edge defender in the NFL. He’s an ascending pass rusher who uses an array of moves and fine-tuned footwork to find success. He’s also very comfortable in coverage and is a plus run defender. Nevertheless, that lack of size has many evaluators thinking Baun should move to off-ball linebacker as a pro.

If the Cowboys really do want to be as multiple with their defensive fronts as indicated, Baun would be the perfect movable piece to unlock the multiplicity of their front. When in a traditional 4-3 alignment, Baun can provide value as the SAM linebacker. In a 3-4, he can be an outstanding outside linebacker. In a 3-3-5, Baun can be a “Jack” linebacker who aligns everywhere and can either rush or drop into coverage on any given play. You get the picture: The only limit to Baun’s usage will be the creativity of his defensive coordinator.

Regardless of the position(s) he plays in the NFL, don’t be surprised if Baun puts together one of the most impressive all-around performances at the combine. On tape, he has the speed, explosiveness and agility that should translate well to the on-field drills.

Witten, Jarwin, or someone else. What are the Cowboys plans at tight end?

Witten has the most receptions and receiving yards in franchise history. He has played more games in a Cowboys uniform than anyone. Dez Bryant is the only player in club history with more touchdown receptions.

That doesn’t mean he’ll be back. Witten wants to continue to play, but the most likely option is the final chapter of his playing career will be written with another team.

Jarwin is a restricted free agent, but the Cowboys will probably place a second-round tender on him to discourage interest from other teams.

It’s Combine Week. We’re talking about it on the latest episode of The Ocho.