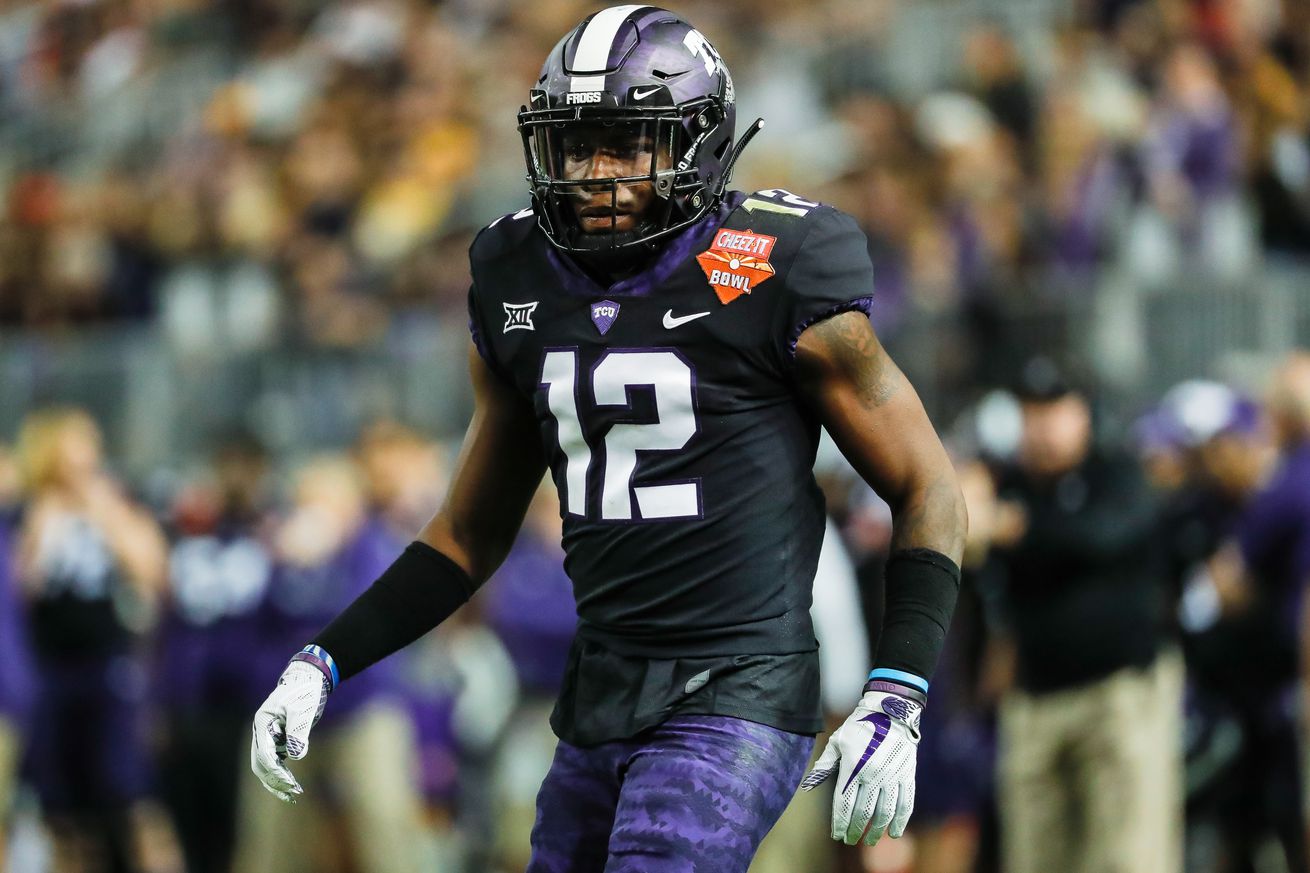 If the Cowboys let Jones walk, keep an eye on these three corners.

There has been talk that the Cowboys plan on bringing both of their free agent wide receivers back in the fold in Amari Cooper and Randall Cobb. Mike McCarthy addressed exactly that on Wednesday in Indianapolis at the NFL Combine.

With Dak Prescott also expected to receive a new contract, the Cowboys will not be able to bring everybody back. That brings our attention to cornerback Byron Jones, who has been among the best corners in the league since making the transition over from his safety position.

Many have their eyes on Jones during this free agency period, and it is pretty much the consensus that the Cowboys will be without their 2015 first-round pick. Therefore, it is important to address that need through the draft.

Here are three realistic options for the Cowboys to target in the first three rounds of the upcoming draft.

ROUND ONE; Jeff Gladney, TCU

Dallas native Jeffery Okudah is all but locked to be a top-5 selection in the 2020 NFL Draft. Florida’s C.J. Henderson and LSU’s Kristian Fulton are two other names that have been thrown around in first-round mocks — specifically in regards to the Cowboys.

Jeff Gladney, however, is another one of those corners that has entered the discussion for the first-round. The TCU product measured in at 5-foot-10 and 191 pounds to go along with nearly 32-inch arms. While you would hope Gladney would have measured in a little bit better, he has the traits to become a starting corner at the next level.

The New Boston, Texas, native totaled 146 tackles and five interceptions during his career in Fort Worth against explosive offenses led by a variety of talented quarterbacks and offensive masterminds. He was tasked with defending the likes of slot speedsters Marquise Brown and Jalen Reagor and star outside guys such as CeeDee Lamb and Denzel Mims.

Gladney turned in 17 reps on the bench press and an unofficial 4.49 40-yard dash in Indianapolis. The former TCU star also impressed with his footwork during Sunday’s drills — all while testing with a torn meniscus!

With Henderson impressing at the combine, there is a chance that both Okudah and the former Florida defensive back are off the board by the time that the Cowboys come on the clock. Gladney, though, is a talented defensive back that can make an immediate impact in the secondary should the Cowboys opt to go that route in round one.

There was a lot of talk that Cameron Dantzler could be in play for the first-round entering 2020 NFL Combine week. In fact, draft evaluators Bucky Brooks and Lance Zierlein each slotted the Mississippi State corner in round one of their mocks. There’s a lot to like from the receiver-turned-defensive back.

Unfortunately, Dantzler did not run very well on Sunday. The Louisiana native ran in the mid 4.6’s in the 40-yard dash, causing some to take a step back. Dantzler is not known to be a speed guy, but a time like that does not help his stock at all. It also does not do him any good that he measured in with 30 5/8 arms (23rd percentile according to mockdraftable) despite his 6-foot-2 height (94th percentile).

Strictly on film, there is a lot to like about Dantzler. In the SEC West, Dantzler was forced to go head-to-head with some of the best wide receivers in college football week in and week out. Dantzler held his own and then-some against the likes of LSU’s and Alabama’s lethal receiver corps:

Cam Dantzler allowed a combined 3 catches vs Alabama & LSU. You can’t teach size (6’2). And I’ll bet on any corner coached by the great Terrell Buckley. pic.twitter.com/KcJRrthU1q

Speed and strength are two of the biggest concerns regarding Dantzler. Running poorly and not benching in Indy do nothing to ease those worries. Because of that, there is a chance that his stock drops.

With that said, Dantzler did seem to run better than his time on tape, which matters more.

A true example of a testing number not matching the tape. https://t.co/taubM43njJ

51 may be too rich for a defensive back that ran 4.64. In fact, the Mississippi State DB likely lost himself a good deal of money with his combine performance. There is a chance that he can be a round three candidate for the silver and blue.

Still, the Mississippi State defensive back has good film, a lot of confidence, and has succeeded against some of the best competition that he has lined up against.

It is well-known that the Cowboys have liked to draft from big schools with Will McClay in charge. Two power-5 defensive backs and another from Notre Dame surely fit that bill.

For all of the concern about speed with Dantzler, Pride Jr. has no worry in that regard. The Notre Dame product clocked in a 4.40 40-yard dash at the combine, displaying his elite speed in front of scouts. Pride Jr. also performed well in the positional drills, which should help his draft stock rise.

Pride Jr. was a productive player for the Fighting Irish during his four seasons in South Bend. The former top-100 prospect out of South Carolina recorded 121 tackles and came away with four interceptions for Notre Dame. He also added two forced fumbles, recovering one of those two on his own.

Troy Pride coming up BIG with the strip and recovery.

The Notre Dame product was able to carry over the momentum that he built in Mobile at the Senior Bowl into Indianapolis at the NFL Combine. In south Alabama, Pride had himself an impressive week in both practice and in the game itself.

Notre Dame CB Troy Pride Jr. may be the biggest draft board riser this week. pic.twitter.com/0cKXwvDb9f

The tricky thing regarding Pride Jr. and the Cowboys is that there is no guarantee he will be there at pick 81 after his performances at both the combine and the Senior Bowl; however, Pride Jr. is a name to know at the cornerback position.