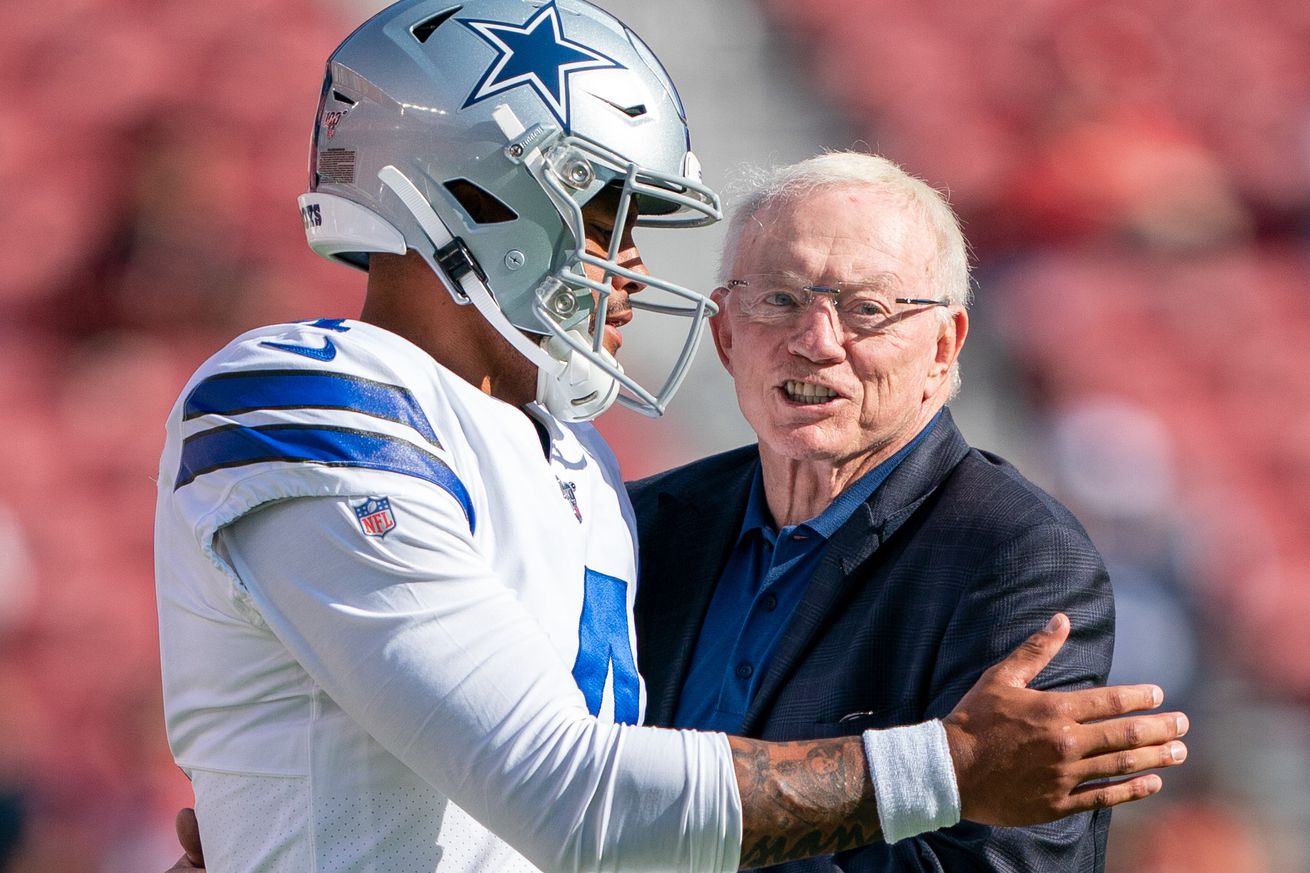 It sounds insane but perhaps one crazy thought is just a creative way for Cowboys to lock up their quarterback,

With Dak Prescott about to break the bank, here’s why an outside-the-box deal makes sense for both sides -Jason La Canfora, CBSSports.com
Could Cowboys and Dak Prescott take a leap of faith to make long-term deal be too good to refuse for both parties?

The Cowboys love doing long-term deals, with the eight-year extension they got stud left tackle Tyron Smith to sign in 2014 — with two years still left on his rookie deal — most emblematic of that. And Jones has long championed his quarterbacks, displaying great loyalty to Tony Romo and now Prescott. He doesn’t want to have to be doing new deals with his QB every 18-24 months, and with revenues about to explode in coming years through gambling and broadcast deals, there is no doubt that this owner would love to do as long a deal as possible.

So how about 10 years at $350 million, including a $125 million signing bonus and a staggering $143 million paid out in the first three years of the deal alone? Think that might get Dak’s attention? And while any QB giving up that many years of his prime earning potential seems outlandish — and might be a non-starter for some players and agents — there are some serious trade-offs within this hypothetical proposal that at the very least would have to give Prescott pause.

Dak Prescott, Amari Cooper just pieces of Cowboys’ big free agency puzzle – Todd Archer, ESPN
How much space do the Cowboys have to work with and what other figures play a part in getting things done with extensions for their two big stars?

$34 million: The expected cost of the exclusive franchise tag on Prescott, which would prevent him from signing with another team. It would increase any talks on a contract to about $75 million in the first two years. If the team uses the franchise tag on a player in consecutive years, it comes at a 120% raise.

$33 million: The APY of the Cowboys’ offer to Prescott last season, according to sources, that the quarterback declined. Prescott’s fast start to the 2019 season — nine touchdowns, two interceptions in the first three games — seemed to put an end to the in-season negotiations. Jones said the team stopped talking with the quarterback’s agent after September and didn’t resume until last week at the NFL scouting combine in Indianapolis.

CBA Updates: Players Set To Vote On CBA Proposal – DallasCowboys.com Staff
The Cowboys are waiting on the new CBA proposal vote before they can start making moves with some of their star players.

Ballots for the proposed new NFL collective bargaining agreement have been sent to the league’s players, with voting open through next Wednesday, March 12, per NFL Media and reports.

The proposed CBA would go into effect with a majority approval vote by the players.

March 12 is also the current deadline for NFL teams to use the franchise and/or transition tag to maintain players’ rights, per reports. That’s a pertinent date because the Cowboys have prioritized new contracts for free-agents-to-be Dak Prescott and Amari Cooper this offseason, but no deals have materialized yet. If the new CBA is approved, teams such as the Cowboys wouldn’t have both tags as an option.

Broncos expected to let Ronald Leary walk, guard open to Cowboys reunion: ‘I do still have my crib in Dallas’ – Patrik Walker, CBSSports.com
The Cowboys might have the opportunity to bid on a former starter with tread left on the tires.

A reunion might be in order here. It’s well-known the Dallas Cowboys have had issues at the left guard position recently, and not-so-coincidentally since they allowed Ronald Leary to walk in free agency. The veteran offensive lineman joined the Denver Broncos following the 2016 season on a four-year, $36 million deal, and that was a price the Cowboys weren’t willing to pay. They’ve since been trying to figure out how to fill the void left behind by Leary, but haven’t consistently been able to over the past three seasons.

Leary’s deal with the Broncos included a team option in 2020 that they have reportedly chosen to not exercise, per Adam Schefter of ESPN, making him an unrestricted free agent this offseason and leaving them with a dead money hit of $875,000. Leary himself effectively confirmed the news on social media, when the idea of a possible reunion with the Cowboys began floating about.

Until a new collective bargaining agreement is signed between the NFL and NFL Players Association, the Cowboys will have both the franchise and transition tags at their disposal — but even so, they’ll likely use the former on quarterback Dak Prescott and the latter on receiver Amari Cooper, leaving Jones to offer his services to the highest bidder. After struggling at safety earlier in his career, Jones found a home at cornerback, ranking 15th among CBs who were targeted 50-plus times in yards allowed per catch (6.0) and 24th in forced incompletion rate (15%) in 2019, per Pro Football Focus. He can be expected to draw top dollar — though the team that shells out for him will have to hope he can generate more turnovers than he has over the past two seasons (zero picks and one forced fumble).

Multiple draft gurus fixated on Byron Jones replacement for Cowboys in first-round- Dave Halprin, Blogging The Boys
Just under 50% of our Cowboys mocks this week have one name at the top, C.J. Henderson, the cornerback out of Florida.

With Byron Jones basically already written out of the Cowboys plans, getting a replacement in the first round is starting to dominate the thinking of many mockers.

Even though his 20 reps of 225 pounds on the bench means nothing in terms of his ability to play CB at the next level, it does indicate that he has a good work ethic off the field – 200-pounders don’t just rep 225 pounds 20 times without putting in serious work in the gym for a long time.

As good as the combine was, Henderson’s coverage ability may be even better, as the Florida product may be the best pure cover cornerback outside of Ohio State’s Jeffrey Okudah.

Bolstering the secondary is the primary concern for many Cowboys fans this offseason. Whether it’s finding an improbable way to retain Byron Jones, courting a free agent veteran, making a splashy trade, looking to the college ranks in April’s draft, or piecing together a combo platter of those strategies, it’s no secret that the team needs DB help ASAP.

Dane Brugler’s latest mock draft for The Athletic (pay wall) has the club snagging one of the heroes of last week’s Scouting Combine in Indianapolis and using their first-round selection on a dazzling athlete who could flourish at the pro level. And his projections of the first three rounds has the team staying on the defensive side of the ball as they try to patch up one of 2019’s most disappointing units.

Florida cornerback C.J. Henderson “has a chance to be drafted in the top 10, so [the Cowboys’ 17th pick] might be the latest he comes off the board,” Brugler writes in The Athletic. “With Byron Jones destined to reach free agency, cornerback shoots near the top of Dallas’s draft needs. Henderson needs to be a better playmaker at the catch point, but he is a plus athlete with the size to blanket receivers.”

Antoine Winfield Jr in Round 2 Makes Sense for Cowboys -Matthew Lenix, InsideTheStar
Should the Cowboys wait until day two to go after a safety from Minnesota?

Winfield appeared in 12 games with nine starts as a freshman in 2016 and performed very well. He racked up 52 tackles, an interception, three passes defended, and two fumble recoveries (one for a touchdown). However, injuries would plague the next two years for Winfield as he only played in four games in each after dealing with hamstring and foot issues.

2019 would see Winfield put his name on the shortlist of the best safeties coming out of college. He registered 83 tackles, seven interceptions, 3.5 sacks, two forced fumbles, and a touchdown. For his efforts, he would be named a Unanimous First-Team All-American, First-Team All-Big Ten, and the Big Ten Defensive Back of the Year.

Which other wide receiver name do you need to know? We discuss on the latest episode of The Ocho.