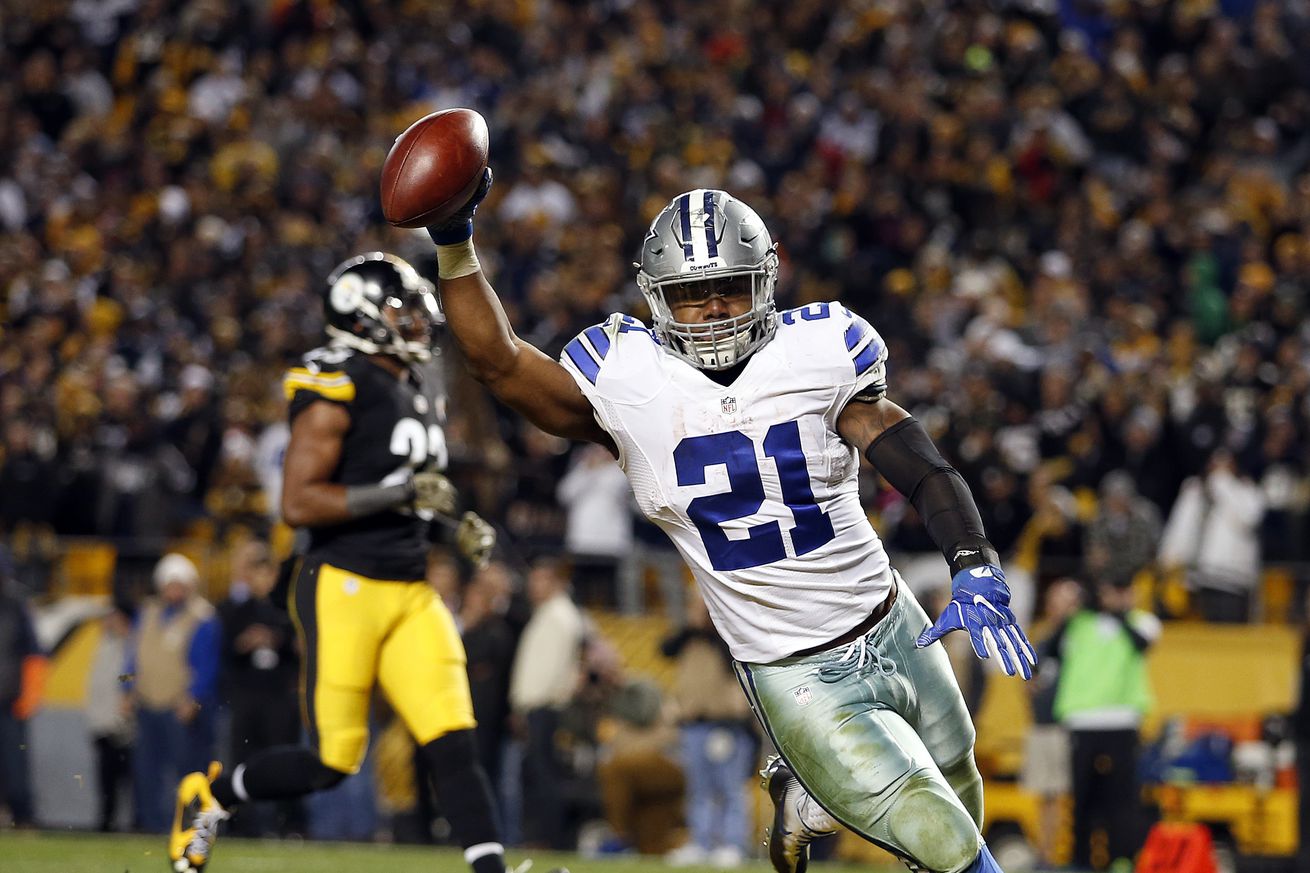 And what’s next for the Cowboys defense?

With people confined to their homes during the COVID-19 pandemic, there’s never been a better time to watch television. Of course, the sports world has been put on hold, but thanks to the generosity of NFL Game Pass, many exciting games are just a click away.

The archives go back to 2009, offering over a decade’s worth of football on various viewing platforms. Games are available in several different flavors: full broadcast (best for enjoying Tony Romo’s crystal-ball commentary, Troy Aikman’s no-nonsense stylings, or Booger McFarland’s head-shaking buffoonery), condensed versions (when you need a quick fix just to pass the time during Frozen 2), and even from the All-22 “coaches’ angle” (for maximum nerding out over the Xs and Os).

Cowboys fans, here’s a collection of games worth going back and re-watching, a full 17-game schedule (because there are no bye weeks in quarantine) to keep you cheering (mostly) while you’re under couch arrest.

The Hot Boyz are helping out in providing hot lunches for those working to keep things under control in these trying times. Well done, Tank.

Update: Excited to announce we are finalizing a food truck “pop-up” at a centralized area to provide 500 meals to those on the front lines of this pandemic helping our sick & keeping our community safe. Best part, the food trucks will be those who reached out for help!

Each team’s wisest offseason move up to this point. It shouldn’t surprise you what the choice was for Dallas.

With so much focus on Dak Prescott and Amari Cooper, the fact that the Dallas Cowboys lost a large swath of their starters from last season has gotten lost in the shuffle. Defensively, that list includes Maliek Collins, Jeff Heath, Robert Quinn and Byron Jones.

Fortunately, the Cowboys found a way to stop some of the bleeding by agreeing to an affordable three-year, $18.3 million deal with defensive tackle Gerald McCoy. The 32-year-old’s best days are behind him, but he’s still a productive player. He registered five sacks and 22 pressures with Carolina last season, which is comparable with the four sacks and 21 pressures Dallas got from Collins in 2019. The signing was a frugal way of patching up a defense that is going to need further investment.

Bob Sturm ponders who would you rather have right now – Maliek Collins or Gerald McCoy? He makes a good case for his decision.

I can tell you that I saw plenty to like. He remains very quick off the snap and has consistently penetrated throughout his career. The flashes might not happen as often, but his intelligence to find weak spots and seize those moments the second the ball is snapped remains intact. He can anticipate and offers plenty of fluidity in his body to work through gaps and put a guard in a really uncomfortable spot where he has no leverage right off the ball. Once McCoy gets one shoulder through, there is no stopping his combination of size and strength with that sort of suddenness. McCoy still has all of that.

He also provides a very solid anchor in direct runs and has always demonstrated plenty in terms of running down plays from behind and also laterally moving on outside zone plays. He has combined great movement skills and size as a defensive tackle for a decade in the NFL.

Dontari Poe Could be Bargain Free Agent DT Option for Cowboys – Jess Haynie, Inside the Star

Would the Cowboys double the fun in acquiring former Panther DT free agents?

The Panthers declined an option of Poe’s contract for 2020 as he would’ve counted around $10 million against the salary cap. But Dallas could likely sign him for half of that amount, if not even less, given the injury issue.

The Cowboys may feel pretty good about the DT position, though, after the McCoy signing. They still have Antwaun Woods, Trysten Hill, and Tyrone Crawford all under contract for 2020 and may add another player in the upcoming draft. However, Poe has great size (6’3″ and around 345 lbs) and talent for playing as the “1-tech” defensive tackle. He eats up space but also provide pass rush if given the opportunity.

It feels like only yesterday that the Cowboys defensive end position group was a strength, but a lot’s changed now.

All of a sudden, this feels like the most pressing need on the Cowboys’ depth chart. Perhaps it shouldn’t have been a shock to see Robert Quinn agree to a four-year, $70 million deal in Chicago. But once that deal was announced, it felt awfully surprising to see the right defensive end spot sitting so wide open.

Clay Matthews and Michael Bennett will both undoubtedly be linked to the Cowboys – Matthews because he spent 10 years in Green Bay with McCarthy, Bennett because he spent the second half of 2019 in Dallas. But it’s worth noting that they’re approaching their 34th and 35th birthdays, respectively. Everson Griffen is an intriguing name. The 32-year-old has been a Minnesota Vikings lifer, racking up 74.5 career sacks since they drafted him all the way back in 2010. He spent the entire 2019 season at right end, where he collected eight sacks opposite Danielle Hunter. He could play a similar role for the Cowboys, working off the favorable matchups provided by Lawrence. The cherry on top of the sundae is that Griffen’s longtime defensive coordinator, George Edwards, now works on McCarthy’s staff in Dallas. If familiarity is important to him, he’d have it here.

It’s easy to overlook some players, and here are three guys to keep in the back of your mind, including a familiar face who could provide help on the edge.

This next name might sound familiar, but that’s only because he finished the 2019 season on the Dallas Cowboys. During the year, Dallas traded a late-round pick to the New England Patriots in exchange for defensive end Michael Bennett. There were some concerns considering he wasn’t in New England long and didn’t produce a lot for them — and would be bringing a big personality. But at that price, it was well worth the gamble. And the gamble paid off. Bennett recorded 27 tackles and four sacks in nine games for the Cowboys while playing both defensive end and sliding inside to play tackle on passing downs.

Dallas selects a slithery edge rusher who put together his best work over the second half of the 2019 season. He should inject some spice into the Cowboys’ pass rush.

A review of the Cowboys secondary in this installment.

The top safeties in this year’s draft are Alabama’s Xavier McKinney, LSU’s Grant Delpit and Lenoir-Rhyne’s Kyle Dugger. Although I don’t expect Dallas to draft one in the first round, those are good names to keep in mind. Cornerback is the position that makes more sense early in the draft. Teams need several good cover corners to compete against today’s pass-first style of offense.

While the Cowboys have some good depth, it makes sense to target someone who could be their new No. 1 going forward, especially now that Jones is in Miami. The prospects that make the most sense with the 17th overall pick are Florida’s C.J. Henderson, Alabama’s Trevon Diggs and Clemson’s A.J. Terrell. Cowboys vice president of player personnel Will McClay likes long corners, and all three fit that mold. They are all 6-1 with long arms (around 32 inches).

The recent release of All-Pro running back Todd Gurley brings about a discussion of Zeke’s deal.

Gurley tore the ACL in his left knee as a junior at Georgia. He came into the league with questions about whether or not it would be a chronic condition. There were no health concerns regarding Elliott. Still aren’t. He’s proven to be remarkably durable. When Gurley is at his best, no back has been a more dangerous dual-threat over the past five seasons. But he gained 1,305 yards in his best season on the ground. Elliott has rushed for more than that in three of his first four seasons. The one he didn’t was cut six games short due to a suspension.

One connection is fair to make. Gurley is a pivotal figure in the six-year, $90 million contract Elliott now enjoys. The Rams decision to sign him to an extension two years before his rookie contract expired set the precedent for Elliott to hold out of last year’s training camp. The Rams release of Gurley underscores that Elliott made the right decision to force the issue. Backs in this league need to make their money early or they don’t make it at all. They are quickly disposable.

All the latest free agency news, including how the Cowboys are using all the tools at their disposal.

The Dallas Cowboys are the first team to employ the new Veteran Salary Benefit mechanism in the new collective bargaining agreement. NFL Network’s Mike Garafolo reported Friday that the deal for Cowboys offensive lineman Joe Looney was a one-year deal worth $2.4375 million, per sources informed of the pact.

Using the Veteran Salary Benefit, which is similar to the NBA’s mid-level exception rule, the deal will count $1.25 million less than the normal cap hit. Each team is allowed to employ the VSB up to twice per year, which allows clubs to exclude up to $1.25 million in total on the salary cap. Teams can divvy up the $1.25 million between the two players, or, as the Cowboys did, use it all on a single player. To be eligible for the VSB, a player must have continuous service with a team for four seasons (he cannot have been cut any time), be a free agent re-signing with the franchise, and can only sign a one-year deal.