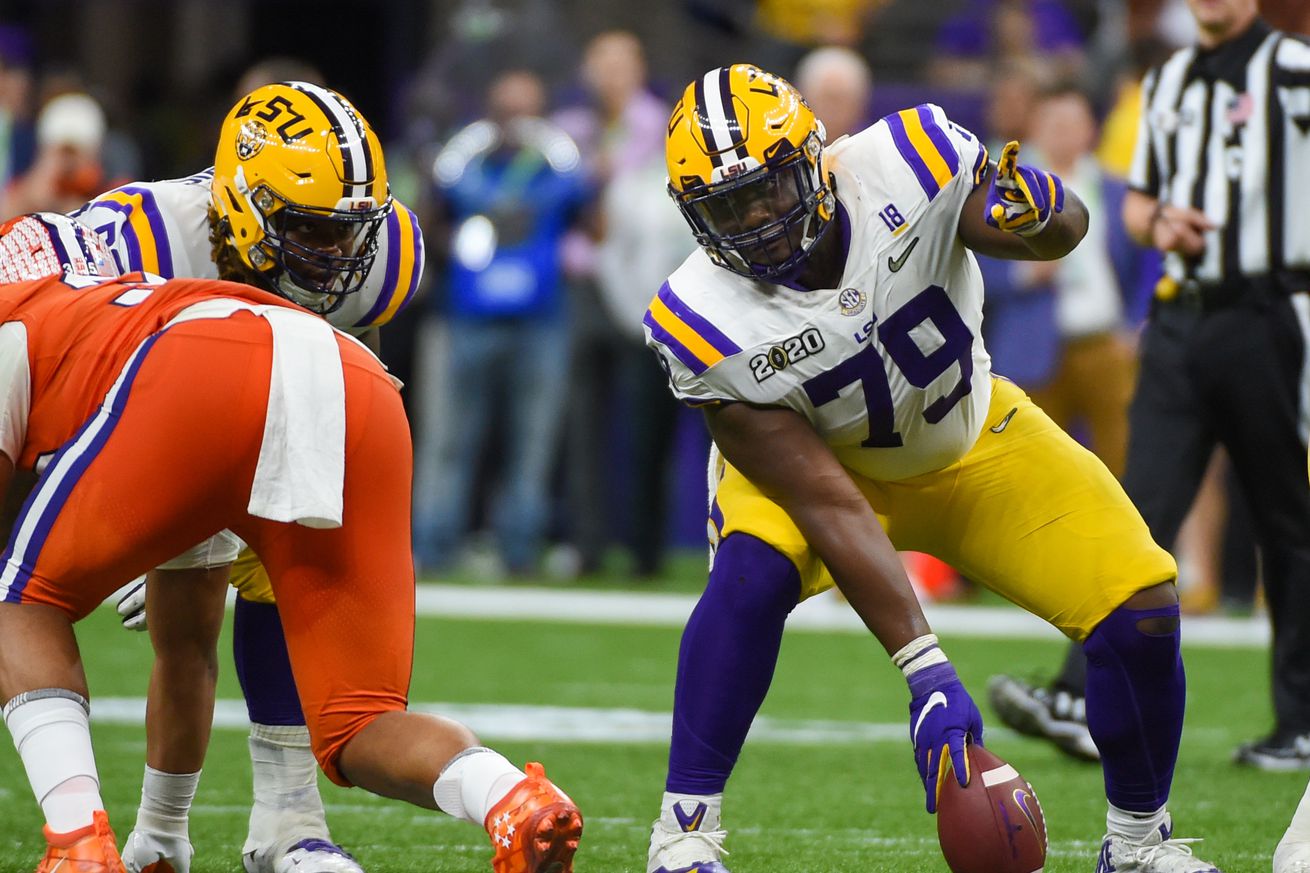 The Travis Frederick news was shocking, but there are options in the draft.

Monday brought the shocking news that perennial All-Pro center Travis Frederick was retiring. After those initial feelings of surprise washed away, many turned their attention to the question of who will be snapping the ball to Dak Prescott in 2020.

Joe Looney, who started all 16 games at center in 2018 and played admirably, seems like the early frontrunner as a replacement. Additionally, Connor McGovern should be in competition for the starting role after effectively redshirting last year with an injury. But there are also some options for the Cowboys to explore in the draft. Here are seven centers that could become a target in Dallas with Frederick suddenly gone:

Depending on who you ask, Cushenberry is either the best or second best interior offensive lineman in this draft class. That shouldn’t be surprising considering he snapped for Heisman winner Joe Burrow and helped block for the most explosive offense in college football.

He’s strong, long, agile, and quick. The buzz around Cushenberry is that his skill set makes him able to fit in any offensive system, and his football IQ is a big reason for that. LSU offensive coordinator Steve Ensminger revealed back in January how involved Cushenberry was in their offense:

We’re asking, Hey, what did Lloyd see. Lloyd Cushenberry is my MVP, I’m going to tell you. He makes probably 99% of the calls, and Joe [Burrow] has his chance to check it.

Cushenberry is a guy who can come in and take the starting job immediately, but it may mean having to spend a high draft pick on him. Some mocks have him going in the top 40, and even in the end of the first round. If Dallas wants him, then they may be wise to trade down in the first round and select him.

For the people who suggest Cushenberry is the second best interior lineman in the draft, it’s because Ruiz also exists. Ruiz is very similar to Cushenberry in a lot of ways, and they both possess equally impressive traits. Ruiz is considered by many to be better as a pulling blocker and slightly stronger.

Yet Ruiz lacks the length that Cushenberry does, which is only a problem if you prioritize length in your linemen. It didn’t impact Ruiz too much, and while he didn’t play as integral a role in making calls on the line, Ruiz does have experience doing so. Like Cushenberry, Dallas would need to spend an early pick on Ruiz and may not be able to select him with their current second-round pick.

What better way to replace a former Wisconsin center than with another center from the school that consistently churns out talented linemen? Biadasz had a dominant 2018 season that set him up as the top center heading into 2019.

However, after getting surgery for an AC joint injury in the offseason, Biadasz’s play in 2019 saw a sharp regression. He looked slow and sloppy far too often. It’s entirely possible that this can be attributed to his surgery, especially considering that Biadasz has an extensive body of work pre-surgery that was impressive. But the gamble here is predicated on Biadasz being able to return to that form. If so, he’s got the skills to fit in the Cowboys’ scheme and be productive, but there’s plenty of question marks around this prospect. As such, he can probably be had in the third or fourth round unless some team really wants to take a chance on him.

At the conclusion of the 2019 season, Harris was in prime position to take the mantle of top interior lineman away from Biadasz, whose struggles were becoming evident. But poor performances in the Senior Bowl and combine cooled off that talk considerably, dropping Harris into the conversation of being a day two pick at best.

Still, Harris has plenty to offer based on his tape. He’s an athletic player who projects best to a zone blocking system, and while he played a lot at guard he has thorough experience at center as well. In the right system, Harris can thrive; if Dallas is the right system, then he might be the perfect target for the Cowboys.

Hennessy is the classic example of that player who comes from a smaller school and impresses people enough at the Senior Bowl or other similar programs that it forces scouts to look at his tape closer. Because of that, Hennessy has risen a lot since the regular season concluded and is likely a surefire bet to be taken somewhere in the second round.

Considered an ideal plug and play prospect at center, Hennessy is very fundamentally sound. He’s not athletically gifted like Cushenberry or Ruiz, but he makes up for it with refined body positioning and by taking exceptional angles in blocking. A former two-star prospect, Hennessy has succeeded because of his effort and attention to detail, which could help him continue to thrive with the Cowboys’ offensive line.

Jackson started out at Rutgers and played for Ohio State as a grad transfer in 2019, putting up some very impressive tape at both programs. He’s considered by most to be a guard, given that he spent most of his junior year at right guard before starting every game at left guard in his final season, but Jackson has the experience and skill to play at center as well.

Jackson is a very mobile lineman who has impeccable footwork, which helped him earn first team All-Big 10 honors in 2019 despite going up against some terrific defensive linemen. His versatility makes him an attractive option, but Jackson might be off the board very early in the second round, making it difficult for Dallas to get him.

If the Cowboys feel confident in Looney or McGovern, and/or don’t want to invest a high draft pick in the center position, Hanson presents a very viable option on day three. Oregon had one of the very best offensive lines in college football the last few years, and Hanson was a big part of it.

He’s an athletic player who seemed to thrive in more zone blocking concepts, which makes him a match for the Cowboys’ zone blocking scheme. Like Frederick, Hanson was largely in charge of making calls at the line and adjusting protections, so he’d be comfortable with taking on such a responsibility in Dallas. Hanson’s biggest issue is strength, and may need a year in an NFL strength and conditioning program to bulk up. So he could spend a year behind Looney or McGovern on the depth chart before taking on a starter’s share of work.