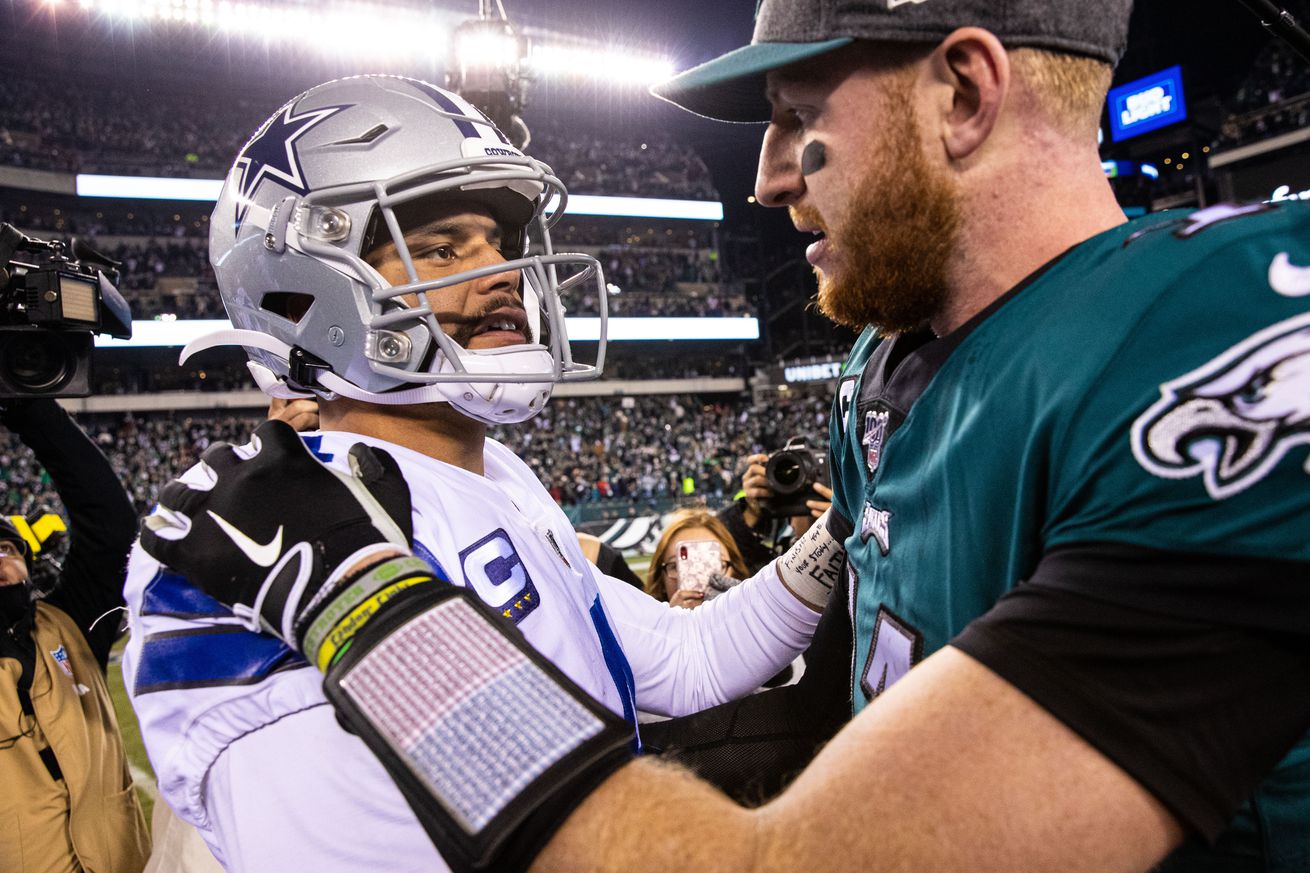 Do the Cowboys have the firepower to win the NFC East?

The easiest way to make the NFL playoffs is make sure that you build a team with the ability to win your division. After letting the NFC East title slip through their fingers last season, the Dallas Cowboys made the biggest change any team can make, and that’s bringing in a new head coach with an almost entirely new coaching staff. On the continuity side of things, the Cowboys franchise tagged their quarterback, Dak Prescott, making sure he didn’t hit the free agent market, and re-signed Amari Cooper, making him the second highest paid wide receiver in the league. They also made the decision to wade into the free agency pool this season with the signings of free agents Gerald McCoy, Dontari Poe, Ha Ha Clinton-Dix, Aldon Smith and Maurice Canady, but is that enough to get back to the top of the NFC East mountain top?

If the goal is to win their division then let’s see how they stack up to each team in the division.

The Giants are going into the season with a new head coach and a familiar face in Jason Garrett taking over as the offensive coordinator. Based on their additions so far, you are looking at a team that is banking on rebuilding through the draft. Outside of bringing in Bradberry and Martinez, they haven’t done much to address the holes on this team. They replaced longtime starter turned back up Eli Manning with Colt McCoy, that’s a drop in talent even after Manning’s decline in performance. They also haven’t found anyone to replace Golden and his 10 sacks last season.

So if you compare this roster as it is currently constructed, then the Cowboys have the edge on both offense to exploit their secondary with Cooper and Michael Gallup and defensive line with Ezekiel Elliott and Tony Pollard. They also have the edge on defense with McCoy, Poe, Smith and DeMarcus Lawrence against a weak offensive line.

Last season’s NFC East champs have been very busy in free agency and of all the teams in the division they may have brought in the most impactful players this offseason. Adding Hargrave to the already stout defensive line led by Fletcher Cox gives the Eagles the best defensive line in the division, then you add Slay and McLeod on the back end of a secondary that couldn’t stop any receivers last season and you are looking at a defensive unit that can do some damage in the division. Especially against a Cowboys offensive line missing the now retired Travis Frederick at center.

On the offensive side of the football, the Eagles have some work to do after losing their swing tackle Vaitai and not re-signing their starting left tackle Peters. This was already an offensive line that surrendered 37 sacks, good for 12th worst in the league. They did draft a tackle last season to replace Peters, but he still has a lot to learn and will have growing pains as a full-time starter.

All that being said, the edge goes to the Eagles with that defensive line and their ability to create pressure and stop the run. The Cowboys will have to hope that who ever they decide will snap the ball to Prescott will be able to handle the team of Maliek Jackson, Hargrave, and Cox.

The Redskins situation is similar to what the Giants are currently dealing with, a new head coach, as well as an offensive line that lacks the talent to compete against the defensive lines of the Cowboys and Eagles after losing Ereck Flowers in free agency and disgruntled left tackle Trent Williams who has demanded a trade. They also lack the necessary weapons on the outside to threaten defenses deep making it easy for teams to defend them. While rookie Terry McLaurin burst on the scene for them last season, he isn’t going to be enough to power their offense in 2020.

On the defensive side of the ball, their defensive front is a good unit but one that can’t stay healthy an entire season and their secondary looks better with the addition of Fuller and Darby. They will have to show they can stop opposing offenses in the passing game to make some noise in the division. Overall the Redskins lack the ability to threaten the Cowboys on offense.

Overall the Dallas Cowboys have built a team that can complete with each team in the division, but they need to fill holes in the draft to be able to compete against an Eagles defense built specifically to beat them.