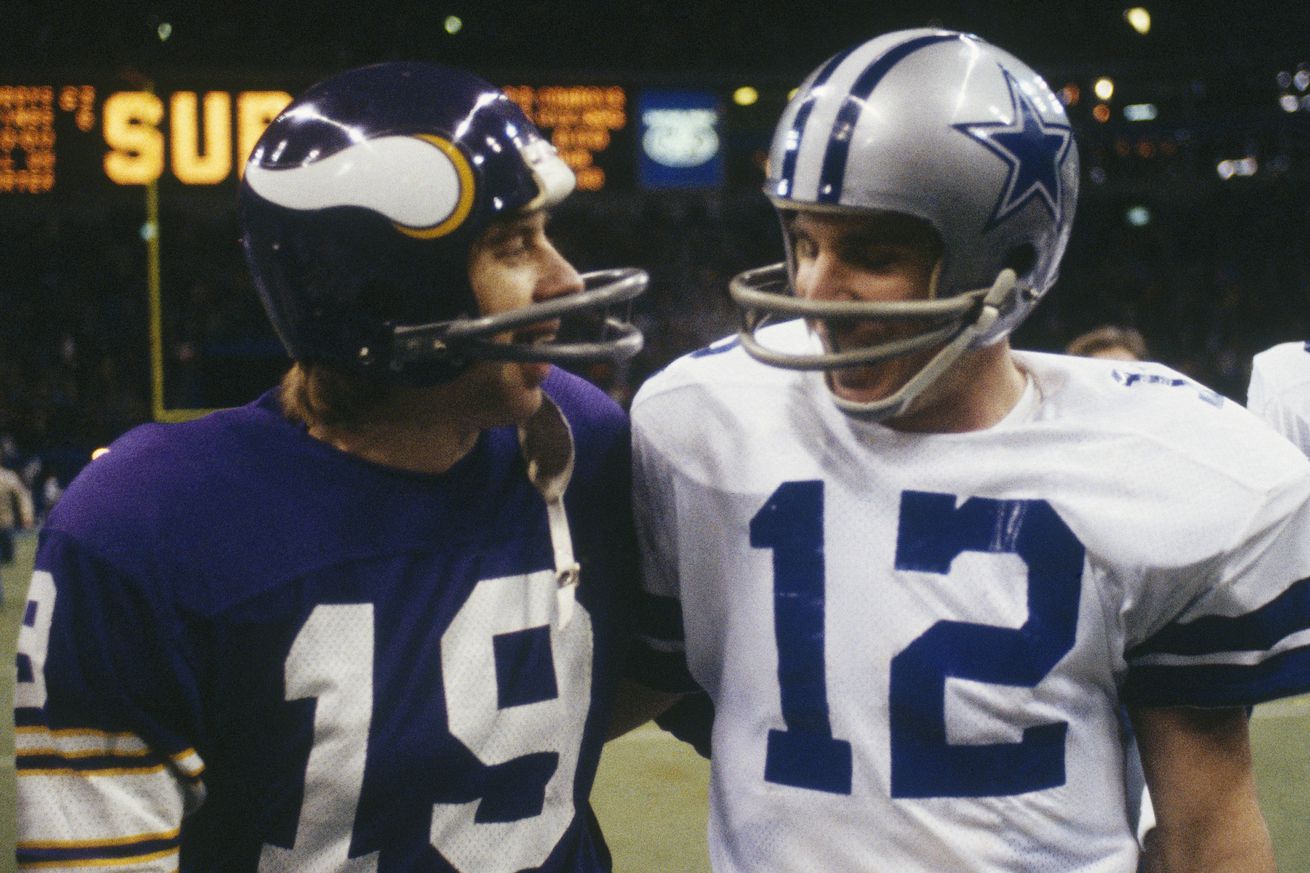 Photo by Focus on Sport via Getty Images

Last chance to see if your favorite play makes the tournament.

BTB’s 64-play tournament comes to a close with the final remaining plays of the first round. Next up will be the Sweet 16 round as we’ll have four new groups, consisting each of four plays based on which of them have advanced through the first round. But before that happens, let’s get through these last four, shall we?

Today’s group features a wide receiver throwing the ball, a couple big defensive plays in the playoffs, and one play so legendary that it has it’s own name.

Witten throws up the X

The 2016 season was exciting as the Cowboys went 13-3 in the regular season and were the #1 seed in the NFC. They capped off their 13th win with a 42-21 Monday night trouncing over the Detroit Lions. The Lions actually had a 21-14 lead midway through the second quarter, but the Cowboys scored four unanswered touchdowns to put the game away.

On that day, everyone got in on the action, including a little unexpected razzle dazzle. With a 1st-and-goal, the Cowboys ran an end-around pitch play to Dez Bryant, but instead of running, Bryant tossed it to a wide open Jason Witten for an easy touchdown. It was such a great play design and was hidden a bit due to Dez being left handed and running to his left. Witten, who is never one to show emotion with a touchdown celebration, paid homage to his passer by throwing up the X.

Speaking of the Lions, the Cowboys scored 17 unanswered points against Detroit in the second half to give them a 24-20 win in the 2014 Wild Card playoff game in 2014. There were many memorable plays from that game, some that have already been mentioned in this tournament. You have the Witten Y-option that kept the game winning drive alive on a key fourth down play. You also have the game-winning catch by Terrance Williams with 2:32 left in the game.

While those were big plays, the real game-winner came with just a minute left as the Lions were trying to mount a game-winning drive of their own. On a 4-and-3, DeMarcus Lawrence beat the left tackle around the edge, enabling him to have the hat trick of sack/strip fumble/fumble recovery that sealed the victory for the Cowboys. What made this even more enjoyable is that Lawrence, who was a rookie at that time, made amends for a previous blunder that happened earlier on that drive. After Anthony Spencer sacked Matthew Stafford, the ball came loose, but instead of just falling on it, Lawrence tried to pick it up and was stripped himself. The Lions recovered and got a new set of downs. Fortunately, nobody remembers that play as much as Tank took matters in his own hands to close out the deal for good.

In 1978, the Cowboys traveled to southern California to face the Los Angeles Rams in the NFC Championship. It was a game that nobody seemed to want to win at first. Aided by a total of 10 turnovers when it was all said and done, the game remained at a 0-0 stalemate until midway through the third quarter. Fortunately, the Cowboys were the benefactor of seven of those turnovers as the wheels slowly started coming off for the Rams.

The Cowboys picked off the Rams five times that game, three thrown by starting quarterback Pat Haden, and two by backup Vince Ferragamo, but it was the last one that epitomized the beat down the Cowboys were giving them. With just a minute left in the game, Ferragamo threw to the outside, only to have Thomas “Hollywood” Henderson jump the route and race down the field for a pick six. That play capped off a 28-0 win, advancing the Cowboys to Super Bowl XIII.

We are just about out of time. The first round is about to come to an end, but before we close this out, why don’t we launch one last play in hopes it somehow lands a spot as one of the Cowboys most memorable plays.

In 1975, the Cowboys were trailing the Minnesota Vikings 14-10 in the Divisional round of the NFC playoffs. Dallas had the ball at the 50-yard line with time for just one more play. Quarterback Roger Staubach launched the ball down the right side of the field into the arms of Drew Pearson for the game winning touchdown. Staubach said afterwards to reporters that he just closed his eyes and said a ‘Hail Mary’ thus immortalizing the play from one of the biggest last-second playoff comebacks in NFL history.

What is just as spectacular but often overlooked is the amazing catch that Pearson had right before this play (bonus play). If you’ve been keeping track at home, you probably are aware of how many big catches Pearson’s had in this tournament, but fewer are more riveting that what the should-be Hall of Famer made on this day.

If you have yet to cast your vote for the previous groups, it’s not too late as you can find them right here…