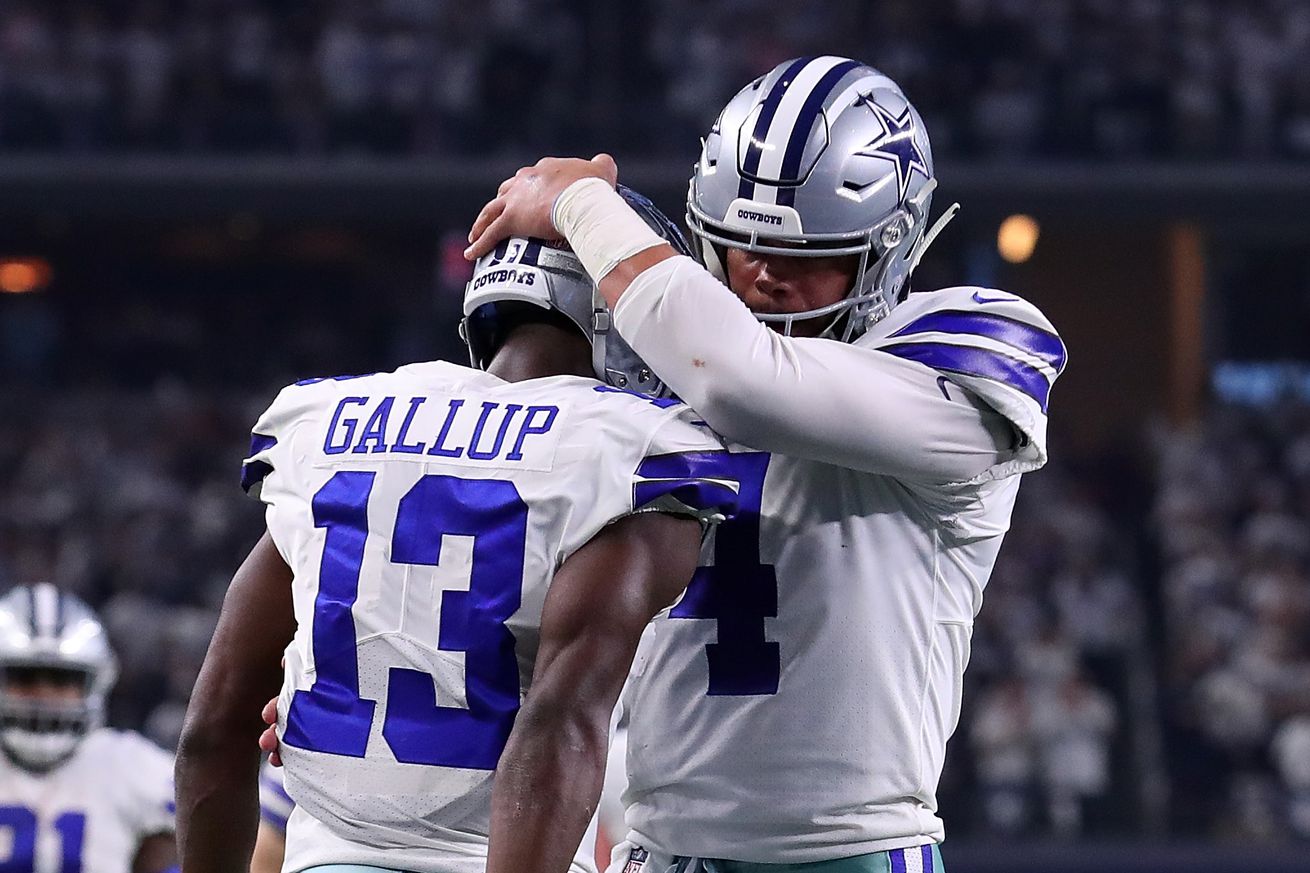 Kick start your Tuesday with the latest Cowboys news.

The Biggest Risk Every NFL Team Is Taking for 2020 – Kristopher Knox, Bleacher Report

I bet you can guess where they are going with this.

The Dallas Cowboys don’t have to worry about immediately losing quarterback Dak Prescott because they gave him the franchise tag this offseason. However, they haven’t worked out a long-term deal, which is risky for two reasons.

For one, it leaves open the possibility that Prescott will hold out for a new deal. If Prescott refuses to play, the Cowboys are looking at the prospect of starting recent free-agent addition Andy Dalton in Week 1. While Dalton is a capable veteran starter, he isn’t the young, dynamic passer that Prescott is.

Waiting to get a deal done will potentially cost Dallas a hefty chunk of cash, too. Kansas City Chiefs quarterback Patrick Mahomes and Houston Texans signal-caller Deshaun Watson are also in line for new deals that could set the bar for Prescott and his agent.

That bar could top $40 million per year, according to the Houston Chronicle’s Aaron Wilson. Per Wilson, Watson could be looking at a deal in the $40-42 million range annually.

With the Cowboys recently giving lucrative extensions to running back Ezekiel Elliott and wideout Amari Cooper, a $40 million salary for Prescott may be tough to swallow. Waiting to extend their quarterback could put the Cowboys in a position where they cannot keep their core pieces in place.

The Cowboys would be very happy if this were to happen.

“He has the ability to move around and create favorable matchups,” head coach Mike McCarthy said, per the Fort Worth Star-Telegram’s Clarence E. Hill Jr.

McCarthy’s point is important because it involves projection of utilization and how opponents will attempt to match the Cowboys’ impressive wide receiver corps.

Gallup isn’t just underappreciated on a national level. He’ll be overlooked by defenses that will roll coverage toward Cooper or worry about where Lamb lines up. The third-year target can quietly go about his business and make secondaries pay.

This is significant since all three of Dallas’ NFC West rivals finished among the bottom half of the league in pass defense last season.

Dallas Cowboys: What should expectations be for Michael Gallup in 2020? – Brandon Ladd, The Landry Hat

People are expecting a lot from Michael Gallup this season.

Setting the projection for Gallup

I love going back to the example of the 2016 Dallas Cowboys as a team that featured not only a successful offense but a template for 2020. That season the trio of Wide receivers Dez Bryant and Cole Beasley, along with tight end Jason Witten respectively had 96, 98, and 95 targets each, and that featured Bryant missing three-games.

Using that template of success and the information that no 2019 playoff team had three-receivers targeted over 100-times. I would project the 2020 targets like this.

Using this, Gallup who averaged 9.8 yards per target in 2019, would sit right around 1,000 yards and other factors would decide if that estimate ends up being higher or lower than 980 yards. So, a lot of opinions are correct, his targets might decrease due to an emerging Lamb and still might repeat another excellent season as a number two option.

With Jason Garrett gone players have to make plays to stay around now.

The man who will be pushing Williams for the left guard spot is much more of a mystery, as McGovern missed his entire rookie year because of a pec injury. McGovern is about 10 pounds bigger than Williams and plays with a much more aggressive demeanor. McGovern is a people-mover who did a great job clearing running lanes in college. Most importantly, McGovern displayed an innate ability to recover when initially put in a precarious position — one of the areas where he has a clear advantage over Williams.

Luckily for Williams, McGovern does have his fair share of issues, especially in terms of his footwork and hand timing. McGovern’s inconsistent footwork in pass protection often leads to variance in McGovern’s movement efficiency. McGovern will often overset shaded defensive linemen, which opens up the inside move for defenders.

Ultimately, while Williams’ starting experience gives him an early advantage, he’s still in real danger of losing the starting left guard gig to McGovern in 2020.

The on-going saga of the Dak Deal continues.

“To me, the Cowboys need a deal more than Dak does,’’ the NFL Network analyst tells me.

The logic? “Rap Sheet’’ thinks management views this as a contending team, and that “windows’’ don’t last forever. There is a “window’’ for this Dak-led franchise … now.

Additionally, Rapoport suggests that while Prescott is uniquely built to be the Cowboys QB (with all the spotlight and pressure that comes with that), he’s also uniquely built to simply play on the $31.409 million franchise tag in 2020 – and maybe to do it again in 2021 if necessary.

“For Dak, it makes a lot of sense,’’ Rapoport says. “(Normally), it’s hard to play in a contract year. It’s hard to bet on yourself. We’ve seen players go the wrong way when it comes to putting it all on the line, betting on themselves while being a contract here.

“(But) I don’t think Dak cares about any of that. He showed us all last year. He’s so good at dealing with the outside world, which is perfect for a Cowboys quarterback.

“I don’t think he’s going to mind betting on himself again.’’

Debunking the Dak Prescott contract debate: The facts and fiction, and why the Cowboys should pay him – Bill Barnwell, ESPN.com

With the two sides playing a chicken, who will blink first?

Typically, the Cowboys try to account for those salaries on paper by offering the longest contracts in football. Elliott and Martin signed six-year extensions, while Tyron Smith was locked up on an eight-year pact. Those deals allow the team to hand out large salaries and then repeatedly restructure those contracts to create short-term cap space. It’s a great plan when everyone stays healthy and productive, but when things go wrong, it can be disastrous. Dallas handed Tony Romo a huge extension in 2013 to help create cap space and then repeatedly restructured the deal; when Romo got injured and lost his job to Prescott, the Cowboys were forced to pay out nearly $20 million in dead money on their cap for their former starter.

All of this gets to the crux of the Prescott contract negotiations: length. The Cowboys have repeatedly leaked elements of various offers, suggesting that they’re willing to give him the second-highest average annual salary in the league while guaranteeing him something close to the $110 million Goff was given by the Rams. Jason Fitzgerald of Over the Cap ran the numbers and projected a logical contract for Prescott coming in at an average annual salary of $35.5 million with a guarantee somewhere around $90 million. (These “guarantees” aren’t the real guarantees, since they’re likely only partial guarantees for injury.) Essentially, he’s going to get somewhere between $32 million and $36 million and have three years of his new deal guaranteed.

Look at things from Prescott’s perspective. The top of the quarterback market perpetually rises as players sign new deals, and Deshaun Watson and Patrick Mahomes are up for new contracts this year. He’s already guaranteed $31.4 million for 2020. If the Cowboys want to franchise him again in 2021, even if the salary cap falls by virtue of missing stadium revenue, Dallas would owe Prescott a 20% raise to $37.7 million next season. He could go year-to-year and make $69.1 million over the next two seasons without having to commit on a longer-term deal.

As Jason Fitzgerald of OverTheCap.com explains, the Cowboys are set to recoup $7 million in cap space this season by waiting to make Frederick’s retirement official on June 2nd.

“Travis Frederick currently counts for $11.975 million on the Cowboys salary cap and would have counted for $11.04 million in dead money had they officially retired him back in March. By waiting the Cowboys only need to account for $4.975 million in dead money this year, opening up $7 million in cap room to bring them to around $12 million for the season. So waiting was clearly the right move for them as they needed some extra cap space. Frederick’s charge next year will be $6.065 million. “

The Cowboys will then have roughly $12 million in cap space to work with for the 2020 season and the possibility remains that there will be more after a couple of moves.

Once the Dallas Cowboys work out a long-term agreement with Dak Prescott, they’ll be able to lower his 2020 cap hit from the hard hold that is the $31 million franchise tag designation. There is no wiggle room with the franchise tag, thus creating a bit of urgency from the team’s perspective to go ahead and get a deal done. Once that deal is done, the Cowboys can free up some more salary cap space.

The other option for the Dallas Cowboys to create more cap space would be to release Defensive Lineman Tyrone Crawford, though that seems highly unlikely at this point.

Way too early roster predictions are starting to pop up.

Finally for the Cowboys, the defensive backfield.

The team lost star cornerback Byron Jones to the Miami Dolphins, an expected loss on the back end of the defense. They also lost longtime safety Jeff Heath to the Raiders.

To replace those guys, the Cowboys brought in a variety of players.

At safety, they signed veteran Ha Ha Clinton-Dix who played last season with the Chicago Bears to pair with Xavier Woods at the safety position.

At cornerback, Dallas’ biggest addition was Alabama’s Trevon Diggs, who should be counted on to start as a rookie. Fourth-round pick Reggie Robinson is a tremendous athlete whose productivity at Tulsa was vastly underrated and he could be a big-time steal in this class.

Dallas’ safety depth is not great but they could rotate players at different positions in Mike Nolan’s defense.

What could Cowboys training camp look like? We hypothesize on the latest episode of Girls Talkin ‘Boys.