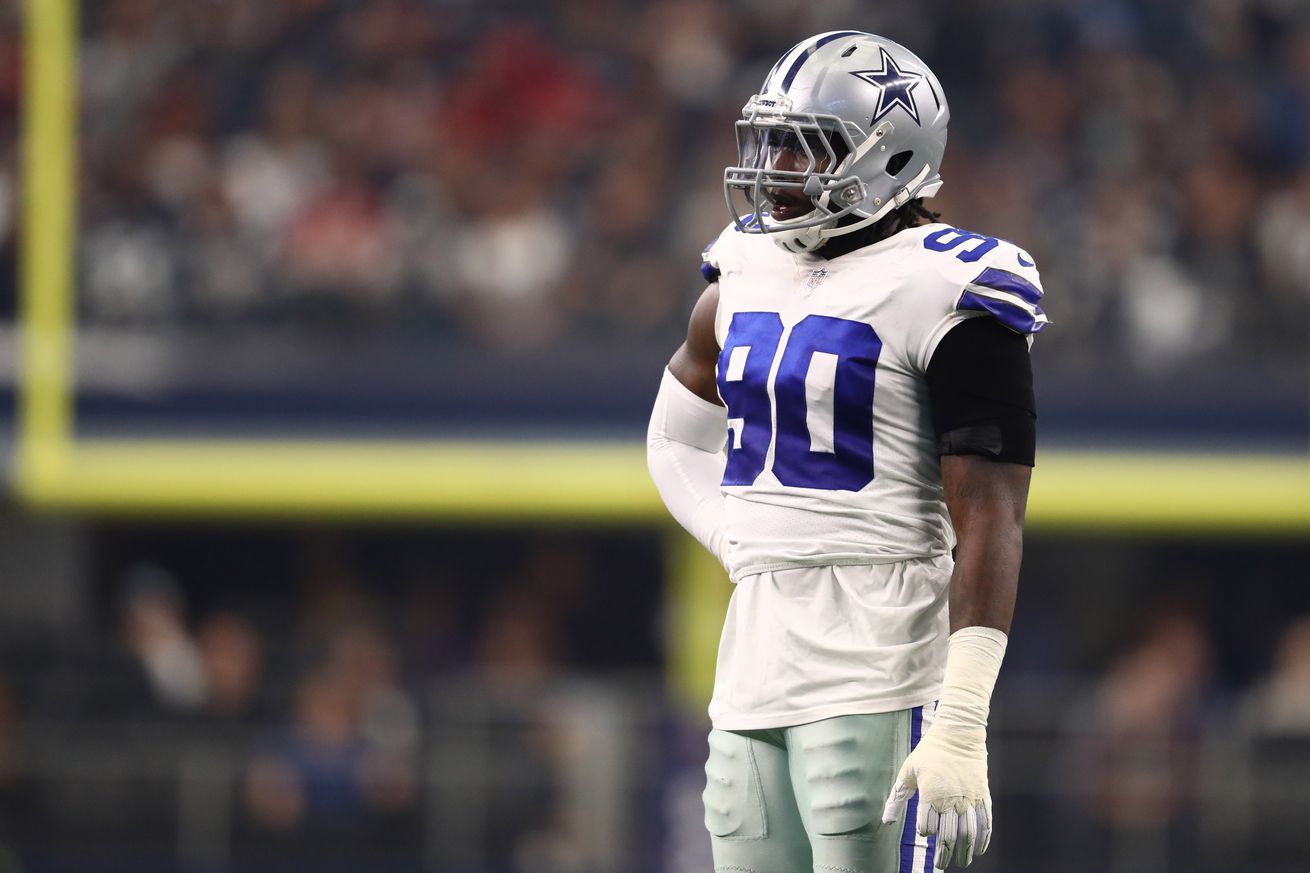 DeMarcus Ware: “I played with Rod Marinelli in his 4-3 defense and, you know, it’s four guys, three linebackers, corners… It’s more about coverage and the four guys getting to the quarterback. But now, you’ve got a whole new person coming in and the 3-4 defense is all predicated on getting pressure, pushing the pocket up the middle, stopping the run, bringing the outside linebackers to create those turnovers. That’s why DeMarcus Lawrence and Aldon Smith and Randy Gregory, they can excel in this defense, because you might get a tight end, or you might have to be on a running back because there’s five guys rushing now instead of four. But they can interchange each one of those guys, and that’s what makes it hard on those offenses… because they can’t block you.

“So, I think with this hybrid-type defense and talking to DeMarcus Lawrence, he’s ready to… ‘Hey, DeMarcus can you maybe come by and show me how to stand up?’ That made me smile (laughs). Because I’ll teach him a little bit of the outside linebacker position, but knowing they’re going to be a little more hybrid style, I think is really going to benefit them.”

Where the Dallas Cowboys dropped the ball with Dak Prescott – Brad Crawford, 247Sports

The Cowboys failed to lock up their franchise quarterback last offseason, and it is coming back to bite them.

The Dallas Cowboys paid several premiere players last summer, ensuring the nucleus of playoff team would stick together for years to come. But they didn’t secure their most important piece, one analyst says, and they’re having to do with those repercussions this year following a career-best campaign from franchise quarterback Dak Prescott.

Prescott, who has said repeatedly he intends on staying with the organization, reportedly turned down a 5-year, $175 million offer this spring. Guaranteed money and number of years lead his bargaining needs. The Cowboys used the franchise tag on Prescott in March, agreeing to pay him $31.4 million in 2020 — the final year of his rookie deal.

“Dallas is paying for a mistake they made a year ago,” ESPN NFL analyst Mike Tannenbaum said Friday on NFL Live. “A year ago, Zeke Elliott with multiple years left on his contract held out. And they rewarded that behavior and signed him and made him the highest-paid running back. They paid a good player in La’el Collins, a good player in Jaylon Smith.

What they’re saying about Dak Prescott: Michael Irvin says he deserves the money and back pay from Cowboys – SportsDay staff

Michael Irvin is one of many that believes Dak Prescott deserves a big pay day from the Cowboys.

Cowboys Hall of Fame receiver Michael Irvin (June 3): “Dak has done everything and he has won. He has won a lot of football games in his first four years. So to say he doesn’t deserve the money isn’t totally correct. He does deserve the money. That’s the market and he’s a starting, winning quarterback in the NFL. It’s just a matter of getting it done. And I think they’ll get it done.

“It’s business. Dak wants every penny and Jerry [Jones] wants to try to save every penny. But usually those kinds of deals, I always tell people, will get done as soon as the slipper falls of Cinderella, 12:01, something will get done. It’ll come in and Dak will be — for a moment — the highest-paid quarterback before Pat Mahomes gets his…

“Dak has been not great, but perfect. Not necessarily in wins and losses, of course. But I’m talking about just the person that he’s been. The kind of investment you want to make, the kind of guy you say ‘yeah, we hit it with this guy. We got him in the fourth round.’ You stole four years, so whatever he gets he deserves because you still owe him back pay.”

Amari Cooper and CeeDee Lamb have received the bulk of the wide receiver hype within the Cowboys, but Michael Gallup is not somebody that should be forgotten about.

In 2019, the Dallas Cowboys led the NFL in total offense. Wide receiver Michael Gallup might not have been the biggest reason for that explosion, but he was most assuredly one of them. In his second year, Gallup doubled his reception total, topped 1,100 yards and scored half a dozen touchdowns.

And he may have just been getting started.

There are a couple of reasons to believe Gallup’s arrow could still be pointing upward. The first is talent—Gallup is a Biletnikoff Award finalist who rewrote the record book at Colorado State. He’s not exceptionally tall or exceptionally fast, but there also isn’t a real flaw in his game. Size, speed, hands, route-running—Gallup has it all.

Then there’s the loaded wideout corps in Dallas. With Gallup alongside veteran Amari Cooper and rookie CeeDee Lamb, it will be difficult for opposing defenses to key on one player. That means plenty of single coverage for Pro Bowl quarterback Dak Prescott to exploit.

Can the Cowboys Secondary be a Unit of Strength This Season? – Matthew Lenix, Inside The Star

If the Cowboys are going to truly compete this upcoming season, the secondary must be improved from last year.

The unit took a huge blow in free agency losing starters Byron Jones and Jeff Heath, making the priority of revamping the secondary even more paramount before the 2020 season kicks off. They started by going back into the free-agent market and added veteran Safety Ha Ha Clinton-Dix, who played under new Head Coach Mike McCarthy for five seasons in Green Bay. Also, they brought in cornerback Maurice Canady who spent 2019 with the New York Jets as a nice depth piece.

In the NFL Draft, the Cowboys came in like a thief in the night and stole ball-hawking cornerbacks Trevon Diggs and Reggie Robinson in the second and fourth rounds. Days later, the Cowboys got more depth when they signed veteran cornerback Darly Worley who spent the last two seasons with the Oakland Raiders.

Now, factoring in these additions plus Xavier Woods, Jourdan Lewis, Anthony Brown, Donovan Wilson, and Darian Thompson the Cowboys are a lot better off in the secondary than they’ve been in a while from a talent standpoint. However, there is something else that could make them even more effective, their retooled defensive front.

Dallas Cowboys: It’s Do or Die for These 5 Players in 2020 – Reid Hanson, SportDFW

The reason this season is so critical for Chido and his future with the Dallas Cowboys is simple: He’s a free agent in 2021.

The Dallas Cowboys have yet to hitch their wagon to any safety beyond this season. Xavier Woods, Ha Ha Clinton-Dix and Chido are all hitting the market next March and any one of them (or none of them) can secure a long-term deal with Dallas if he establishes himself in 2020.

Chido is one of the smartest and most physically talented players on the team but he’s below average in on-the-field play (except for his open field tackling). He’s primed for a breakout if the Cowboys can just play to his strengths.

Just like Byron Jones’ 2018 season where he moved from safety to cornerback in order to salvage his career, Chido has a chance at establishing himself as a pro if he can just put it together here in 2020.

In case you missed it, Danny writes that while the AFC has dominated the Super Bowl in recent history, the Cowboys are one of many NFC squads that can change that.

Looking ahead to this season, it may not appear that the worm is going to turn as the top two teams with the best Super Bowl odds are the reigning Super Bowl champions, the Kansas City Chiefs, and the Baltimore Ravens, who are coming off a 14-2 season with last year’s most valuable player Lamar Jackson.

While they may be the favorites, the next seven teams with the best odds are all squads from the NFC.

Dallas Cowboys (12 to 1) – With a new head coach, potent offense, and a defense with the potential to make plays, the Cowboys once again on paper look like legit contenders. But can they rise up to the occasion when the games mean the most?

What could June look like for the Cowboys? We discuss on Monday’s episode of The Ocho.