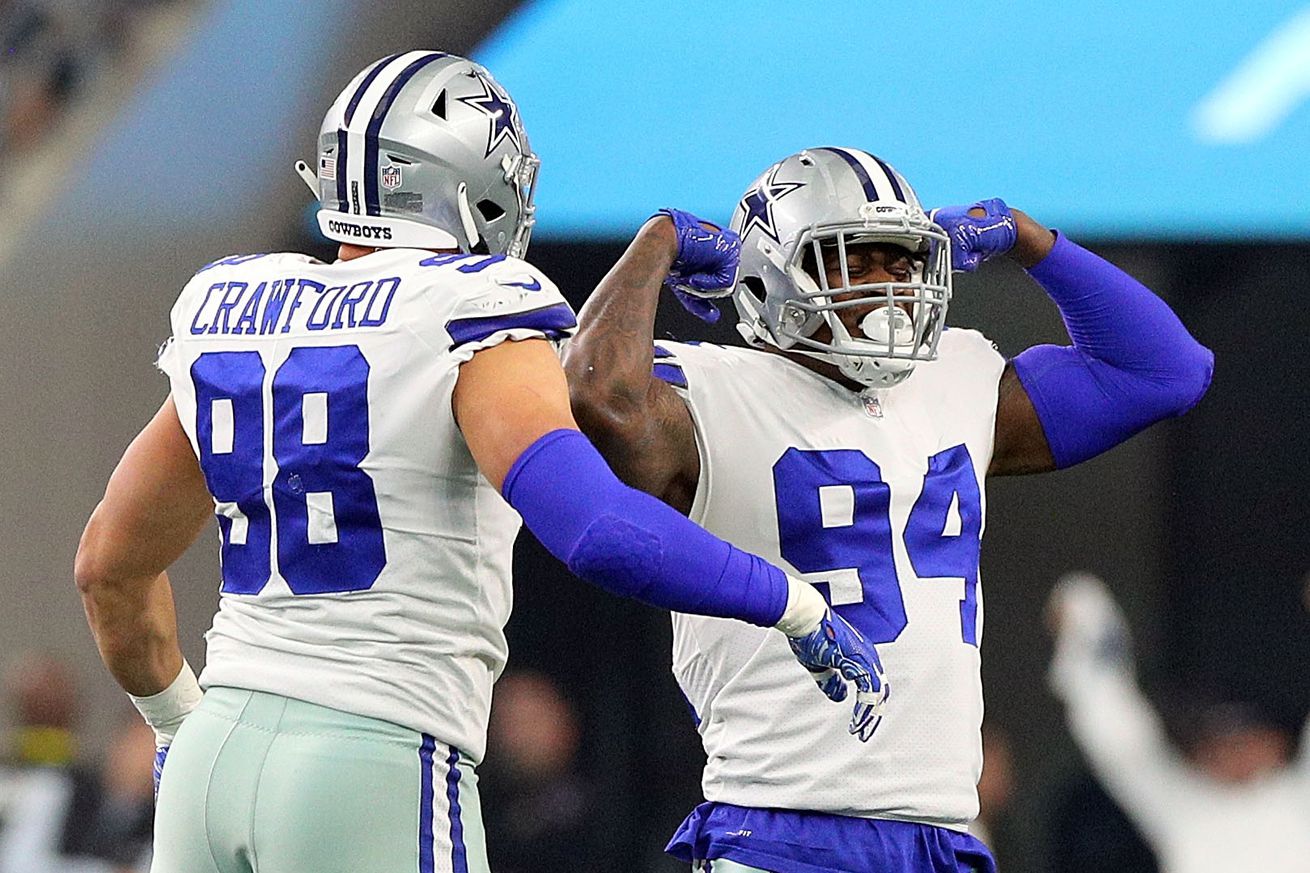 Here is your Sunday’s edition of Cowboys news.

Over at base camp, an examination of how deep the Cowboys edge rushing position is and how we could see quite the battle for a starter’s spot.

It would be great for the Cowboys if the competition for starter is intense, because it would mean that the team could have a deep rotation of defensive ends to play at that spot as well as give Lawrence rest when needed.

There are plenty of best-case scenarios at defensive end when you look past Lawrence. Aldon Smith could recapture some of his former greatness. Bradlee Anae could become an immediate contributor as a rookie. Randy Gregory could successfully be reinstated to the NFL and pick back up where he left off. Tyrone Crawford could return from hip surgery and provide reliable starting-caliber production. Dorance Armstrong could take a step forward in his development. Undrafted free agent Ron’Dell Carter might not only make the team but see actual game snaps.

Realistically, the opposite of all of those things could prove to be true. Smith and Gregory might not successfully be able to shake off the disadvantage of missing full seasons of NFL action. Anae might not be ready to contribute as a rookie. Crawford might not be fully recovered from injury. We might have seen the best we’ll see from Armstrong. Carter might not even make the team.

Who Should Cowboys Name as DeMarcus Lawrence’s Counterpart? – Inside the Star

Which defensive end is best suited to start opposite Tank?

Come on down Randy Gregory!!!

Okay listen, I know Randy Gregory has spent more time in the NFL suspended then he has on the field, however, I believe he’s the most talented pass rusher the Dallas Cowboys currently have on the roster. His length, speed, bend, and ankle flexion sets him apart from Tyrone Crawford and Aldon Smith in my opinion. Those intangibles easily help him capture the edge. I don’t think there’s ever been any question about Randy Gregory’s talent. His downfall thus far in his career, even dating back to college, was his decision to self medicate using marijuana to treat his anxiety. Now that that’s no longer an issue in the NFL, we may now finally see just how good he can really be.

A Panthers site craves some players from the Cowboys, including a nice wild card pass rusher with high upside.

Randy Gregory has shown flashes of brilliance since he was chosen No. 60 overall by the Dallas Cowboys in 2015. This has been followed by a series of frustrating seasons that were littered with lingering injury problems that severely hampered his progress. The outside linebacker didn’t play a down in 2019. But he was given a new one-year deal by the Cowboys in the hope he can put these problems behind him. If Gregory manages to stabilize his career and show his ability to provide useful production. Then Dallas might decide to cash in rather than make a longer-term commitment.

As it turns out, this could be an area of need for the Carolina Panthers if things don’t work out with Jermaine Carter in 2020. Gregory has a nice skillset and the sort of versatility that the Carolina coaching staff has shown a preference for this offseason. Much will depend on how the player gets on in a rotational role. But there is nothing to suggest he cannot bounce back after things looked incredibly bleak at one stage. It’s unlikely that the price would be steep at this stage of his career. But Gregory is entering his prime and is relatively fresh in terms of downs played in the NFL. This represents a bit of a gamble from the Panthers’ perspective. And one that could reap its fair share of rewards.

Mailbag: Who Is The 2nd Best Player On Defense? – Staff, Dallas Cowboys

The Mothership answers questions, including who they believe is the Cowboys second best defense player after DeMarcus Lawrence.

Who is the second best player on defense, and what must Dallas do going forward to be mentioned in conversations when it comes to the top five defenses in the NFL?— BERNARD HENRY / PETERSBURG, VA

Jonny: I am assuming that we’re calling DeMarcus Lawrence the best player on the defense? If so, I would say that a healthy Leighton Vander Esch is the second best player. To be honest, I think quite a bit has to go right for the Cowboys to have a top-five defense. Lawrence has to play like a dominant pass rusher. The linebackers have to stay healthy. And a cornerback has to emerge as capable of covering elite receivers. But I think Lawrence and whoever is starting opposite him will be the key. Getting to the opposing quarterback mitigates a lot of things on a defense.

David: I’m so intrigued by what Gerald McCoy might be able to provide for this group. The Cowboys haven’t had a Pro Bowl three technique since Jason Hatcher posted 11 sacks in 2013. I don’t know if McCoy can hit double digits, but he has averaged six sacks per season over his entire career. That’s going to be a heck of a help for DeMarcus Lawrence. If the Cowboys want to be in the top five, they’ve got to defend the run much better and take the ball away. They didn’t do either of those things in 2019.

Can John Fassel save the Cowboys’ special teams? – Bob Sturm, The Athletic

The Cowboys landed them one of the best special teams coach in the business, but how much difference will he make? One things for sure, opposing teams better be ready for the fake.

Fassel has run 34 since 2008, which is more fakes than any other special-teams coach in the league regardless of how big you want the sample. With Jeff Fisher and Sean McVay, Fassel is No. 1 in the NFL in fakes from 2012-2019. If you measure it just with McVay, it is still No. 1 in the league. If you go back to his time with the Raiders, Fassel was No. 4 in the league. (He would probably tell you that he had an enormous advantage — punters who had been QBs back in high school, Shane Lechler and Johnny Hekker, gave those teams a significant advantage in a category that is still underwritten by luck.) Meanwhile, the Garrett era featured four fakes in almost a decade.

Since 2017, Fassel has called 13 fakes while the Cowboys ran two.

Johnny Hekker, a man of many fake punts for the RamsNFL.

Will we see this in the Super Bowl? (via thecheckdown) pic.twitter.com/tWQiDLL7Nw

Making the team might be a tall task for this undrafted free agent, but he has some traits that appeal to the Cowboys.

McKeon’s opportunities were few and far in between, but when he got the opportunity to catch the ball he did so keeping the rock away from his body well. Most of his work was done as an inline blocker or lined up in the H-back position. He was frequently targeted in the flats and underneath versus zone coverage.

McKeon possess deceptive burst once he gets going, especially on open flat opportunities or tight end throwbacks and screens, something he has had some success executing. Perhaps due to a lack of opportunities, he shows a urgency getting up field quickly to gain positive yards. As a runner he doesn’t shy away from contact and he runs with his pads low helping him to absorb hits.

He has much room to improve as a route runner and often times on downfield routes it seems as if he is running in mud. He is a adequate blocker who can keep his body in between the defender and the ball carrier but the longer he is left on a island the more his lack of strength shows up.

“Please be advised that it is our consensus medical opinion that in light of the increase in Covid-19 cases in certain states that no players should be engaged in practicing together in private workouts,” Mayer said in a statement.

“Our goal is to have all players and your families as healthy as possible in the coming months. “We are working on the best mitigation procedures at team facilities for both training camps and the upcoming season, and believe that it is in the best interest of all players that we advise against any voluntary joint practices before training camp commences.”

Our own Cole Patterson takes a moment to answer questions on Twitter.

Speaking of top five quarterback, things are just going to get better for Mr. Prescott.

We debuted a new show on the Blogging The Boys podcast network this week, and it is entirely in Spanish. Check out the first episode of Cowboys Hoy right here.