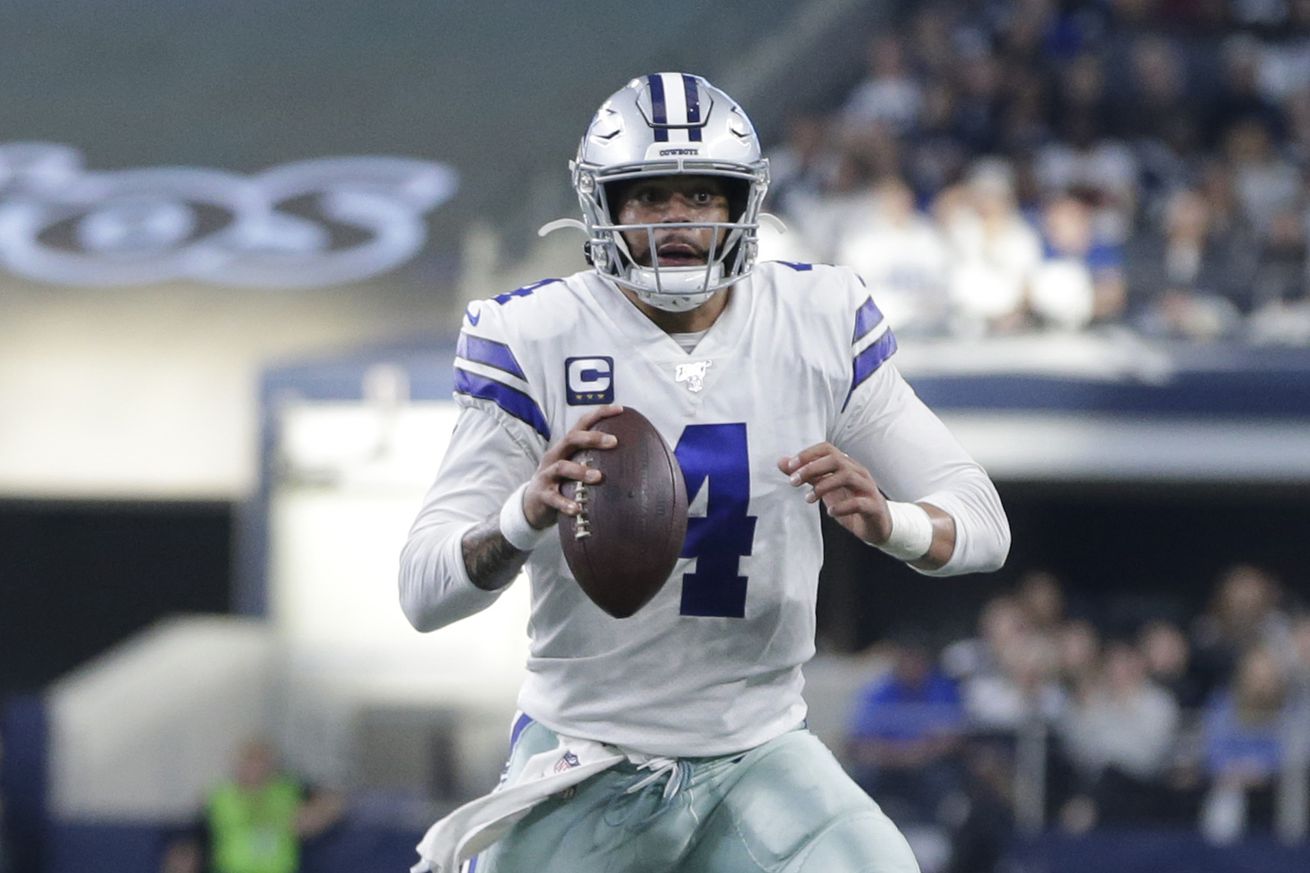 Dak signing is tender is a good thing but what’s next?

“At a time of great uncertainty, this is certainty,” Florio said. “This is $31.4 million that is fully guaranteed, period. There’s not anything they can do about it.”

On the same show, Simms ranked Prescott as the eighth-best quarterback in the NFL, though Prescott is attempting to catch a piece of a quarterback financial market that could be reset by the Kansas City Chiefs’ Patrick Mahomes and Houston Texans’ Deshaun Watson.

“I wouldn’t have signed,” Spears said Monday on Get Up. “I still stand on the fact that Dak is the guy the Cowboys want to have as their starting quarterback. One caveat to my level of thinking — sometimes when we see guys sign these franchise tags, we understand there’s closeness in play of signing a contract.

“I’ve said Dak shouldn’t do a damn thing, but I’m praying it’s something close to being done. I looked at it as when they signed Andy Dalton, Dallas took all the leverage. Dak signing this tender is reactionary. It’s a reactionary move by Dak.”

A move to Dallas won’t be easy, as the Cowboys are going to be up against the cap number. And with Dak Prescott and Dallas reportedly negotiating a long-term contract extension, it’s unclear where Adams is going to get his big payday.

The Jets-Adams breakup has been brewing since late 2018, with Adams openly criticizing the Jets’ roster and the powers that be for having a weak roster devoid of “dogs.” The team went to great lengths to get Adams those “dogs” in Florham Park, signing C.J. Mosley, Le’Veon Bell and Jamison Crowder before the 2019 season.

The relationship between player and team was further fractured around the trade deadline in 2019, when Jets general manager Joe Douglas reportedly answered trade offers for Adams, but put the price so high that he was considered virtually untouchable.

Really, to a certain point, you understand Adams’ frustrations. He’s been a winning player his entire football life, a vocal leader on the front lines of championship-caliber teams through college. Unfortunately, that hasn’t been the case with the Jets, as they’ve finished under .500 for the three seasons he’s been on the team. The Jets are a “maybe” playoff contender for the upcoming season, which clearly isn’t good enough for Adams, whose desire to be traded to a championship contender is apparent.

This award couldn’t have gone to a better person. Congratulations!

The Halas Award is given to an NFL player, coach or staff member who overcomes adversity to succeed. The award is named for a charter member (1963) of the Pro Football Hall of Fame who had a role with the formation of the NFL and owned the Chicago Bears until his death in 1983.

In his retirement announcement, Frederick wrote:

“I started a journey almost two years ago that completely blindsided me. When I developed Guillain-Barre syndrome, I did not know how to handle things. I was scared. That experience forced me to re-evaluate my life priorities. I spent much of that year thinking about both the past and future. I realized how fortunate I was to play a game for a living. I realized how fortunate I was to make friends and become teammates with some great men.

“Most of all, I realized the importance of my family and how much I want to be there for their peaks and valleys as they were for me. . I was ready for the next stage of my life; however, the competitor in me would not accept going out without returning to the field.

“I made my return to the field, played well overall, and was selected to the Pro Bowl, but it was a difficult year for me. Each day, I faced a struggle: I could no longer perform at my highest level. Playing `well’ is not what I expect of myself and is not what my teammates deserve. Because of this, I know my days as a football player are done. I am proud of what I have accomplished in my career, and I walk away with my head held high.”

What Would Be A Successful 2020 Season For The Dallas Cowboys? – Kevin Brady, Inside The Star

There are so many answers to this question, let start with playing football.

Now, though, things are quite different in Dallas. I mean, some may consider 2020 successful if we even have a season at all. But given there is a full 16 game season this Fall, what would make it a successful one for these Cowboys?

Bleacher Report deemed that a trip to the NFC Championship game is what would make 2020 a success for America’s Team. And, of course, it would certainly be an accomplishment we haven’t seen out of the Cowboys for over two decades.

“The team has far too much high-priced talent to miss the playoffs, but even a short postseason run might not suffice considering what Dallas is paying its stars.”

But is the NFC Championship game the line between success and failure this season?

When you look down the Cowboys roster you see stars. Dak Prescott, Ezekiel Elliott, Amari Cooper – just to name a few. But the vast majority of these stars are on the offensive side of the ball. The Cowboys lost two top defensive contributors this offseason in Byron Jones and Robert Quinn, and despite drafting well on both sides of the ball they will be relying on some unproven (or formerly underperforming) talent to get the job done both in the defensive backfield and opposite DeMarcus Lawrence.

For the Cowboys to reach this successful mark, their defensive stars will need to play to their 2018 levels. Leighton Vander Esch will have to remain healthy, Jaylon Smith will need a bounce back year he is certainly capable of, and DeMarcus Lawrence must continue to play to his dominant form.

Kellen Moore is the most important Cowboys coach – Tom Ryle, Blogging The Boys

Moore will be a big part in their success on offense and how far they can go.

It is crucial that Dallas starts winning early, especially as the threat of a shortened season is still very much with us. They cannot afford a sluggish beginning. While all three phases of the game are indeed important, offense is the one that a team has the most control over. Defense is much more reactive, and special teams is to a large degree as well. Only on offense can a team routinely dictate what is happening on the field.

That is a hypothesis that needs a bit more development to show its validity. Fortunately, our DannyPhantom just did exactly that. Here is a pertinent point from his article.

So if the Cowboys want to win games early, they need to score a lot of points. That is on Moore, since defensive scores are rare and much more subject to the vagaries of chance. One of the things that is expected this year is that McCarthy will remove what certainly appeared to be some restrictions on Moore’s play-calling under Garrett. The team was very conservative at times, especially on the road and against the better teams. If that is changed, the offense should be able to live up to its potential.

A way-too-early look at three 2021 NFL Draft prospects that the Cowboys could have on its radar – Cole Patterson, Blogging The Boys

It’s never too early to find the next draft darlings for the Cowboys.

As the NFL trends more and more towards a pass-heavy league, it is more important than ever to have players in the secondary that have the ability to be versatile and makes things difficult for offenses to execute. Brugler has the Cowboys going out to the West Coast and grabbing current Trojans defensive back Talanoa Hufanga to add to its rebuilding defensive backfield.

You don’t need to know Hufanga’s number, just follow the ball and that is where he will be. His aggressive nature will work against him at times, but he competes with outstanding effort and anticipation to make plays versus the pass and the run.

The former five-star recruit flew all over the field for USC last season, making play after play for the Trojans on the way to earning all-conference honors in 2019. Hufanga amassed 90 total tackles, recorded 7.5 tackles-for-loss, made 3.5 sacks, and totaled three pass deflections as a true sophomore.

Hufanga is a tackling machine, recording 18 tackles, two TFLs, and one sack in a game versus the rival UCLA Bruins late last season. He had four other games with at least 10 tackles in a game (three in which he had 14) and had another with eight.

What makes the USC product so intriguing is that he is always all over the field and always around the football. Hufanga possesses the quickness, intelligence, and physicality that would be a perfect fit in Mike Nolan’s defense.

Let’s talk about Dak Prescott, shall we?