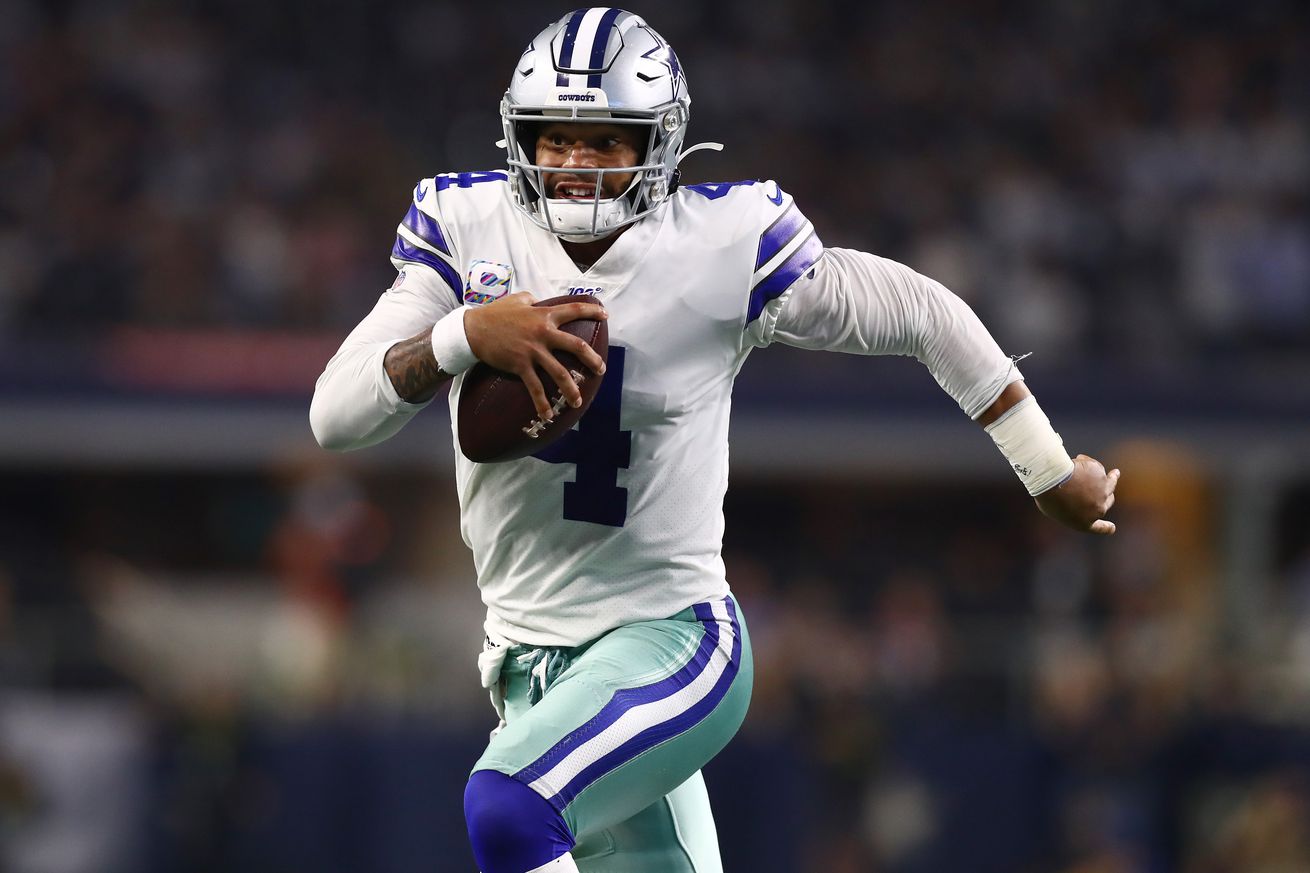 Prescott is dangerous throwing and running the football for the Cowboys.

We are continually closing in on July 15th. It remains to be seen whether or not quarterback Dak Prescott and the Dallas Cowboy will come to terms on a long-term deal, but the hope is that the Cowboys lock up their franchise signal-caller for the foreseeable future.

For the time being, though, Prescott is locked in for the 2020 season thanks to officially signing his franchise tender earlier this week. There is some debate on who holds the leverage in contract talks now, but it has to comfort Mike McCarthy to know that he will have his quarterback in attendance for training camp — not that there was much worry that Dak would skip anyways.

Dak Prescott is coming off his best statistical season as starting quarterback, setting career-highs in passing yards and touchdowns during Kellen Moore’s first season as offensive coordinator. Now with another year of development, the hiring of McCarthy, and the addition of CeeDee Lamb to the offense, the expectation is that Dak and the Cowboys passing attack will continue to put up numbers.

Prescott is also dangerous with his legs. There are some complaints that the Cowboys have not utilized the QB’s legs enough since his special rookie season where he and Ezekiel Elliott torched defenses in the read-option game, but Prescott makes it count when he does run the football.

Dak Prescott is in rare company as a passer and a rusher.

In addition to Prescott’s 30 touchdowns through the air in 2019, Dak found the end zone on the ground three more times to up his total to 33 total scores. As a result, Prescott now has over 20 rushing touchdowns since entering the NFL as a fourth-round draft pick.

According to ESPN Stats and Info, Dak Prescott is just one of seven quarterbacks in league history to ever account for at least 90 passing touchdowns and at least 20 rushing touchdowns in a four-year span during a career. As the account notes, the Cowboys quarterback is the only to ever do so during his first four seasons in the NFL. That is pretty spectacular, no?

Dak Prescott has 97 touchdown passes and 21 rushing touchdowns in his career, the 7th instance of a QB with 90 Pass TD and 20 Rush TD in a 4-season span in NFL history.

Prescott is the only one to do it in his first 4 seasons. pic.twitter.com/lTuZ4crZza

It will be interesting to see if the duo of McCarthy and Moore take more advantage of Dak’s legs in 2020 and moving forward. McCarthy is not known to design run plays for his quarterback, but Moore is one of the young, bright minds in the league and could see the value in giving Dak more opportunities in the run game.

On one hand, you never want to put your quarterback in harm’s way. On the other, there is no denying that Dak has made highlight plays while tucking the football, and the Cowboys finally have a credible quarterback behind Prescott in Andy Dalton.

Dak has made some very impressive plays while running the football during his career in the NFL — his 3rd-and-14 conversion against the Seattle Seahawks in the 2019 playoffs, his stiff-arm on Josh Norman last season, and his ridiculous touchdown versus Washington during the 2018 season are just a few that come to mind. He made some impressive plays on the ground while on the college level, as well:

Regardless, Dak Prescott has had quite an impressive career since taking over as starting quarterback for the Dallas Cowboys. This is yet another stat that backs that up. Now, pay the man!